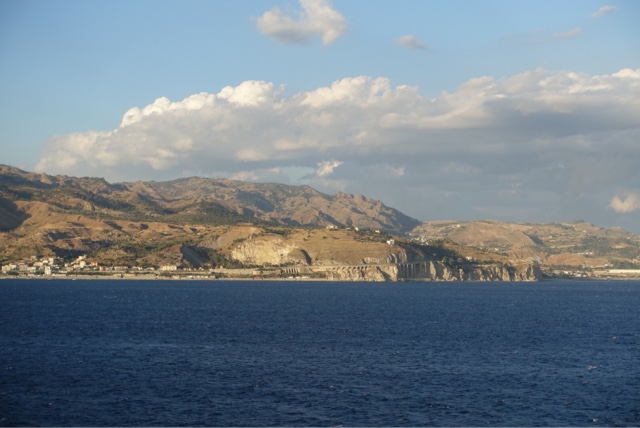 Cruising the coast of Italy this evening
Today was a quiet day spent "at sea". The ship is traveling from Greece back to the west coast of Italy (specifically Naples). Russell and I rented a cabana again today so that we could have uninterrupted stitching time as well as a guaranteed comfortable place to sit (with a view). I think it was worth it. One of the worst aspects of this ship is that there are not a lot of comfortable places to sit and stitch (other than our room and our veranda). So, although it is kind of galling to have to pay for one (a comfortable place to stitch that is) I am glad that there is one and that it was available. 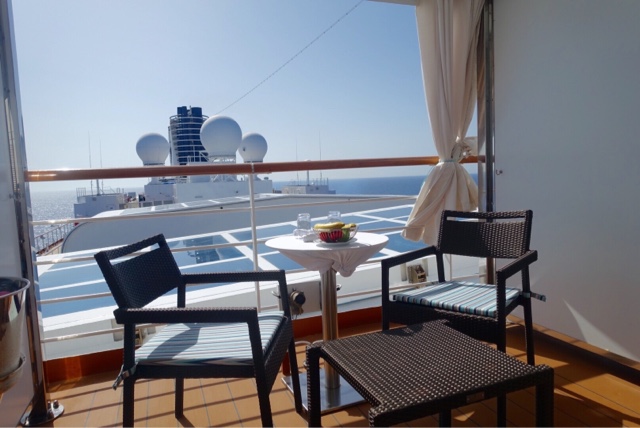 Yesterday we visited Mykonos and at the risk of sounding like Debbie Downer it wasn't all that I was hoping it would be. Now granted I was having ... wait for it ... another thermal breakdown (also know as a heat wave). I had made a vow after the last time I wrote about "the mother of all heat waves" that I wouldn't talk about the subject anymore because it's boring. And it is boring but the fact is that it impacted my mood and subsequent enjoyment (or lack thereof) of Mykonos. 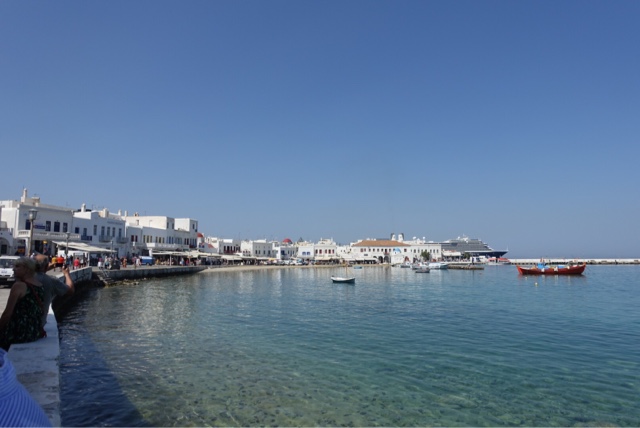 So, in short, I was in a bad mood because I was sweating lots and no amount of fanning or resting was helping. Russell, I have to say, was rather patient especially when I had a little breakdown over posing for a selfie (don't ask -- too stupid). 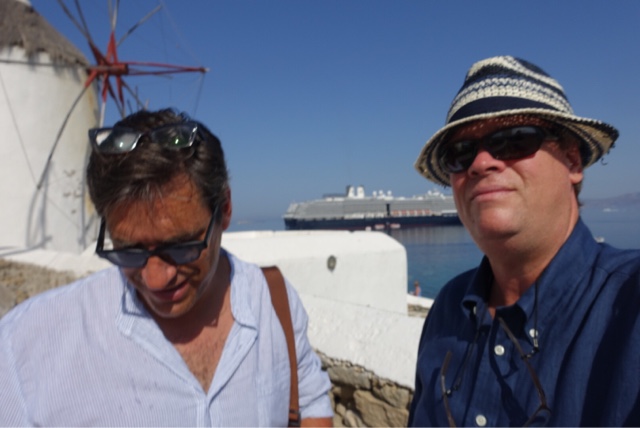 Selfie meltdown
We walked the "streets" of Mykonos Town and the shops were mostly not as high-end as I was expecting (lots of T-shirts, sun hats, swimwear, beach towels, etc.) There were some better stores but with my shirt plastered to my back (and front) and the sweat dripping down my forehead I didn't feel like being on the receiving end of some sales person's dismissive gaze. 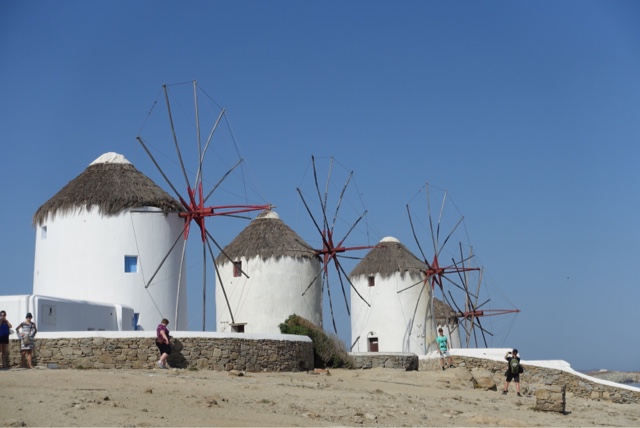 So we dodged tiny cars driving on the sidewalks and smelled plenty of trash (it must have been trash pickup day) and urine before finally calling it a day. We considered going back for the beach. After all, Mykonos is known for its beaches but once I returned to air conditioning I was too appreciative of it to leave. 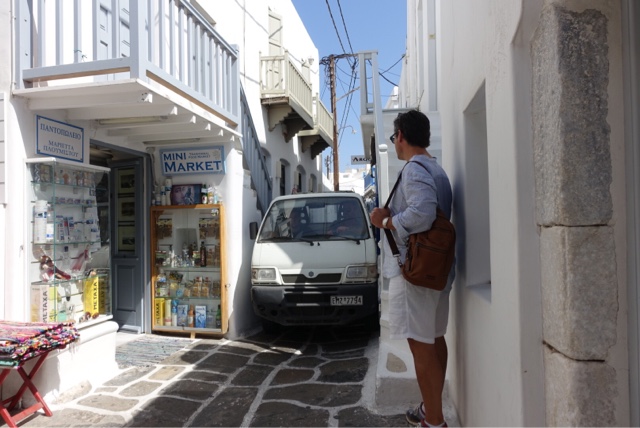 Really?
I think it was just a long week with lots of ports and being sick during part of the week added up to more than I could handle. So don't judge Mykonos from my experience. The place does have crystal clear water and the buildings really are white with blue trim. And there are gay people there (I saw 'em). And stores (such as they were) and restaurants. And of course there are those neat, highly photogenic windmills (see photos above and below). 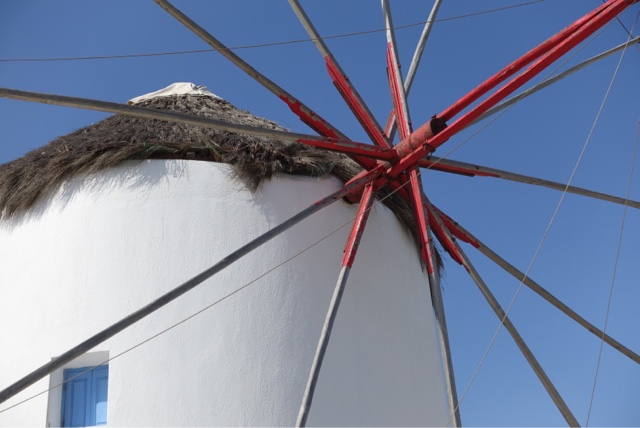 Later in the day, at dinner with some friends, they said Mykonos was their favorite port. Which just goes to prove that one man's poison is another man's pride. Also the very real danger of sweat-induced negativety. 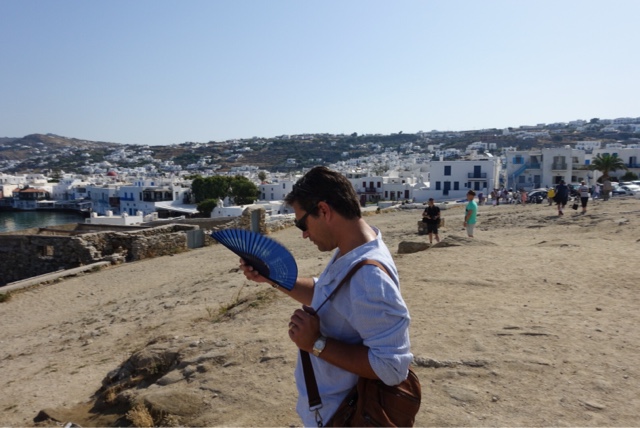 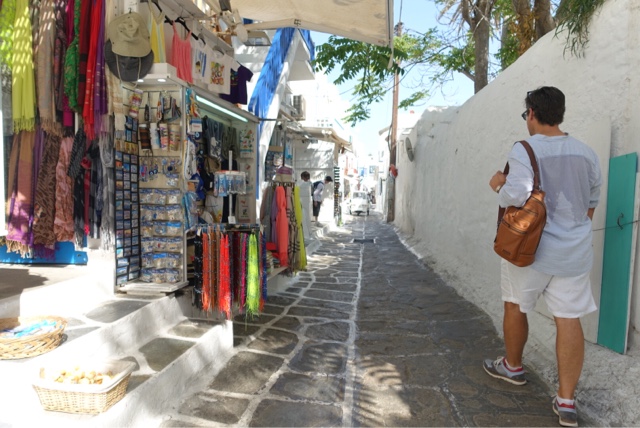 Note sweaty back and determined-to-not-have-fun stride
Posted by Russell at 2:08 PM