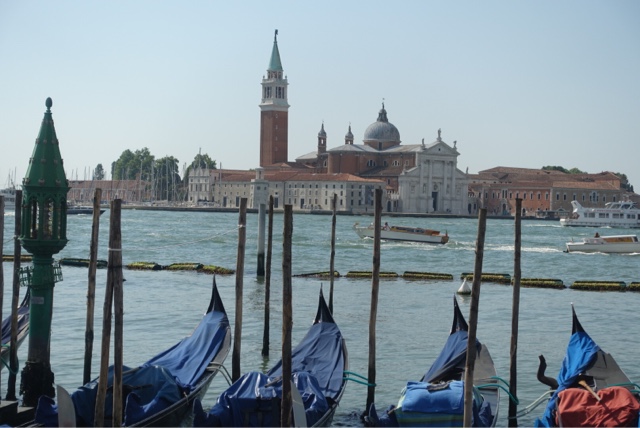 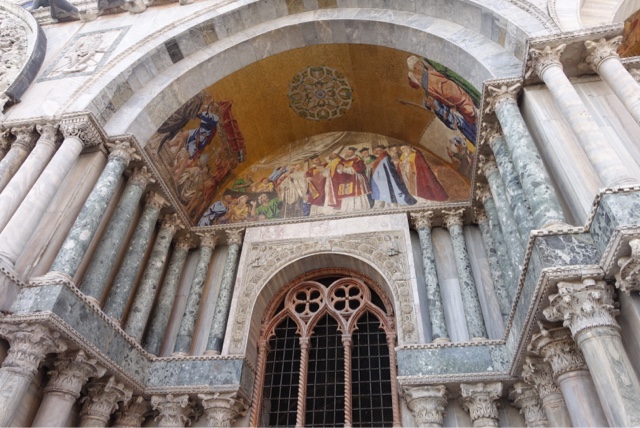 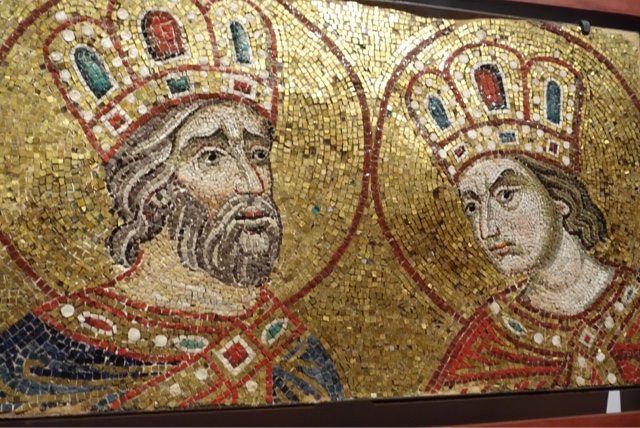 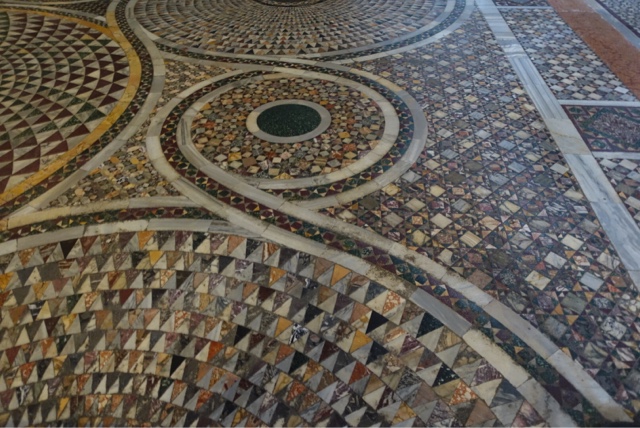 The floors in St. Mark's are incredible!
The tour consisted of an escort to the boat, a boat ride and then an escort from the boat to St. Mark's Square where we were left to do our own thing for two and one half hours. Later we did the whole procedure in reverse arriving back at the ship at around one in the afternoon. 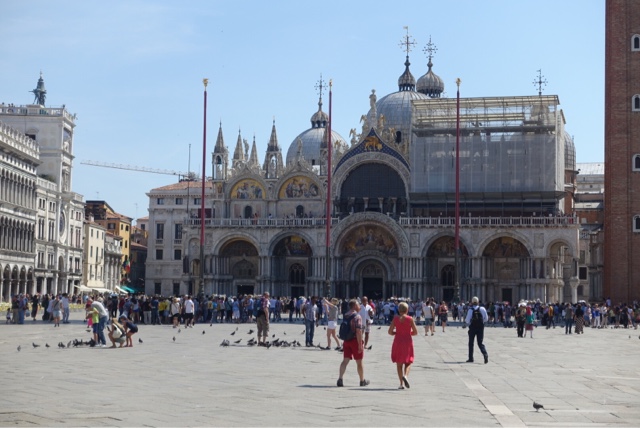 St. Mark's Basilica was closed when we first arrived in the square. We got on line and waited a good half hour before entering the sanctuary. Russell and I made a beeline for the second story roof terrace that provides great views of the square as well as the lagoon. Fortunately when we were out on the terrace pretty much no one had finished with the church yet so we had the place nearly to ourselves. 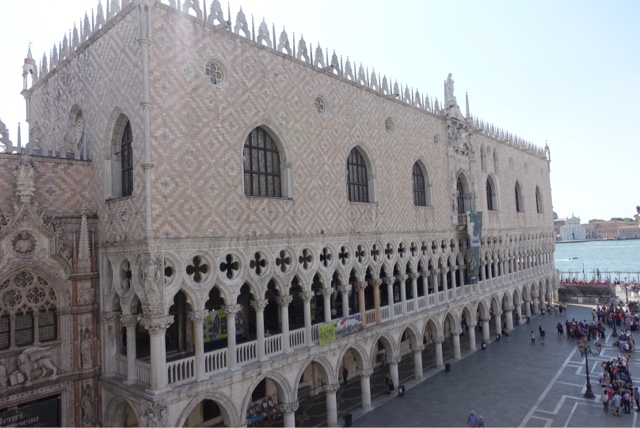 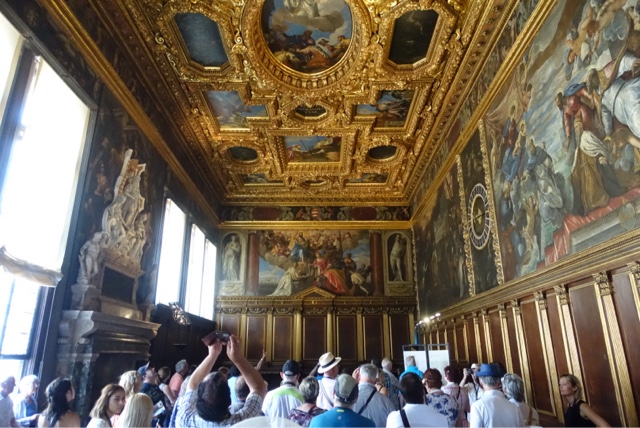 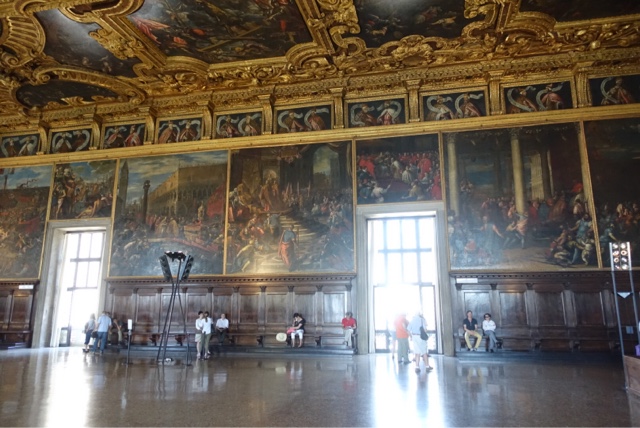 "Now those are some ceilings!" so says Russell upon seeing the Palazzo Ducale
R & I visited Venice once before via train. We did a day trip to Venice from where we were staying in Bologna. As I recall, it was awfully crowded and hot and we did very little aside from a brief trip down the Grand Canal and grabbing a coffee in St. Mark's Square.
Today we did a bit more, going inside the church and also visiting the Museo Correr and the Palazzo Ducale. We really did not have the proper amount of time for these last two visits and might have been better served by skipping them in favor of having a coffee at one of the cafes in the square.
Still, the Pallazo Ducale was quiet stunning and I am not sad that we sprinted through with our track suits on repeating all the while that some Palazzo Ducale is better than none at all. 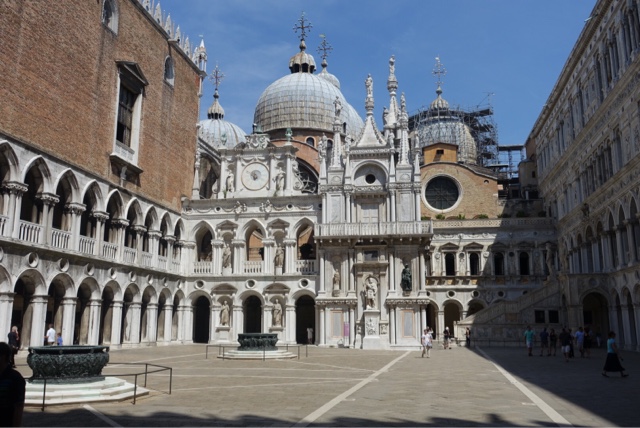 View of St Mark's from inside Palazzo Ducale
Eventually it was back to the ship and one final emergency muster drill before departing at around four in the afternoon with a largely new set of passengers aboard. 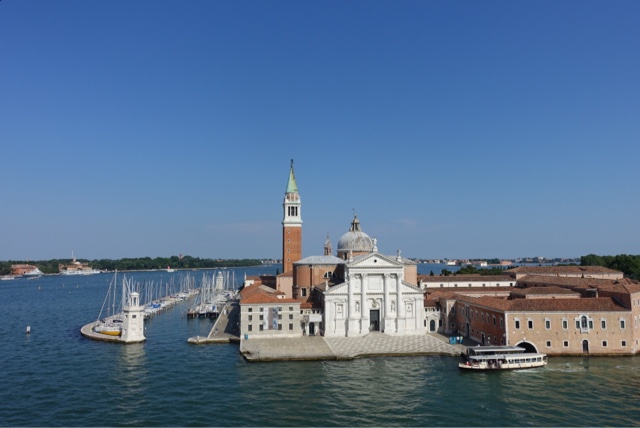 San Giorgio Maggiore Church
I was happily surprised by Venice. I had anticipated the worst -- huge crowds and no chance to see much of anything. Not only were the crowds manageable but we were able to see some stuff in the limited time that we had.  Now we know that we need to devote several more hours to the Palazzo Ducale the next time we are here and I feel confident that there will be a next time. There is much more to see in Venice and the city has charmed us as it has charmed many before us. 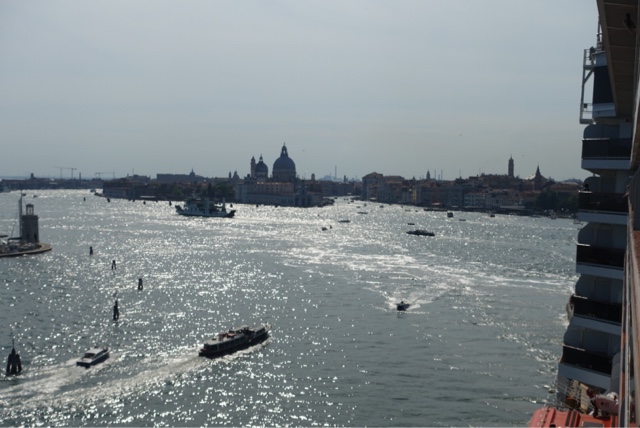