We had a very Roman day today. What do I mean? Well, we visited some of the classic sites of Rome today. Specifically we followed Rick Steves' "Heart of Rome" walk from his Rome guidebook which I had downloaded onto my phone before leaving Delaware. 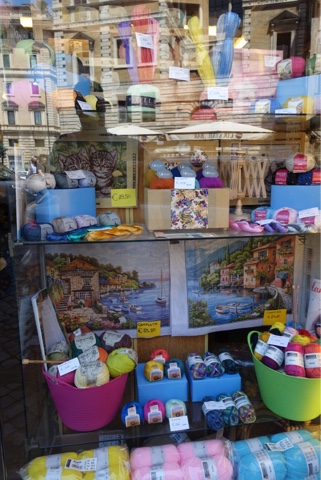 We found a knitting and needlepoint (such as it is) store today
We had a bit of a late start. I guess we both were determined to take advantage of the fact that we had nowhere to be at any particular time today. So, once we were up and ready to head out the door, we had to get ourselves to the starting point (Campo De'Fiori) of the walk which was a good three kilometers from our apartment. I was determined to use my map and therefore not run up roaming charges on the phone by using the GPS. Well, negotiating Roman streets is not easy let me tell you. First of all, they've never even heard of a grid (or a straight street for that matter) and add to that the traffic and the uneven pavement plus my short term memory difficulties and well it all adds up to plenty of "Where are we?" moments. When we found ourselves about to cross the Tibur when I knew all too well that wasn't something we wanted to do, I called in the cavalry -- in the form of Google maps, that is. Honestly, I am still not sure how we got to that riverbank when only a minute or two earlier we were doing so well (or were we?). 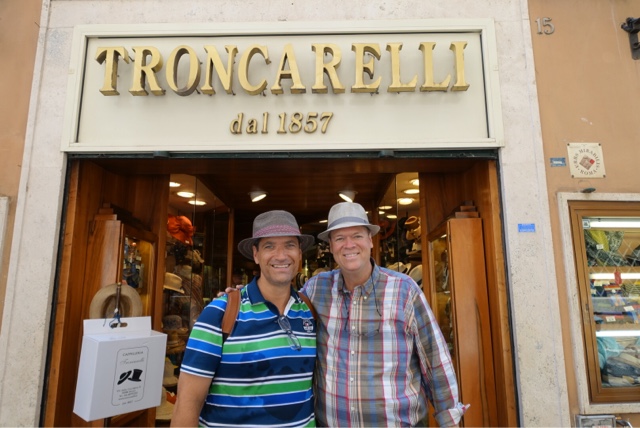 Bought new hats
Well eventually we made it to the Campo De'Fiori and there was indeed a market there. Picturesque I suppose but it didn't feel as genuine as the one we saw in Testaccio. From Campo De'Fiori we walked to Piazza Navona where after admiring the Four Rivers Bernini-designed fountain we stopped for a little lunch (yes, I know -- "Already?"). I had spaghetti with olive oil, garlic and red pepper flakes. Delicious. Plus a six euro Diet Coke. Not so delicious. 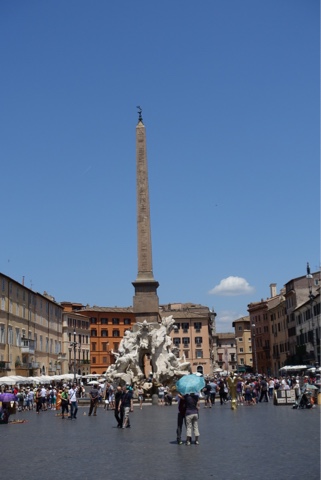 Piazza Navona
After lunch we stopped at the Pantheon (more interesting from the outside than the inside) and the Trevi Fountain which although undergoing a thorough renovation can still draw the tourists in big numbers. Same too with the Spanish Steps -- crowded despite the fact that you cannot see the Baroque church towers at the top of the steps. Of course it really doesn't matter whether these sites are in the best condition or not because visitors to Rome are going to go to the Trevi Fountain and the Spanish Steps because they are in Rome and that's what you do when you are in Rome. Which, come to think of it, is exactly what we did and why. 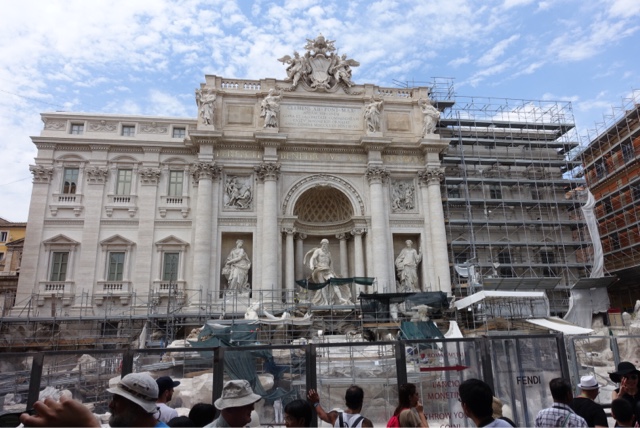 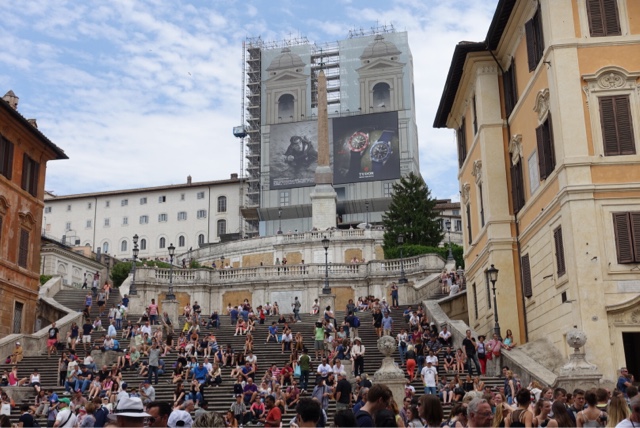 Spanish Steps
Our walk concluded with a stroll through the Via Condotti area which is where the expensive stores are located. We took a cab back to the apartment and had dinner at a local place called Luzzi's (we ate there the other night too). Nothing fancy just lasagna and roast chicken.  Then needlepoint and watching "Looking" on the computer.
Posted by Russell at 3:16 PM