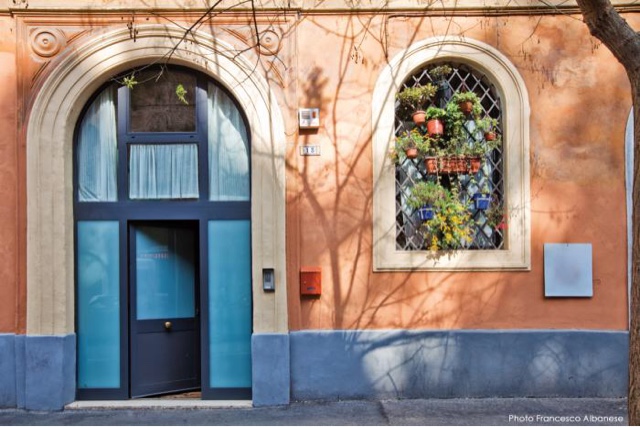 This is a photo from the website where we rented the apartment. What it doesn't show is that there are tables underneath that window from the next door restaurant which is also not in the photo.
So, we've arrived in Rome. The car service picked us up and transported us and our luggage in time enough to meet the apartment owner. We went over a few details, paid, got the keys and once we said our goodbyes we had a chance to check the place out. First impression? The place is darker than I had thought. Secondly the street is busier and louder than I had hoped (there is a bus stop right in front of the apartment and a restaurant has tables nearly up to the front door). As Russell said this afternoon, "If you are not a city person you would have a real hard time with this place". He's right, it's loud. 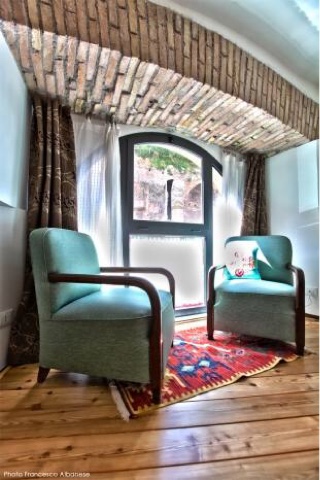 We had hoped this would prove to be a good needlepointing spot but the chairs are thrift store finds with seriously uncomfortable cushions (we are getting used to them though)
Positives? The bathroom is new and the place was clean. It cost less than we thought it was going to, so that was good. And it includes wi-fi so we won't have any issue with posting the blog or receiving email. Also there is a place I can go running nearby. 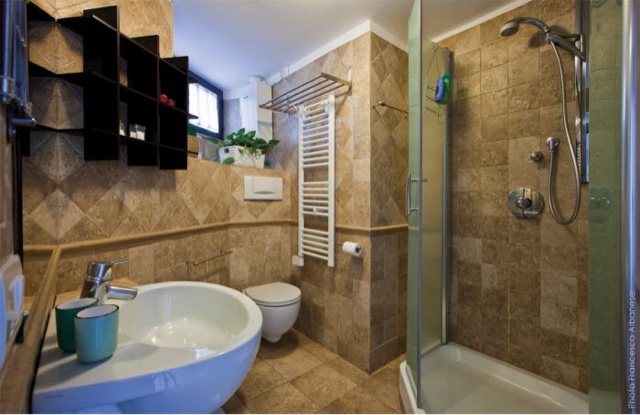 Bathroom is new-ish and shower is larger than on the boat
Some of my initial negativity was no doubt related to the shock of returning to the real world after life on the cruise ship. Also my grandiosity gets in the way. Is this place the Ritz? Absolutely not but it's not the "pits" either. Fact of the matter is that it's in that vast middle space between the two extremes and it will work fine for us. But in some ways it's a challenge and that's okay. In fact it's  more than okay it's really good for us-- pushing ourselves and all that.
We had dinner last night at a local tratorria called Luzzi's. It was good food and reasonably priced but certainly nothing fancy. After dinner we walked around the Coliseum pinching ourselves that we were in Rome. 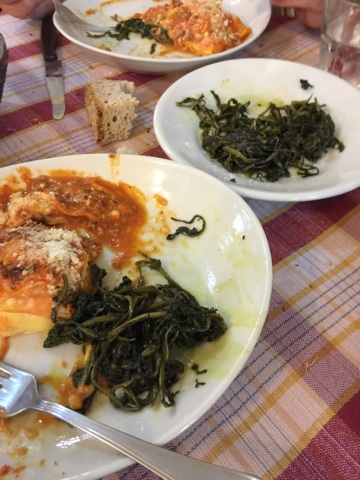 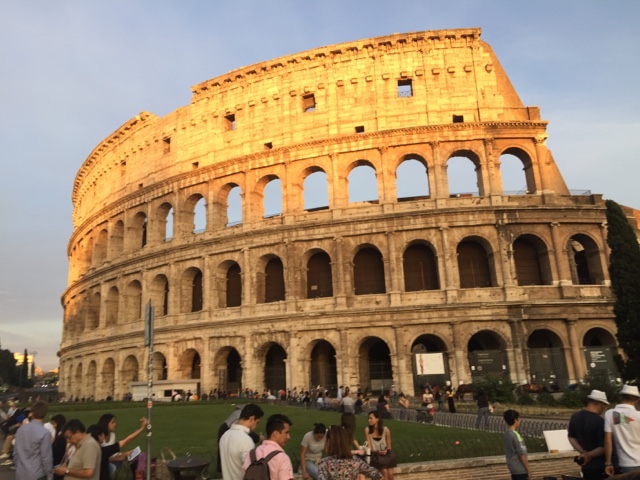 Coliseum after dinner, first night
We were up and out relatively early today (9:00 am) for a walk to our meeting point for the first of two food tours that we will be doing while in Rome. The neighborhood we explored today was called Testaccio and our leader was Sebastiana. We had a fairly large group (I thought -- 10 people) even though two people didn't show up. We also had a long list of places to visit -- seven different locations (and we got food to sample at each one -- yikes!). 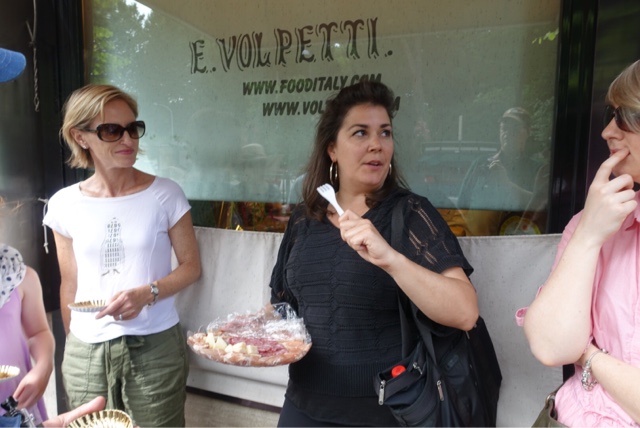 Our guide -- Sebastiana from Sicily and America
My favorite stops included Volpetti's which is a salumeria (they sell cheese, prepared food, prosciutto, oils, vinegars, etc.). The place is a Roman institution and we sampled fantastic sheep's milk cheese flavored with truffles and also San Daniele prosciutto that was melt in your mouth delicious. Another favorite spot? In the Testaccio market we visited a vendor who sells cannoli that are not like any cannoli I've ever eaten. The pastry shell was a revelation! Last stop on the tour? A real gelato maker of course. Apparently 85% of the gelato sold in Rome is "fake" (meaning it is made from a powdered mix). This place was family owned for over a hundred years and featured flavors such as almond, tiramisu or my favorite-- crema (think French Vanilla seasoned with orange rind and cinnamon). Oh, I almost forgot to mention our pasta stop where we ate classic Roman dishes such as Amatriciana, Carbonera and Cacio e Pepe (Romano cheese and black pepper). Oh my gosh it was all so good and we even managed to avoid getting soaked by an early afternoon thunderstorm. 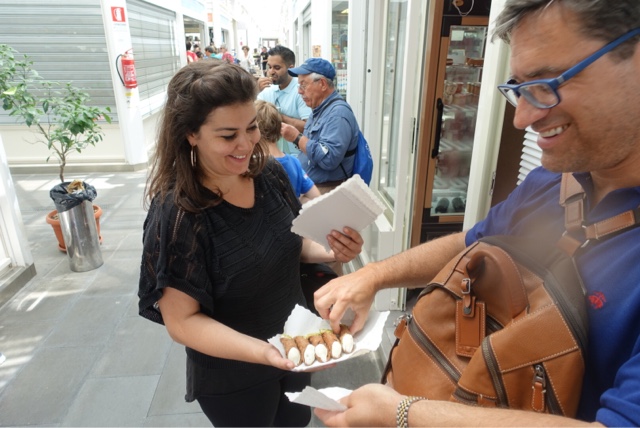 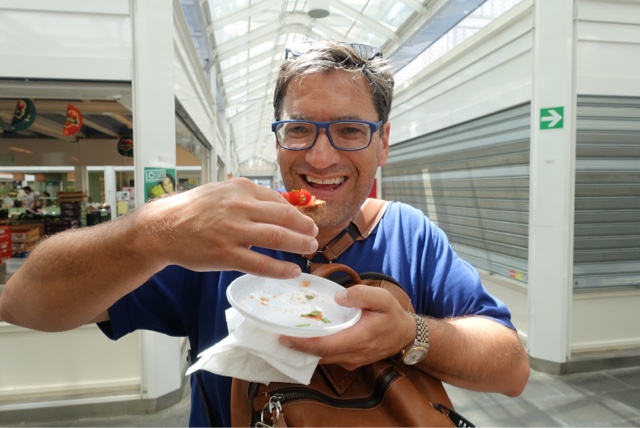 I'v got the backpack in front of me so I don't accidentally bump into people in the crowded marketplace
After the tour Russell and I went back to a couple of the stores and picked up some dishes for dinner at "home". Already the place is seeming more familiar though not a whole lot more comfortable (see caption re. needlepointing chairs).
Tomorrow we have a long tour of the Coliseum, the Forum and Palatine Hill (all ruins). The tour is for five hours (with a short break) so I am thinking I might have been overly ambitious with this one! I'll let you know.
Posted by Russell at 1:41 PM