Well, we visited the Vatican today. My oh my that's all I can say. No, wait -- I can say more. 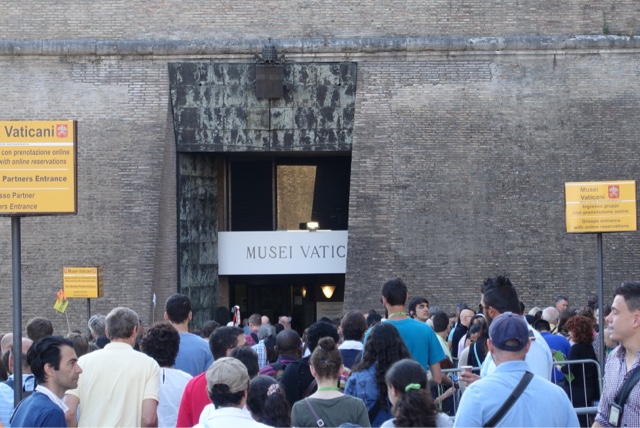 We got up and out early (7:00 am) so we could join the hundreds of other people who paid more to access the Vatican Museum before it opens to the public. Supposedly our tickets entitled us to "skip the lines" but in reality that wasn't true because we got there at seven thirty five and the museum doesn't open until eight so that's a good twenty five minutes of waiting. Then there is the security line. And we had to wait while the guide bought our tickets. 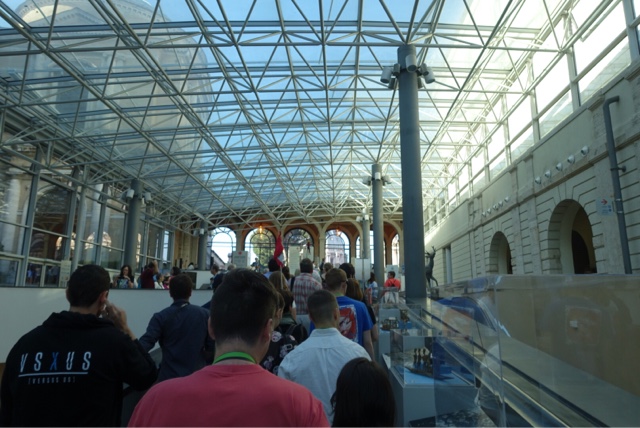 And then once all those things happened we waited some more while our guide explained some background information to us. At the time I thought she was crazy but then I looked at my watch and it was approaching eight thirty so it would seem that the Sistine Chapel itself doesn't open for another half hour after the museum opens. So, if my math is correct it was more than an hour of waiting and still no Sistine Chapel. But finally after going up steps to go down steps and around this corner and down this hall we were there and wow! Amazing. 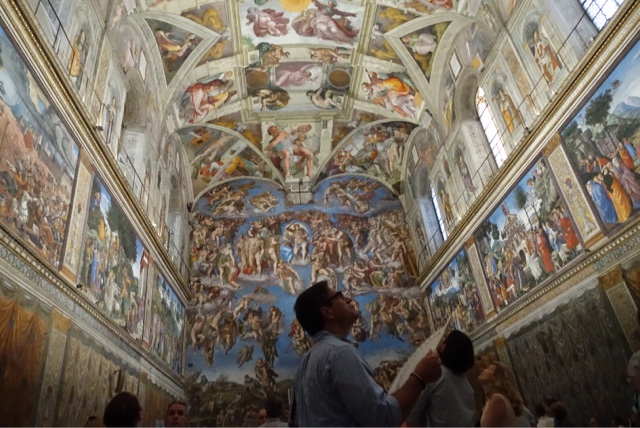 You are not supposed to take pictures in the Sistine Chapel but unbeknownst to me Russell was clicking away like a mad man. I almost feel like a co-conspirator using them. But you don't have to worry -- there is no such thing as a co-co-conspirator!
Of course it was crowded as I knew it would be but the guide assured us and she was right that a lot of the groups would leave quickly and by the time nine o'clock came around the place was not that crowded at all. 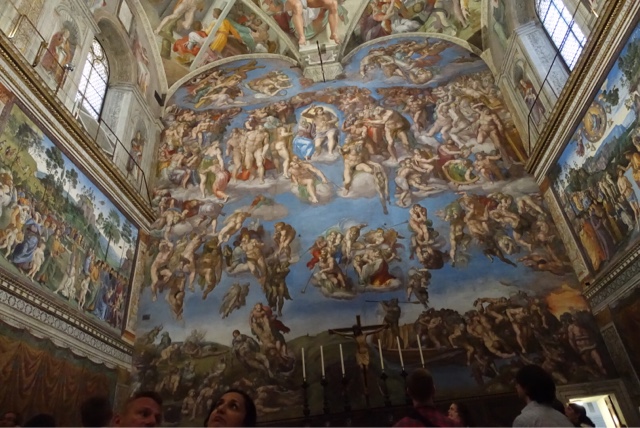 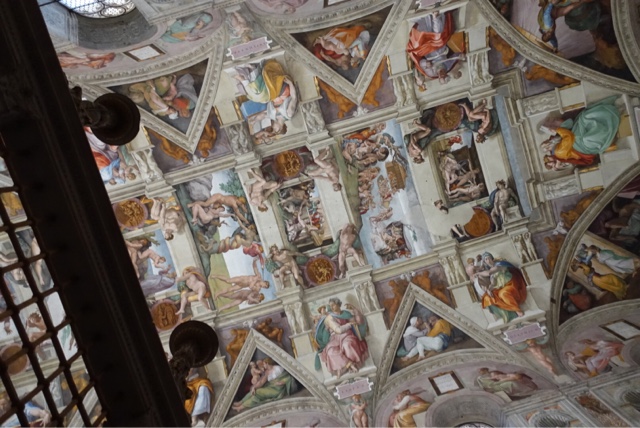 So what to say? Well, there is certainly nothing like being there. And it was bigger than I thought it would be but smaller than Russell thought it would be. The colors were quite vibrant and interestingly they left some sections uncleaned so that you could get a feeling for how it looked prior to the restoration. Also I didn't know that the ceiling was damaged by an explosion that happened nearby in the nineteenth century I believe. So, there is one part of the ceiling that's been lost but it's not too noticeable. What is interesting is to see how Michelangelo divided the space up, creating panels in the center complete with lots of trompe l'oeil architectural details that are so realistic it's hard to tell the real moldings from the fake (I suppose that's the whole point, right? Duh). 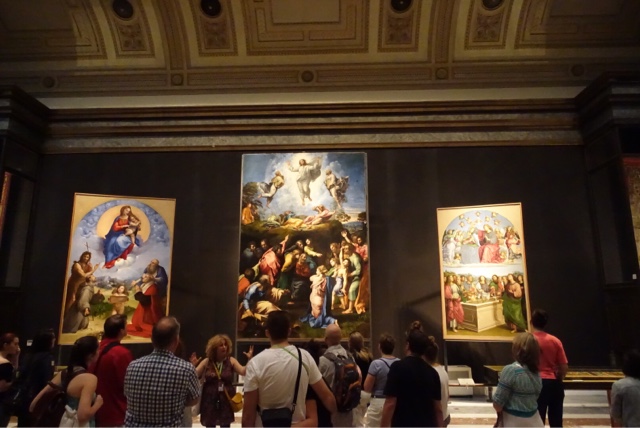 Of course it's difficult to strain your neck and look up for an extended period. Fortunately we were able to sit down for awhile. Toward the end of our visit some guy announces over a microphone that this is a place of worship and then he starts droning on in some language I don't recognize and I think "Will you please be quiet" and "Really? A house of prayer? Tell that to the thirty thousand people who will be paying 16€ to stroll through here all day long." I mean honestly it's not like there are pews or kneelers or anything of the sort. To me this showy attempt at prayer was really all about the Church trying to establish control over the situation and reminding people of just who sets the rules. Oh and speaking of rules -- no exposed shoulders or knees. Can you imagine? What is this the 1950s? Or should I say 1850s? I had no idea knees and shoulders were so ... offensive. 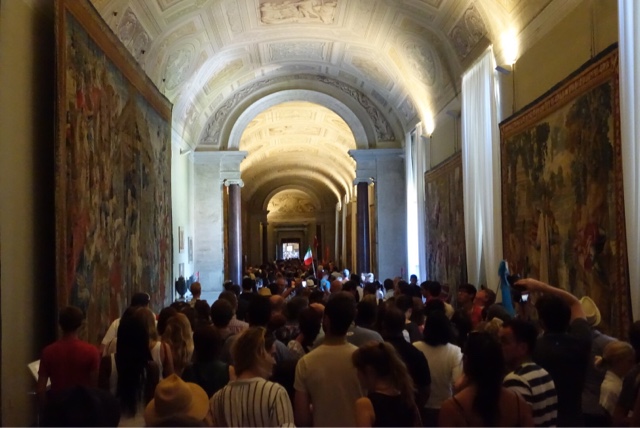 Well I better stop before I offend too many people (especially since I have another zinger to dispense later). The organized prayer initiative does bring up some interesting points. How do the art enthusiasts and the true believers manage to co-exist on such a scale as this? It's an issue at churches all over Italy of course. But it's at a whole different level at the Vatican. Another interesting question is does the fact that the Sistine Chapel is great art help or hinder when it comes to fulfilling the mission of church art which I assume is to bring the faithful closer to God? In short, does artistic greatness bring people closer to God? I would be inclined to say yes but then the memory of what the chapel looked like later in the day (we had to walk through it again to get to St. Peter's Basilica) when it was wall to wall people pops into my head and I think "Ain't nobody getting spiritual in that mob scene." 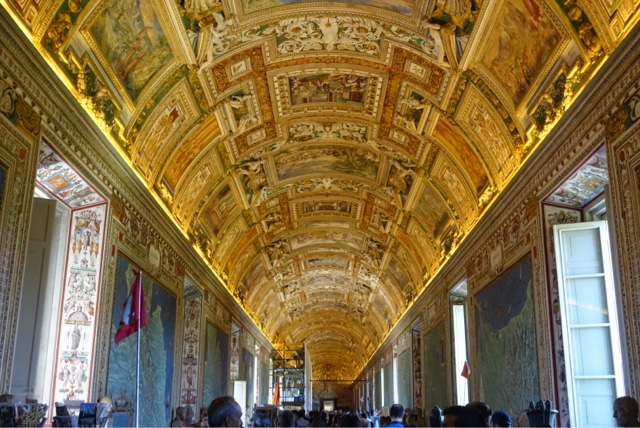 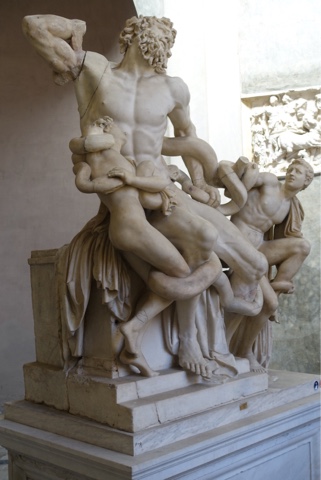 The mob scene was certainly an interesting aspect of the day and surprisingly it would come and go. For instance Russell and I took a few moments during our breakfast break to visit the cars and carriages area and there was no crowd there. And when we went through the picture gallery also very light crowd-age. However on the Belvedere gallery (famous sculptures) and in the Raphael rooms (frescoes by Raphael) the crowds returned. And then of course in the Sistine Chapel and again  in this one corridor on the way to the Sistine Chapel the crowd was very bad. Of course that didn't prevent some jugheads from pushing their way through the crowd. I guess they really really needed to get to the Sistine Chapel. Unlike the rest of us. Honestly some people! 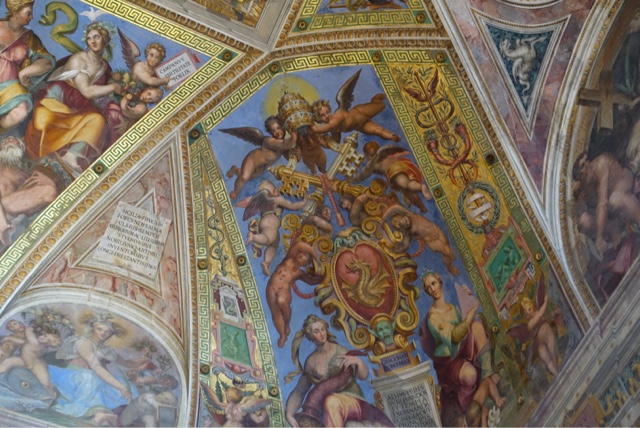 Anyhow the Vatican Museum was very impressive. There is a lot there and it seems from what I saw to be very well displayed and cared for. As for St. Peter's there isn't much to say except that it's big -- as in monstrously large. Also, I now know where all the marble in Rome went! I was surprised to see a crypt for John Paul II inside the basilica on the main floor no less. Prime real estate. I had no idea the mania for that guy had reached such an absurd level! Yikes there it is -- the other zinger that I said I had up my sleeve. 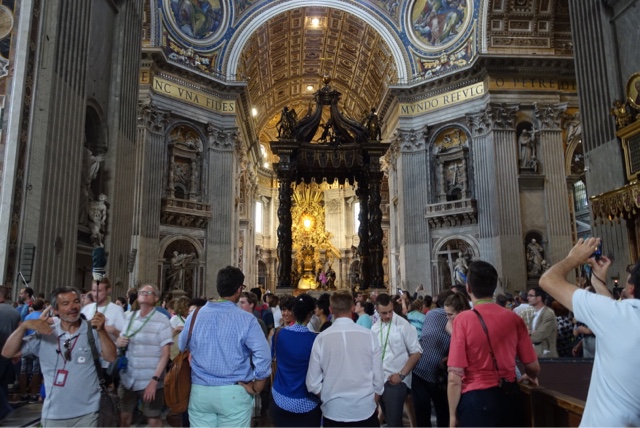 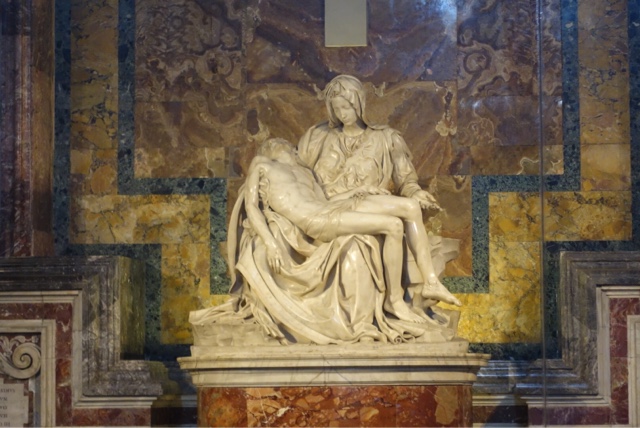 Seriously though the church is really just big. Very very big. And that kind of seems to be the whole point. There are marks down the main aisle to demonstrate how all these other large churches could easily fit inside this church. Because it's so big. Okay I get it. Enough already. 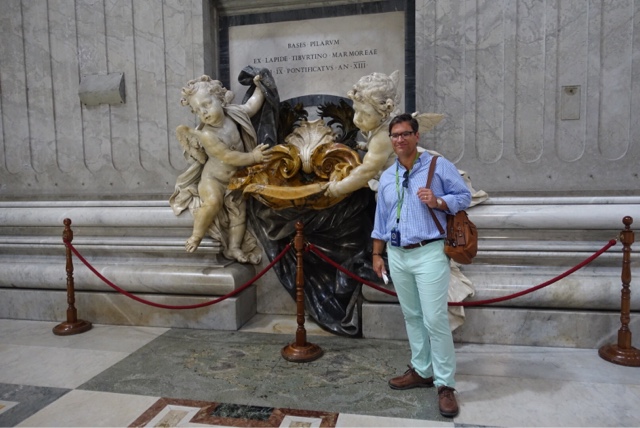 Now that's a big cherub!
Strangely St. Peter's Square didn't seem quite as large as I had expected. Of course having just been inside this enormous church what's an obelisk and two fountains? 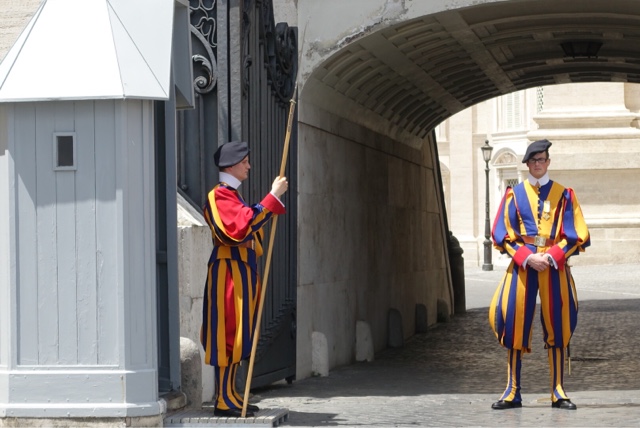 You will see from the pictures that of course the square (which isn't a square at all but rather an ellipse attached to a trapezium -- put that in your pipe and smoke it!) is quite large. 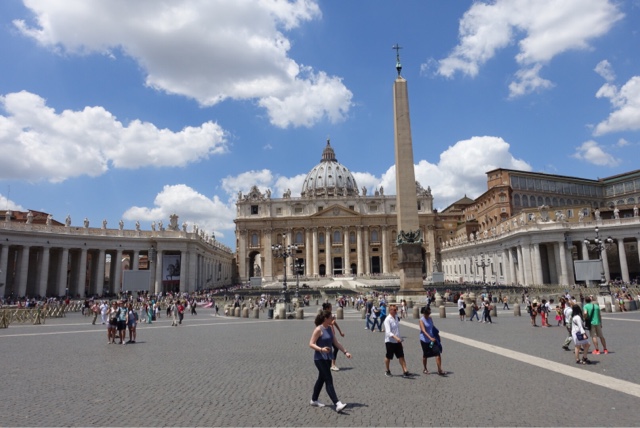 Speaking of quite large -- this blog post is getting out of hand. So I better bring it to a close. More tomorrow.
Posted by Russell at 3:38 PM