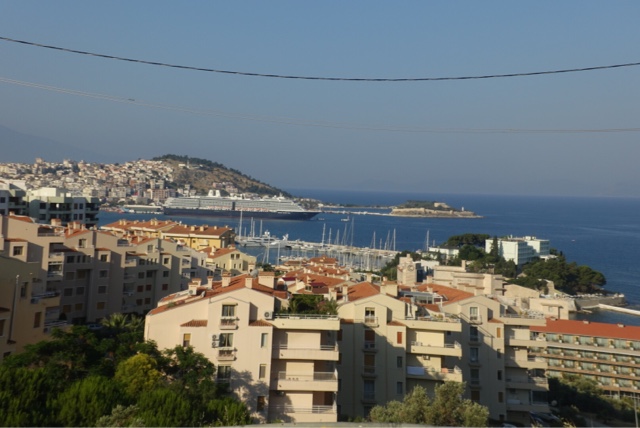 If I had the proper software obviously I would "erase" the power line but I am afraid you'll just have to deal with it.
Docked in Kusadasi, Turkey early this morning to visit Ephesus today. This was my first visit to a predominantly Muslim country (95%). Hearing the call to prayer this afternoon was strange -- different and atmospheric. Kusadasi itself doesn't have much of a Muslim appearance. It's quite modern with new condominiums and surprisingly well constructed roadways. It's a beach/summer community fortified with a strong dose of cruise ship passengers coming to see the ruins. 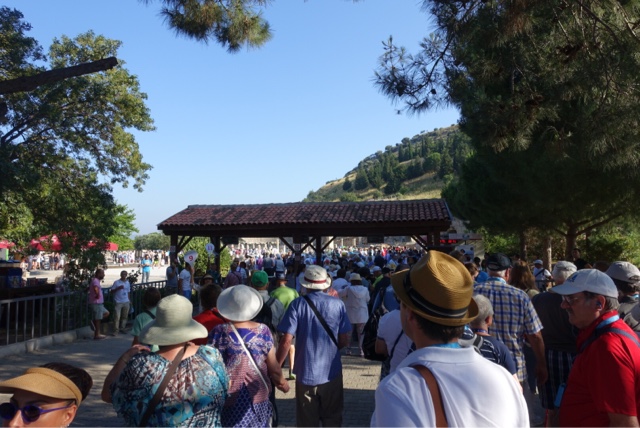 Arriving
The ruins at Ephesus are multilayered. On top you have Byzantine. Underneath are the Roman ruins and still further down the Greek remains. For the most part what we saw dated to the Hellenistic and Roman periods between 300BC and 400AD. 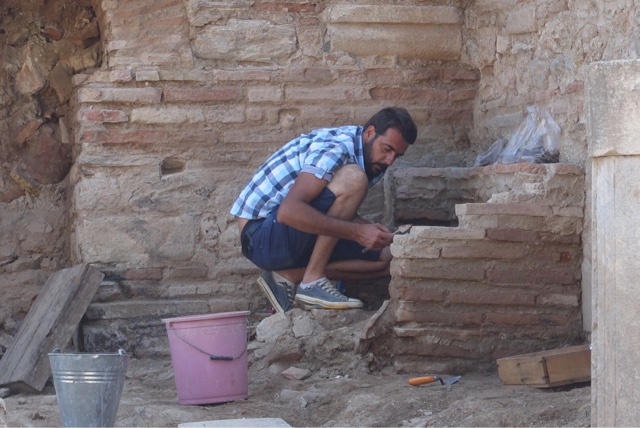 Still lots of work to be done
At one time Ephesus was one of the largest cities in the world with almost a quarter million inhabitants. Needless to say the ruins' area is large even though less than ten per cent of the city has been unearthed. You definitely get the sense that there was a city in this place complete with stores, homes (of various sizes), Roman baths, roads, public toilets, stadium, temples/shrines, a library, burial grounds, etc. 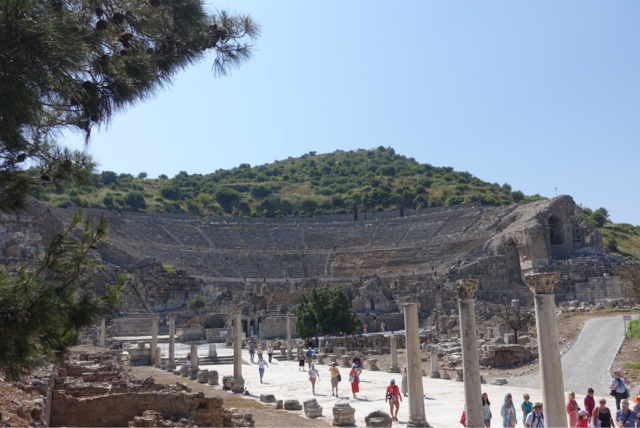 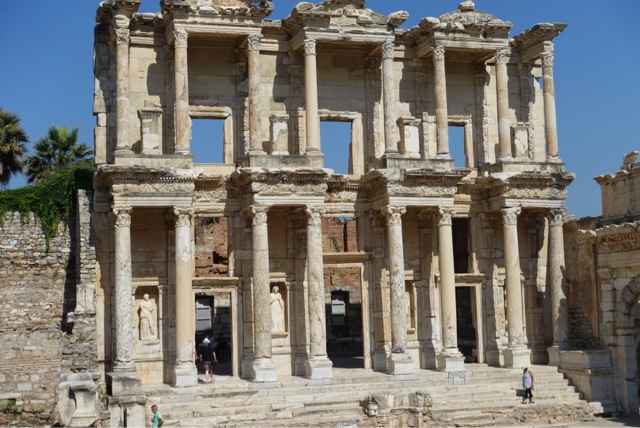 Library at Ephesus
Our guide was okay but he liked to say "Excuse me please" when he really meant "Look over here" but his favorite phrase -- which he must have repeated several hundred times -- was "Ladies and Gentlemen". Sometimes, if we were really lucky, we would get them both, as in: "Excuse me please Ladies and Gentlemen". It was annoying. So too were his sexist jokes and exclusively heterosexist world view but we will not go there. 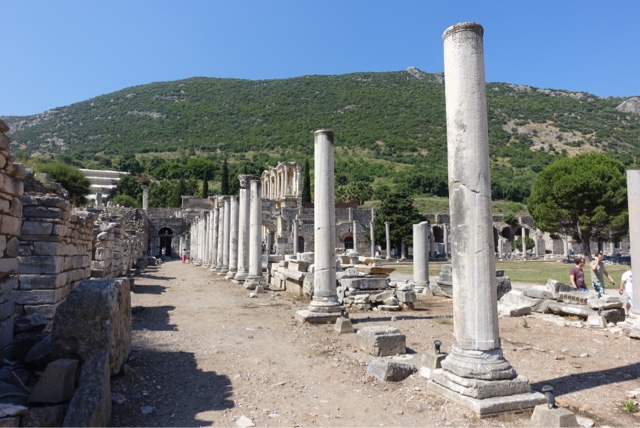 Agora (I think that's what the tour guide said) 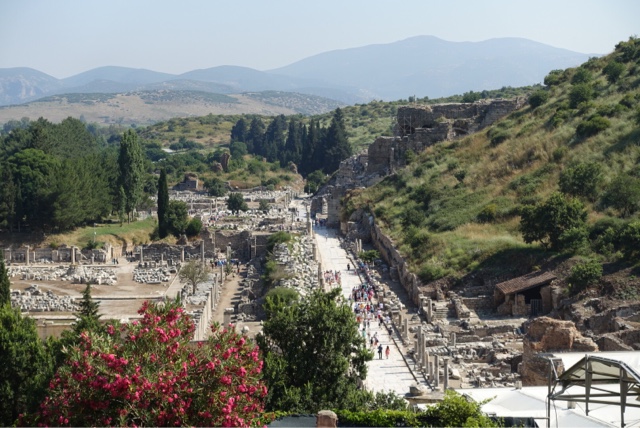 Lovely setting -- pomegranate shrub lower left.
Poor Russell has caught my cold so he was really suffering today -- in the sun with all those ruins and the "Ladies-and-Gentleman-Excuse-Me-Please". 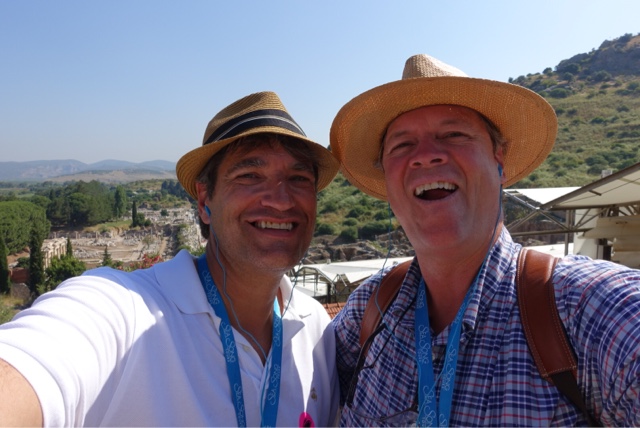 Putting on a good face for the camera
In the parking lot it got worse. "You want Turkish Viagra?" or "Genuine coins?" or "You want book on Ephesus?" (Not sure how they pegged me for that one. I must have made the mistake of glancing ever so slightly in the direction of some books. I am telling you these guys are good). When we were returned to the pier Russell and I made a beeline for the ship managing to escape the Turkish carpet-making "demonstration". 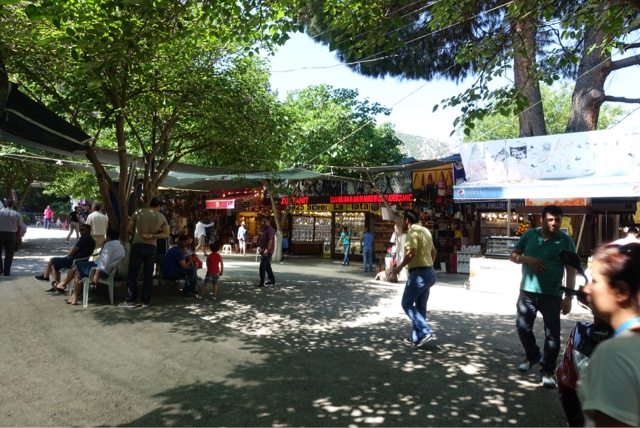 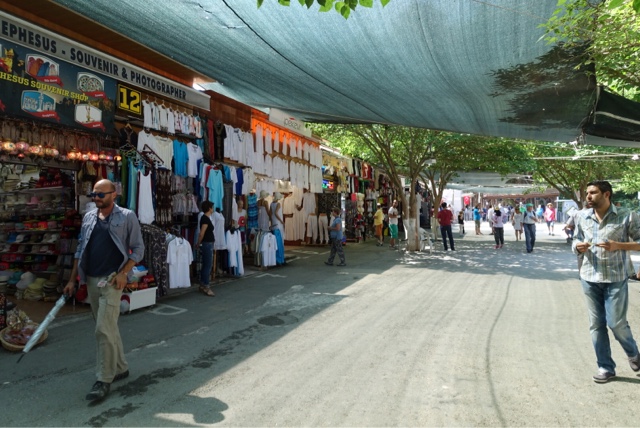 You've heard of "Running the gauntlet?" Go ahead -- I dare you.
We took the afternoon to nap and needlepoint. R visited the ship's doctor and is resting now. Not sure if he will be up for touring tomorrow. I might be doing the whole solo thing. As for me I am feeling better though certainly not 100%. I've been taking decongestant and drinking lots of fluids. So far it seems to be working. 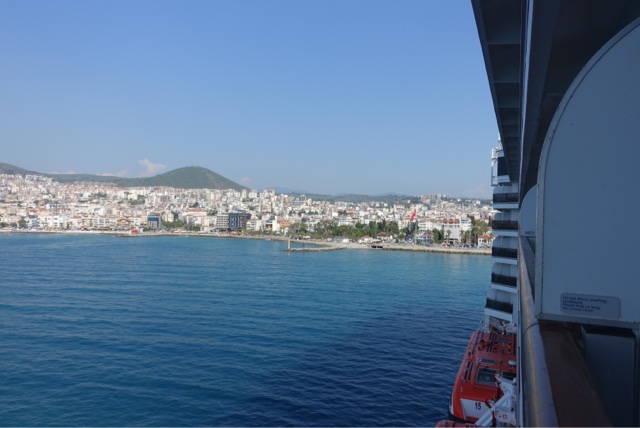 From our balcony
Posted by Russell at 12:38 PM