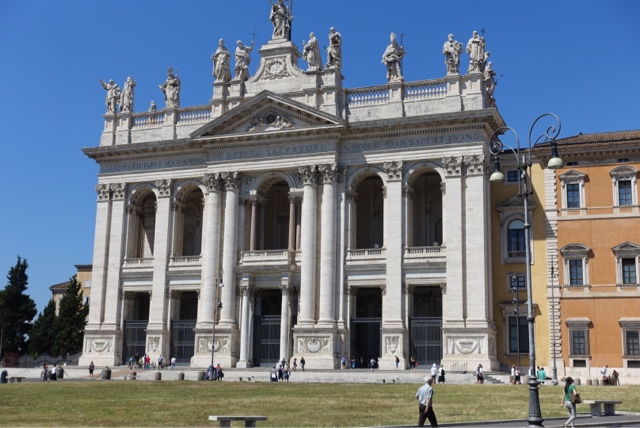 As if the Vatican wasn't enough, I dragged Russell to a couple more churches today. The first was San Giovanni in Laterano. This church was the seat of the Pope prior to sixteenth century. So for over a thousand years it was the center of Catholicism in Rome. The church is still the official seat of the Pope in his capacity as Bishop of Rome (whatever that means). It's an impressive church as you can well imagine it would be. Large but not monstrously so and of course decorated with lots of marble, frescoes, gold leaf and mosaics. It's actually quite a mishmash in terms of style. One part looks Byzantine, another part neo-Classical and yet another part looks Baroque. I enjoyed it though. Certainly it was more pleasant to visit a church about which I had no expectations and also a church that was not ludicrously overwhelmed by tourists. 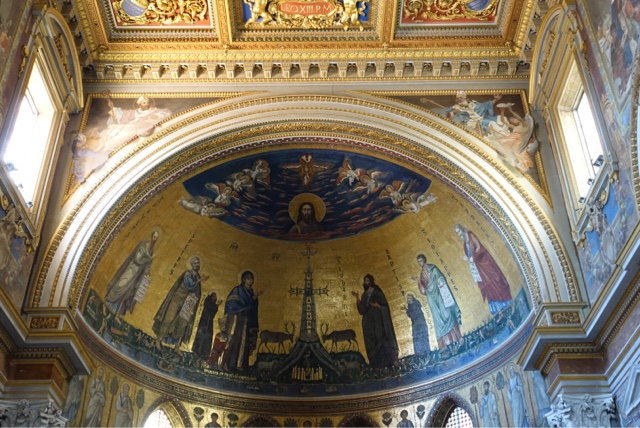 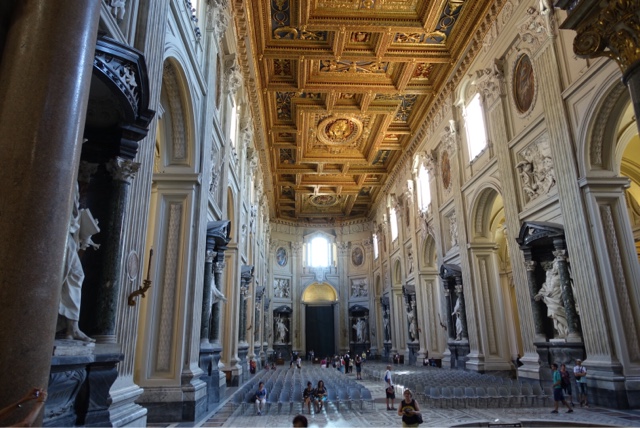 The second church we visited was Santa Maria Maggiore. This was another impressive church with an early Christian feel to it due to the simple layout with early mosaics and patterned marble floors. It seems that they have more successfully brokered a truce between the tourists and the faithful with this church. They have set aside a chapel that is quite lavishly decorated but reserved only for the faithful where photos and tourists are not allowed. Smart I think. Visitors can't begrudge the locals setting aside a place for themselves and locals have a space where they will be unmolested by the great unwashed. 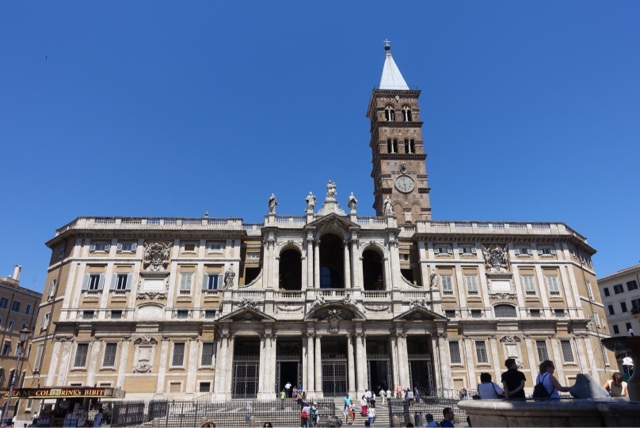 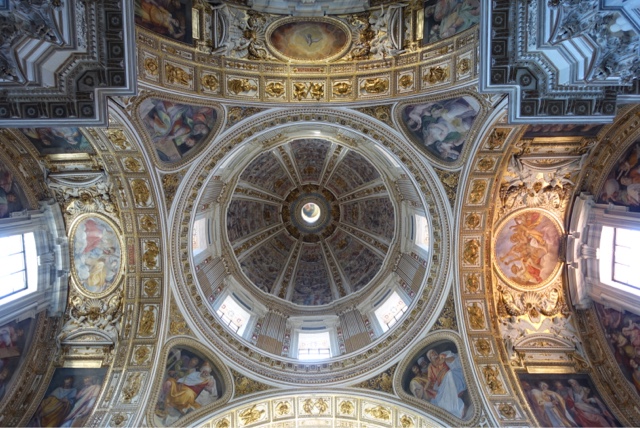 After Santa Maria Maggiore Russell and I walked to a restaurant that had been recommended by our food tour company. It was called La Carbonara and it is located in the Monti neighborhood. We arrived fifteen minutes before it opened for lunch and they had a bench outside so we decided to sit and wait. But then we got to reading some of the signs posted out front. One was the symbol for Trip Advisor with a slash mark through it and something in Italian about no more bogus ratings. Ok so they don't like Trip Advisor. Then there was another sign in Italian mostly with some English that talked about how this restaurant was not a fast food place and that there were no MasterChefs in the kitchen (a reference to the successful BBC program). No Gordon Ramsey either it went on. In fact no reality TV shows at all. Instead what you have here is a real live genuine Roman osteria and blah blah blah. 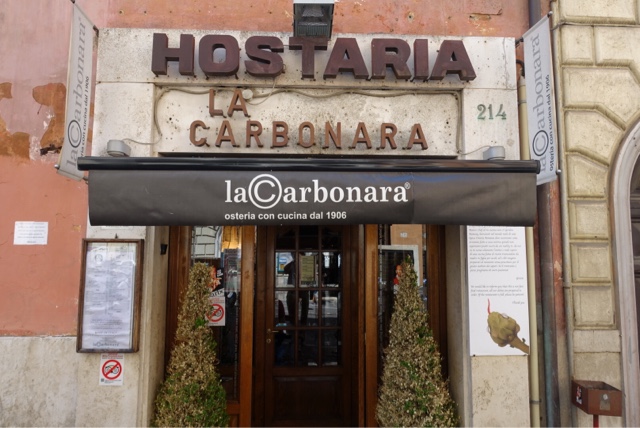 Okay so now I am beginning to waiver. Do I really want to eat at this place? Finally I notice a sign that says "quiet people are educated people" with another sign that seems to say in Italian "shhh, keep your voice down". Okay well now this is enough. I mean it's bad enough that you go ahead and assume the worst about your customers-- that they are all reality TV show watching ignoramuses who want only fast food but then to judge people based on the volume of their speaking voice is downright insulting. I myself speak softly but I have also spent a good portion (entire?) life with people who speak loudly and well you know what? They are not bad people. They are not uneducated people. They just happen to speak more loudly than you do. That's all. And you know what? I think that you've got this whole restaurant concept a little mixed up. I am the customer. You (the restaurant) work for me. I don't work for you. If you want to hand pick your guests then don't open a restaurant, serve people in your house. Then you can tell them to lower their voice. You know this whole lower your voice thing is getting on my nerves. If you are out in public honestly I think you have very little right to get upset with other people speaking loudly or to police the speaking level of complete strangers. Get over yourself. You are not in charge of the world and hey -- news flash -- some people talk loud. Doesn't mean they are bad people it just means they talk louder than you do. Oh well. 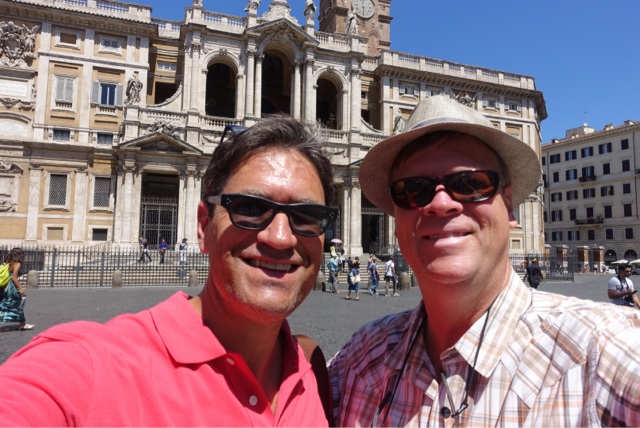 I guess I've got that one out of my system for now. Needless to say we didn't eat at La Carbonara and I'd like to suggest that you don't either. We had lunch at a place that was a little less conflicted about being in business. I say a little less conflicted because really a lot of Italians are none too keen on serving customers. They don't like it. And they sure don't like to do things any way but their way. And if you do something that annoys them (like make them do something your way) they will make sure you know it with lots of head shaking, deep sighs, argument, etc. They just have to let you know that they are not happy. Maybe I've been here too long. Or had one too many waiters not say "Prego" to my "Gratzia".
On a different (and more pleasant) note, tonight was spent "Cooking with Nona".
This was a cooking class that I had rescheduled from earlier in the week. I really didn't feel like going this afternoon. I am not sure what my problem was as we had a very good time and I knew I would but still I didn't want to go. It turned out Nona's apartment was quite near our apartment so that plus the money we had spent on the tickets made it so we had to go. 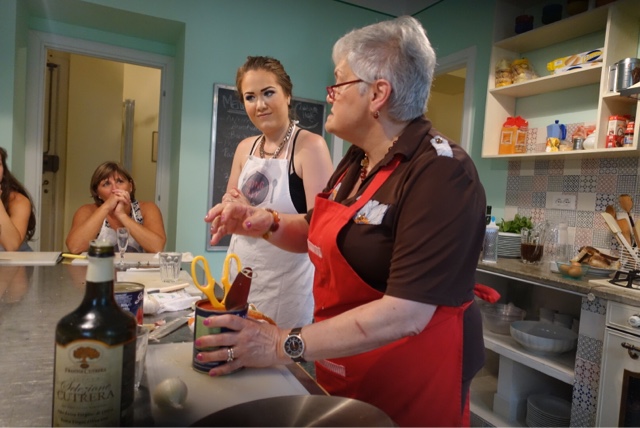 The class was a group of eight. One family of four from the Southeast US and another couple from Washington, DC that we had met earlier in the week on one of our food tours. Nona bore an uncanny resemblance to my mother had she been shorter and Italian so that was kind of strange. The menu was unfortunately very similar to the meal we cooked with Francesca in Naples, that is brunschette with tomatoes and basil, Pasta Amatriciana and tiramisu. For the main course we prepared meatballs with stuffed zucchini. Let me just say first off that these European food tour companies have got to get their act together because Americans are a lot better informed when it comes to food than they seem to think. I mean bruschetta for an appetizer? We are not brain dead. I get that the simplest things are best and all that but honestly teach me something I don't know. 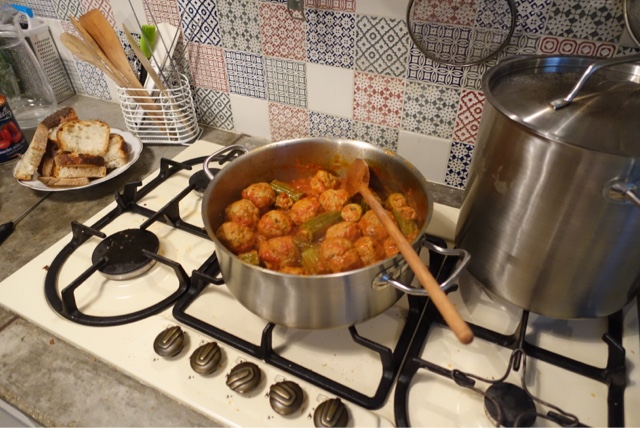 Still we had a good time which wasn't a sure thing when the evening started as Russell mixed it up with the family (a mother/aunt and three cousins). They pulled up in a taxi when we were waiting outside. We hadn't rung the doorbell yet because the appointed time had not arrived and Russell said something jokey and I am not sure they liked it too much and then we noticed that they had shopping bags from Louis Vuitton and I began to wonder what had we gotten ourselves into. Four hours with these gals? Well once we got inside and the other couple that we knew arrived everyone seemed to loosen up and by the end of the evening I really enjoyed meeting them. So there you have it, you just never know. 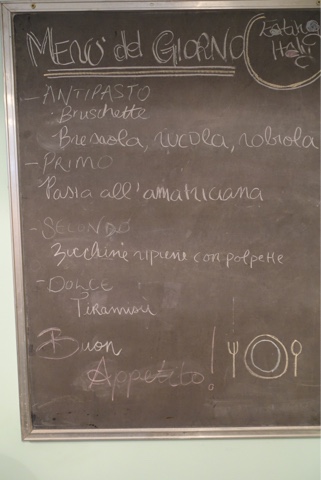 Now, as for the food, well the bruschetta was good and actually I did learn a little something with regards to how to make it. The appetizer was quite good as was the pasta. Of course how I am going to make the Amatriciana sauce in America without guanciale is beyond me. I mean all the distinctive flavor is in the guanciale (which for all you reality TV watching, Gordon Ramsey loving ignoramuses out there is pig cheek). As for the entree, well that wasn't terribly good. Russell called it inedible. I thought that was harsh but let's just say I was the only person (and I mean the only person) to ask for seconds and the only reason I did it was because I didn't want to hurt Nona's feelings. Sad but true. The tiramisu (which means "pick me up") was very good but isn't there any other dessert in Italy besides tiramisu? 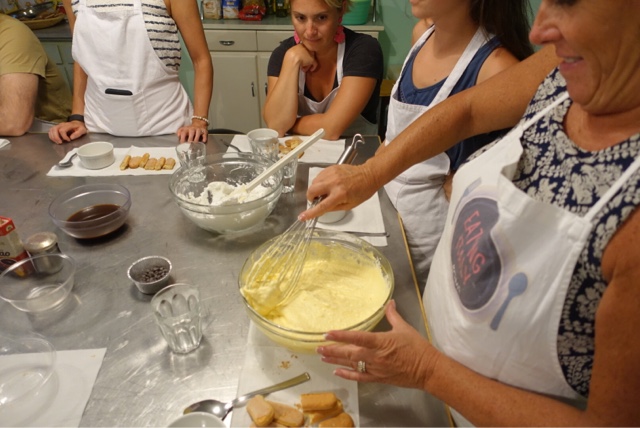 Well I am going to stop now because I've been extra opinionated tonight and I've really got to stop writing so much because you are very busy and although you are interested you are not that interested. I'll try and do better (read briefer) tomorrow.
Posted by Russell at 2:35 PM