Remember how I said that expectations can really screw up your vacation. Well, I've found another way to spoil your vacation -- a bad attitude. Yesterday we visited Messina in Sicely. We did not arrive until after noontime. Consequently, we had the morning to stitch and relax on our veranda. It was very pleasant. 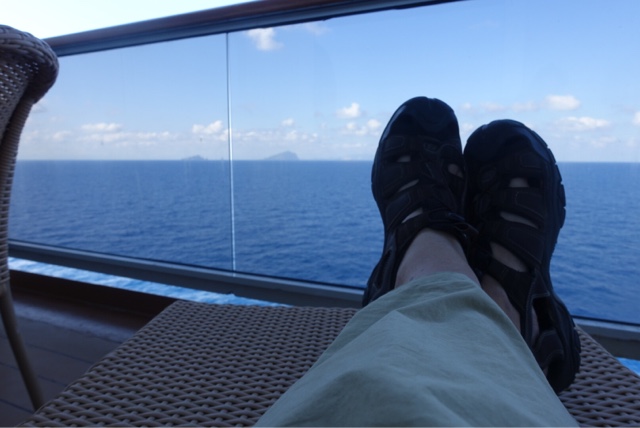 Russell relaxing as we pass some islands near the isle of Stromboli. No, I am not kidding there really is an island called Stromboli -- who knew? 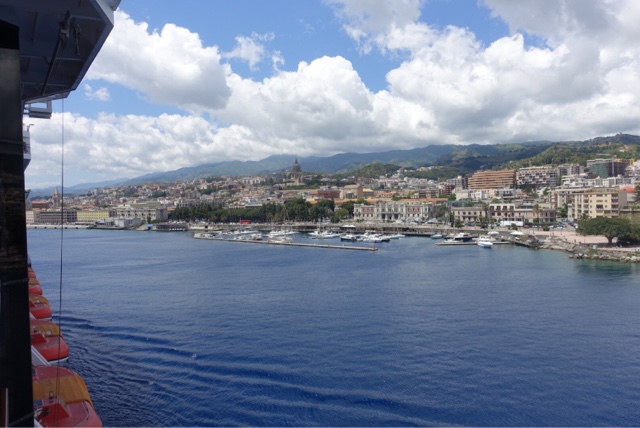 Arriving in Messina
Then, we arrived at our dock in the downtown area and everyone started piling off the ship and I was getting anxious because everyone else was getting off ahead of us while Russell looked at the situation from a totally different perspective -- the "Isn't it great we didn't rush to get off with the rest is of the ship?" attitude. To which I could only reply with a weak smile. Well things deteriorated from there and we ended up having an argument and very nearly never getting off the boat at all. 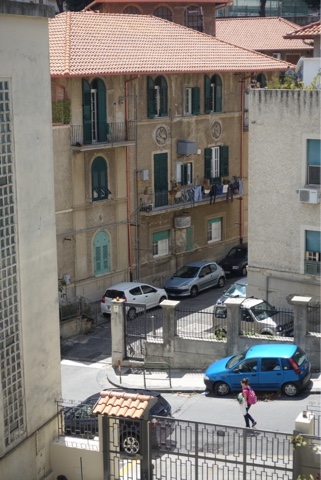 For some reason this photo just strikes me as very ... Messina? Sicely? Italy? Not sure which but it is very ...
Well, eventually we did get off the boat but I was bound and determined not to have a good time and I am embarrassed to say that I succeeded. Russell, wisely, tried to work around my bad mood but for the most part I would have none of that. To make matters worse although we did have two maps neither one was worth a tinker's dam. So, we had trouble locating the things we were supposed to see and in one instance we struggled to get to a church that we could see but  could not figure out how to get to only to discover once we got there that it was under renovation and closed. Needless to say this did not help my mood and after a few hours in the hot sun (wearing long pants I might add and shoes that were rubbing the back of my heel the wrong way) we returned to the ship where I took a nap and Russell went for a soak and a steam. 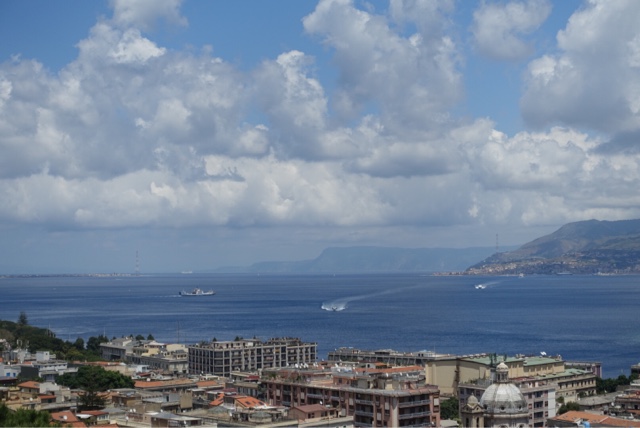 Straight(s?) of Messina (looking from Sicely toward mainland Italy) 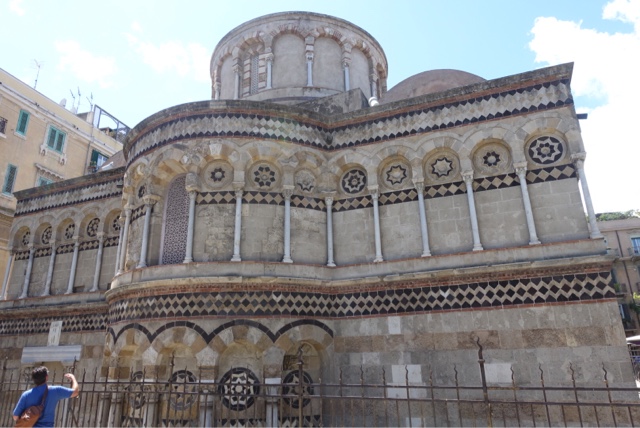 This darn church was influenced by Moorish design and proved very difficult for us to find!
All of this only goes to show that people who are committed to not having a good time will usually succeed.  Beautiful weather, lovely scenery and interesting culture be damned! Only later did I realize/accept the fact that my bad mood and poor attitude were due to feeling anxious about going it alone (of course still with Russell) but without a tour guide or group. 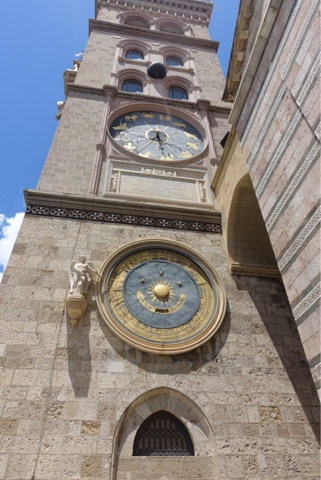 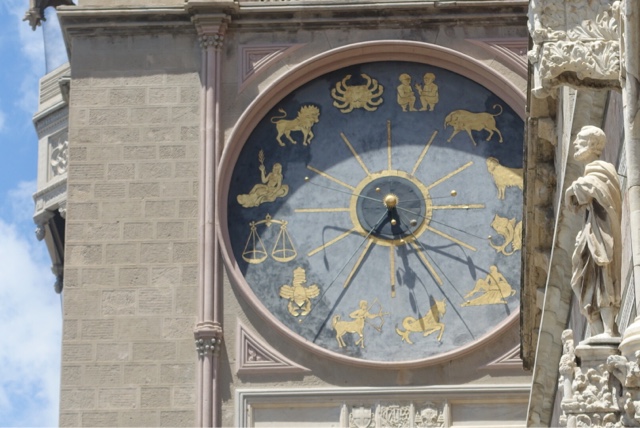 Astronomical clock in Messina
Today's visit to Valleta, Malta was a complete turnaround. We had done our homework, left the ship early, knew just where we were going first, had two maps that were useful, were patient with one another and had a most excellent day. It helped of course that Valleta is lovely and the weather was fine. 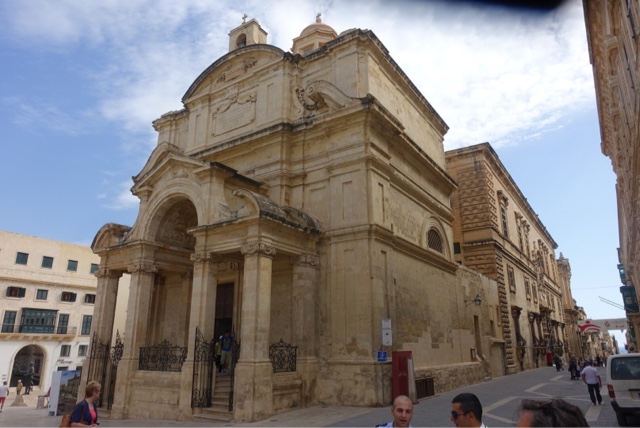 Maltese church. Not sure which one. They have 365 of them (supposedly). 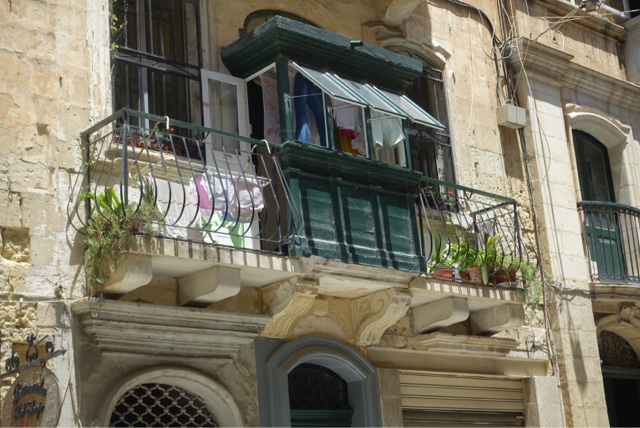 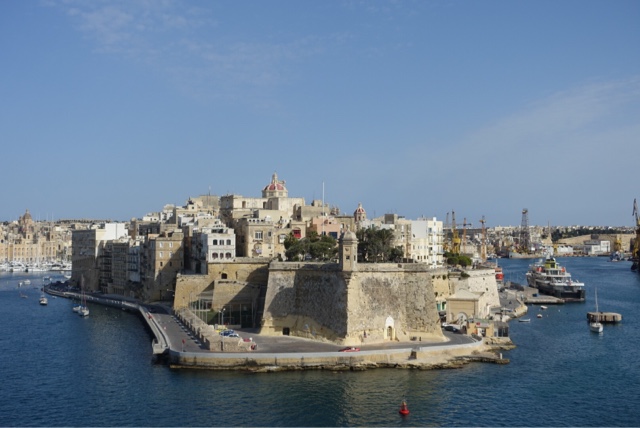 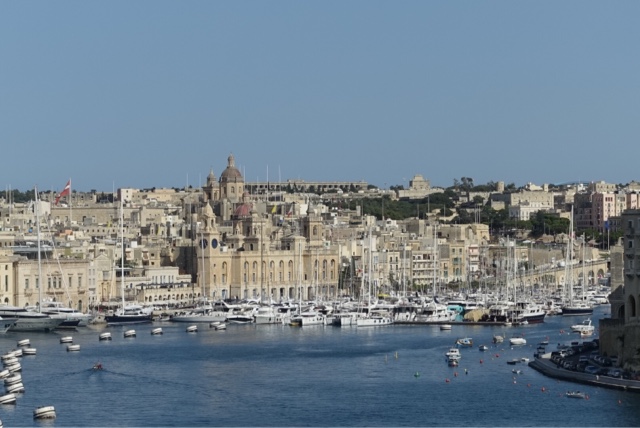 Harbor at Valleta, Malta
Our ship once again was able to dock very near the downtown area. We took an elevator to the upper town section and spent most of the day walking. We did some shopping, went to a house museum, missed the opening hours of not one but two different churches, had some lunch at an outdoor cafe and to top it all off participated in the Valleta Gay Pride fest. It was a particularly joyful gathering because same sex marriage was just made legal in this predominantly Catholic country. And the sky hasn't fallen yet. Imagine that! 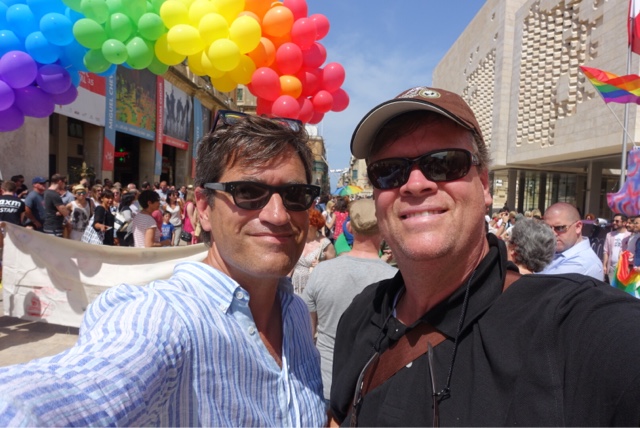