Russell thinks I should call this blog entry "How small can a city of 1.6 million people get?" More about that later.
We had a "Gaudi" tour this morning. I won't explain who Gaudi was -- if you want to know more about him try Wikipedia. Oh, snap.
First stop Casa Battlo. 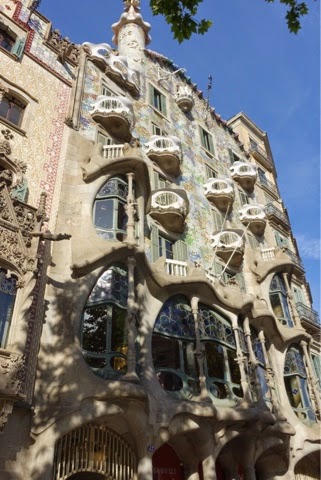 Our tour guide said his favorite word regarding Gaudi is "peculiar". His work was peculiar and the Casa Battlo is a fine example of what makes his work peculiar -- the organic shapes, the symbolism and the interesting color schemes. 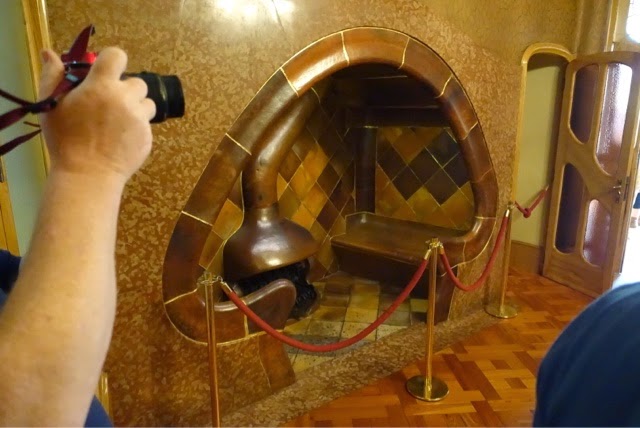 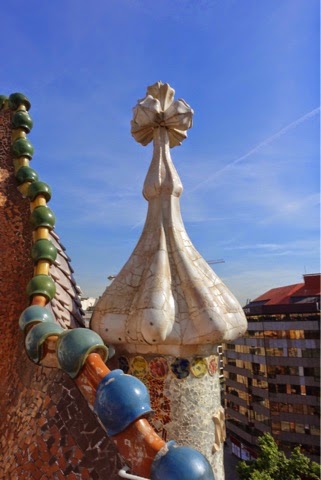 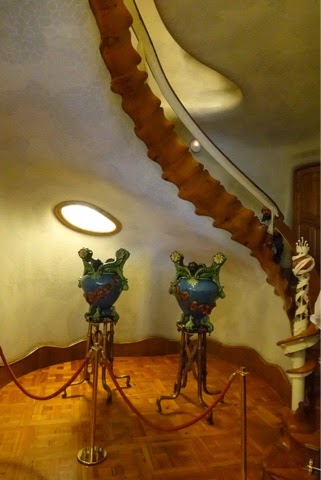 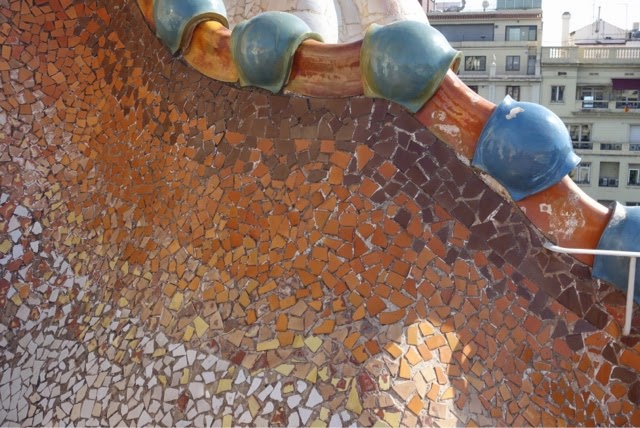 Dragon's back roof
After our tour we took a brief bus ride to Sagrada Familla. The church is undergoing a lot of work in hopes of finishing by the one hundredth anniversary of Gaudi's death in 2026. What it means for today's visitor is that a good portion of the building is shrouded in scaffolding and/or netting while other parts of the building (the recently completed bits) are jarringly (new word?) different (in color) than other parts that were finished decades earlier.
The interior is however totally finished and quite remarkable. It's a different experience to be in such imposing church that is also modern in style. I found it quite refreshing. 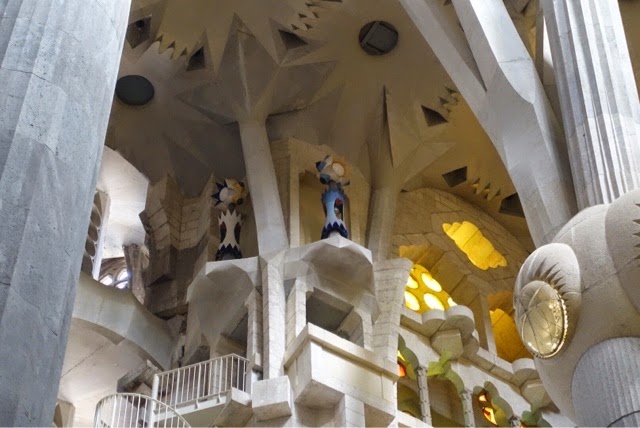 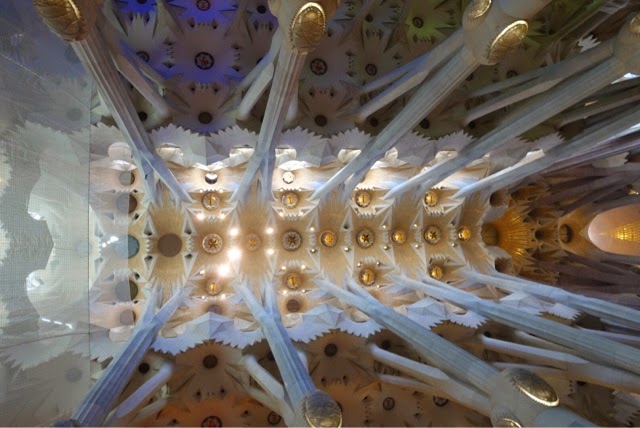 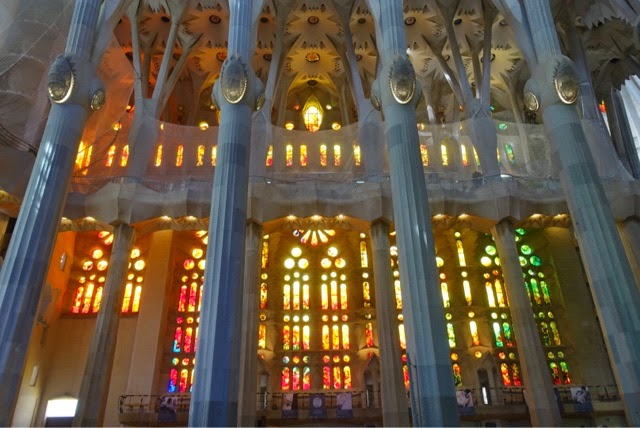 It was crowded though. 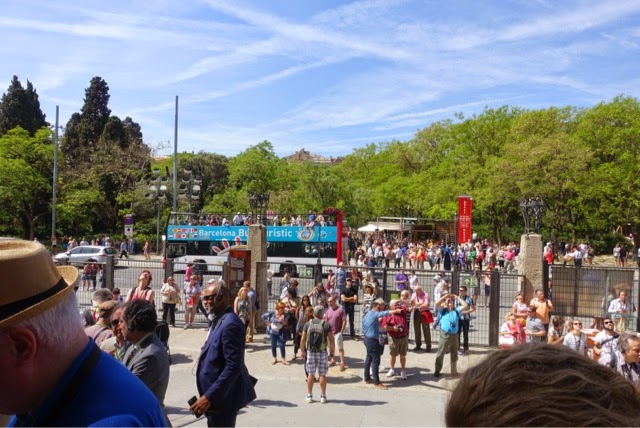 We took time off in the afternoon in preparation for tonight's tapas tour. We left our hotel at 6:30 to meet the tour group by 6:50 at Placa de l'Angel. So, we headed out with me in the lead taking us confidently directly to Portal de l'Angel. Well, obviously we did not find the Hotel Suizo (in front of which we were supposed to meet) because I had taken us to Portal and not Placa de l'Angel. Okay, no problem, we can handle this. Let's get out the map. Can't find Placa de l'Angel, it's not listed -- but there is a Placa dels Angels (plural not singular). Must be that, right? Off we go -- in the totally opposite direction. Now Russell is on his iPhone telling me that "According to his iPhone I am taking him in totally the wrong direction." Not helpful. Only problem is I was taking him in totally the wrong direction because when we get to Placa dels Angels there is no Hotel Suizo. Now I think "I better check my notes again" and I can see that it says "Placa de l'Angel, in front of Hotel Suizo next to Metro stop Jaume One." Okay, where is metro stop Jaume One? Other side of the Ramblas (in the direction from whence we came). Okay, it is getting late now -- five minutes to seven. Russell: "Let's get a cab". Me: "It won't save us any time. We are better off going by foot." R: "But my nav says..." and "Please can't we just stop and look at the map again." Me: no response. We are getting there though. I have found the street it's on and now we have just a couple of blocks more to go and we made it, five minutes late but they have not left without us. Phew. Oh my G-- I am so hot. And do you know why? Because I decided to dress up tonight's outfit with a summer scarf. Bet you've never heard of one of those. No, you probably haven't and do you know why? Because they are COMPLETELY IMPRACTICAL-- especially for someone with thermal "issues". 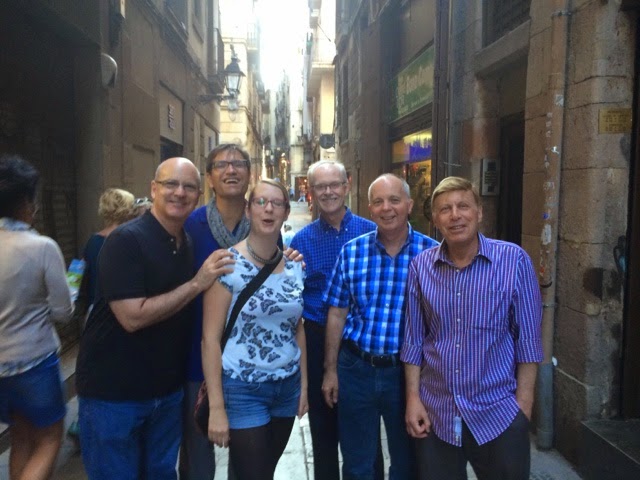 So, we meet the group. And it's all guys. Gay guys. Who have just traveled to Barcelona by boat. Which boat? Oh the Celebrity Equinox! And where are they from? Why Delaware of course! And what did they do today? Oh they visited Casa Batllo. And Sagrada Famila. So strange. This is what Russell was referring to when he suggested a name for this blog entry. This plus the fact that we have continued to bump into people who were on our ship in the streets (including this one totally "Thinks-they-are" gay couple that we purposefully dissed because they had earlier rebuffed our attempt to get to know them -- and now they want to get to know us? Oh no, I think not.)
So what about the tapas tour? Well we had a lovely guide named Claire and we visited three places. One was a cheese store then two places for tapas. Small, out of the way places we would never have found on our own (let alone known what to order). It was a fun evening (aside from the plate of fried sardines that was placed directly in front of me!) but probably not worth what we paid if you think of it strictly in terms of amount/cost of food versus cost of ticket. Still we met Claire and she was lovely and she had agreed to go out for dinner with us on Thursday night and she is going to take us to one of her favorite places so that should be fun. 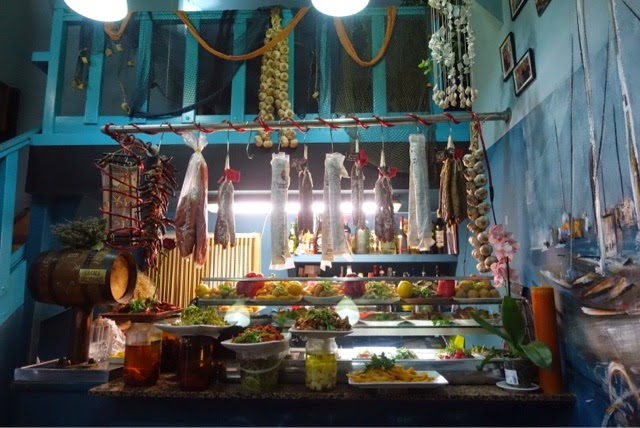 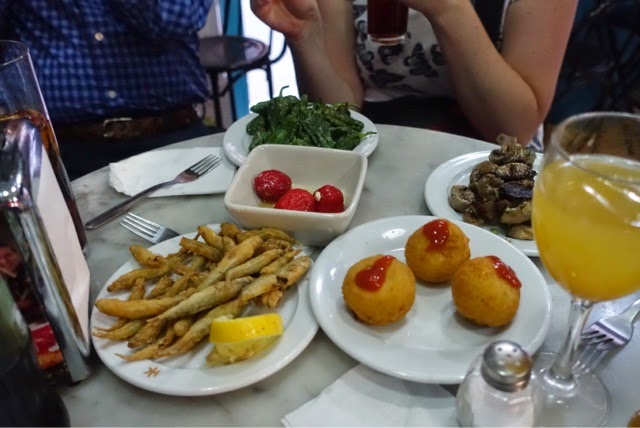 Alright that is enough blogging for one evening and probably way more than you want to read. I'll tell you this blogging is definitely cutting into my reading time (but I don't mind because you all have been super sweet and encouraging and I appreciate it).
Posted by Russell at 2:56 PM