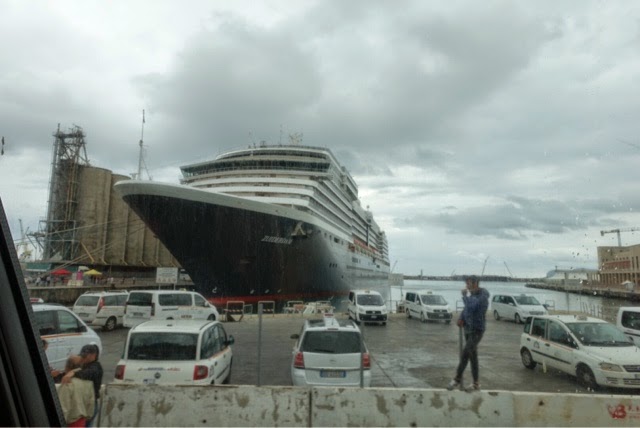 Our ship this morning
Remember what I said yesterday about finally a break in the weather? Well, I take it all back. Today was cool and gray again with on and off light rain. Very unusual weather according to the locals but unfortunately not so unusual for us. I feel bad for the people who are getting off this boat on Thursday as we are supposed to have more cool and cloudy weather (with rain possible) tomorrow in Naples. Russell and I are here for the long haul. We can wait for the weather to improve -- as it surely will -- but the people who are finishing their cruise on Thursday have had a mostly cool and rainy vacation. 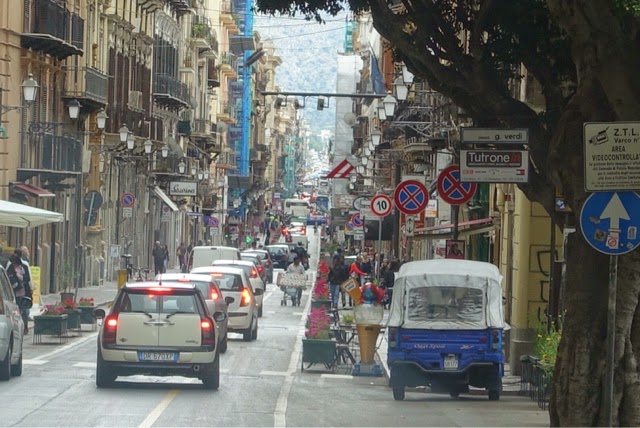 Street scene, Palermo, Italy
Enough about the weather. Palermo is, I think, an acquired taste. Many of the buildings are in disrepair and seem as if they are falling apart albeit very, very slowly. Also the city appeared gray and dirty but that might have had something to do with the weather. And the traffic -- oy veh, was it ever bad. Lots and lots of one-person-per-car jam-ups. Our bus spent a good portion of the day sitting in traffic. 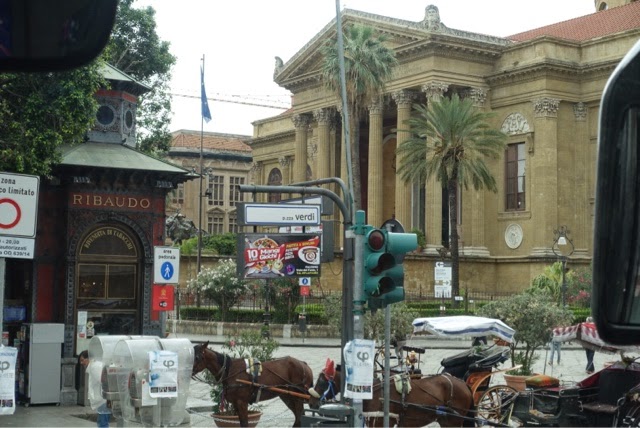 The Opera house
Also, the drivers. Yikes! Fearless would be one word to describe them. Reckless  is another. Our bus driver did well to negotiate all the double parked cars as well as the cars parked at odd angles, blocking the street. The tour guide explained the traffic situation by saying that people in Palermo drive with the attitude that they should come first because they are in a hurry. The problem is of course that everyone drives with that attitude! And, of all the days for Russell and I to sit in the front seat of the bus (right behind the driver) this would not have been my pick but sit right behind the driver we did as it was the only place we could get some extra (and very much needed) leg room. 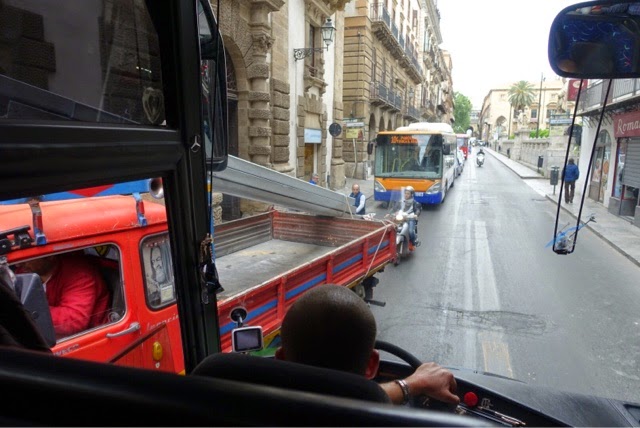 Didn't think we were going to make it 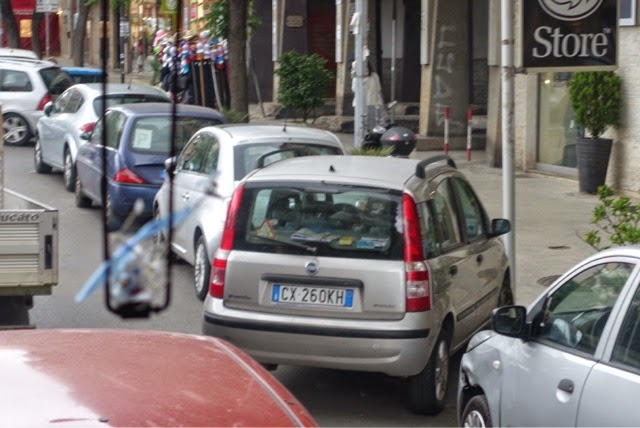 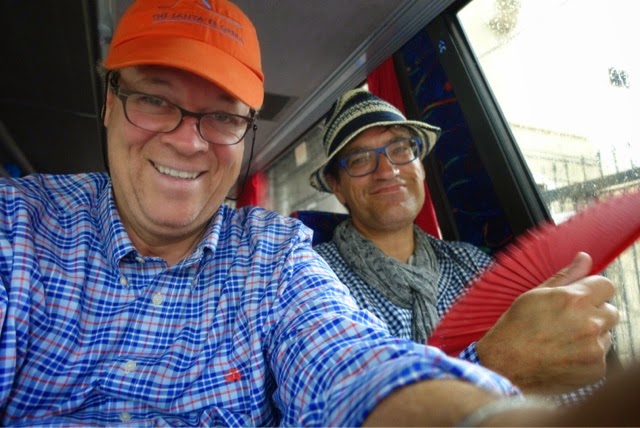 In the front seat
In the morning we visited Monreale. This 12th century(!) church is a showplace for virtuosic(is this a word?) mosaic work. The place is simply stunning with tons of illustrations of Bible stories and scenes from the life of Jesus. It goes without saying that it was crowded but perhaps less so than it might otherwise had been if the weather had been more favorable. 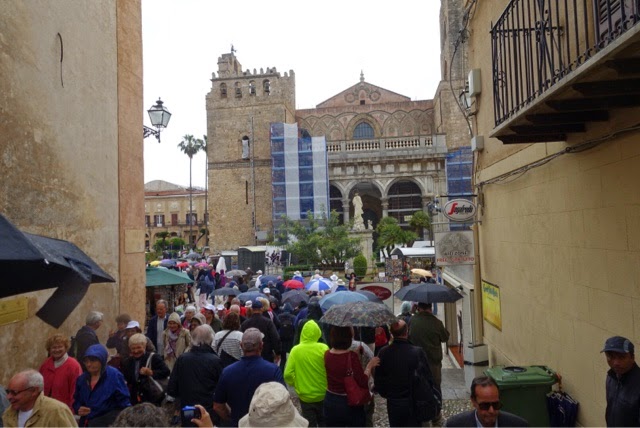 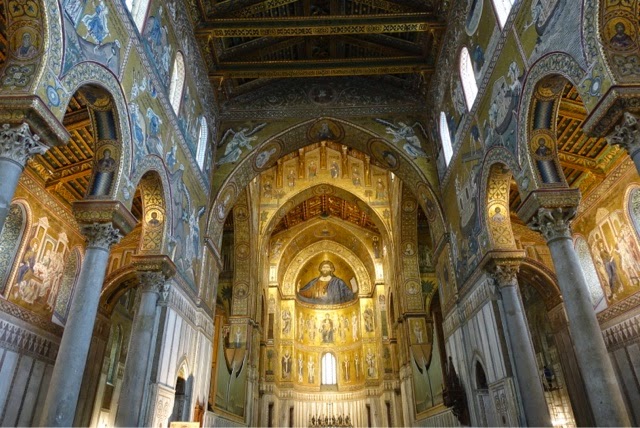 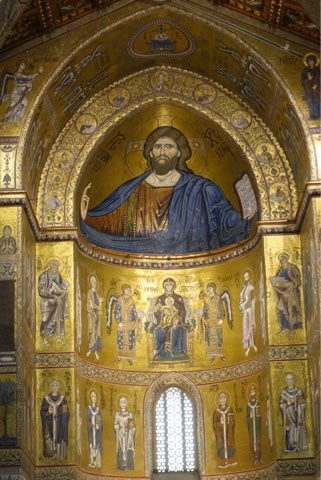 Monreale
After Monreale we stopped and bought some postcards and also the postage to mail them to the States. It was only later back on the boat that I discovered the stamps we had bought were emblazoned with the words "Only valid for Friendpost network". Now I am no postman but I can tell you that I have never seen those words printed on a legitimate stamp. When we were leaving the store the guy did say something in Italian to us about the box outside the store but since it was raining and we had limited time I was not about to write and address the cards then and there. Even if I had, I am quite sure the "Friendpost network" would never have gotten the postcards to where I wanted them to go. In other words, we got scammed. Very clever. I'll be sure to check the postage stamps before I buy them again. 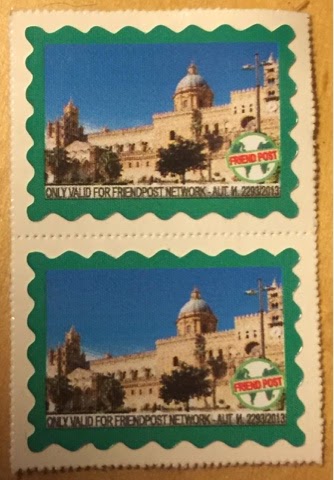 Bogus stamps
Second stop was downtown. Rain was picking up in intensity at this point. After two failed attempts to purchase lunch (don't ask) we decided to get a snack of French fries and sauce in a paper cone or, as we were kindly informed by someone from our ship who was walking by, "a heart attack on a plate". I did not bother to correct him (there was no plate involved whatsoever). 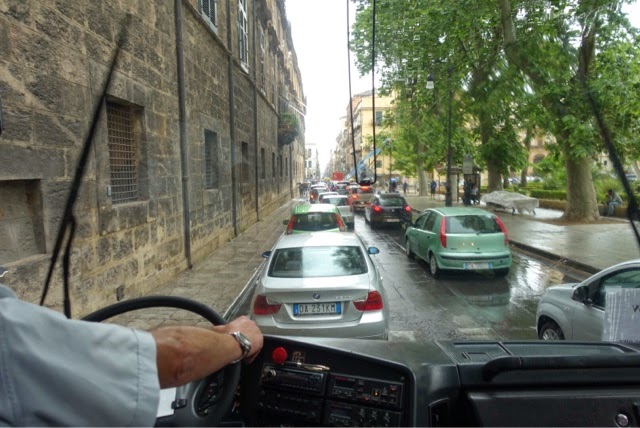 More traffic
Third stop was the beach?! Yes, we stopped at the beach despite the weather. It might have been a nice spot but as it was still raining we decided to spend the bulk of our "free" time at this place that "serves the best pizza" according to our tour guide. Only problem being that when we went to order the pizza we were informed that the pizza oven had been shut down already for the day (or at least I am pretty sure that's what our tattooed, swarthy, curly haired, designer-jean-wearing waiter said). We ended up having fried calamari that could have bounced its way to Delaware given that it was so rubbery. 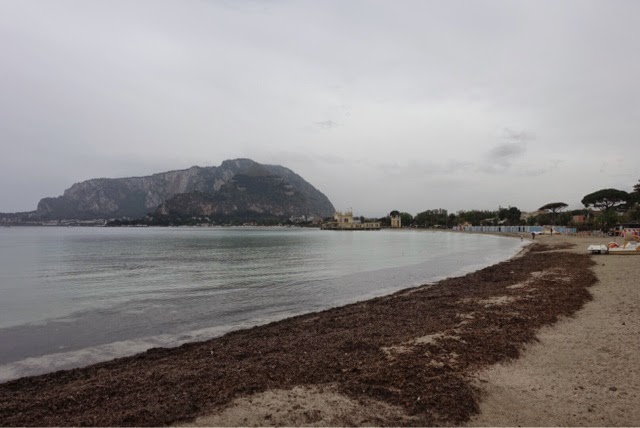 Some natural vegetation on beach (supposedly its presence is a good sign for the health of the water and it cannot be legally removed)
Back at the boat I needlepointed and exercised. Dinner was an enjoyable affair as we were joined tonight as we have been on two previous evenings by new friends Tim and Jennifer from Colorado Springs. We've really enjoyed our dinners with them even though their presence at our table has nearly doubled the length of time it takes us to eat dinner and they've  turned us into the last table to leave the dining room. I hardly recognize myself for all their bad influence! 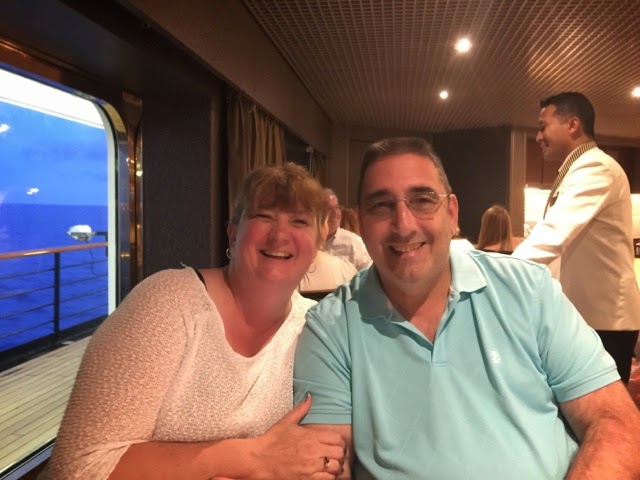 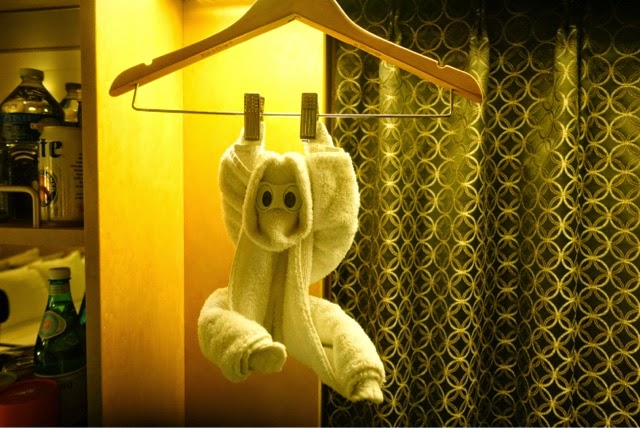 Towel monkey in our room this evening
Posted by Russell at 3:18 PM