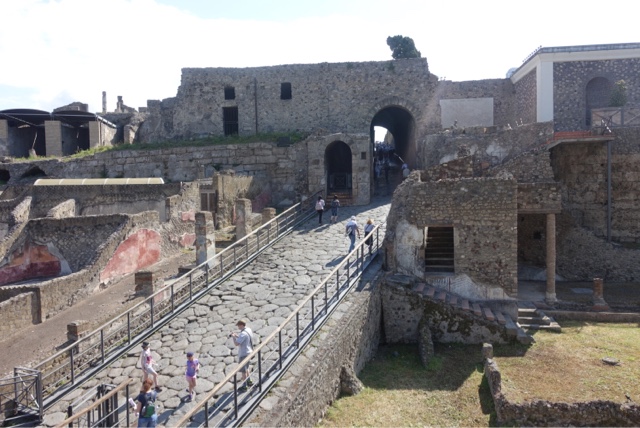 Pompeii -- entrance to the city
Expectations are a funny thing. They can really mess you up. Take for example my visit to Pompeii yesterday. I am sorry to say that I was disappointed with the experience. Partly this was because we had an annoying tour guide who would take fifty words to explain something when five words would have sufficed. I think he fancied himself a poet. Or perhaps he was just an example of the poetic nature of the Italian people. It hardly matters. Cryptic verbosity is not a desirable quality for a tour guide especially one whose English could use some work. His insistence that we "smile" and not "rush" (rushing consisted merely of walking in front of him rather than behind) was also not appreciated. 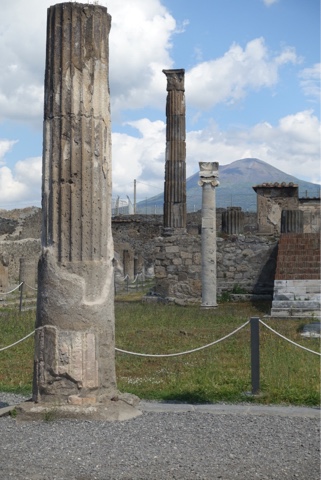 Good shot Russell!
Speaking of not appreciating, can we talk about the unanticipated twenty-five minute stop at a cameo factory for the "opportunity" to buy "world class" art (at factory-direct prices I might add). It is just this sort of shenanigan that really puts me off organized touring. 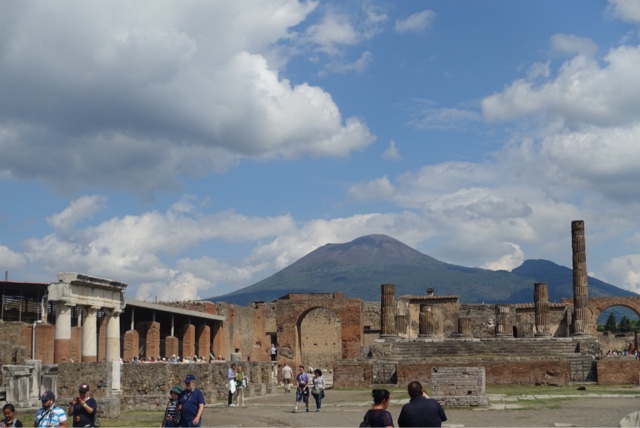 Pompeii with Vesuvius in background -- before the eruption Vesuvius was three times the size it is now
Eventually we arrived at Pompeii which was predictably crowded. However it is a big place (much bigger than I had imagined) which allowed the crowd to disperse. The ruins were impressive though I could not shake my doubts about how much of what we were seeing was original and how much was restored. Also the amount of frescoes and mosaic work was not as great as I had expected. I had thought that I would really get the feeling of a town that had simply ceased to exist in an instant and for the most part that didn't happen. For me. Russell was impressed and enjoyed the ruins a great deal. He thought it was better than he expected. 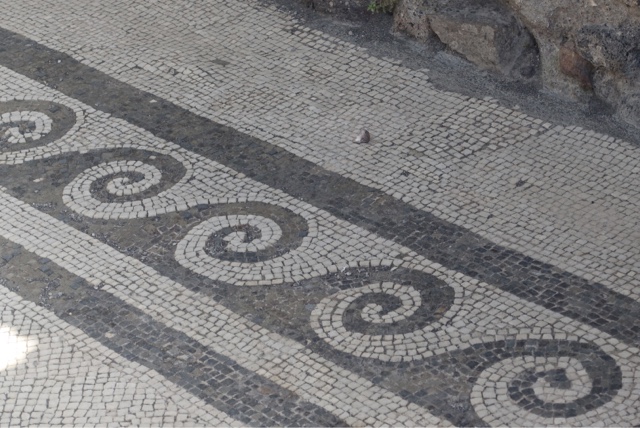 Mosaic work, Pompeii
So you see how expectations can mess you up? I expected a lot and was disappointed. He did not expect much and was pleasantly surprised. Today we visited another archeological site -- Ostia Antica (or Ancient Ostia in English). I don't think either of us had any expectations regarding these less well known ruins which are near the Rome airport. Our guide at the site, once again, left something to be desired but Russell and I were prepared this time. Yesterday evening we had discussed the fact that we needed to anticipate that the guides provided by the ship are not likely to be good and that we needed to accept that fact. 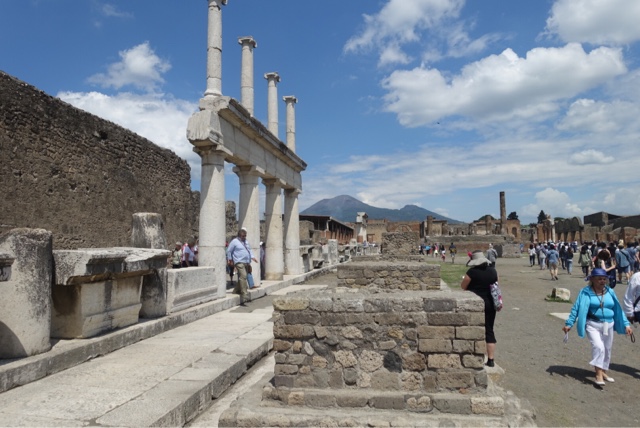 Pompeii
Ostia is also a very large set of ruins. It is set by the Tiber River and has many lovely pine trees of a variety that look like heads of broccoli on long thin stalks. The birds were chirping and the flowers were blooming and it felt like a "real" place and certainly not like the legendary place that is Pompeii. 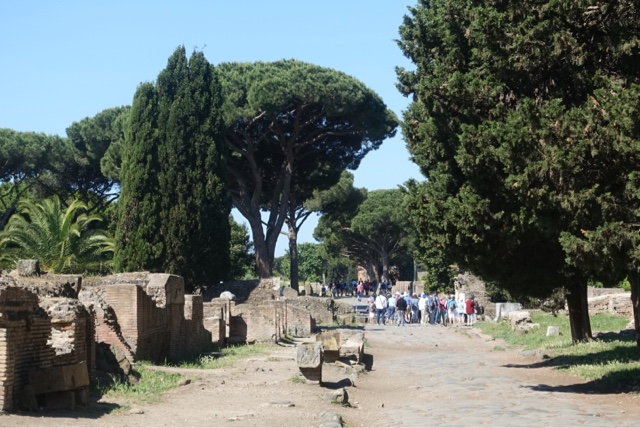 Ostia
Ostia was a working city (with taverns, apartment buildings, business stalls, etc) not like Pompeii which was devoted mostly to pleasure (large baths and numerous brothels). Also Ostia was gradually abandoned or "AH-buhn-duhn-ned" as the tour guide said (it took me awhile to figure out what she meant -- "Oh, a-BAN-dunned"). 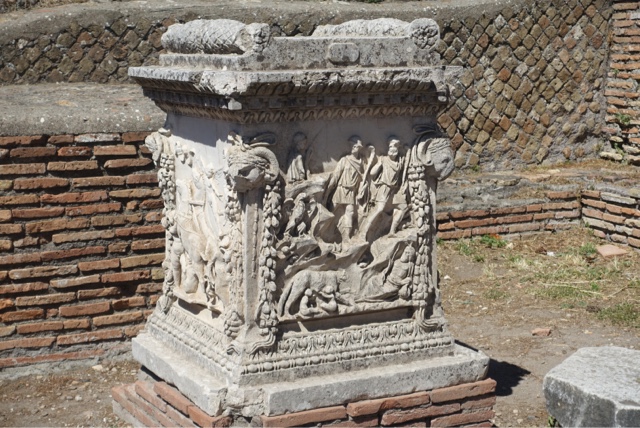 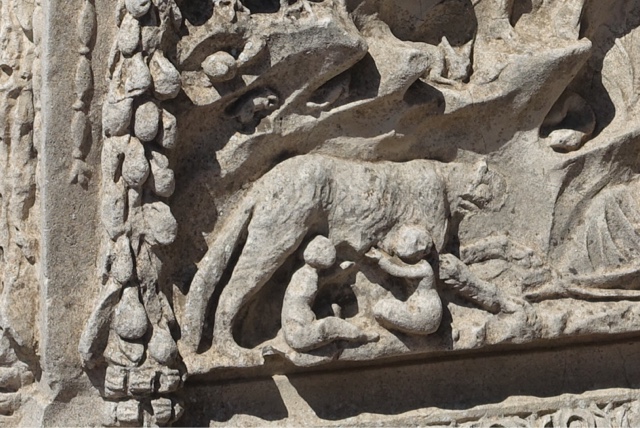 Ostia -- note Romulus and Remus
Again I struggled with the question of how much was built by whom and when. I guess I need my Roman ruins to be built by the Romans. I also struggled with my fellow tour participants many of whom were old and had mobility issues. I have to say that I find walking around these archaeological sites difficult with the uneven surfaces, the relentless sun, the distances involved and the need to stay standing for hours at a time. I can scarcely imagine doing these tours twenty five years older and with real physical challenges to boot. I am awfully lucky to be able to see this stuff sooner rather than later. 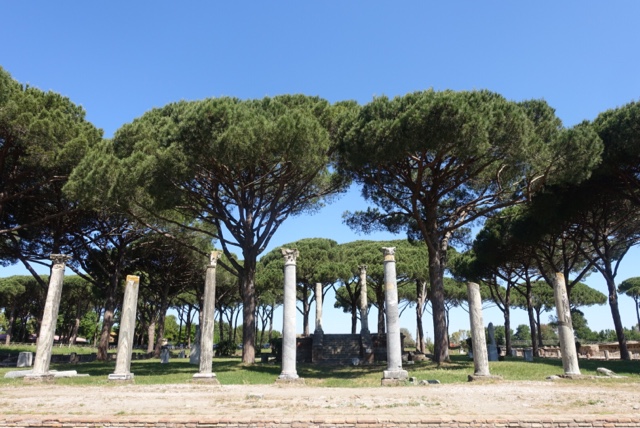 Ostia
Having said that let me also say that we made decision to return our tour tickets for the next several days. We've decided we are going to branch out on our own with the encouragement of some Dutch friends who insist that boat tours are for people who lack the proper confidence. Of course they also scoffed at us when we said that you really need to be careful at Ostia with the uneven surfaces and they do smoke so perhaps we ought not to be taking life advice from them! 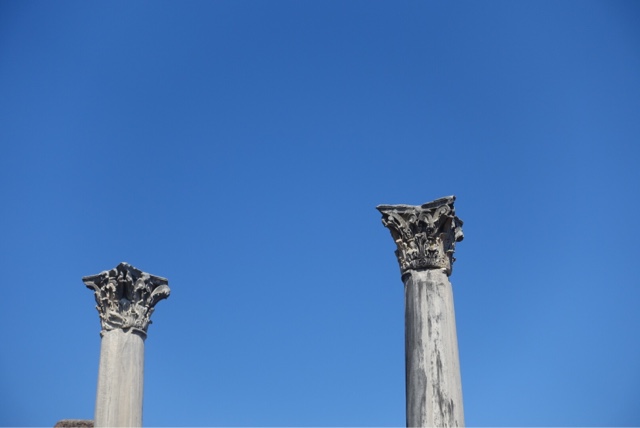 We are going to give it a try though and of course I will let you know how it goes. Oh, and if you care, the weather today was sunny but cool and yesterday was sunny in the morning with a prolonged downpour in the afternoon (complete with lightning). 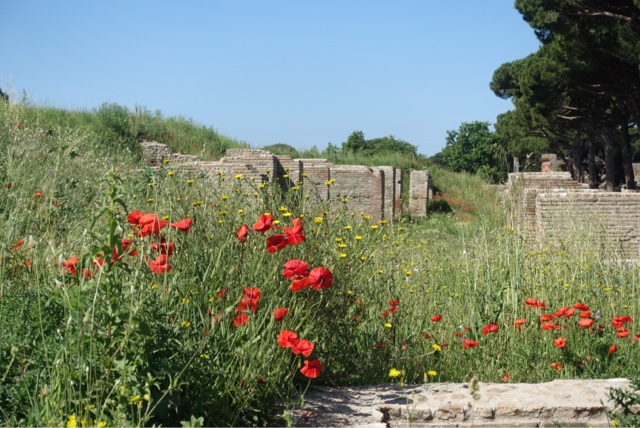 All photos taken by Russell. Hasn't he been doing a great job?!
Posted by Russell at 2:33 PM