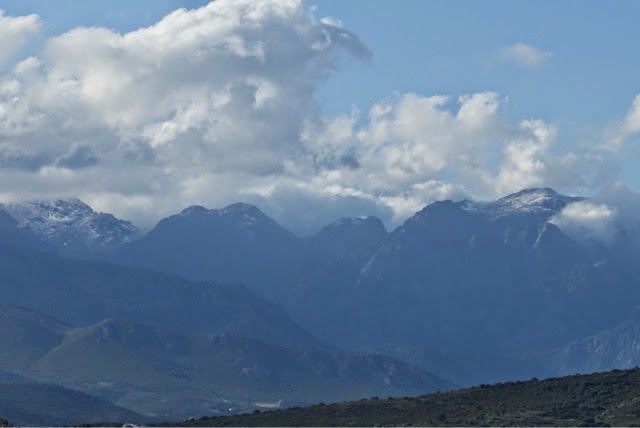 Yes that's snow on top of that mountain in Corsica!
Corsica is a rugged, mountainous and picturesque island. We took a bus tour to a hill town and then visited another town on the water. The hill town was difficult to access and mostly empty of people (except other tourists) but the view was expansive. 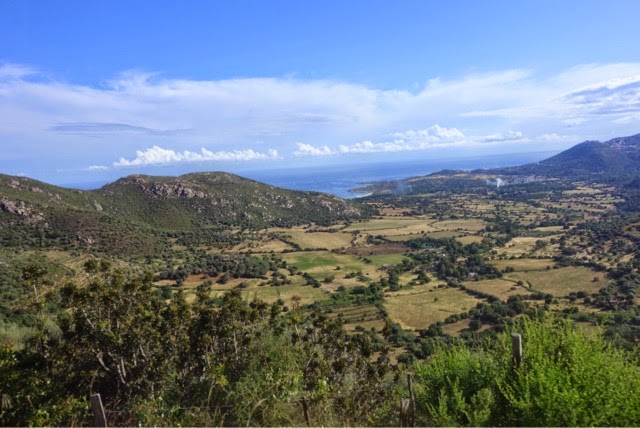 At the second village they were having a farmer's market and R and I picked up some charcuterie and a local two-milk cheese. I did overhear the vendor from whom we had just bought some honey say something to another customer about "les Americains" to which I replied "Je vous ecoute" ("I hear you"). I don't think he was being mean but still it wasn't appropriate especially after we had just bought something from him. 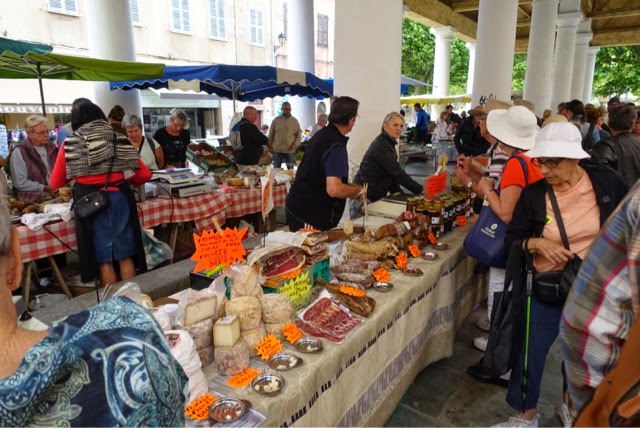 Farmer's market, Ile-Rouse, Corsica
We've encountered a fair bit of hostility/disdain during our trip so far -- from Spaniards, Frenchmen and now Italians. I get it. Really I do. It's fun to look down on people. Especially Americans. Give them a dose of their own medicine. Plus, you have all these camera-toting ignoramuses blocking the sidewalk and speaking to you in English (as if that is the language that is supposed to be spoken here) and traveling in packs and wearing badges and it's all very distasteful. 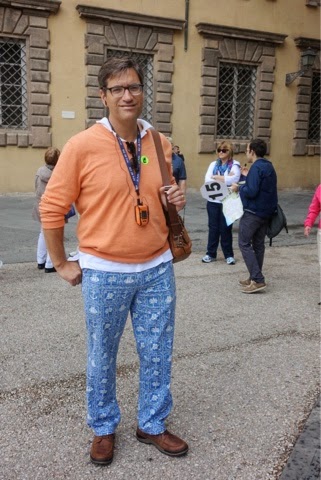 Stickered, wired for sound and looking the part in Lucca
Of course there is another side to that picture. One that's fairly easy to see -- these people (tourists) are like fish out of water and they've traveled far and spent a lot of money/time to see my country, my home town and isn't that terrific? What they need is a welcome and a "hello" and a little understanding. That's all. It's a good lesson to learn no matter who you are or where you live -- that it's all in the perspective and that whenever you see a foreigner/tourist in your neck of the woods make it a point to say "hello" and "welcome" because one day that tourist could be you. 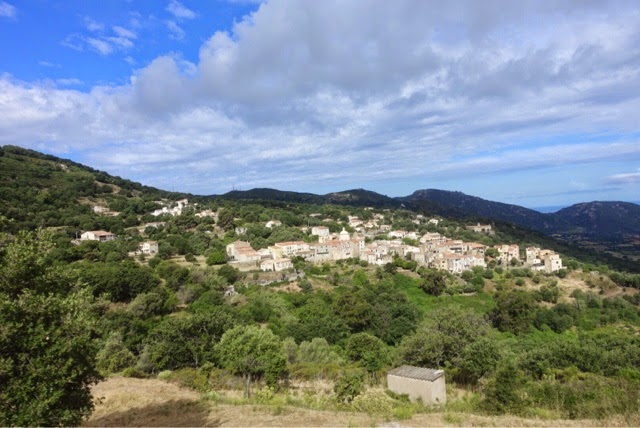 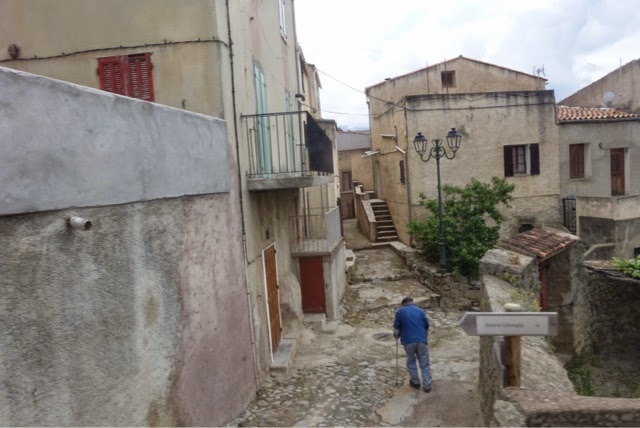 Corsican villages
I only bring this issue up because at times our tour guide today seemed disgusted with the group and I was feeling particularly intimidated by the sales clerks at the stores today in Lucca. 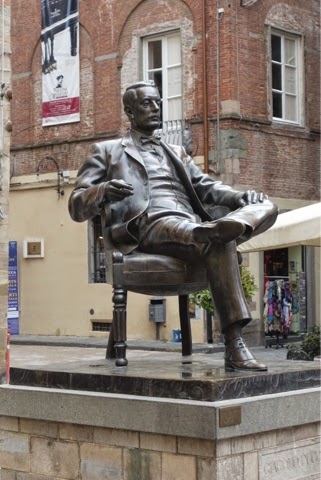 Lucca was Puccini's birth place
I would have loved to go into some of the clothing stores but in most of the stores here no one bothers to say "Hello" or offers to help. In fact, it's usually quite the opposite -- they flee when you come in or suddenly become quite busy doing something else. Mostly, you are just ignored. Sometimes it's worse. 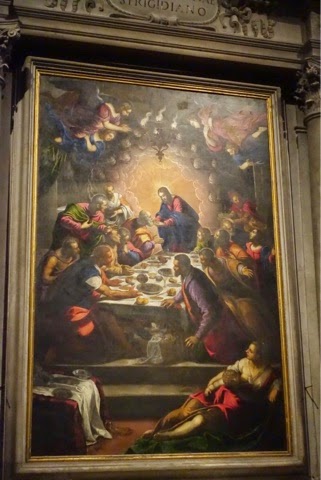 Tintoretto's Last Supper
There are other challenges when it comes to buying clothes over here. One being that the sizes are all different -- shoes, shirts, jackets, pants -- it's all different (I say that like the sizes shouldn't be different). And then of course there is the issue of our size. We are big guys. Most of these stores here are not going to have our size. So why bother going in? It's all kind of distressing for someone who likes to shop as much as myself. But remember what I said a few entries ago about stretching myself, going out of my comfort zone? Well I definitely am doing that. 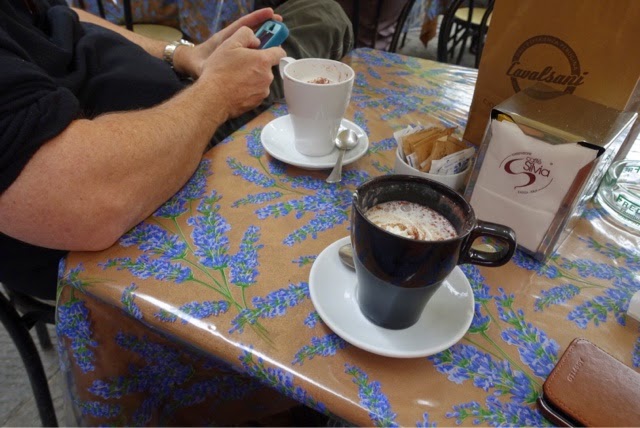 Taking a break after our tour of Lucca
Lucca is a medium-sized walled town in Tuscany. Based on my experience today, I would say that it specializes in churches. Lots of churches. And our guide spoke in a monotone voice with short ... bursts ... of English ... plus ... he wanted ... to tell us ... everything ... about everything.  I like to fancy myself a good tour participant (on time, listening, following directions, etc.) but even I was searching for the "mute" button on my headset. 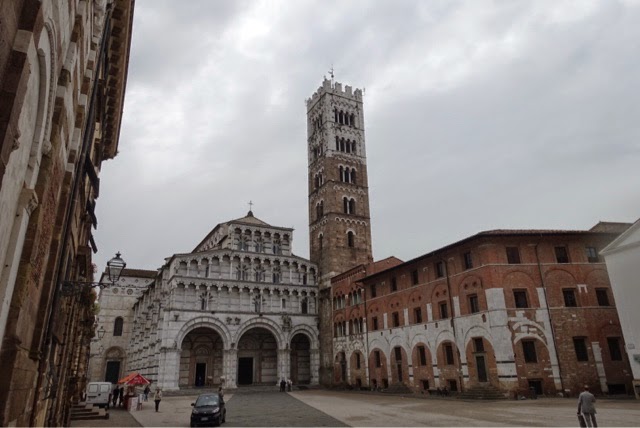 Church number three? Or was it four?
Later we had lunch in a local farmhouse-type restaurant and that was followed by a tour of a villa. See photos below. 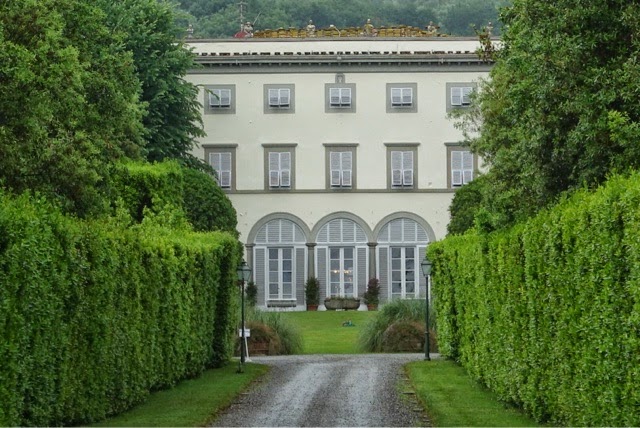 Villa in Tuscany we visited after lunch 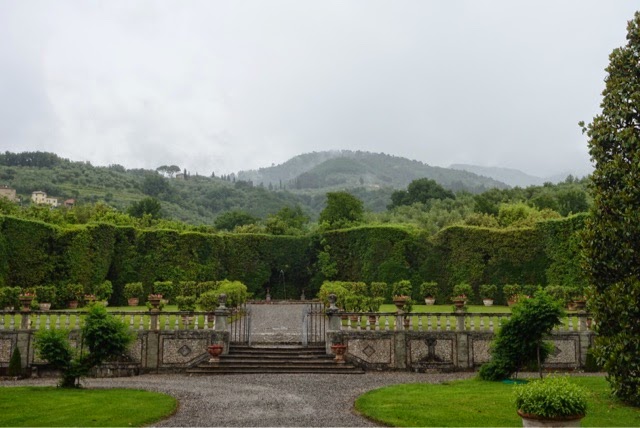 "Back yard" of villa 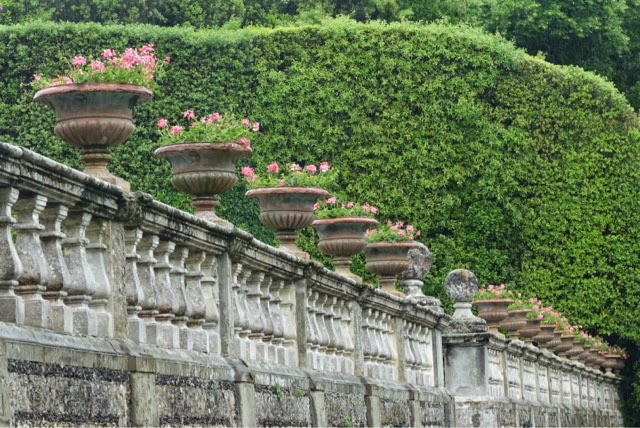 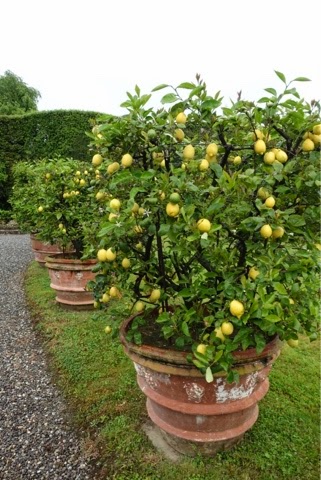