You know, it’s the little things that really can get to me. Take for instance tonight. We brought our tuxedos on this cruise as I think I already mentioned and with the tuxedos we brought (or I thought we brought) four sets of ties and cummerbunds. Two of the bow ties were pre-tied and two of them were loose. I was the one who chose to bring the loose ones even though I am none too sure on how to tie a bow tie. I knew, sort of, at one point, a while ago but I photographed nevertheless directions on how to tie a bow tie with my phone before we left just in case. God forbid people should see me in a pre-tied bow tie. They might assume that I don’t know how to tie a bow tie (never mind the fact that this would be completely accurate) and then obviously they would think much less of my sartorial savoir-faire. 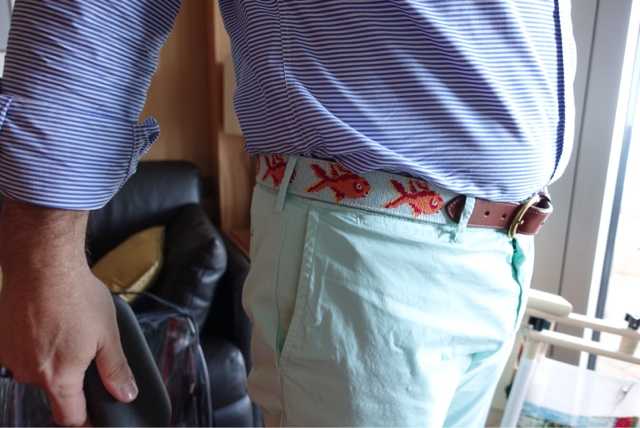 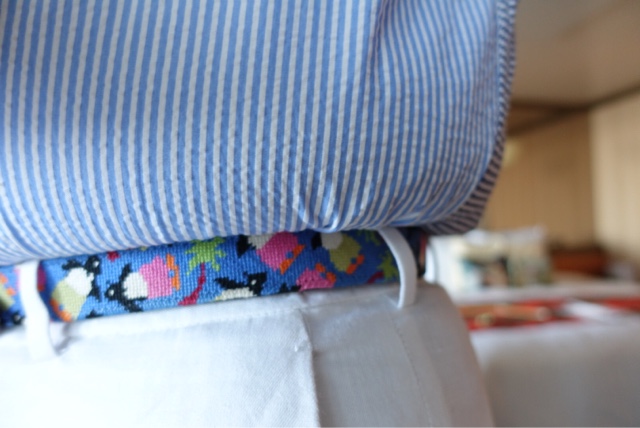 Don't our belts look nice!
Well, on the first Gala night I wimped out and went with one of the pre-tied bow ties because I just didn’t feel like struggling with tying one but tonight I was unable to do that because Russell had very generously offered one of our bow ties to another gentleman on the cruise who had forgotten to bring his. I was hoping that this guy would select one of the loose ties but of course he chose one of the pre-tied ones so now it was unavoidable -- I was going to have to struggle with tying a bow tie. 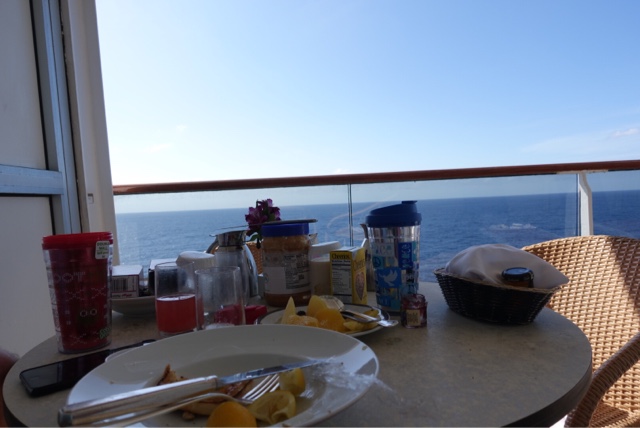 Breakfast al fresco the other morning
Well, struggle I did. Let me tell you. Forty-five minutes of cursing and sweating and damning both Russell and the guy who borrowed the tie and myself for being so grandiose as to bring a loose tie when deep down I knew that I didn’t know how to properly tie a bow tie. I, of course, did look on my phone for the photo that I supposedly had taken of directions on how to tie a bow tie but it wasn’t there. Surprise! Either I never took the photo or I didn’t take it properly. It hardly mattered. Directions I did not have. 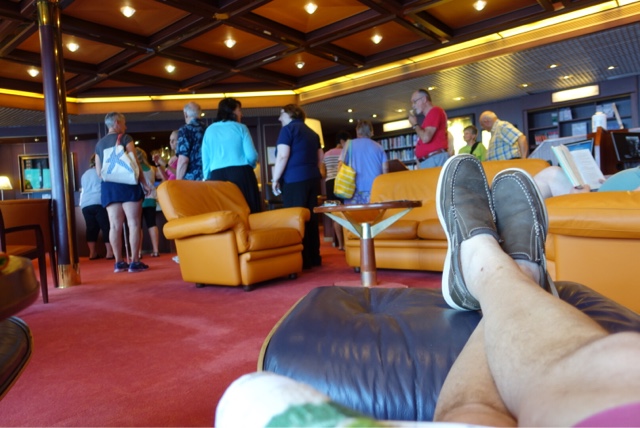 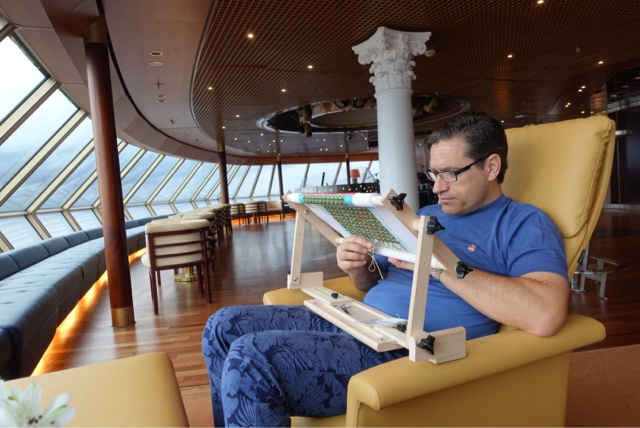 Needlepointing
Russell called the concierge to see if she knew someone who could tie a bow tie. No luck. He even braved the oh-so-frustrating Wi-Fi on this ship to find a couple of diagrams online. Well, the pictures were fuzzy (no way to read the directions) and I tried to follow them but I was looking at my reflection in a mirror and trying to consult these fuzzy images and I simply could not wrap my brain around the directions let alone try to fulfill the intricate movements that the directions appeared to require. 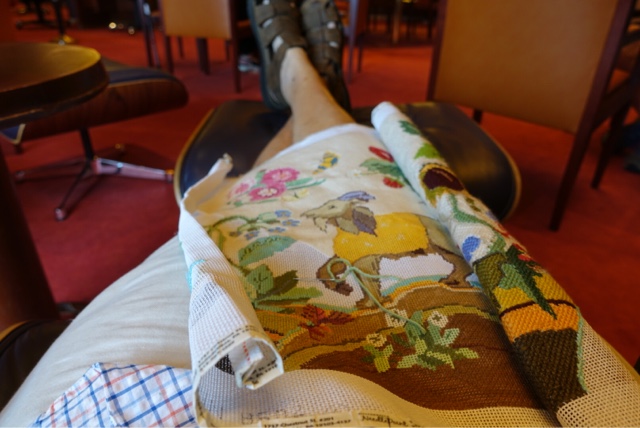 R's making progress
Long story short -- I never did get the tie tied. In fact, I ruined the damn thing with all the contortions that I put it through. It simply started to rip and fray in one spot. Stupid tie. Stupid dinner. Stupid me. 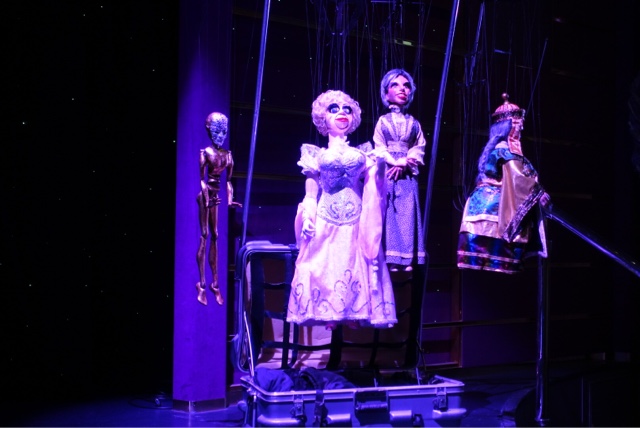 Marionettes from Phillip Huber
So, now I am nose-diving straight into rage and depression (a most excellent combination and one that I seem to be particularly fond of). We are now late for dinner and the plans that I had for a photo session with the ship’s photographer before dinner have long been abandoned. R doesn’t know what to say because I am going to bite his head off no matter what. And things are not looking good. 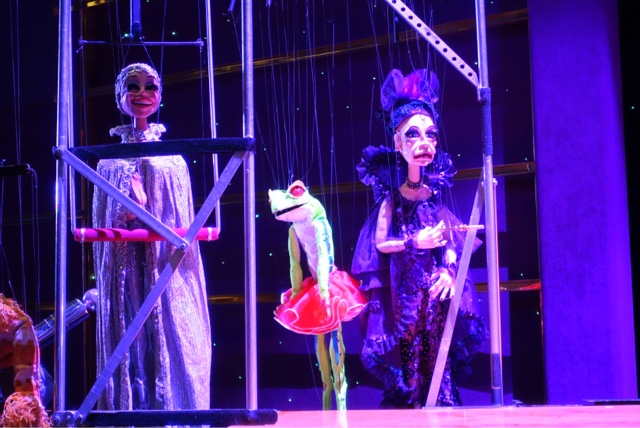 As for the solution to the shirt dilemma – I wore a new white tone on tone paisley shirt from Robert Graham that is quite stunning but too big for me (R bought it for himself) with my tuxedo jacket and pants. No tie at all. I felt a little foolish but hey so what. As for my mood, well a solution for that was not quite so easily found. I ruined (by pouting) the photo that Russell wanted to take of me and just for good measure I also ruined the picture of him (by deliberately not bothering to wait for the camera to properly focus). Then I told the professional photographer to buzz off. 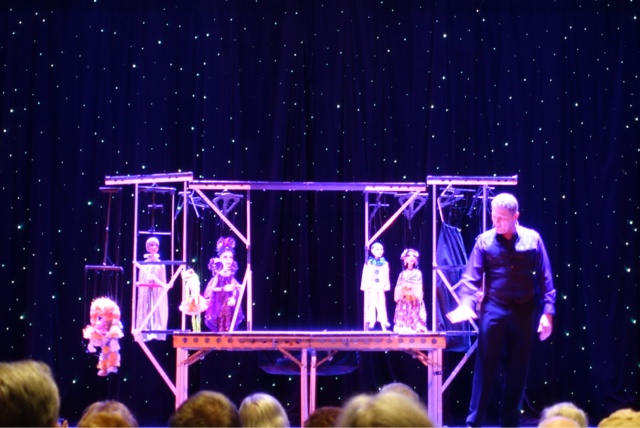 A very interesting behind-the-scenes talk we attended given by Phillip Huber
Russell was very patient and understanding but he too got frustrated when he spilled a bowl of olive oil all over the tablecloth. And the night’s mishaps continued apace. Our favorite Asian soup arrived and it tasted nothing like it had on previous evenings. It was woefully inadequate in the taste department lacking both lemongrass and cilantro. My entrée arrived and I had thought that I ordered one thing (Vegetable Tempura -- yummy) but when presented with something different I realized that I had changed my mind at te last minute and ordered skewers of tofu and vegetables with barbeque sauce (clearly I was unaware of the mood that I would be in when I placed my dinner order last night). R was given no entrée at all because no one had bothered to ask him at the start of meal what he wanted for a main dish. So thus was our “Black and Silver” Gala dinner: an olive oil slick, one surly, self-pitying diner, a too large white shirt with no tie, one ruined bow tie, a tasteless soup and squares of sponge (I mean tofu) drowned in a sickie sweet red sauce.

Now I am sitting here writing to you and I realize how stupid all this petty stuff sounds (so please no “stiff upper lip”/pep talk e-mails required). But it is, as I said, the little stuff that can get to me sometimes. I loose perspective. I begin to think things matter when really they don’t. And I forget to breathe. Just breathe. And pause. And let go.
Posted by Russell and Stephen at 6:25 AM