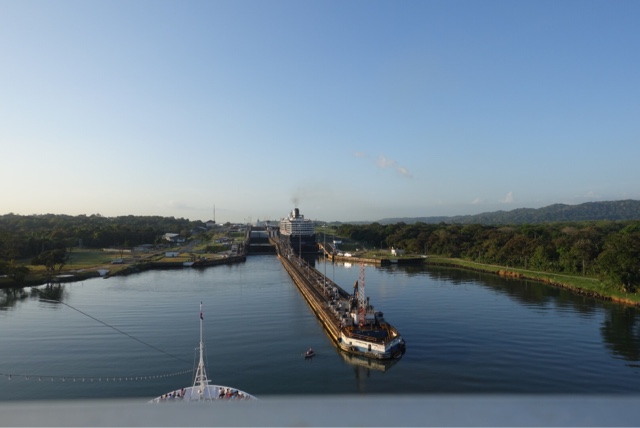 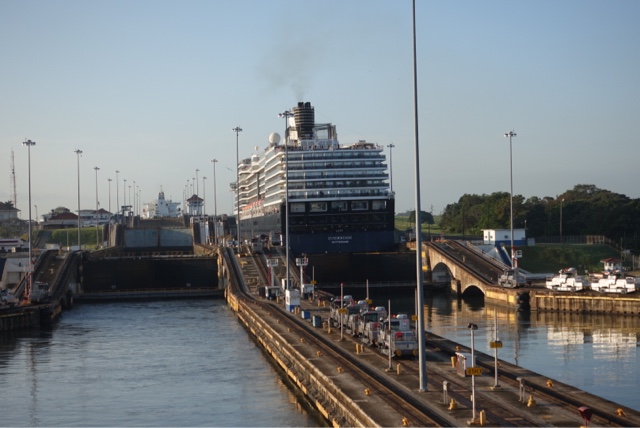 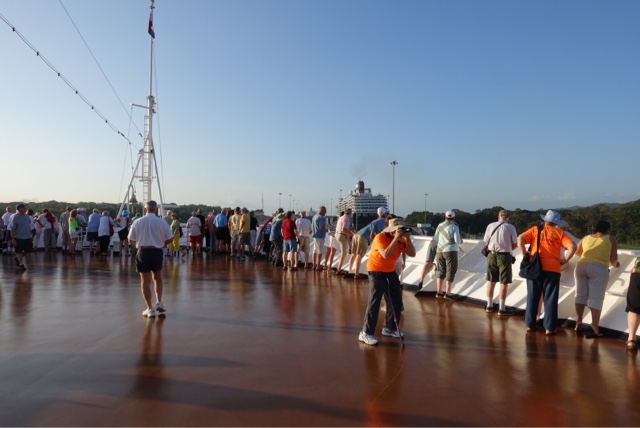 Not too much competition for a position at the rail
We had to get up early to witness the first set of locks. Fortunately, the number of people on board this ship for whom this was their first transit of the canal was probably less than fifty percent so that made it easier to find a good viewing point in one of the public areas. 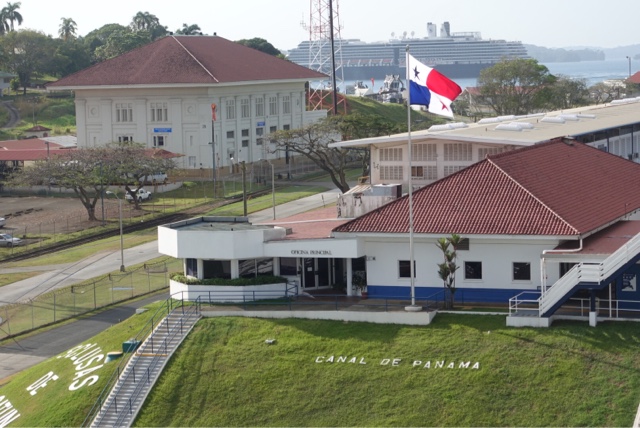 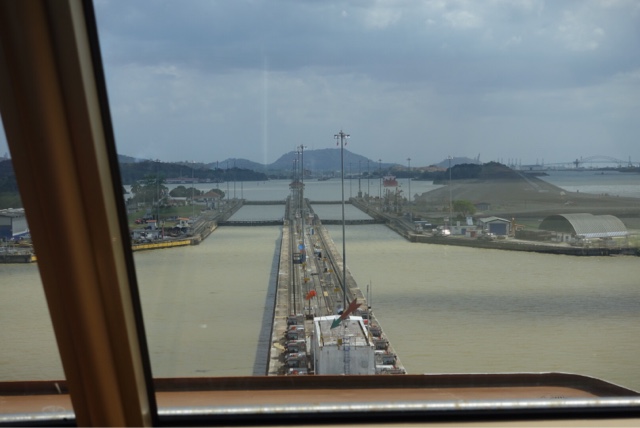 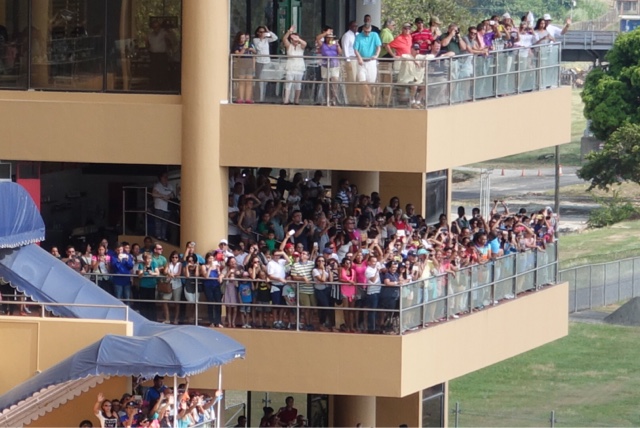 Panamanians and tourists waving and cheering as we went through another set of locks
The weather was hot and steamy though as it always seems to be in Panama. We pretty quickly retreated to have breakfast in the air conditioning. After breakfast, we found a good new spot to needlepoint. It was in the Explorations Café which is the coffee shop/game room/computer area/library of the ship. We found two Eames chairs with ottomans right by the window and we planted ourselves there for the morning. It was a fairly public spot so there was definitely more “And what are you working on?” for my taste but R was in his element. 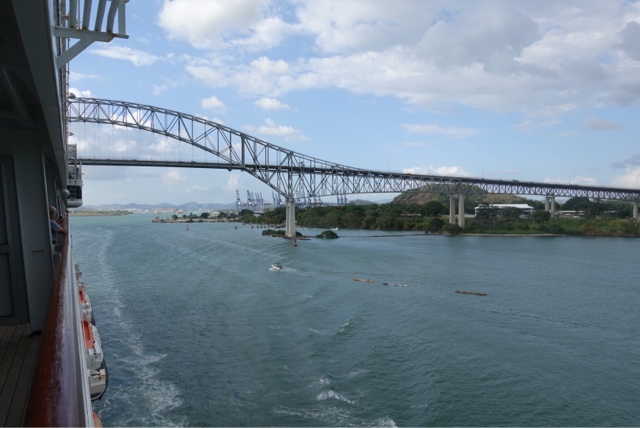 Headed toward the Pacific 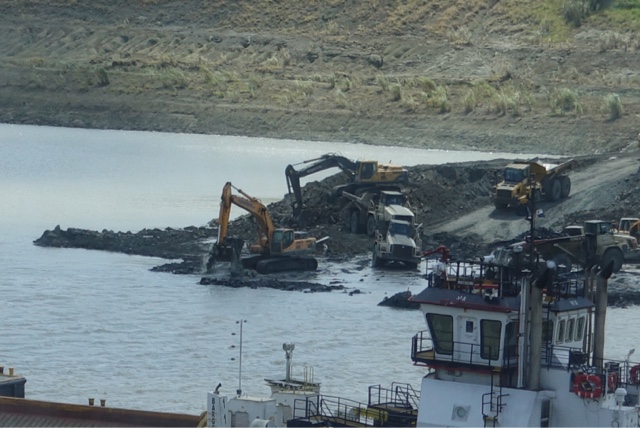 Digging the new canal
After lunch we did the usual – I worked out, R watched a movie and then we met up and went to a lecture on the history of banquets and banqueting at three pm. The woman who has been giving these food history lectures is getting off the ship tomorrow so I will be curious to see what/who replaces her. Later we sat outside on our veranda and needlepointed but eventually it started to rain so we went in and got ready for dinner. 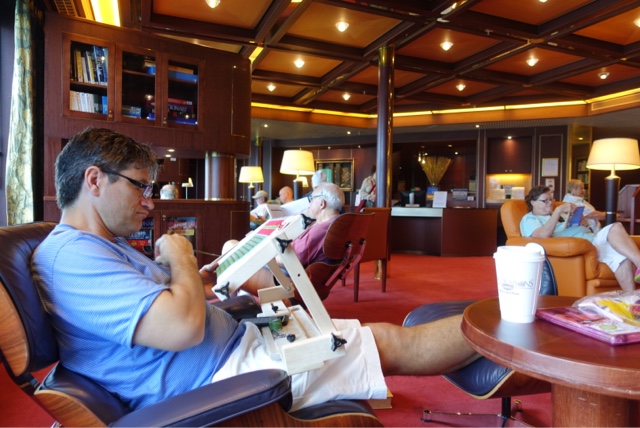 
At dinner tonight everyone was given a Panama hat and Russell and I had a beautiful spot for watching the setting of the sun over the Pacific. It wasn’t the most spectacular sunset ever as there were thick clouds obscuring our view of the actual setting sun but I still enjoyed the sun’s pink reflection off the gray-blue clouds. We finished the day with a visit to the GLBT group up in the “Crow’s Nest” but decided to skip this evening’s entertainment -- a harpsichordist. 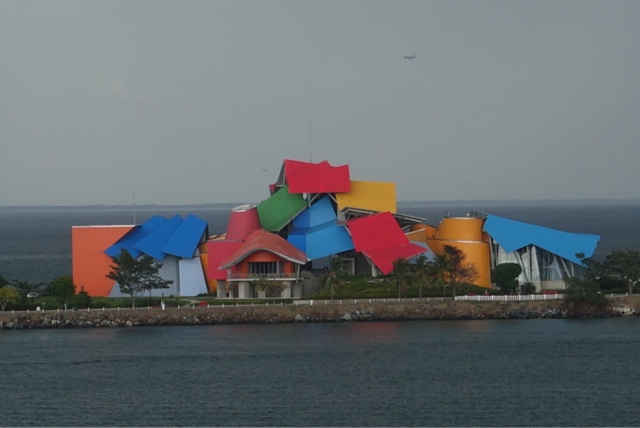 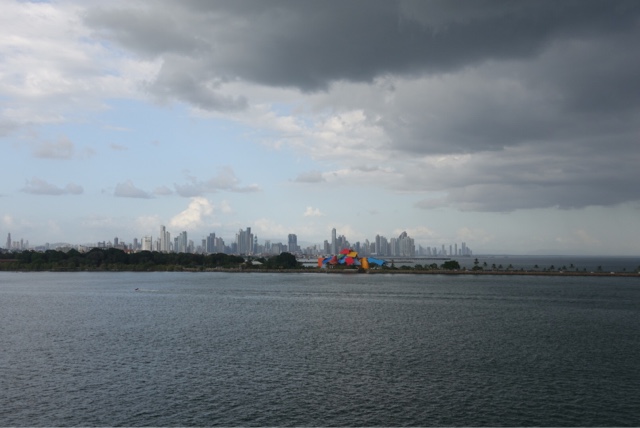 View of Panama City from our boat this evening
Posted by Russell and Stephen at 6:29 PM