Today was our first full day aboard the Amsterdam. We had breakfast in the Pinnacle Grill, which is one of the perks of our new room category. It includes access to a special restaurant for breakfast. You may not think that this would be a big deal but believe me one trip around the Lido Dining Room at eight in the morning with people everywhere, stumbling around, trying to make up their minds about what to have for breakfast and fighting over the limited number of seats is enough to convince just about anyone that a private dining room for breakfast is a very good thing indeed. 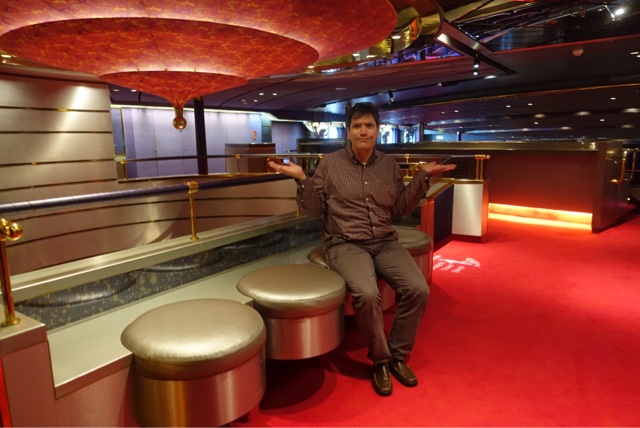 Why? Who is going to sit here?
After breakfast, we went to the Explorer’s Lounge for the “unhosted” knitters and needleworkers get together. We arrived before everyone else did and sat by a window. We were quickly joined by a woman named Barbara who was wearing a mu-mu and liked to talk. A lot. More even than she liked to crochet apparently since she didn’t do but five or six stitches (is that the unit of measure for crochet?). 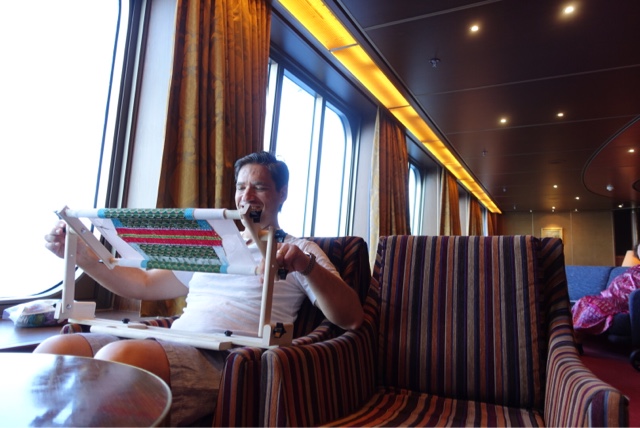 Other people showed up but strangely they all sat at the other end of the big seating area where we were. So, that was kind of weird. I don’t know if they didn’t see us doing our needlework or they just simply felt that the other end of the room was a better place for the get-together. It was mostly knitters and crocheters anyway. There was one woman who was also a needlepointer and she chose to sit with us -- for a while at least but then she too moved on to the other end of the room. Fortunately for Russell he had Barbara – all to himself -- because I had a manicure and pedicure appointment at ten am. I chuckled to myself as I left him because he was very sure that he wanted to spend more time outside of our room stitching in public on this trip. Be careful what you wish for! 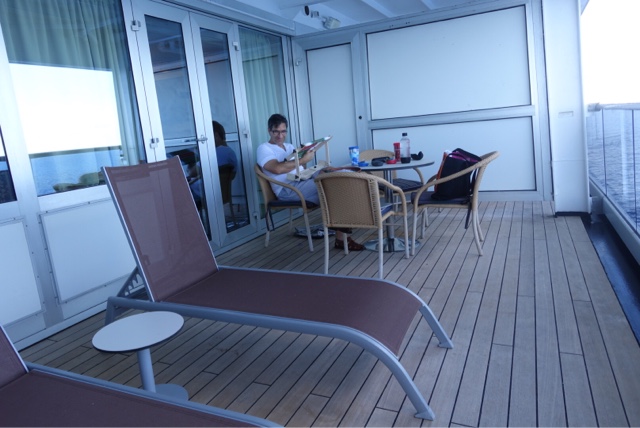 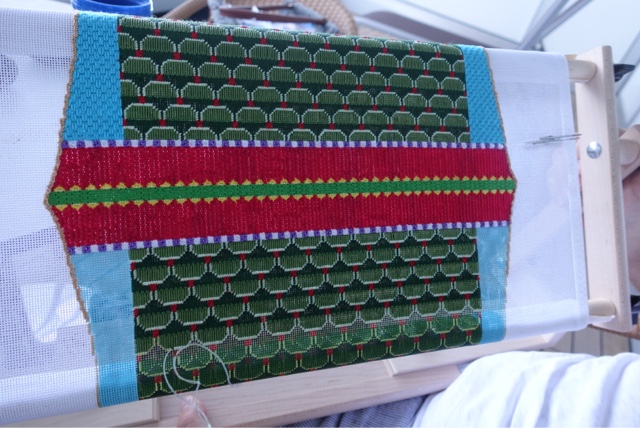 In the afternoon we stopped by the “Atrium on 3” for “board games, Mah Johng and party bridge.” There was one table of four playing cards but no one else came along for us to play with. Most everybody was there to play Mah Johng anyway. We discussed whether we should stay and watch them play so that we could learn how to play but none of them seemed too eager to instruct newcomers. So we left and headed to the dining room where Duplicate Bridge was getting underway at 1:45. We explained to the people at the door that we were advanced beginners and not particularly interested in intense play with self-appointed bridge experts. They were mildly encouraging to us saying something about “players of all abilities” but I don’t think they really meant it. Russell didn’t want to commit to two solid hours of bridge playing anyway so we moved on. 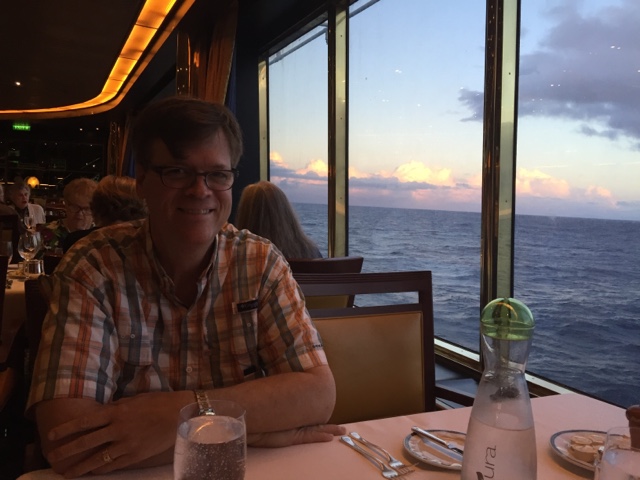 Russell at dinner last night
Eventually I headed off to the gym and Russell watched a movie before his mani/pedi appointment at four. When I first visited the gym yesterday I noticed that in addition to the seven treadmills and six elliptical machines there was a rowing machine. This I figured would be my ace in the hole because not many people use rowing machines and I was worried that the number of elliptical machines and treadmills would not be enough for the number of people on the boat but not to worry because there is a rowing machine. So I went upstairs fully prepared to do some rowing since I expected that the elliptical machines and the treadmills might be occupied. Well, don’t you know there were not a lot of people working out. Most of the elliptical machines were available and a good number of treadmills too but not the rowing machine where one older guy was rather unenthusiastically rowing away. I got on a treadmill but since I had expected that I would need to use the rower I kind of had rowing on the brain. So I watched to see when it would become available. Well this old guy just wouldn’t quit. Finally, after a half an hour of uninspired rowing, he got off the machine but before I had a chance to get on it another older person (this time a woman) snuck on the machine before I had a chance. Well, she rowed even more lethargically (I mean really people this is supposed to be exercise!) but for not quite as long before a third person jumped on the machine and I gave up and surrendered myself to an afternoon of elliptical training. Harrumph. 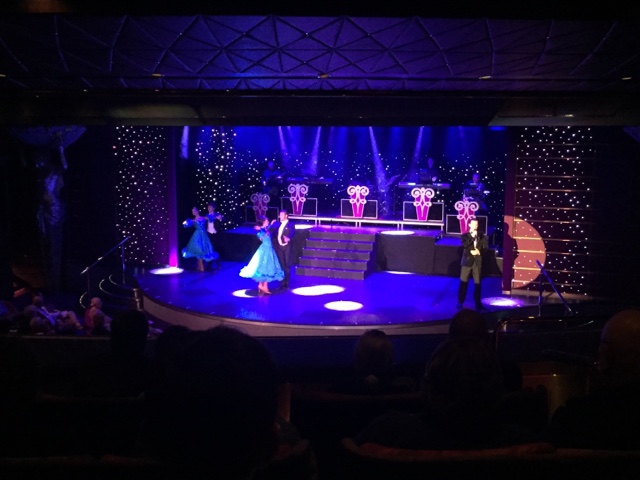 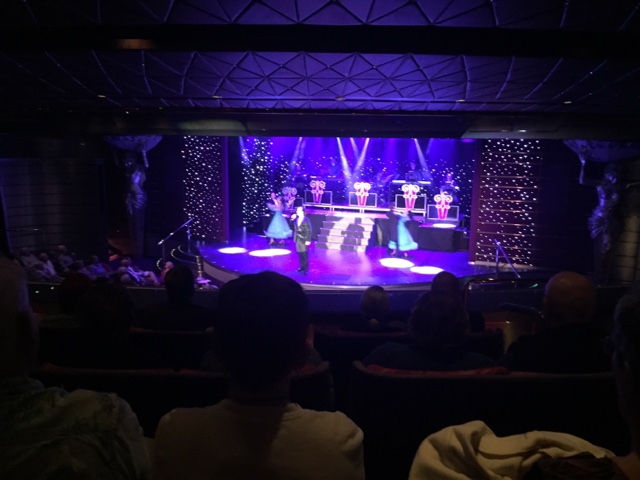 Show last night
Another harrumph came later in the day when I tried uploading my last blog entry. Oh the hoops I have to jump through in order to satisfy you, dear reader. You have no idea. The Wi-Fi on board this ship is a cruel joke. It allows you to log on quickly (relatively) so that they can begin to charge you right away but when it comes to actually getting on a website or uploading a photo or doing anything useful – forget about it. It’s just spinning and spinning and more spinning as the minutes rapidly tick away. After moving to a new location in search of a better signal I concluded that wasn’t the issue. Perhaps the photo files are too large. But trying to change the size of the photo files was neither quick nor easy so I moved on to solution number three. Ye old cell phone. You know, the method that I used all last summer to good effect (recently I have been using the computer to write up my entries thus explaining the sudden expansion in the size of these entries. Sorry.) Anyhow the cell phone did appear to work better than the computer and so after dinner and the lesbian/gay meet & greet at seven o’clock in the Crow’s Nest (which included unsurprisingly no lesbians and mostly just queer gentlemen of “a certain age”) I was able (finally) to upload and post my previous blog entry while waiting for the show to begin in the Queen’s Lounge (who comes up with the names of these places?)

The show was pretty tragic but better than it had to be. I mean there was a band of six people and five dancers and four singers and numerous costume changes (such as they were) and just enough bare male flesh/tight pants to keep R and I from falling asleep (actually sleep wasn’t much of a possibility given the volume and pitch of the singing).

Now I am back in the room and believe it or not I have shortened this entry considerably though it is still too long so if you’ve made it this far, I salute you.
Posted by Russell and Stephen at 10:24 AM