We arrived here in North Palm Beach on New Year’s Eve. The traffic was much lighter than it had been and we made good time. After moving the luggage from the truck into our accommodations we discovered that the cover over the bed of the pick-up truck was unfortunately not waterproof. Our luggage was wet and much of our clothing although not sopping wet still had to be either put through the dryer or spread around the apartment to dry. 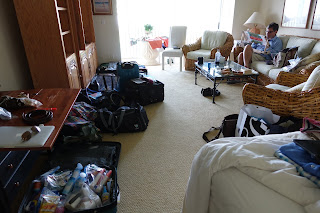 Drying clothes and luggage in apartment – working on the roof to my Nordic Christmas House. 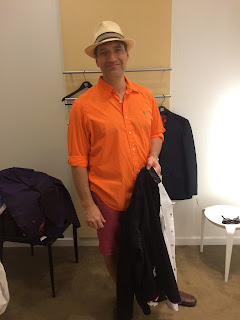 Entering cruise mode with a new hat and shirt. If this shirt is not very orange on your computer screen you need to adjust your monitor. 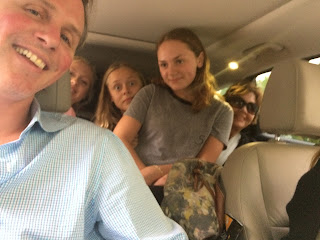 Russell’s sister’s family – Dave (her partner) -- front left, Karen’s three daughters in rear and yes, his Mom all jammed into a Ford Escape on their way to the airport for the flight home (obviously Phyllis wasn’t flying home, she was just going to say goodbye and drive the car back)

We passed a quiet New Year’s Eve, in bed by 11:00 pm. On New Year’s Day, we actually went shopping at the Palm Beach Gardens Mall which I have to confess is one of my favorite malls (it has both a Saks Fifth Avenue and a Ferragamo store). It was open on New Year’s Day and there was hardly anyone there which was of course a nice change of pace from the pre-Christmas crowds. Dinner on New Year’s Day was with Phyllis (Russell’s Mom), Howard (her husband), Brad (Russell’s eldest brother) and Hadley (Brad’s wife) at the “club”. It was advertised as a special seafood buffet so I had low expectations for vegan food options but was pleasantly surprised to discover a tofu dish and a large salad bar so it all worked out fine. 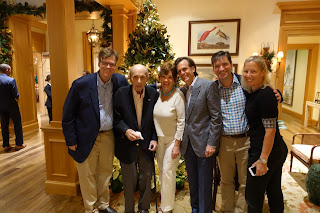 On New Year’s Day we also discovered a wonderful restaurant not far from here called Christopher’s Kitchen. It advertises itself as an organic, plant-based restaurant. They shy away from calling themselves vegan because some of the dishes contain honey. The food here was fantastic. We returned several times including one day when we had two meals (lunch and dinner) there. We took our friends Nancy and Bill here and Bill who is not the most adventuresome eater was a real good sport (I think the beer on tap might hae helped!). We also took Russell’s brother Steve there for lunch, Howard and Phyllis for brunch, and Marge (Russell’s family’s former housekeeper) for dinner. It was a lot of meals in the same place but fortunately they have a large menu and all the food was very good. The ambiance – we mostly sat outdoors, enjoying a little plaza complete with water feature – was also terrific. 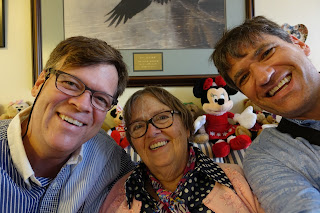 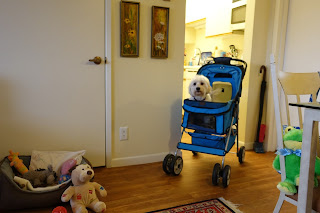 Alvin, Marge’s dog, must be in a stroller on his way into and out of the building!

The weather was cooler today with a breeze but it has been quite warm with temperatures well into the eighties and high humidity (making jogging a real challenge). Today and yesterday however temps were in the upper sixties/low seventies, a more normal temperature for this time of year. 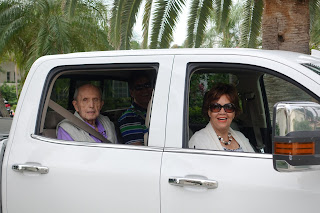 Phyllis and Howard in what I suspect is their first ride in a pick-up!

Today, once again, we went out to lunch with another couple, Bill and JeffAnn. We met them on an RV tour of the Gaspe and Maritimes and we’ve stayed in touch through the years. They are lots of fun and we shared a most enjoyable meal together. And, as if that wasn’t enough meals eaten out, we went out again tonight for dinner with Howard, Phyllis and Steve at a seafood establishment. Confronted with lots of non-vegan food choices we were nevertheless able to navigate our way successfully with a house salad and a no-cheese, no seafood pasta entrée. 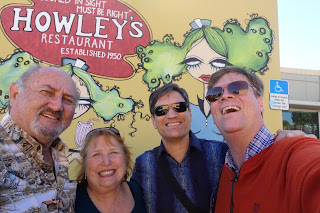 Tomorrow we must pack up our luggage and make our way to the boat in Port Everglades. We expect to board around 1:30 pm. The forecast isn’t so good – 71 degrees and rain but hopefully we will not be spending too much time outdoors. The ship is not due to depart until 11:00 pm which is rather unusual. Normally departure time would be in the late afternoon so I am not sure why the later departure time. I suppose it may have something to do with the extended nature of the trip and needing more time to load supplies. Just a guess. Will report more tomorrow with pictures.
Posted by Russell and Stephen at 7:16 AM