Just a quick blog entry to let you know that we are well. We are nearing the end of the longest stretch of “at sea” days of this voyage – eight in total. Obviously it is a long way from Panama to the Marquesas Islands. We crossed the equator a couple of days ago and are now in the southern hemisphere where we will stay for the next month or so. A couple of days before that we cruised by the Galapagos Islands. We couldn’t see them mind you but I tell you this anyhow so that you can get an idea of where we have been for the last week. 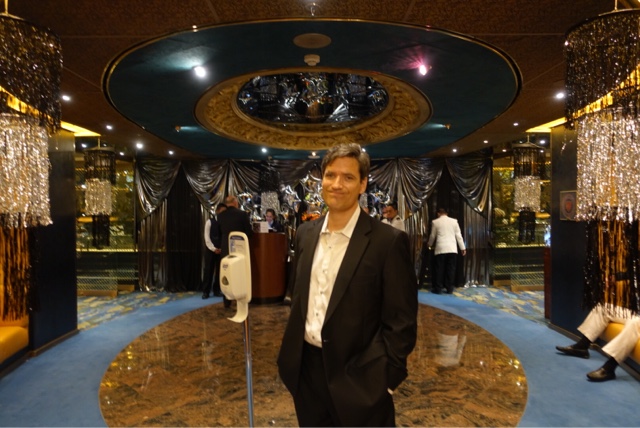 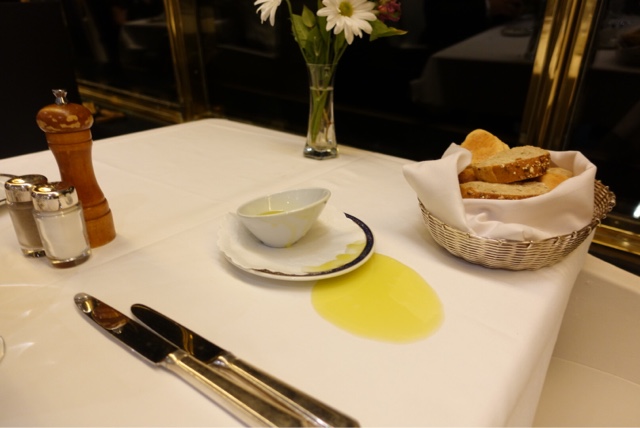 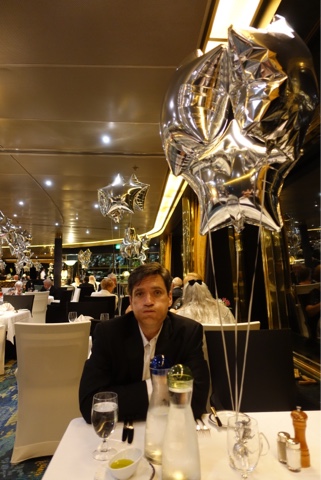 See previous entry for explanation of these photos! Didn't realize I had them.
Our days are pretty much the same. We have breakfast in the Pinnacle Grill (soy milk muesli if you must know plus toast with jam or peanut butter).  Then we head off to the Explorer’s Lounge where we try to find (and usually succeed in finding) a couple of seats by the window. At ten o’clock there is an advertised (in the daily program) meeting of knitters and needle workers. Usually we attend. Sometimes we will go to a different location and needlepoint there. One day we went to the Crow’s Nest (a lounge at the top of the ship). It had good light and was quiet so we returned the next day only to discover a steady stream of classes, culminating in a “learn to play the ukulele” class that is what finally pushed us over the edge! 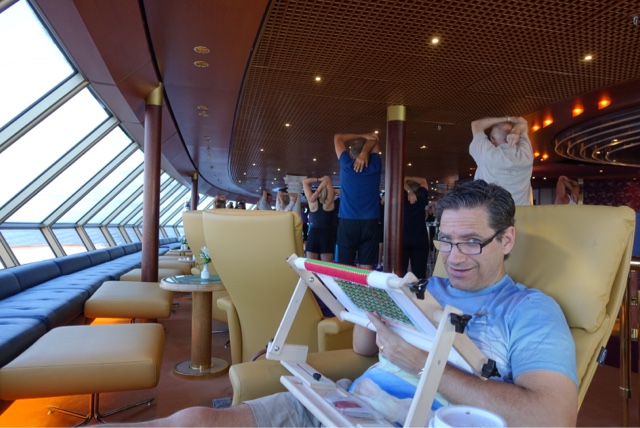 Note the stretching class going on behind me. 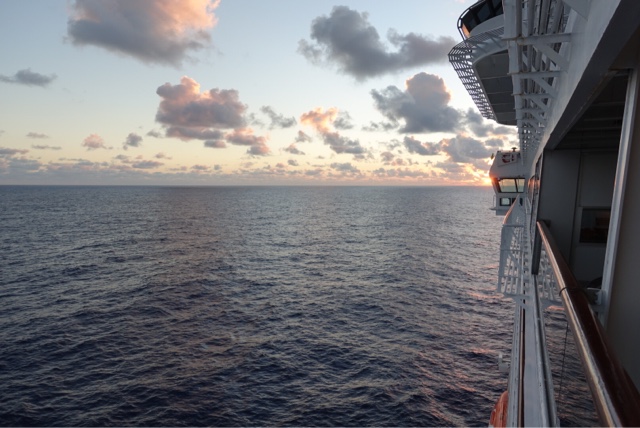 Sunset is at five p.m.
Anyhow, since the knitting and needle workers’ group is advertised in the daily program it makes it so that we can kind of take over the Explorer’s Lounge and be as loud as we want and nobody can complain because “Hey, this is the knitting and needle workers’ meeting place.” I like that though I must confess that all the people and the talking and the “May I see what you are doing?” to be a bit much from time to time (thus explaining the partially-successful excursion to the Crow’s Nest). I’ve been pretty good though I have to say. Most of the time I show people what I am working on and I stop working to chat with them for a bit and I am pretty sure that I haven’t rolled my eyes once yet nor have I sneered or pretended not to hear someone when they were talking to me. 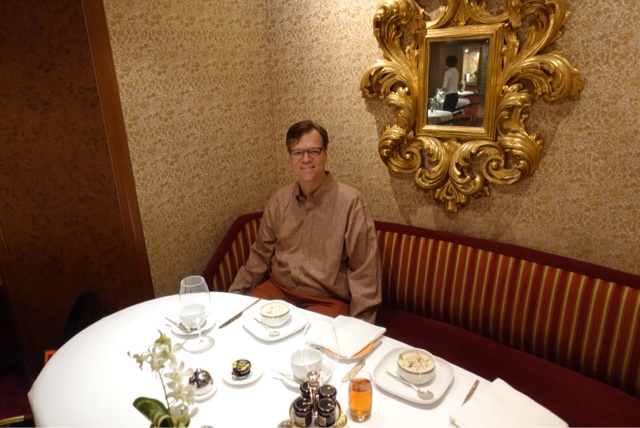 Our table at breakfast
Sometimes we attend a lecture in the late morning or in the afternoon. We went to one on giant squids and another on the Marianas Trench. Russell usually finds a spot to needlepoint in the afternoon while I go to the gym and then we meet up back at the room and needlepoint on our veranda in the afternoon. Dinner is early but then again so is the sunset (5:00 pm). 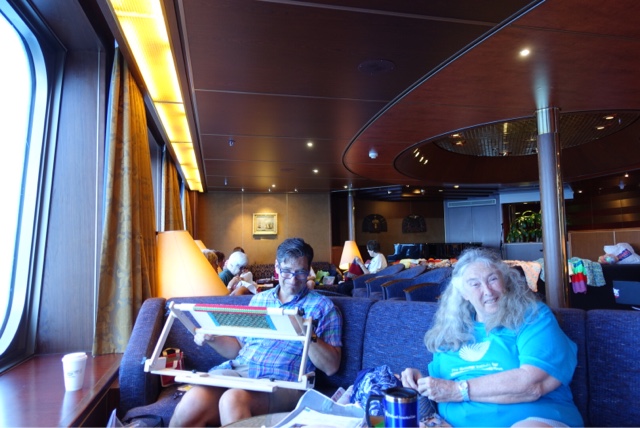 That's Connie -- she's a knitter from New Mexico
We’ve turned our clocks back five times I think so far. Perhaps its only been four times (the last time was for one half hour only – don’t ask me). We’ve had a couple of days to adjust, meaning there have been no time changes in the last two days but there is no daylight savings time where we are either. So, the sun rises at four forty five in the morning (no joke) and it is bright by five a.m. This caused us to wake up rather early for a few days but we are now back to our usual wake up time. 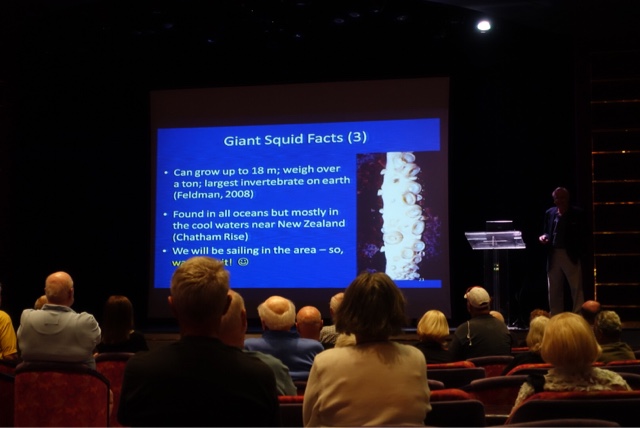 Self-explanatory
In the evening I am afraid that we have mostly been missing the entertainment. We did go to the marionette guy who I told you about. But other than that there has been a dancing couple (“take a journey around the world with …”), a comic, etc. Tonight there was a “game show” which featured “your cruise director” and other staff members answering questions and trying to be funny. It wasn’t and we left early.
R is getting a little antsy but me I feel okay. I could do this routine for a few more days but it is probably a good thing that we have several stops coming up. Part of the problem for R is the food situation which is turning out to be rather frustrating. We are trying to be flexible and not too demanding but the ship is really not set up well for vegans. We’ve had many meals that consisted of side dishes cobbled together from the regular menu and we’ve had other meals selected from the special vegan/vegetarian menu but it seems that they do not put too much emphasis on those dishes because the quality (and presentation) can be spotty. We are doing our best to remain strong and for the most part I think that we are doing a very good job – no waffles, cookies, ice cream, steaks, etc. But I am certain that we both will be ready for some of Russell’s good vegan food when we return home.
Posted by Russell and Stephen at 10:12 PM