Today we visited Avatoru, Rangiroa – quite a mouthful, I know. It is another island in French Polynesia however it is completely different from Nuku Hiva (the last island we visited). 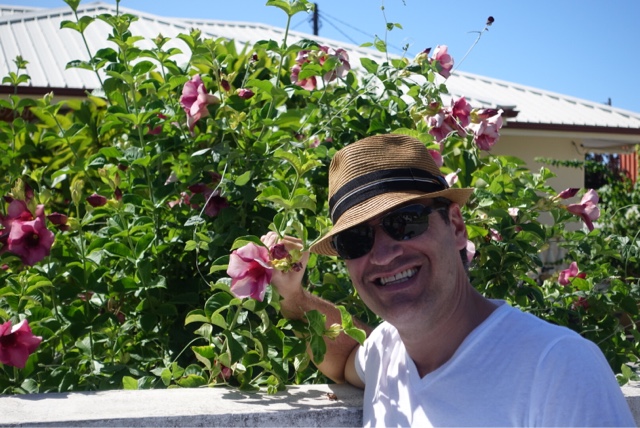 Lots of tropical flowers (no not me!) 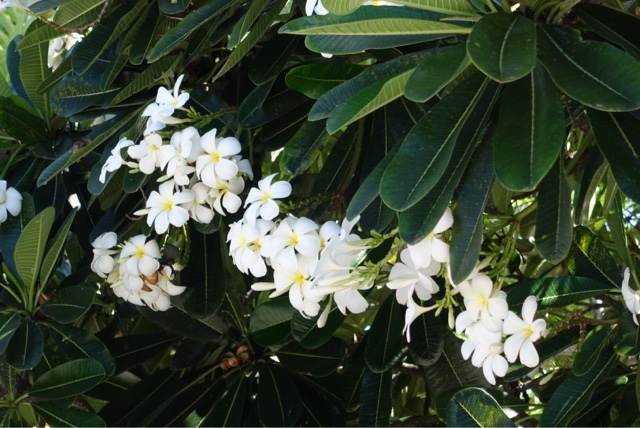 Frangipani-- smells delicious
Before I go much further about Rangiroa, I want to tell you about our day at sea on Thursday. The highlight of the day came in the afternoon when Russell and I went out of our box and joined the duplicate bridge group for an afternoon of play. There are probably sixty or so dedicated bridge players on board. Early in the trip, as you may recall, we tried to find another couple to play “party bridge” with us but no such luck. We then approached the bridge instructors and explained to them that we had never played duplicate bridge before but that we have played a considerable amount of rubber bridge. They seemed not to know what to make of us (a fairly common reaction we get) and so we held back. Later, we attended a couple of bridge lessons and got to know the instructors better thus leading up to our taking the plunge yesterday. 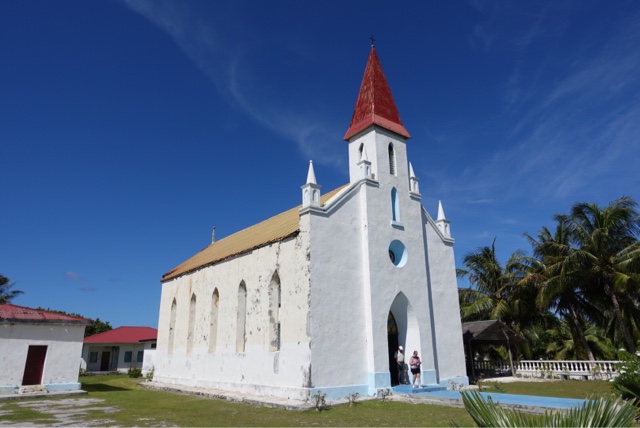 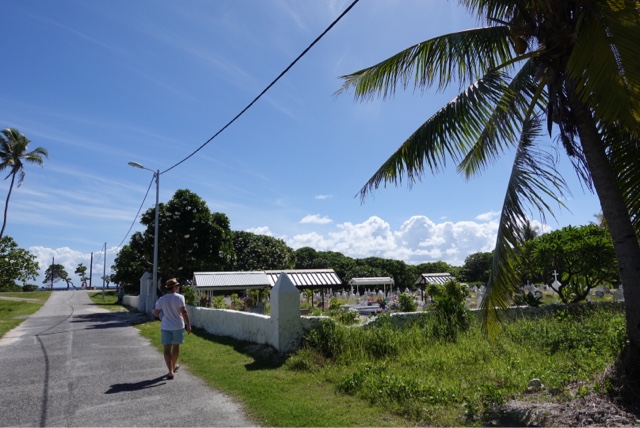 The Catholic cemetery
I have to tell you it was a bit stressful. I know I shouldn’t say that (please don’t smack me again) because we are not working and we are on a cruise and it’s bridge -- so really how stressful could it have been? Well, the answer is – pretty stressful. Fortunately we played with the beginners rather than the intermediate/advanced players so they were patient with us but there is a lot to learn. Like: no snapping of cards. And no unnecessary chatter. Count your cards before looking at them. Initial the scorecard in the upper right hand box. East-West players go to the next higher table while the cards go in the opposite direction. Etc., etc. These people are definitely rule-bound. Then, of course, there is the matter of just playing the cards themselves, which in my case is no easy task. I managed for the most part to avoid committing a lot of egregious errors and, lo and behold, the two of us won the afternoon’s match, garnering our first “master points”. Talk about dumb luck! I am still scratching my head over how we managed to pull that off but I’ll take it. 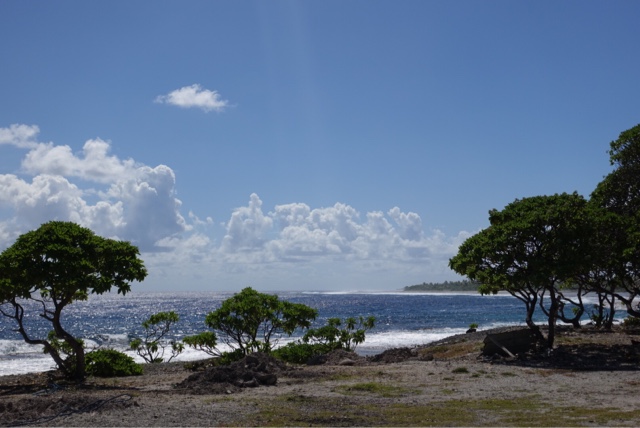 The Pacific side of the island 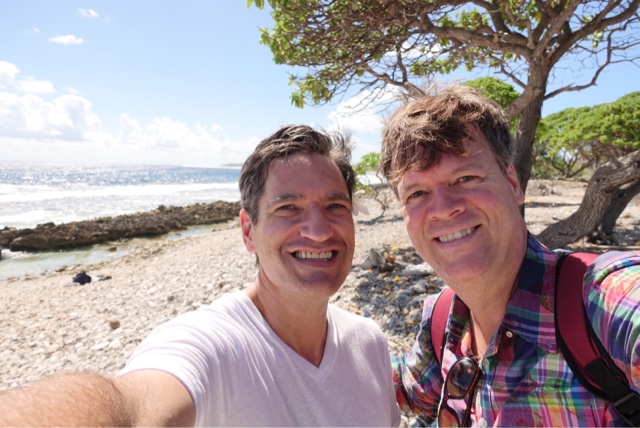 Your intrepid duo
So, that was our day at sea. Now, back to Rangiroa. I mentioned that it was totally different from Nuku Hiva. Rangiroa is an atoll, which means that it is basically a very flat, long, narrow island that encircles a gigantic “lagoon” (not like on Gilligan’s Island – this lagoon is big, big, big). The highest point on the island can’t be more than twenty feet so one wonders how on earth the place has managed to survive storms and flooding, etc. But it has. Not that there is much there. A post office. A mom and pop grocery store. City Hall. A couple of churches (one Catholic, one evangelical (I think)). Same for the cemeteries – one Catholic, one not. And then there are the houses. Many of which look like a strong storm would take them down. Windows appear to be optional. As does furniture. Curtains, however, in various Polynesian prints, are a must. There were cars on the island -- in addition, obviously, to a lot of boats – so, there must have been gas available somewhere though I did not see it. And then there were, of course, the residents – most of whom were dark-skinned, of medium height and stocky build with broad facial features and dark hair. 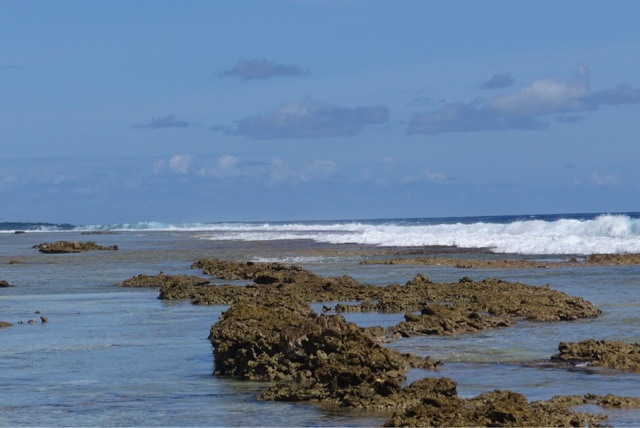 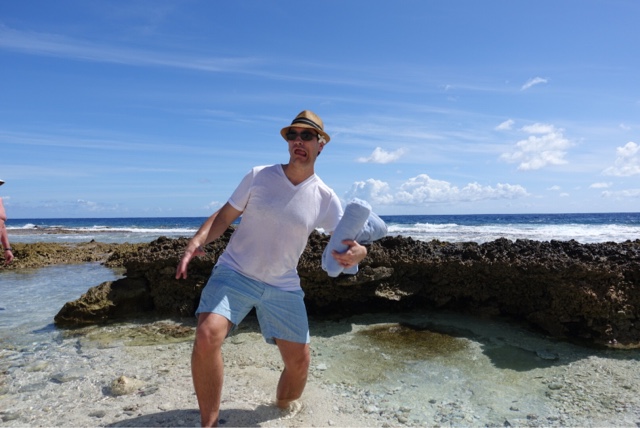 Whoa quicksand! My first dip in the South Pacific however awkward.
Russell and I got an early start this morning having eaten breakfast and ridden the tender to the island before nine a.m. We had no tour today and instead just walked around the island aimlessly. We checked out the church, the cemeteries. Enjoyed lots of frangipani blossoms and their exquisite fragrance. Saw the Pacific side of the island where the waves were crashing and there were lots of rocks, ledges and pools. Here, I was able finally to put my feet in the South Pacific. 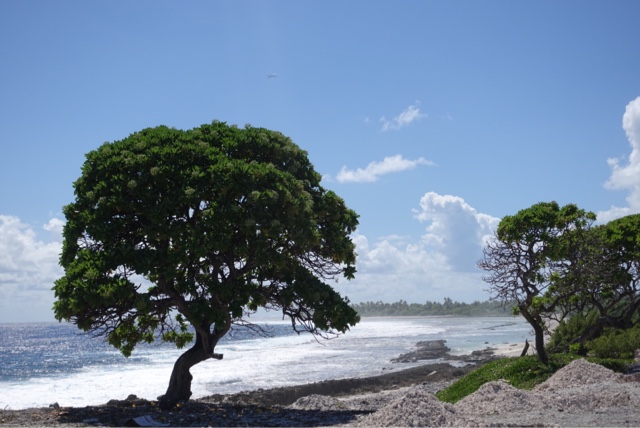 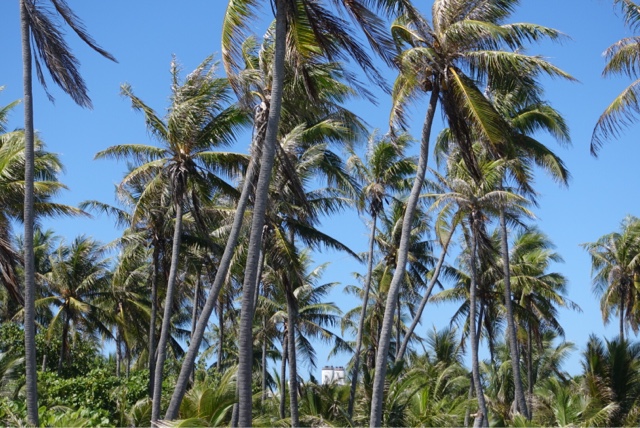 Lots of palm trees. Note the boat's smokestack (center, rear)
Later, we found a free part of the coastline, seemingly unclaimed by any property owner, where we were able to go in the water and do some snorkeling. The water was beyond glorious. Perfect temperature, deep turquoise blue. Russell came prepared having assembled our snorkeling gear the night before. He even brought with him our surf booties (these have not been used in years). And you thought all that luggage we brought was filled with junk! Hah. 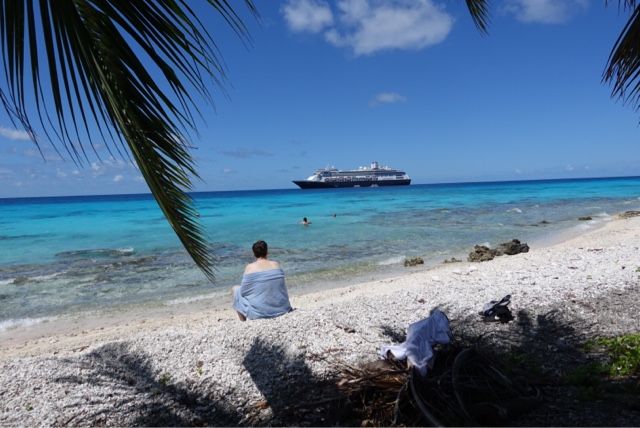 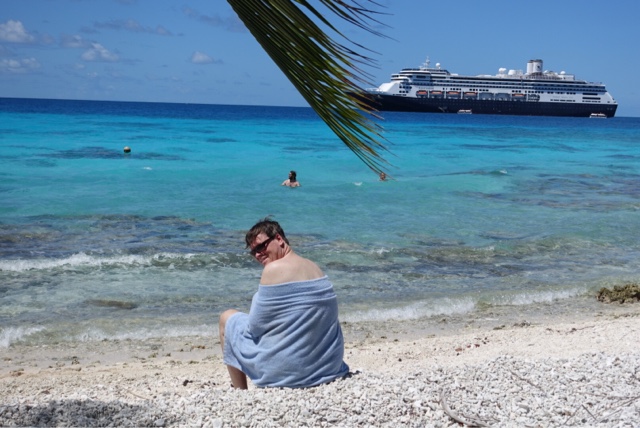 Close up
We snorkeled together and observed plenty of tropical fish feeding about the coral. The coral itself looked not so healthy to me. I fear that it was “bleached out” due to global warming but I could be wrong. Still, there seemed to be just one variety of coral still surviving and it was none too numerous. Anyhow, we had a marvelous time following the colorful fish (until one of them bit Russell). It was still however one of those peak experiences that will go into our memory banks forever. 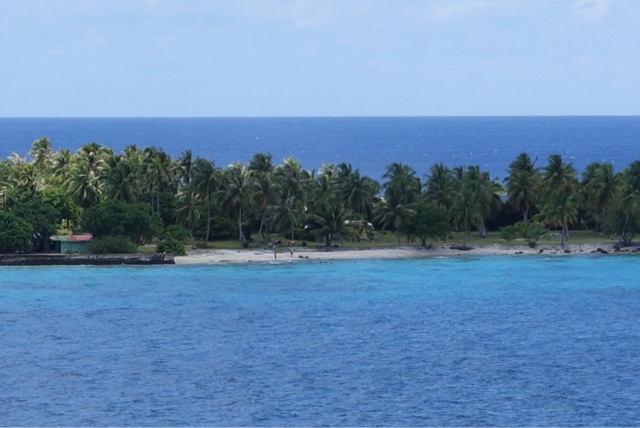 View of island from our veranda
We were back on the ship in time for lunch and spent most of the afternoon sitting on our veranda stitching happily in the breezy 84-degree shade, watching the palm trees sway and hearing all about “snow-mageddon” on the television. 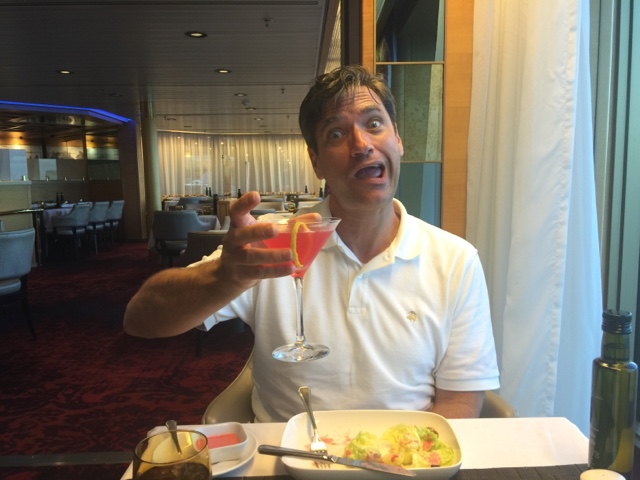 Enjoying my mock-tail! Perhaps a little too much.
Tonight, we had a delicious dinner at Caneletto, which is one of the extra-cost restaurants on board the ship. I had a “mock-tail” (no alcohol) and we enjoyed a view of the setting sun while munching on portabella mushrooms with spaghetti made from squash and carrots. 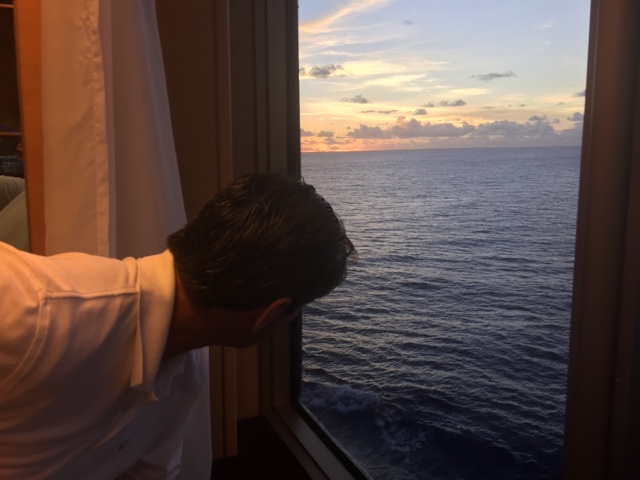 Sunset
It was a truly perfect day. Makes me wonder when the other shoe will drop but I am trying to just be okay with everything being okay. Harder than you might think. But not as hard as shoveling snow! (I just couldn’t resist!) 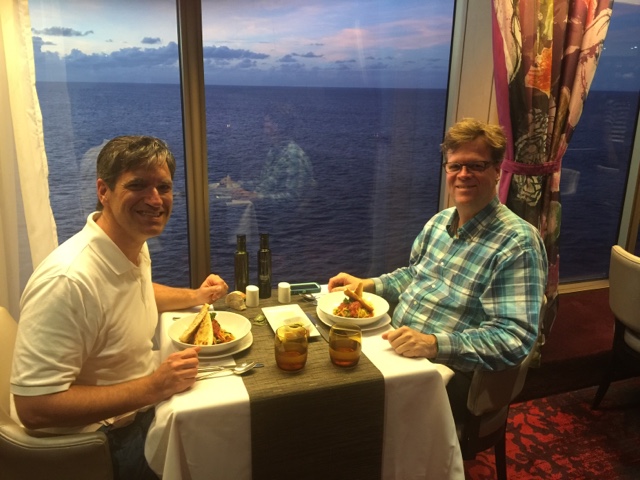 Hello Russell, oh and you too Russell in the window!
Posted by Russell and Stephen at 9:08 AM