Today we visited Panama City. I had thought that we had been here before but I must confess that not a lot of what I saw today seemed familiar to me so I am beginning to wonder whether we did stop here or not. Russell thinks that we were supposed to have stopped here but that something (either a late arrival or perhaps bad weather) prevented us from going into the city. Either way, it all seemed new to me. 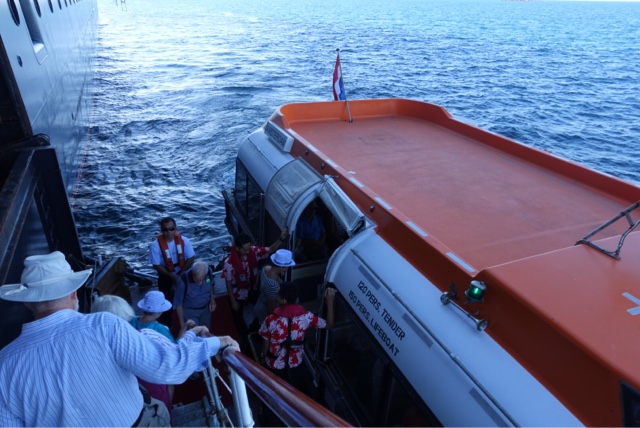 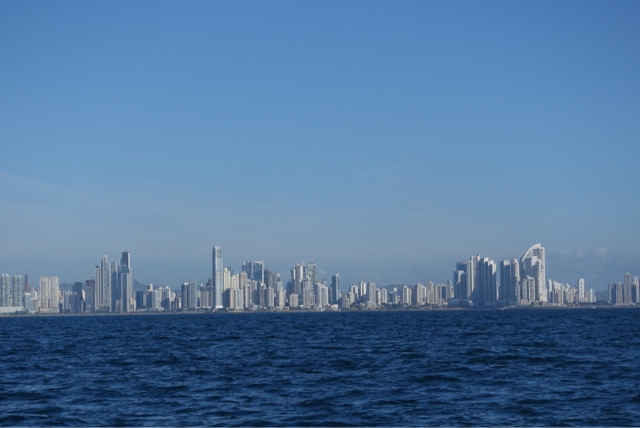 Panama City from the water 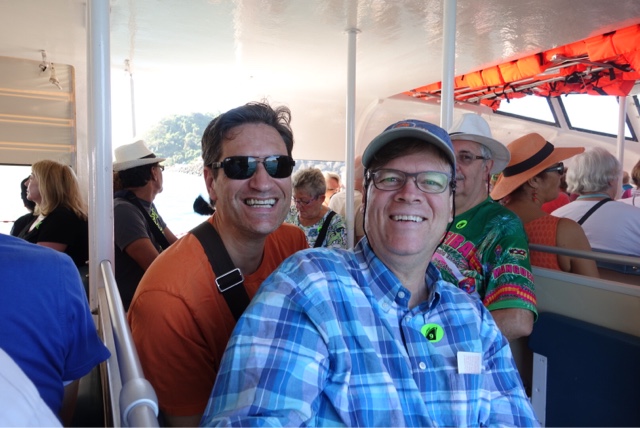 Our tour was described as “A Walk Around Old Panama.” This proved to be a fairly accurate description of what we did. However, what the title failed to mention is that there are two Old Panamas – one is entitled Panama Viejo (Old Panama) and the other Casco Antiguo (Old Quarter). Panama Viejo is the older of the two but it was the second we visited. 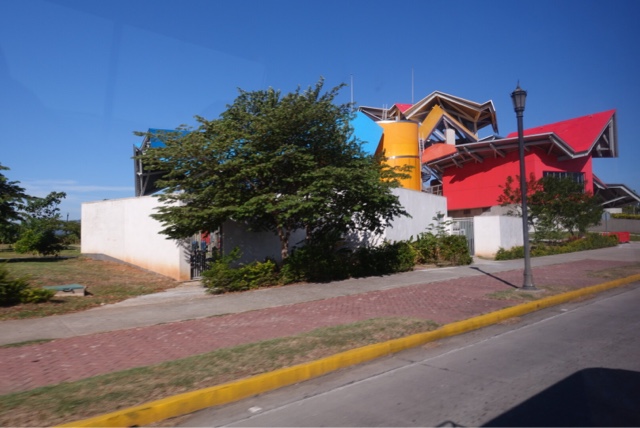 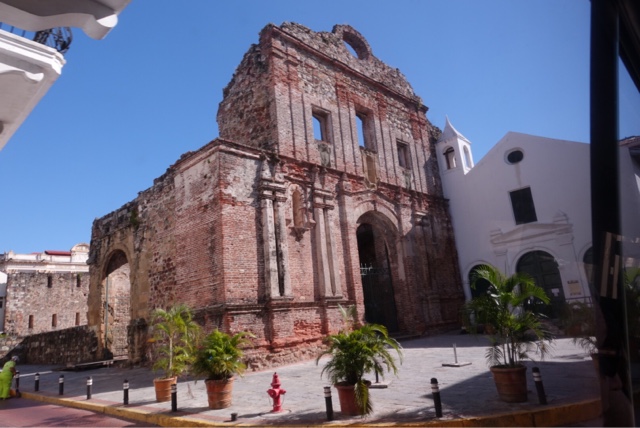 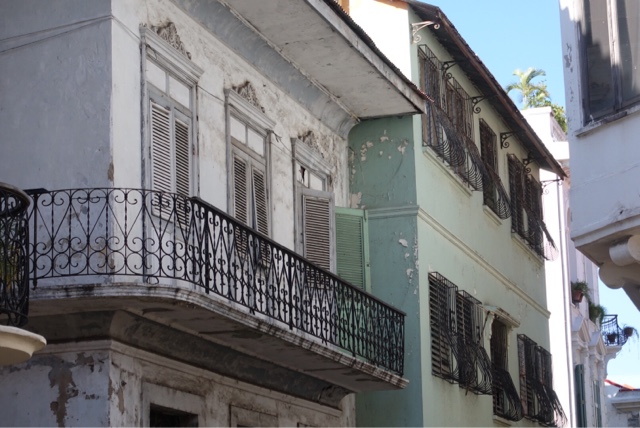 Our first walking tour was of Casco Antiguo which is an old section of Panama City located by the Pacific (actually the whole city fronts the Pacific). It is a section of the city with small streets, little parking, old colonial buildings with decorative ironwork and balconies. Think of it as a more tropical version of the French Quarter in New Orleans. It’s also mostly a residential rather than commercial area. Many of the buildings remain un-renovated and Russell enjoyed the contrast between renovated and occupied buildings next to un-renovated and frequently abandoned properties. 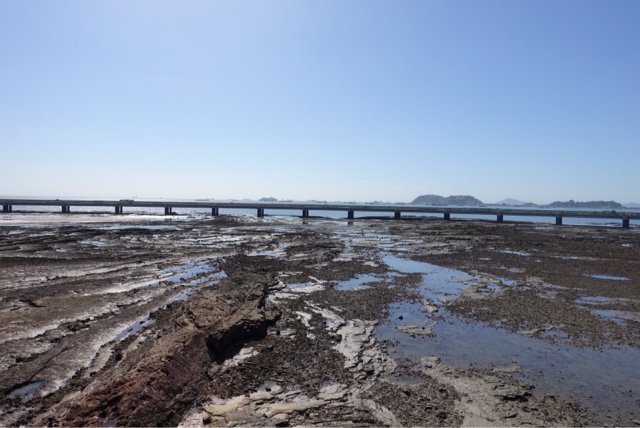 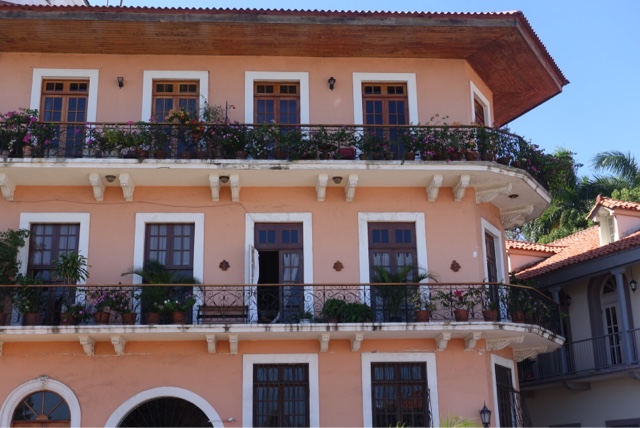 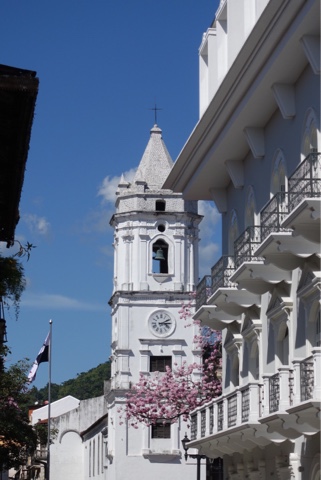 Cathedral
Back in our “bus,” which consisted of twenty narrow seats with a tiny aisle down the middle and a transmission that sounded as if we were going to blow the engine at any minute, we headed off for a drive to the other side of Panama City. Along the way we were able to glimpse modern Panama City which consists primarily of countless high-rise condominium buildings. There are less than four million people in Panama and only one million five hundred thousand live in the capital but I am pretty sure each and every one of them owns at least one condominium! Each of the buildings was more forgettable than the last with only a couple of exceptions (the Frank Gehry designed Museum of Biodiversity and the “Screwdriver”).  There is also not much street life – shopping, restaurants, etc. It would seem that Panamanians do all their shopping in malls and get from one place to another via air-conditioned cars only (I didn’t see much evidence of walkers or public transportation). 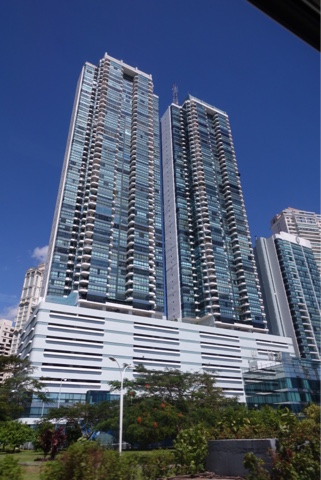 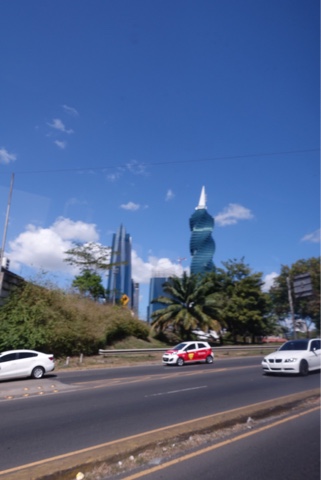 This one was interesting-- it's called the screwdriver by locals
Our second stop was a small museum that displayed artifacts recovered from the site of Old Panama. The Old Panama site is the original location of Panama City. It burned down in 16XX and the city was moved further to the west where it was re-built. The ruins of Old Panama were raided for building material of Casco Antiguo so what remains at Panama Viejo is just a partially disassembled wall here, a re-built bell tower there, etc. However the site is large and even in some parts shaded. It’s location is not far from the sea though you cannot see the water from the ruins (too much vegetation in the way). 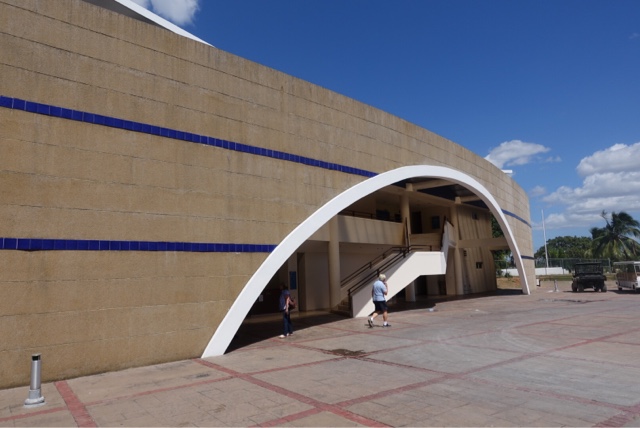 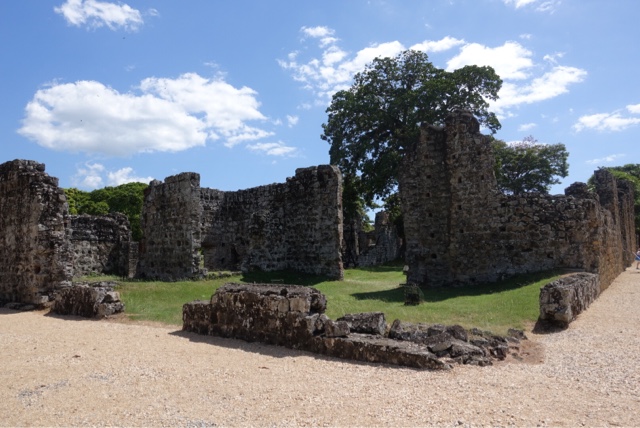 Old Panama ruins
Back in the circus bus we returned to our tender pier. We had to tender in because the tidal difference, which is quite dramatic, makes, I imagine, building a deep-water port impractical. The tour lasted over five hours. It was supposed to last only for four. 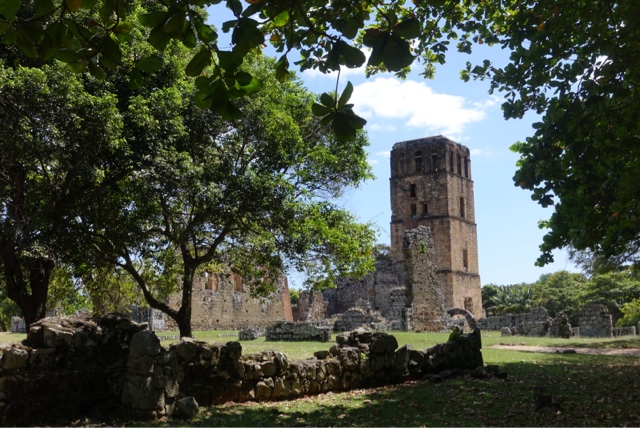 Good pic Russell!
Our tour guide, Jorge, was enthusiastic and knowledgeable. Plus he said that we as a group had taught him something. He had encouraged us not to visit the Cathedral in the Casco Antigua (“not worth it” he said) but we were sitting in front of the building waiting for our bus to pick us up for a while so a few members of the group went inside and encouraged others to do the same and later the group told Jorge that visiting the cathedral was worthwhile and that he should not be ashamed to show it off as he indeed seemed to be. He said that he would never again be embarrassed about the state of the Cathedral and that was nice to hear. No sense in doing that. It is what it is. (Truthfully, the Cathedral isn’t much. It appears to have been stripped of all its decoration except for a carved wooden altarpiece. I could understand why he was uncomfortable with people visiting it as it is not like some Spanish colonial churches that are richly decorated. Still I encouraged him to show it off along with the others because its simplicity and humble nature reflect the surrounding community. Of course, perhaps that is precisely what he was afraid of.) 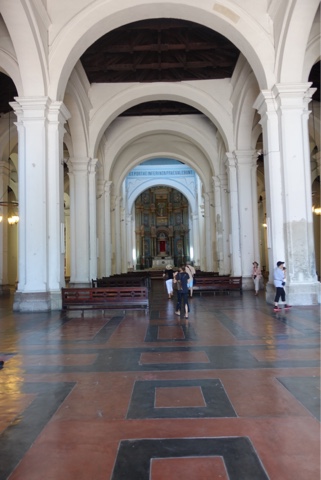 Cathedral interior
Back on the boat we passed our usual afternoon and evening. We did however attend tonight’s entertainment -- a highly touted marionette performance. We probably would not have gone had we not met the marionette artist himself. We told him that we would be there to support him. Well, he hardly needed our support. The theatre was packed when we arrived twenty minutes before show time. And, his skill as a marionette master was quite impressive. His “dolls” each had their own personalities and he handled them with extreme sensitivity. I felt like a kid while watching the show and at the end he received a standing ovation. 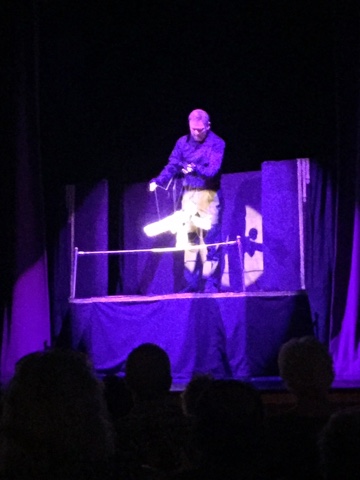 Sorry this photo didn't turn out so well -- I took it with my phone
Posted by Russell and Stephen at 6:01 AM