Today we visited the island of Nuku Hiva in French Polynesia. This isolated island is one of two major islands in the Marquesas chain. We dropped anchor in the bay and used tenders to get ashore. Russell and I had signed up for a four-wheel drive exploration of the island. The description of this tour included warnings regarding the undeveloped state of tourist infrastructure on the island and the need for patience so we were a little trepidatious. 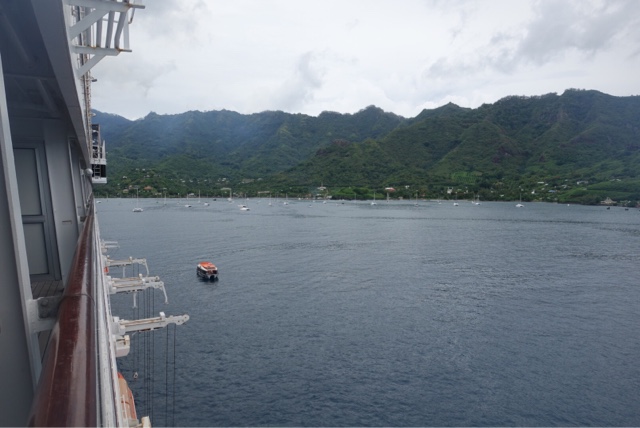 Early morning view from our room 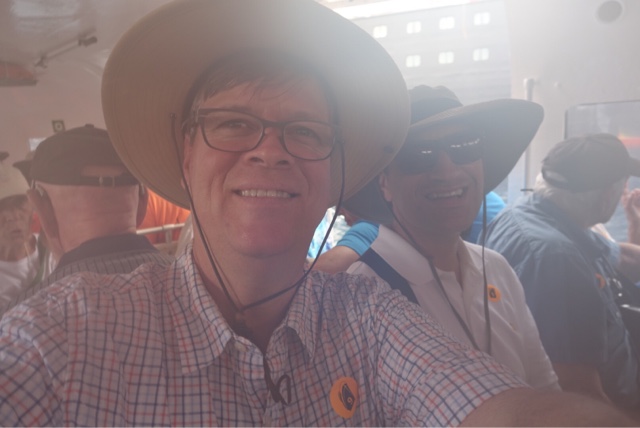 Did I mention it was humid?
Once we made it ashore after a stifling tender ride the group was subdivided into units of four and assigned a vehicle number. The vehicles were primarily private cars (SUVs) and in the tour description it said very specifically that we would have to sit with three passengers in the rear seat and one in the front seat. Naturally, I assumed that Russell being the largest person would get the front seat but one of the other two people that were assigned to our vehicle was not in the greatest physical condition (despite the fact that this was described as an active tour and people with physical limitations were not recommended to go on this tour – grrrrr!) Anyhow, this physically limited gal made it pretty clear right away that she wanted at the very least to share the front seat and so we quite uncharacteristically decided to just let her have it. Our car did have air conditioning which we were had been told was not a given. Polynesian musicians to welcome us 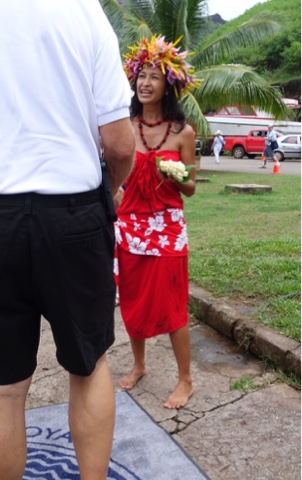 And don't forget the ladies 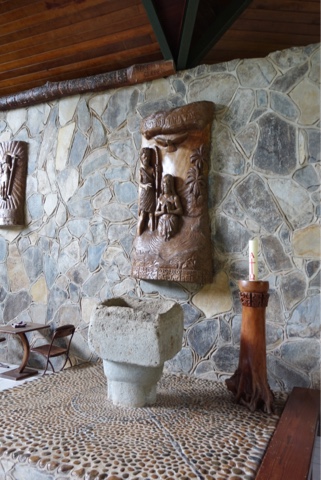 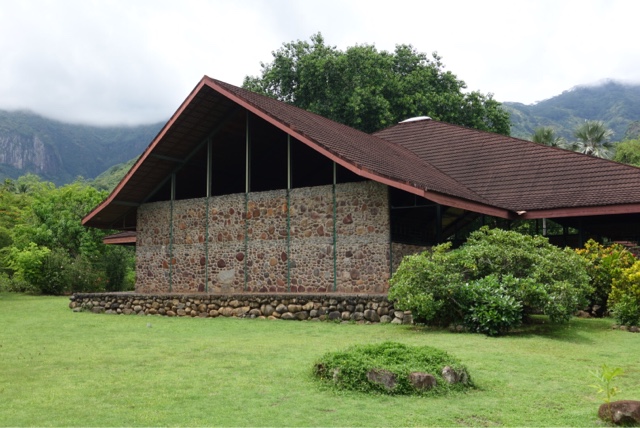 The Cathedral -- open at eaves
The air conditioning got quite a work out too, I must say. It was humid. Yikes. And in the low to mid eighties with cloudy skies. To add to the humidity there were occasional brief showers. Our tour started in the little town of Taiohae (don’t ask me) such as it was. Not much there there. However, I did see a couple of places where you could buy seashell or carved wood jewelry. The natives were, not surprisingly, very Polynesian looking: big boned with brown lustrous skin and flowers in their black hair also the occasional tattoo.

At first glance the island appeared to me rather more prosperous than I would have imagined. The cars were new and the people seemed well fed and clothed. The homes seemed big. However, later I did see some houses that were pretty basic with kids in underwear and laundry hanging out to dry over the muddy “yard”. Roosters were omnipresent and there were also a lot of horses (parked by the side of the road where they grazed on the vegetation) and stray dogs (who were quite obviously not neutered – gross). 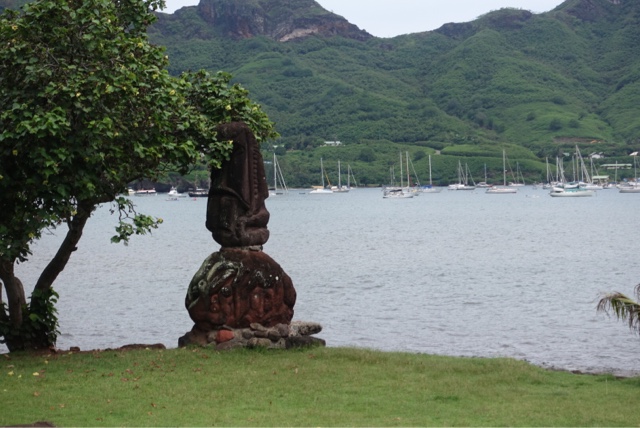 The view in one direction 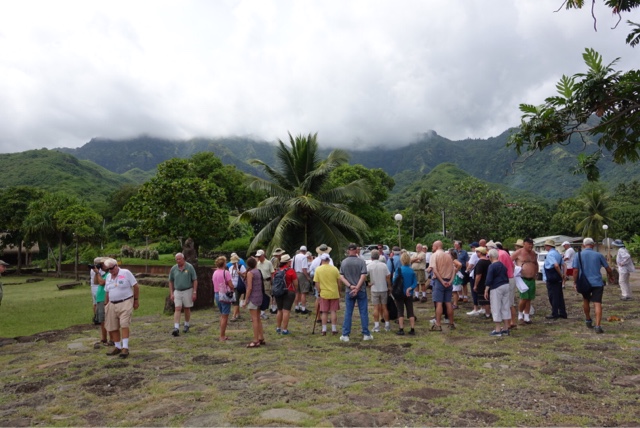 And in the other direction
We stopped at several places on our tour of the island. Probably the spot that I enjoyed the most was the Catholic Church which was built in 1975 and was partially open to the elements. The building consisted of stones taken from all the different Marquesas Islands and featured woodcarvings done by natives. It was nothing particularly fancy but it seemed most appropriate to the surroundings and very functional and well loved. 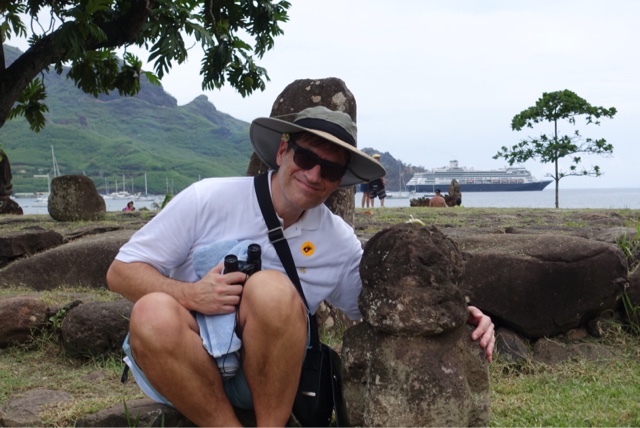 Me and my new friend -- who, big bonus, doesn't talk! (Can you tell I've been needlepointing with the gals too much?) That little dot is the ship and no there is nothing wrong with your screen they put a power line right in the middle of the best view to be had on the island -- grrrr!
We also stopped at a couple of lookout points. One was over the bay looking toward the town and the ship at anchor. On the other side of the island we stopped at another lookout that came complete with a very chatty light yellow bird (a cuckoo I think). Our final stop was at a beach that had been advertised in the tour literature as having “black lava sand” which is not my favorite but I wore my swimsuit anyway figuring that hey I’ve never swum in the South Pacific. Well, let me just say, I have still not swum in the South Pacific. This beach was covered with coconut debris and the sand was so fine that the surf looked dirty. Definitely not inviting. 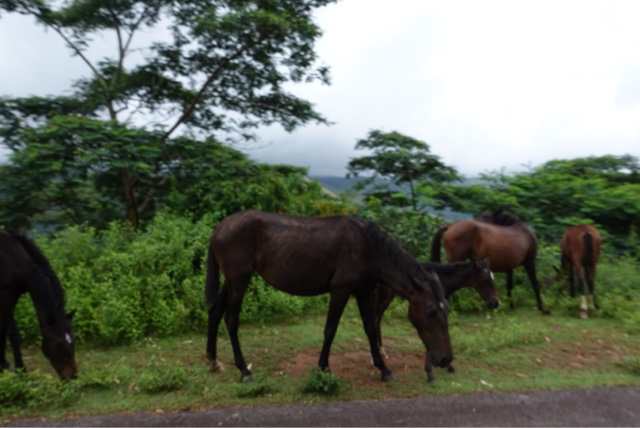 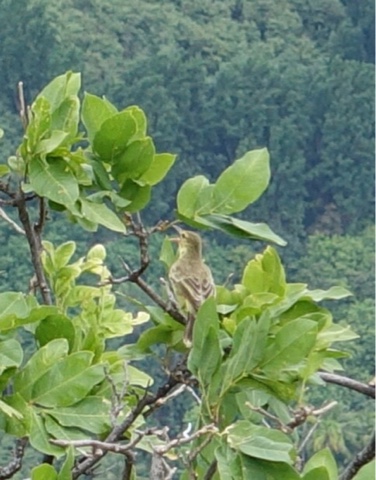 This little guy was quite talkative 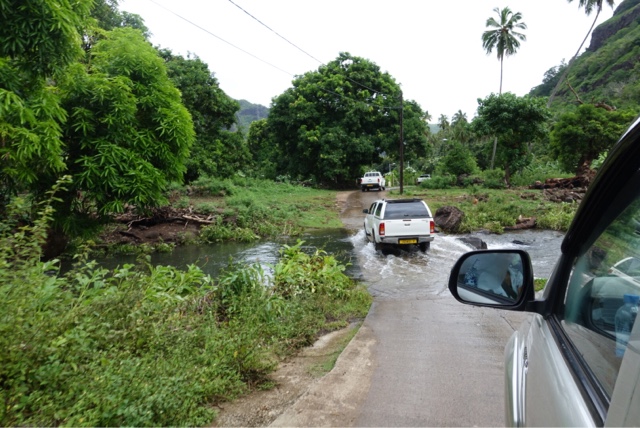 We crossed several streams like so -- about as adventuresome as we get!
Once again I seem to be describing to you a less than desirable place but honestly it was interesting and well worth visiting. The scenery with its soaring hills, rocky cliffs, lush vegetation and views of the surrounding ocean was well worth the price of admission. I would have perhaps liked to interact with the people a little more and learn more about their culture. Of course we have had opportunities on the ship to learn more about the islands that we will be visiting but for the most part R and I have refrained from doing so being pre-occupied with our needlepoint and my exercise routine. Only so many hours in the day. (I didn’t really just say that did I? I mean here we are on this ship with nothing to do and all day to do it and I am telling you that there are only so many hours in the day. Go ahead just smack me right now.) 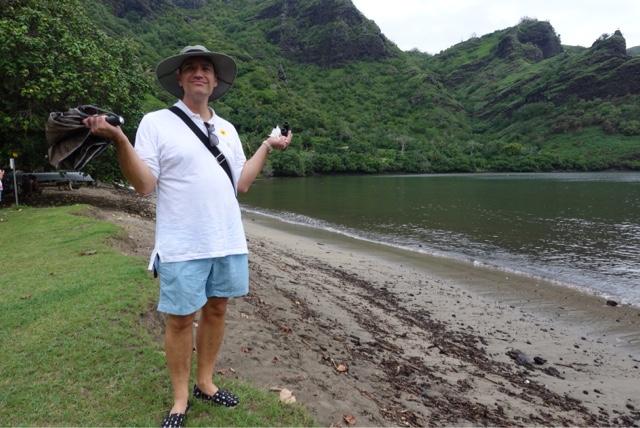 No swim for me! 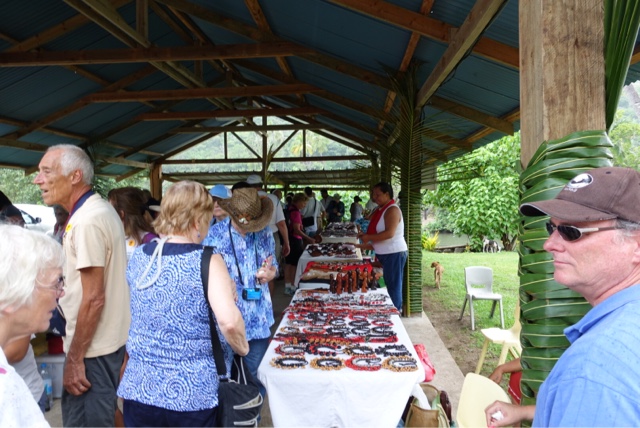 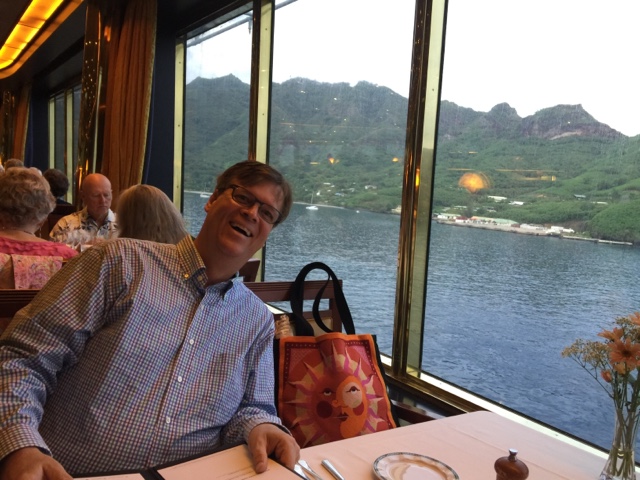 Posted by Russell and Stephen at 9:31 AM