Another mostly uneventful day. We once again participated in the knitters and needleworkers get-together at ten am and I am happy to report that we were able to do more mixing and socializing than we did yesterday. Barbara (remember her? She’s the talkative one who does crochet)  has apparently hijacked the group at the other end of the room and she is insisting that everyone use the “free” yarn (mostly junk) to knit or crochet baby blankets for “Project Linus” (they go to infants in the hospital). Those individuals who have a different desire, say like to knit something for themselves or a loved one fled from her and joined our group where we make no pretense to be doing  charitable work nor do we in any way condone the use of free thread/yarn (the other members of the group may not be as committed to this later point as Russell and I are;) 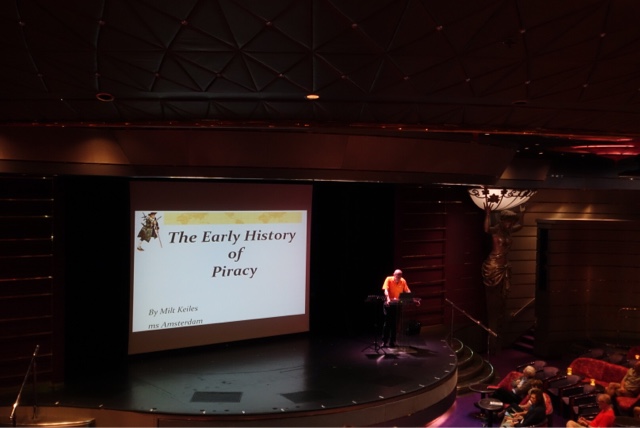 Talk on Early History of Piracy
In the late morning we attended an interesting talk on plate tectonics. The speaker was knowledgeable on the subject and I definitely learned a few things. The afternoon lecture on early piracy was however pretty sad. The speaker had obviously not run through his slides with the equipment on hand because he seemed surprised when several of the slides were unreadable by the audience. Not good. Also, he had a heavy New York accent which I am okay with except when it comes to a pseudo-scholarly presentations where frankly it’s out of place and doesn’t fill me with a great deal of confidence in the messenger. 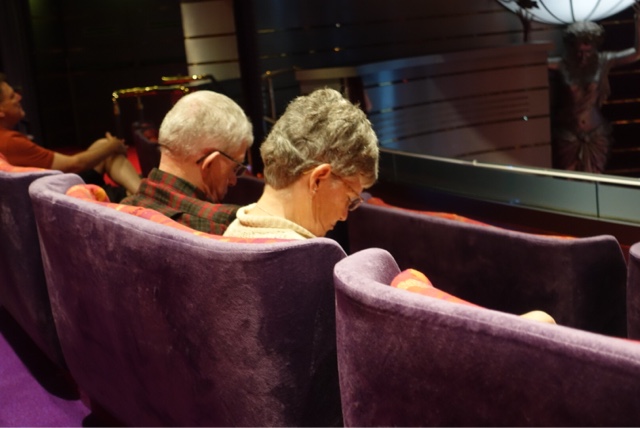 Fellow attendees at early piracy talk
Russell went to a second lecture in the Culinary Arts Center while I went to work out. Same situation today as yesterday, that is plenty of treadmills and elliptical machines available while the rowing machine was occupied. Strange. Anyhow, Russell said the talk he attended on the emergence of the chef was good. 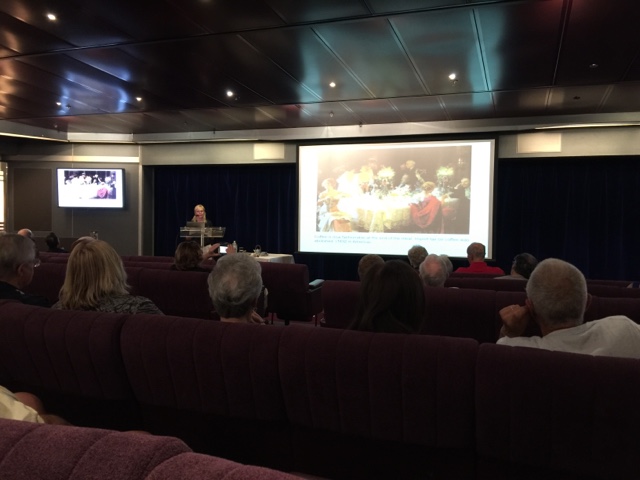 History of the Chef talk
Dinner tonight was a formal affair. Before getting all dressed up, I was able to sit on our verandah and read Middlemarch. I am getting close to the end of the book now. I’ve enjoyed reading it. She’s a remarkable writer and really good at characterization and plotting. Still, her language can be dense and the pace a bit slow. I’ll be happy when I am done because I read the first four hundred pages a year ago, put the book down and then went back to it a month or so ago and re-read the first four hundred pages. Sitting on the verandah and watching the setting sun’s rays reflected on the low, wispy clouds whilst hearing the waves and feeling the warm, gentle breeze was a peak experience for me (even if I did fall asleep for a little while). 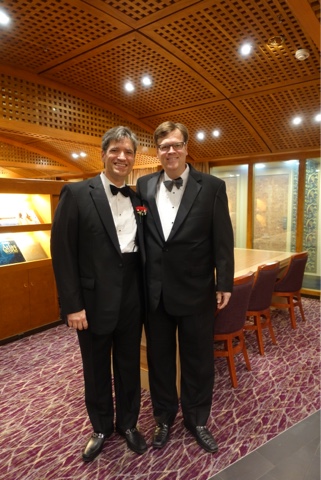 Back to dinner -- it was a formal night as I mentioned and Russell and I brought our tuxedos and actually wore them. I say “actually wore them” because they have been in our closet for a couple of years and we’ve been too heavy to be able to wear them even if we had cause to (which I’m pretty sure we did not). Anyhow, it was a bit of a personal triumph for us to be able to put them on and have them fit so well. Our meal, which we ordered from the special vegan/vegetarian menu, was mostly very good. 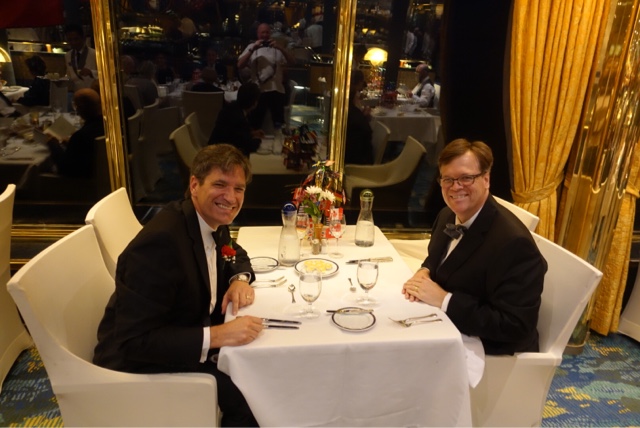 Selecting what we want to eat is a complicated business. They give us this special vegan/vegetarian menu the night before (it’s the same menu every day) and we are supposed to tell them what we want to eat the next night. Well, aside from the fact that I don’t necessarily know what I will want to eat tomorrow today, I also am supposed to make the decision without benefit of knowing what the “regular” menu is going to be (it changes every day). On the regular menu there are always vegetarian options which if they are not vegan can sometimes be made so. Needless to say, it’s hard to commit to the items on the special menu when something on the regular menu may appeal to you more. I think that we’ve struck a good compromise now though whereby we don’t have to make our dinner selection the night before but rather by noon on the day of. This way, I am hoping, we will be able to see the regular menu before making a selection from the special menu. The special menu is not that big so I am hesitant to overdo the special menu meals early in the trip. We’ve got one hundred or so more days of this. We’ve got to pace ourselves. Ah the challenges we face – bravely and resolutely.
After dinner we decided to skip the xylophonist/comedian (I kid you not) who was performing tonight and went back to the room where we sat and needlepointed and watched a “classic” (according to Russell) movie called Tommy Boy. In the words of David Foster Wallace, it was "a supposedly funny thing that I'll never do again”.
Posted by Russell and Stephen at 8:58 PM