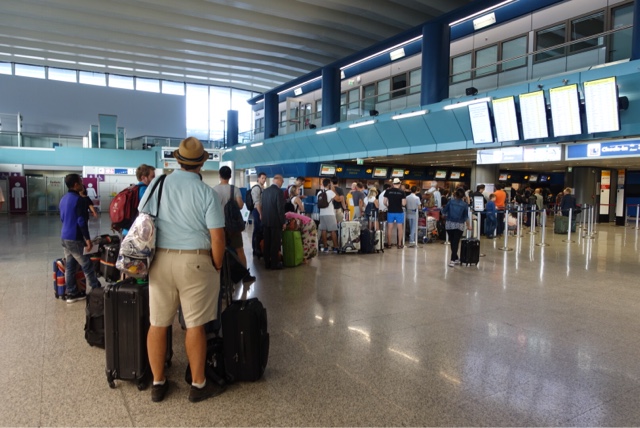 Its a confusing setup so it takes us awhile to find Swiss Air counter (hint: its the one with the long line!). We get in the "drop off luggage only" line because we've already checked in online. This line is shorter than the other plain check in line but seems to be moving more slowly. 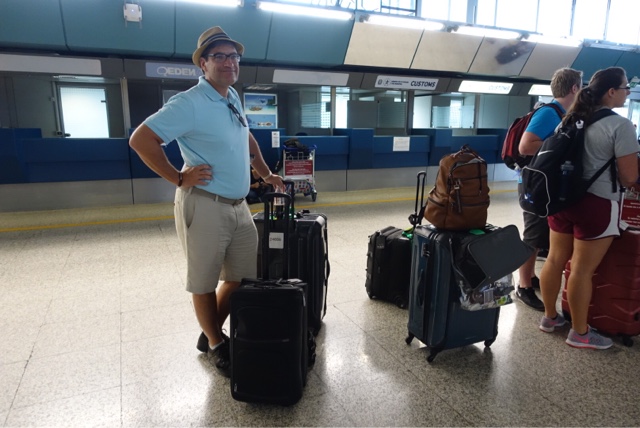 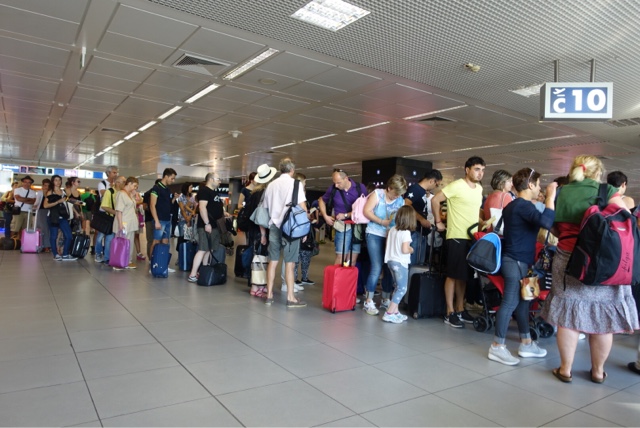 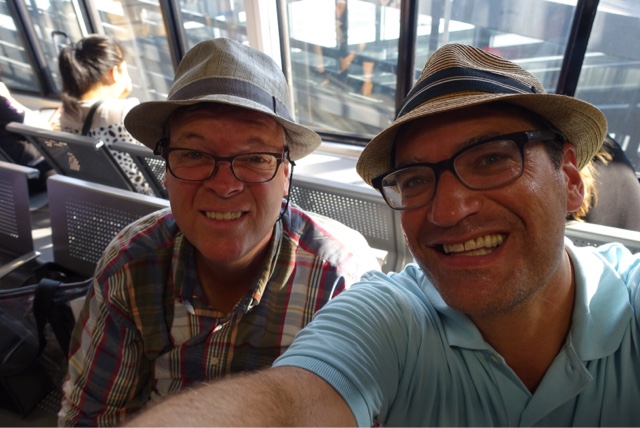 A little bedraggled
And then it happens. Two Italian seventy year olds are trying to cut into our line although why I am not sure. Two American couples ahead of us have already told them they need to go to the back of the line but they are pretending that they don't understand. That's when Russell gets involved: "Look ladies get to the back of the line" he says in maybe a slightly louder and more authoritative voice than usual. Suddenly the one lady says in perfectly good English: "We are Italian. You are American. You need to go back to America." Well, mercifully either Russell didn't hear what they said or he choose not to respond because the next thing I know one of the two of them is sulking all the way to the back of the line while the other one pretends like she is investigating something over here before she too slinks to the back of the line. And guess whose flight they were on? You guessed it: ours. And wouldn't you know they made another scene at the check in gate and also, and this is the real kicker, while deplaneing. How do you make a scene deplaneing? 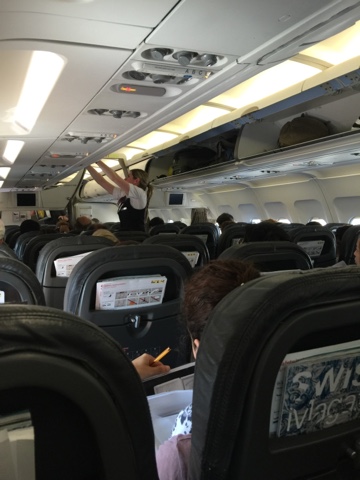 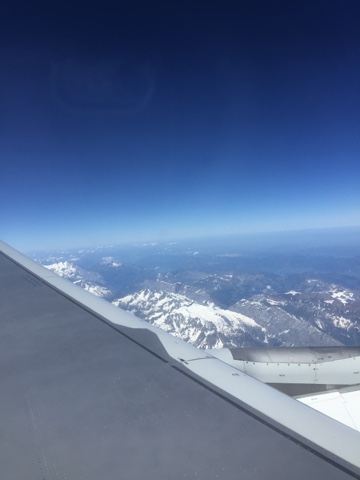 Alps from my seat
The good part of the story is that we ended up checking our three bags (we were only allowed one each) and two of them were grossly overweight but we didn't have to pay any extra. Now we shall see whether they actually make it here or not. They had special green tags which means that they are automatically transferred from the airport to the rail service and supposedly will arrive here tomorrow after 4:00 pm. Maybe they will collect the extra fee then? Who knows. I just hope they show up. 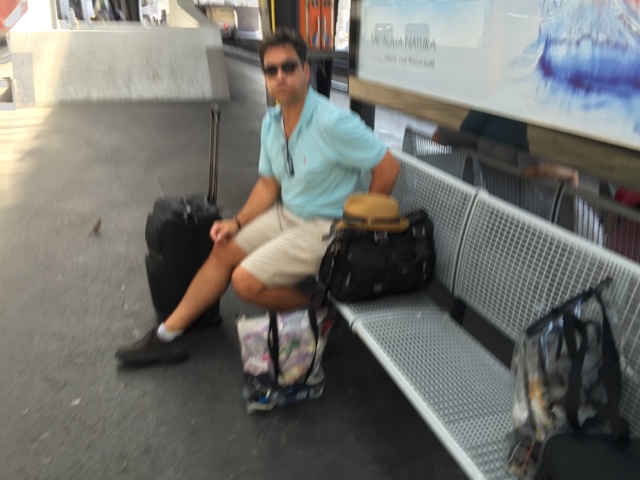 Train number two
We got lucky with the security check point as well. We got through with numerous liquids in our bags and also two CPAP machines (neither of which did we have to demonstrate) a computer (also didn't have to demonstrate) plus I had a power strip and all sorts of cords and chargers that I thought for sure would get me flagged. Nope -- right on through. 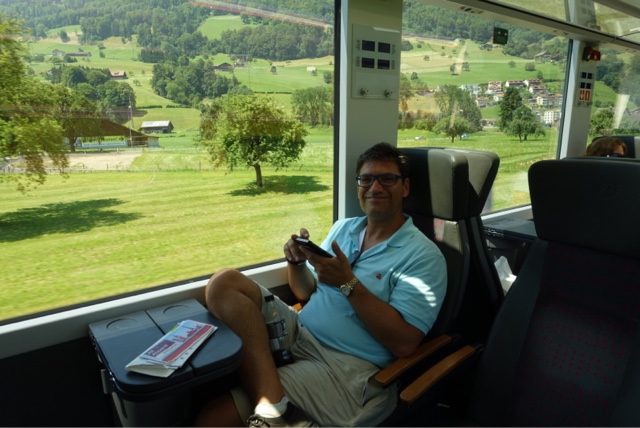 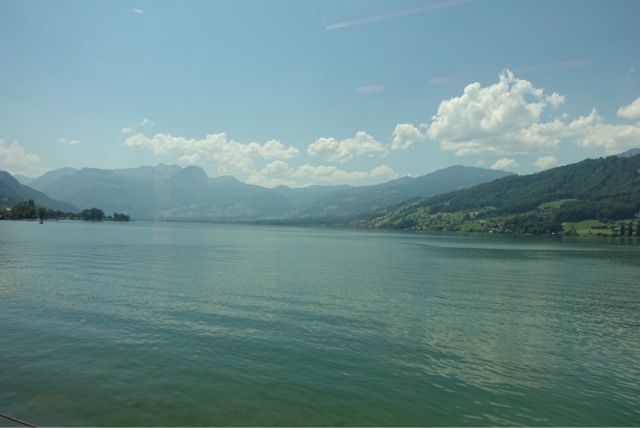 From the train
So now we are at the gate and they are still boarding a plane for Corfu and must have called "final boarding" a dozen times and each time more people would show up. And the boarding just went on and on and I thought there is no way this plane is going to get out of here in time for our plane to board and leave on time. So then they announce that our plane has a new gate. Mad dash to the new gate. Get in line but it's an Italian line. Where does it start? Who knows. Who is in front of whom? Its just chaos and why are we waiting in line now anyway? There is no plane apparent. Turns out we have to take a shuttle to the gate and now Russell and I have to figure out some way to casually get by the flight attendant who is checking boarding passes with our six bags including one wheel aboard that is positively stuffed to the gills and probably won't fit into the overhead compartment at all. Russell decides to kill her with kindness while I have to make a last minute detour out of the rule enforcer's line and into the other person's line who looks like she might be a little bit kinder. She lets us go by but gives us a wary look. One more hurdle down. 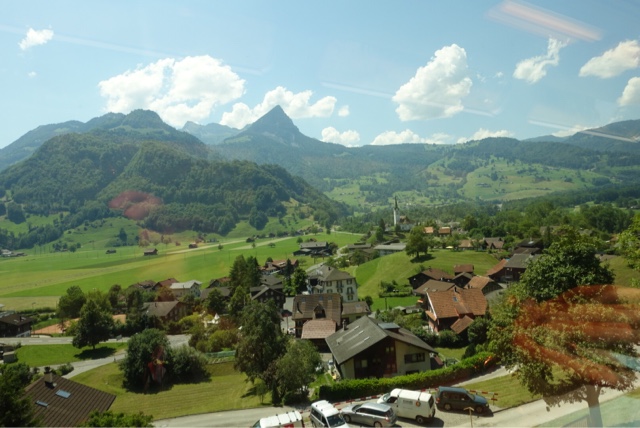 From the train
Now all we have to do is get on the plane and get all the stuff into the overhead bin in front of the skeptical but mildly amused flight attendant and BINGO -- we've made it! What a relief! I cannot believe we got through security relatively intact and that we were able to bring our six pieces of carry on luggage aboard. Amazing. 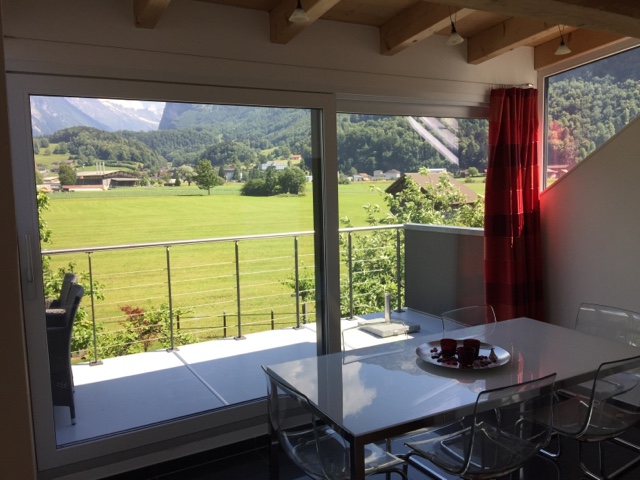 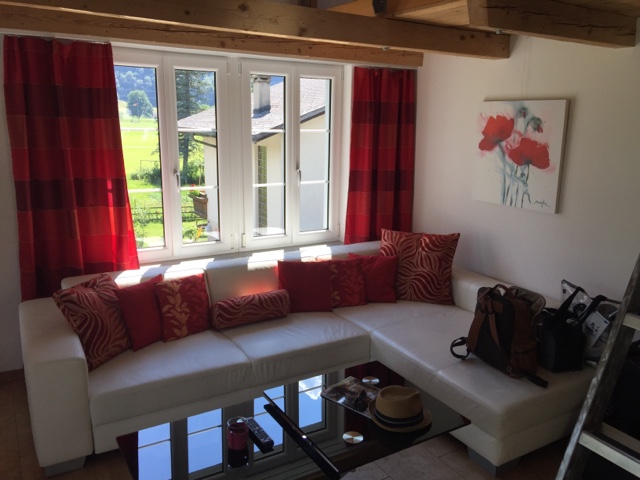 The apartment
So, the plane is delayed because the luggage is taking a long time to be loaded. No comment. But it turns out we are in the emergency aisle so score! Actual leg room. The flight attendant insists that I open my shade during take off and landing. I have been trying to work out the logic of that request for the whole day. I mean the captain isn't using these windows to steer the plane, is he? There is no need to check for obstructions to the right or left of the plane, is there? Well, I comply -- of course -- but it still has me stumped. 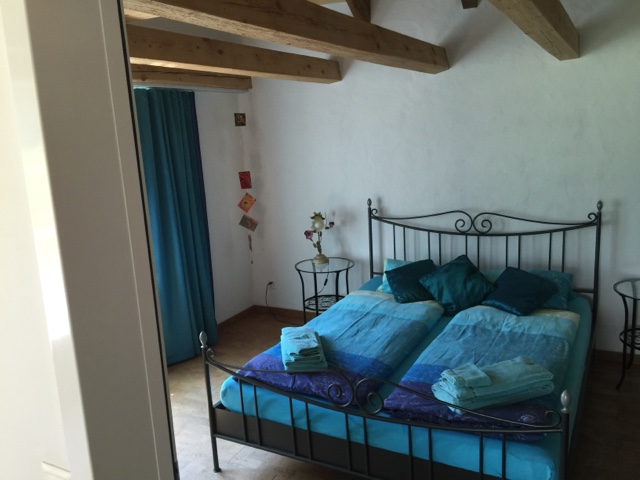 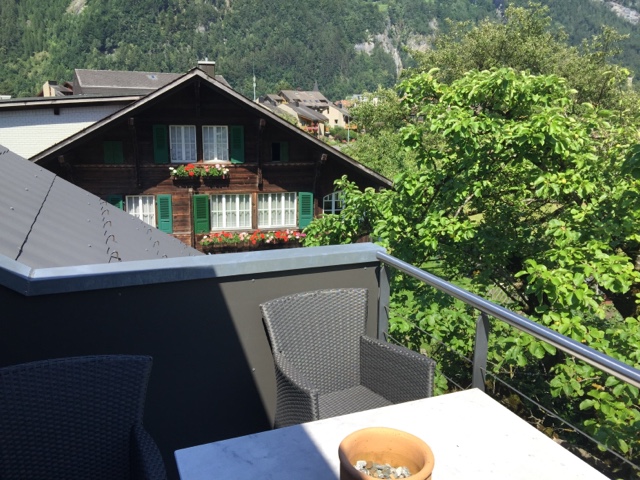 Cute house next door
In Zurich we arrive and we've been instructed to follow the baggage claim signs to the train signs and finally to the train service center sign. We go for a long way following the baggage claim signs until we get to ... baggage claim. Where are the train signs? I don't see them but then finally I spot one but it says Train/Tram so is this taking me to the right place? Who knows but we follow the sign and we follow another sign and finally we see the railroad service station which is where our tour company is supposed to meet us but ... no tour company. 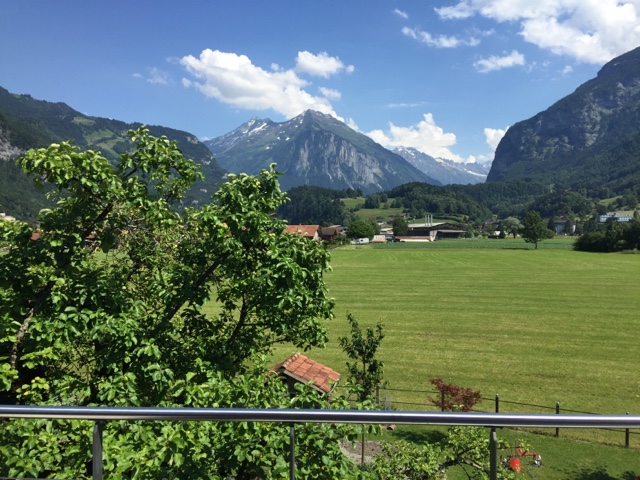 View from balcony this afternoon
We know we have to get our Eurail Passes stamped and I assume that is the reason we are here at the railroad service center. We get the passes stamped and she tells us what track we need to be on and we go there and wait. Well we don't have to wait too long before the train arrives. It's early but I figure that it will be sitting at the station until the departure time so we get on board and make ourselves comfortable and before you know it the train is pulling out of the station. Early. Way early. Uh oh. Could we be? Do you think? Is there a conductor? Somebody, anybody who speaks English? 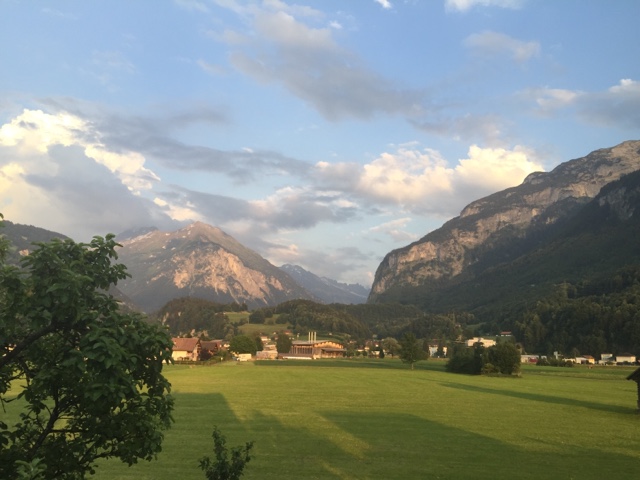 View from balcony early evening
Yes it turns out we are indeed on the wrong train but not to worry a woman who speaks English and is also quite proficient with the train web site tells us we can get off at the next station and wait there for the the train we wanted to be on in the first place to stop and then we can get on it which is what we did. Finally we are on the right train but then ... there is this whole issue of a switch in trains that we need to do in Lucern. Ugh. More anxiety. More sprinting. More questions to anyone who will listen. Is this the train to Meiringen? Does it stop at Meiringen? Are you sure? Okay, good. We are all set, at last. We will get to Meiringen and the tour company will ... not be there. What now? Well I try one phone number I have and immediately I get some message in German I don't understand. So I try the second number and amazingly I get our "host" on the phone and she says that she will be right over to pick us up and she is. In a very tiny car. With a very large dog in it. Okay, how is this going to work? Well somehow it does and we get to the apartment and ... it is lovely, really lovely. Bright and open and airy and all the things that the last apartment was not. We have a gorgeous view of snow covered alps and of a waterfall (which we can hear too) and of a brown clapboard house with dark green shutters, lace curtains and red geraniums like something right out of a tourist brochure. 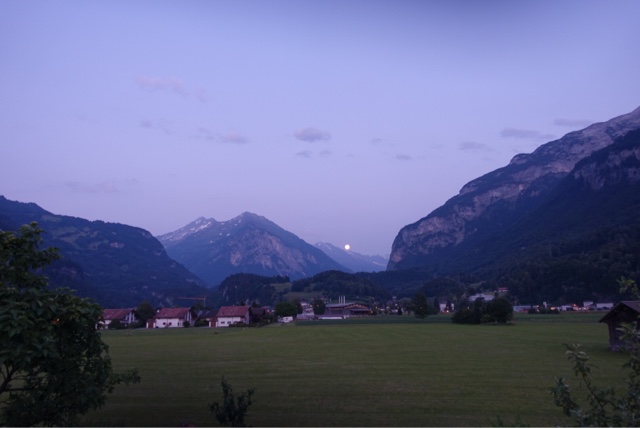 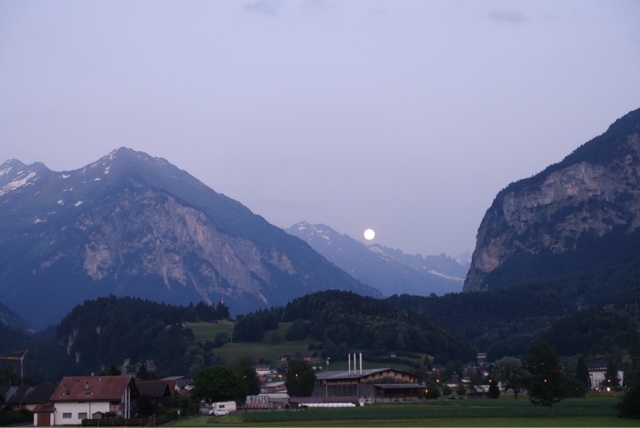 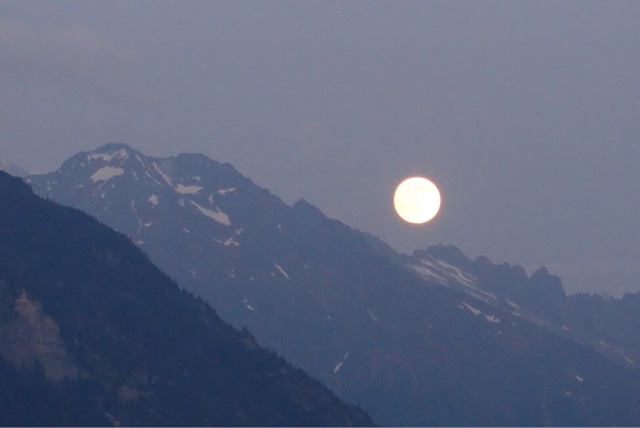 Full moon tonight from our balcony
The hostess shows us a few things and at last we can rest and decompress. We've made it. Thank gawd awmighty we made it. Later we go out to the grocery store and buy about a bizilluon pounds worth of groceries that need to be hauled back to the apartment. R makes pasta with tomato and basil sauce for dinner. I guess we haven't left Rome completely yet.
PS -- After grocery shopping, R decides to make himself a cranberry spritzer. He picked up cranberry (and apple) juice at the grocery store. But, before he goes to make the drink, he figures he better taste the cranberry juice to make sure its not one of those super-strong cranberry juices. And wham-o! Its not cranberry juice at all, its red wine vinegar! And a lot of it too. Oh, and as for that apple juice? Apple cider vinegar!
Posted by Russell at 2:11 PM