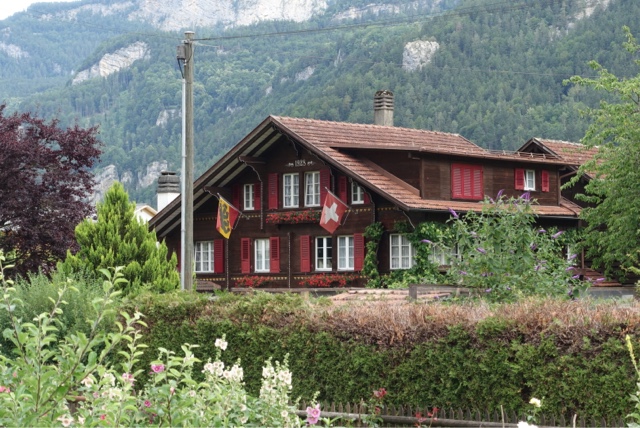 One of the houses in our neighborhood
Trying to step up the pace of activity here in Switzerland as we are now in week two and I haven't really felt like we've seen a lot. I do try to stay away from the "need to see everything" attitude. I find a.) that it is not possible and b.) that it does not contribute to my enjoyment of traveling. I do sometimes feel that I may take the "let's take it easy" approach a little too far though. After all I did not come all this way just to needlepoint. I want to see stuff too. Of course the heat last week definitely put a damper on my energy (and enthusiasm) level. Today (and yesterday) have been great with temps in the low seventies. It's supposed to get warmer but nothing above 84 degrees so let's hope weather.com is correct. 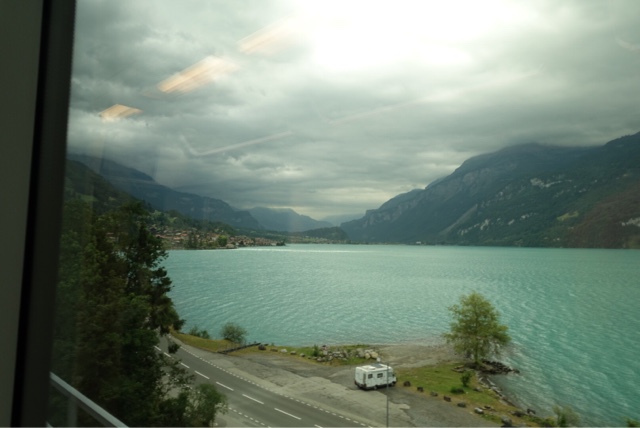 Lake Brienz from the train on our way to Interlaken 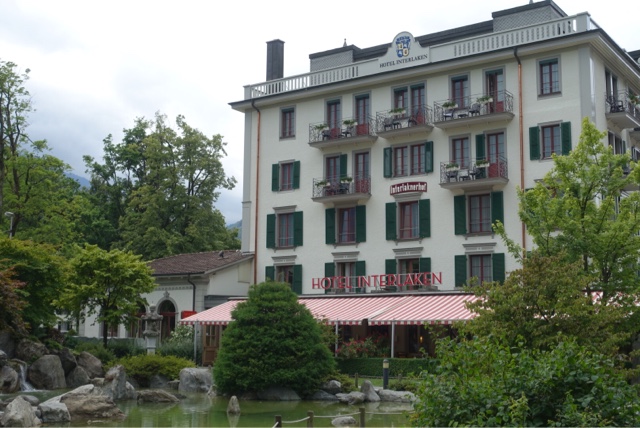 Interlaken
Today we explored Luzern and yesterday it was Interlaken. Interlaken was nicer than I had expected. I think that's mostly because my expectations were pretty low. I had heard it was nothing more than a touristy town and indeed that is an apt description. However, as touristy towns go, it's not a bad one. We saw a beautiful hand carved crèche that was too expensive even for me and Russell. Hard to believe I know because Russell and I can be both stupidly extravagant and thoughtlessly impulsive sometimes (a particularly lethal combination!) Also we stopped at a chocolate shop to buy some schoggi (think thinly spread chocolate with various additions like nuts, raisins, etc.). Russell decided that fifty-six dollars for a "schoggi sampler" was more than he wanted to spend. So much for shopping in Interlaken. Still we had a fine time. 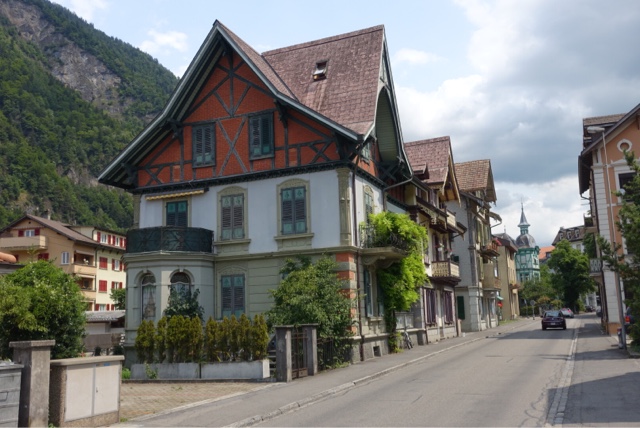 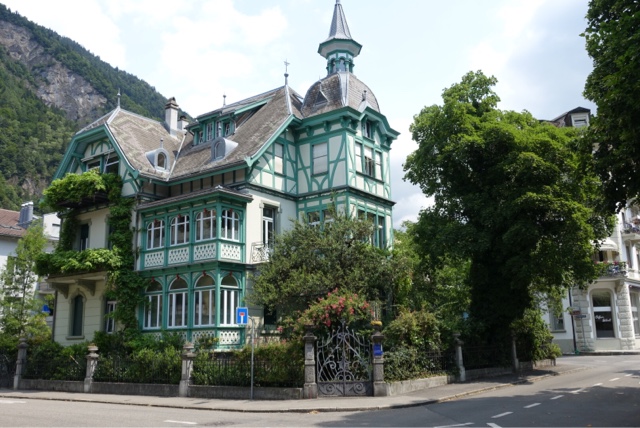 Adorable
Today in Luzern we followed Rick Steves' walking tour and I was gratified to hear from Russell that he had not seen a lot of what I (and Rick) showed him this time. So that was good. And, I was happy to see the famous bridge and water tower. That is one of those iconic European images that I've always had on my "want-to-see" list. Now I can check that one off. Actually I did not realize it but there are two of those wooden bridges and the second, less well-known one is "original" whereas the Chapel Bridge (the more famous one) burned down and was reconstructed in the early nineties. Of course how much original wood can there be on a several centuries old wooden structure? 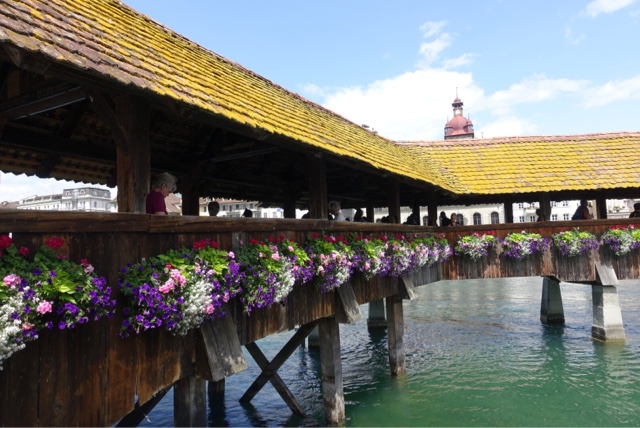 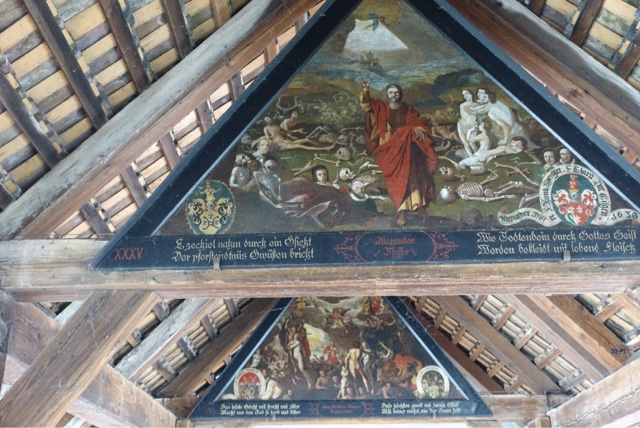 Paintings in eaves of bridge roof
We also saw something very unique which I guess was a thing in the nineteenth century. It's called a "panorama" and it's a giant painting in the round depicting a famous scene. In this case the famous scene was the surrender of the Bourbaki Army (87,000 of the French forces named after General Bourbaki) at the conclusion to the Franco-Prussian War. Without going into the details the surrender involved Switzerland and the painting has been hanging in Luzern for almost one hundred and thirty years. Apparently these three dimensional dioramas-cum-paintings were quite popular in the era before television (and video games). It was interesting to see and one of those old-timey tourist things that are always getting harder and harder to find. 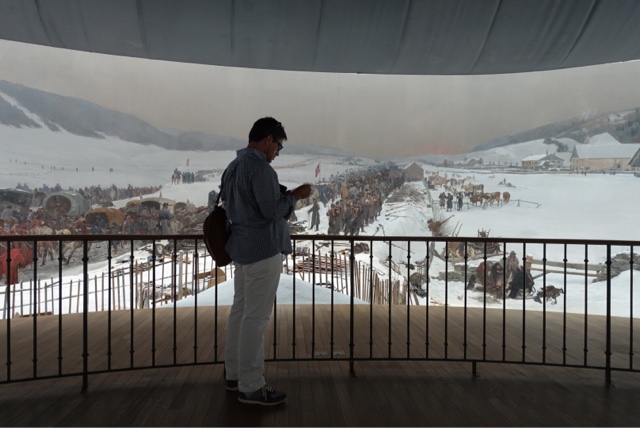 Fatty McFatty in front of the Bourbaki Panorama (actually I felt pretty good today and thought I looked alright in those jeans even though they were a little tight in the ass area thus requiring the shirt-tails-out look which is a little on the young side for me but I think I can still get away with it at least in Europe where I don't know anyone!)
Speaking of "off the beaten track" sights this one was off my radar though apparently not off other people's. It was a monument to Swiss Army victims of the French Revolution (yes, apparently there were some) and it took the form of a recumbent lion shot with a spear and carved out of a stone wall. I wasn't sure where it was located but when I saw a horde of Japanese tourists headed in our direction I knew we were getting close. Strictly as an aside, may I say that there are a lot of Asians (specifically Japanese) here in Switzerland. Definitely way more than in Rome or any of the other places we've visited. The Swiss Tourism Board must do a swift business in Tokyo. 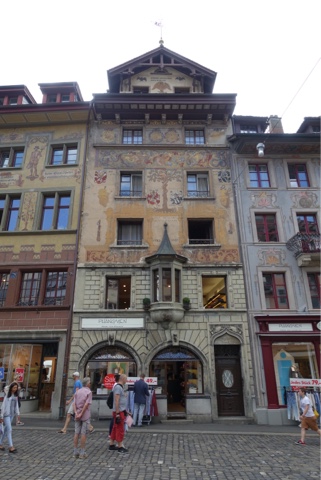 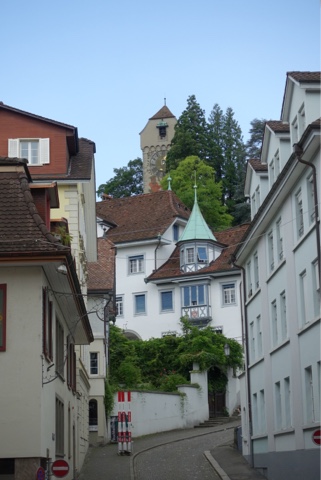 Random Luzern shots
At any rate, the lion is well done and worth seeing though don't plan on being the only ones there when you visit! 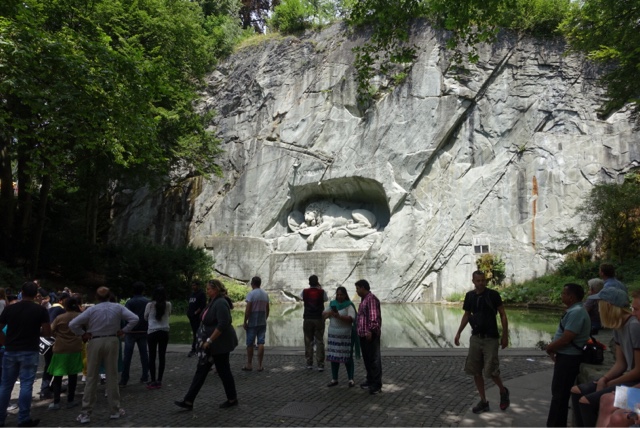 Almost forgot to include pic of the lion. Now you've seen it too so you can cross that one off your list!
Posted by Russell at 8:30 AM