Today we visited Terezin. It was a Nazi concentration camp located about an hour's drive north of Prague. People were interned there from all over Central Europe. Of course, the largest number of prisoners were Jewish people from Prague including, as it turns out, the grandmother of our tour guide, Tereza. So, it was an extra special tour because Tereza is both very knowledgeable about the camp and, of course, very passionate about telling its story. 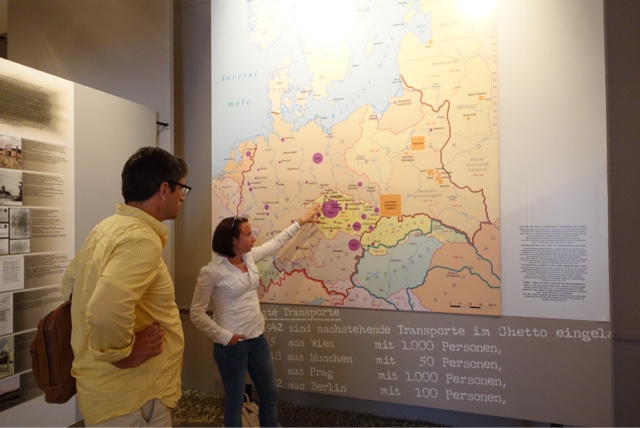 Our guide, grand daughter of Terezin survivor explaining to us where prisoners at Terezin came from 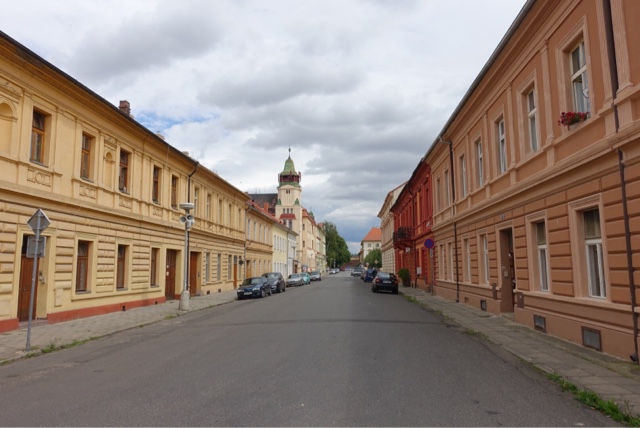 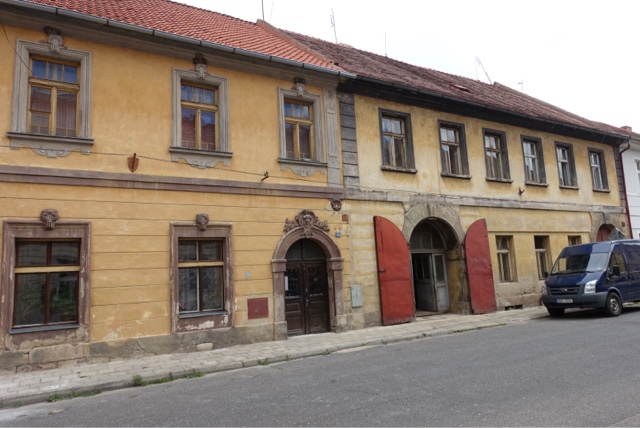 Terezin buildings
Several facts set Terezin apart from the other camps established by the Nazis. For one thing, the camp was originally built as a military base to protect this part of Czechoslovakia from the Germans. It consists of a town set within the walls of a star-shaped fortress. It was chosen to become a detention center because it was both easy to control and it could house a lot of people in the military barracks. Another thing that set Terezin apart was the fact that, to some degree, it was used as a "model" camp to show the world (and the Red Cross) that conditions for Jews and other prisoners were not as dire as people were beginning to suspect. The Nazis filmed prisoners here playing soccer and seemingly enjoying themselves.
There was a very active cultural scene at Terezin from visual art to music and theater. Also, some of the prisoners published a literary magazine. It was quite remarkable to see the art that was produced and to learn of the theater and musical programs performed. Of course the majority of these talented individuals did not survive the "Final Solution". 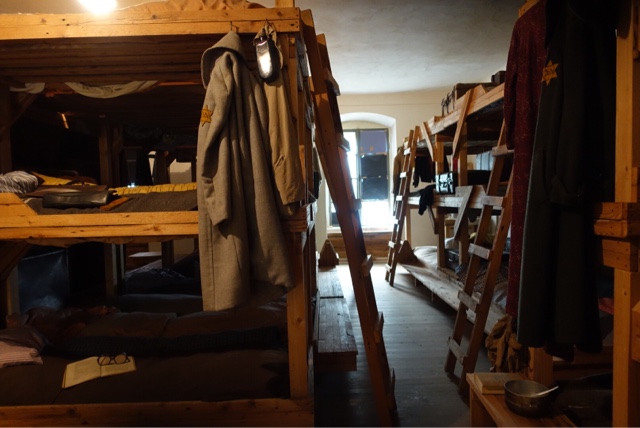 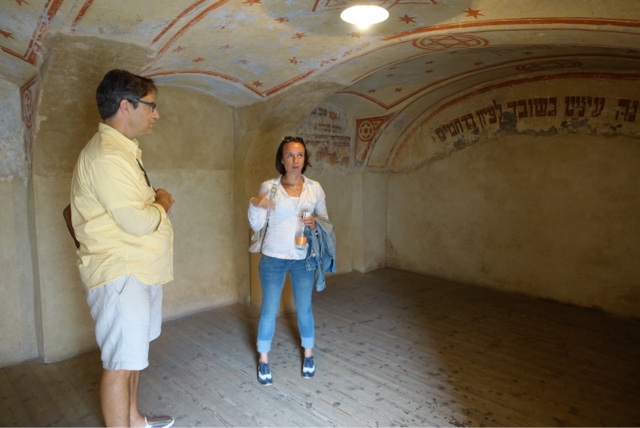 "Secret" prayer space
I was especially moved by the graffiti etched into one of the gates by prisoners and also by the recreated living quarters. I was also touched by seeing the crematorium and mass grave sites. Even though there were no extermination facilities at Terezin the Nazis still had to dispose of up to 150 bodies a day -- people that died of "natural causes" (that's enough corpses to keep four incinerators going 24/7). It was an emotional experience. 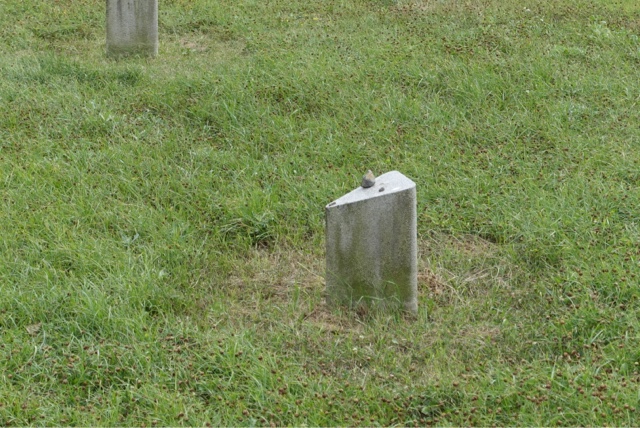 Mass grave memorial
Yesterday we went with Tereza to see the New Town section of Prague. In this case the term "new" is relative because I believe it was still established in the 14th century. We started at the Charles Bridge and moved on to wonderful views of the river. Later, in no particular order, we saw a tiny Romanesque-style church followed by a memorial to Jan Hus, a memorial to the Velvet Revolution, Wenceslas Square,  a WW II memorial, ending with lunch at Cafe Louvre. We even managed to get my sunglasses repaired (again) and on a Sunday to boot. Miraculous. 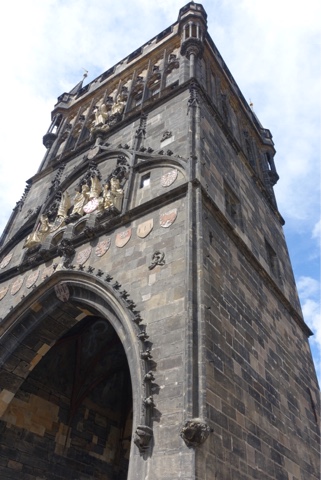 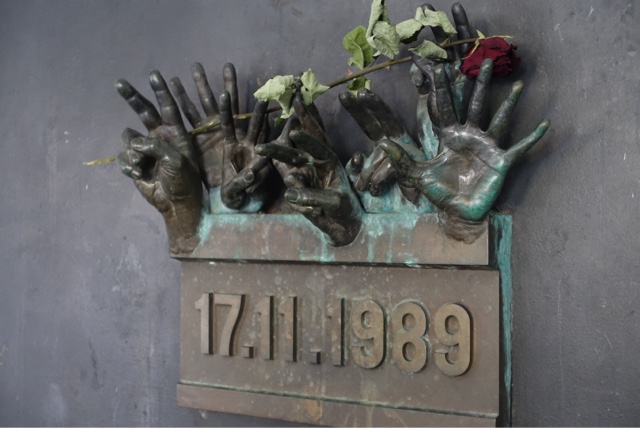 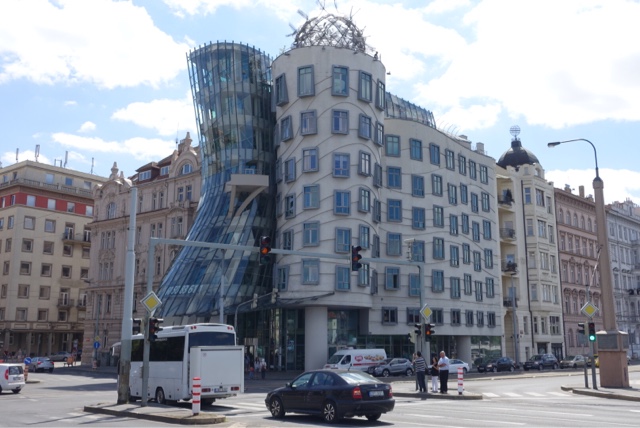 "Fred and Ginger" building, designed by Frank Gehry
On a similarly miraculous note, the weather has suddenly turned positively autumnal here with highs in the low seventies and windows-closed evenings. It has been a most welcome turn of events.
Special Apartment Feature of the Day 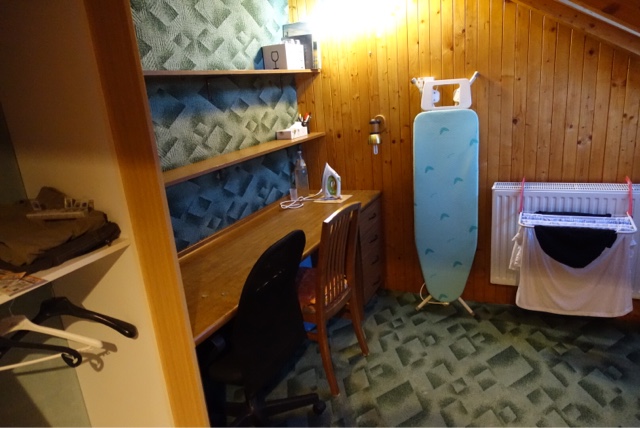 Like the carpet in the spare bedroom which we are using as a closet? That's good because it continues up the wall!
Posted by Russell at 1:06 PM