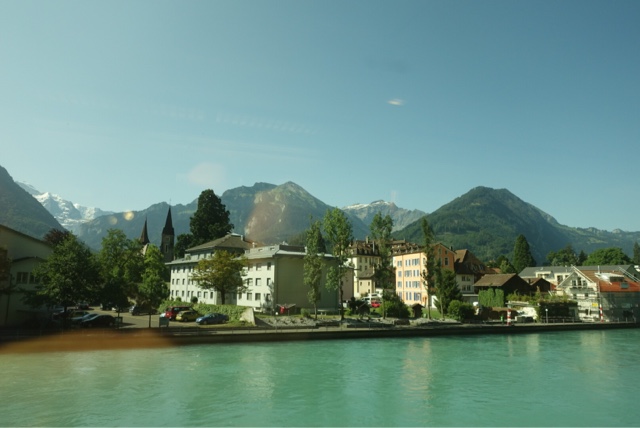 Photo from the train this morning
Up and out early this morning (haven't said that in awhile). Today's destination? Basel. Or more specifically the Vitra Design Museum and Tinguely Museum. We caught the train to Interlaken and then switched to another train that brought us to Basel. The whole trip took about two hours and thirty minutes. Not too bad and the trains are very comfortable and smooth. We bought first class train passes even though it is not really necessary as the second class cars are very similar and totally fine, it's just that the first class coaches are less crowded and therefore quieter (usually -- more about that later). 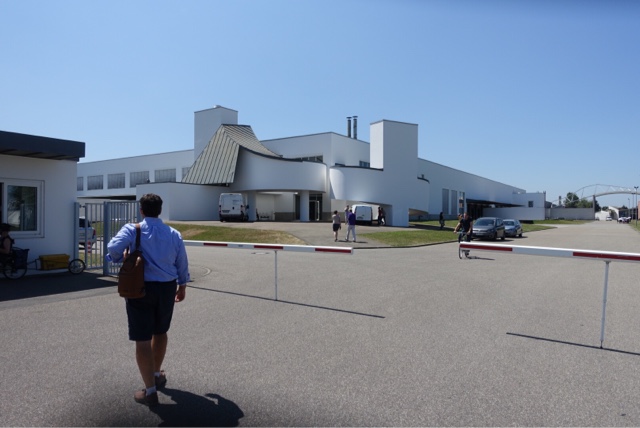 Arriving at Vitra Design Museum
We took a cab from the train station to the Vitra "Campus" which is located in Germany but only about twenty minutes from the Basel (Switzerland) train station. The campus is a collection of buildings done by famous contemporary architects. Some are used for manufacturing furniture which is what this company does and some are strictly for the design museum. It was confusing at first, trying to get the lay of the land. The first thing we did was visit the museum space. They had a special exhibit on contemporary design in Africa. At first I thought, "What do I care about that?". But actually it was quite interesting and thought provoking. Then we walked around the campus and saw buildings by Frank Gehry, Zaha Hadid and Tadeo Ando among others. We did not have time to take a guided tour (they take two hours and we told the driver we would be there for only ninety minutes). Still we had plenty of time for the gift shop (yeah!) and the furniture showroom. 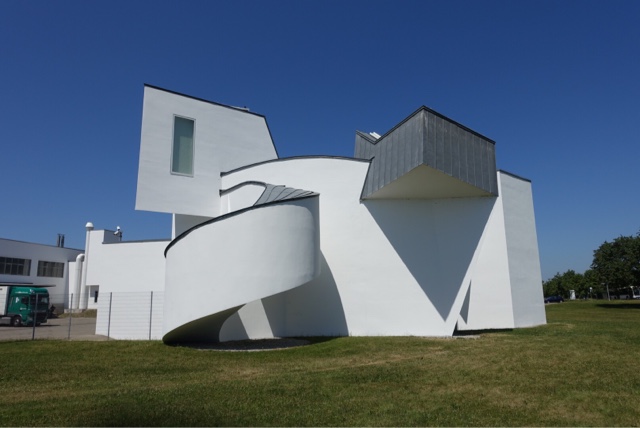 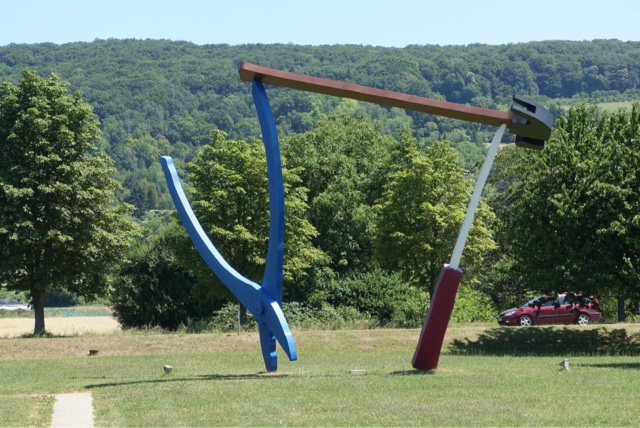 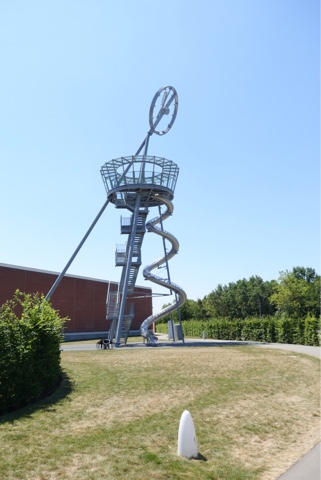 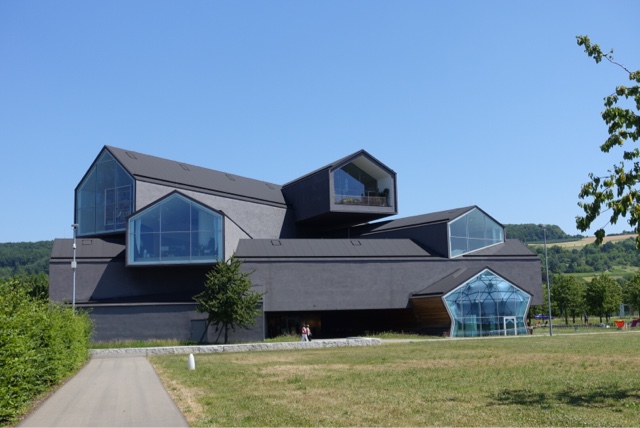 Store and cafe and showroom building
Our taxi driver then took us to the Jean Tinguely Museum. Tinguely (pronounced Don't-Ask-Me) specialized in kinetic sculpture which is something Russell has very much enjoyed in the past. Kinetic sculpture simply means (to me) sculpture that is designed to move. The ones that we have seen in the past have moved with natural forces such as wind, gravity, water, etc. Most of Tinguely's work however was powered by electricity. So that was kind of the first disappointment. Then, it turned out that Tinguely's style is very Rube Goldberg-ish. The sculptures are really assemblages of found objects that are made to spin, go up and down, open, make noise, you get the idea. Some of the pieces can be quite large. Others are very small. The museum itself was designed by a famous architect and is very frustrating to navigate (it seems you can never get there from here). One big problem was that most of these sculptures are not built for continual movement so after someone turns on a piece it moves for sixty seconds and then it must "rest" for ten minutes before it can move again. In order to get a real feel for any of the pieces you need to see them in motion and unfortunately we must have been following a really young group or something because nearly every sculpture that I tried to turn on was "resting". We stuck around to see some of the largest ones do their thing and they were entertaining and fun though I am not entirely certain what the message was that we were supposed to get out of any of it. 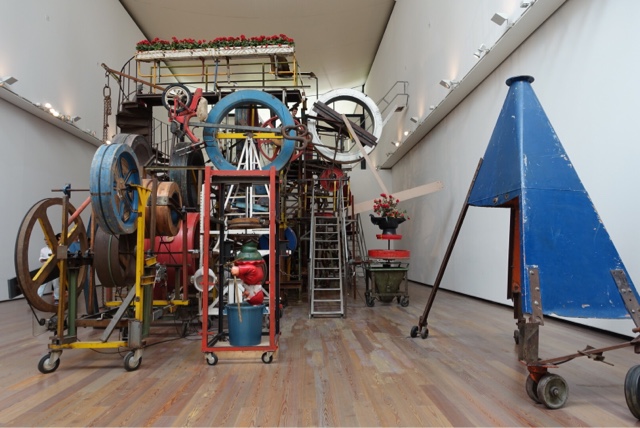 See what I mean about Rube Goldberg-ish? 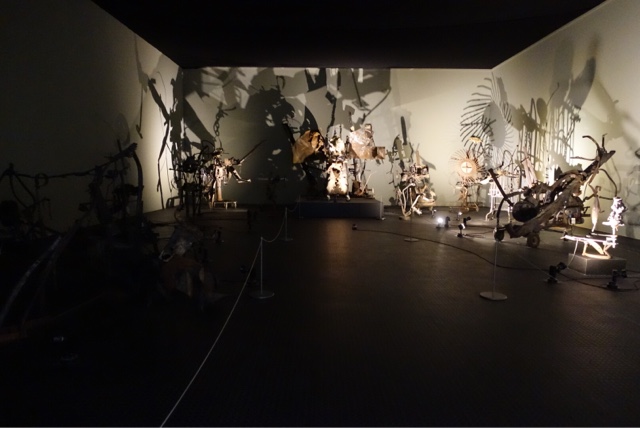 Dance of Death -- kind of cool when they all move
Speaking of the message, well things got progressively worse as we explored the work of some of the other artists being exhibited there. How about a bicycle rigged up to a pen and paper so that it "sketches" while you pedal? Or flashing strobe lights accompanied by the whoosh whoosh whoosh of helicopter blades? Maybe you would prefer neon tube lights flashing randomly accompanied by extension cords (are they part of the "work") and fluttering wing noise from a thousand birds? I don't know. You tell me. What is it supposed to mean? And why? I am reminded of something I say regularly and I am not sure where I got it from but: just because something can be done doesn't mean that it has to be done (or that it is a good idea to do). 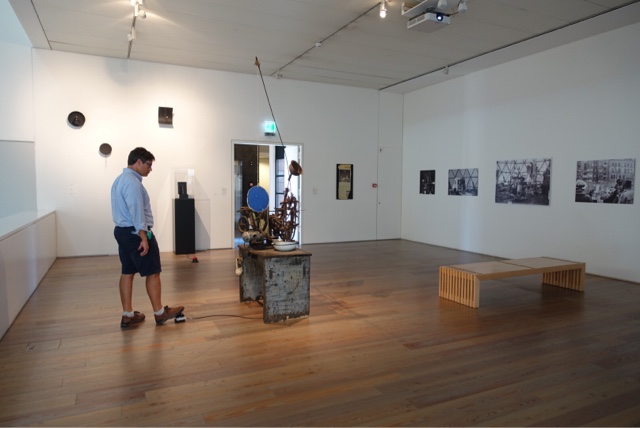 So Russell's special kinetic sculpture museum wasn't quite what we were expecting. We thought about doing some other things but decided instead to head back to Meiringen. That's when the wheels came off the bus. Or more accurately the train. Things started out fine -- no, wait, actually that's not true. We had a guy, a French guy, sitting right behind me who insisted on talking the entire time. First he was on the phone and then he was chatting with his friend and it was just annoying. No one else in the car was talking. Just him. So I was tense about whether Russell (or I) was going to confront him and then comes the announcement. Which is hard to hear over the noise of the train (and the French guy behind me). And the announcement goes on for some time in German and then it's much shorter in French and by the time they get around to English well it's brief let's just say that and here's what I heard: "Everyone has to get off the train, train is ending here". 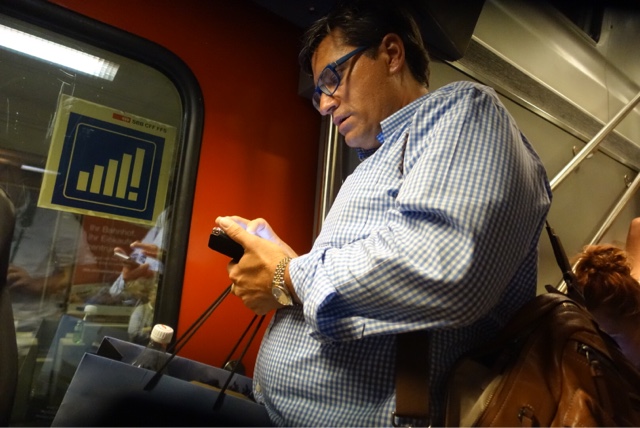 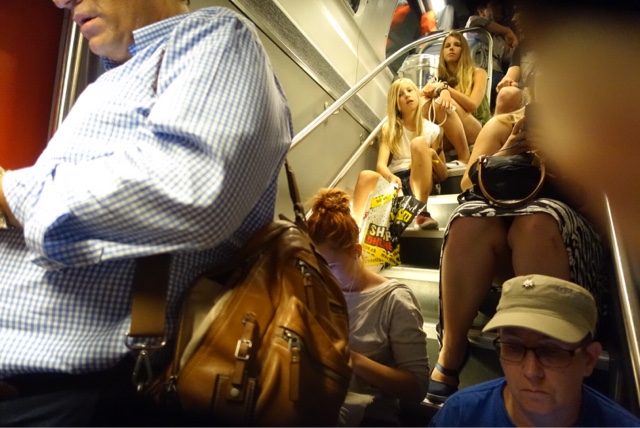 Trying to figure out what that red X inside a box on the schedule right next to our desired train is supposed to mean
So everyone starts to pack up and I say to Russell, "I think we have to get off " and he rightly has a million questions none of which I can answer and we get to the station and everyone piles off and I think "We'll just follow the crowd". But is the crowd going where we want to go? And, where exactly is the crowd going? Well, we go up the escalator and then down the stairs and we get on this train only to get off it and get on a different train and "Is this the right one?" And "How the hell do I know!". Gradually, eventually we put it together: there has been a "service interruption" (also known as a cancelled train) and we have to take this new train to Interlaken. Only problem:  this train is crowded. Very crowded. Even in first class. 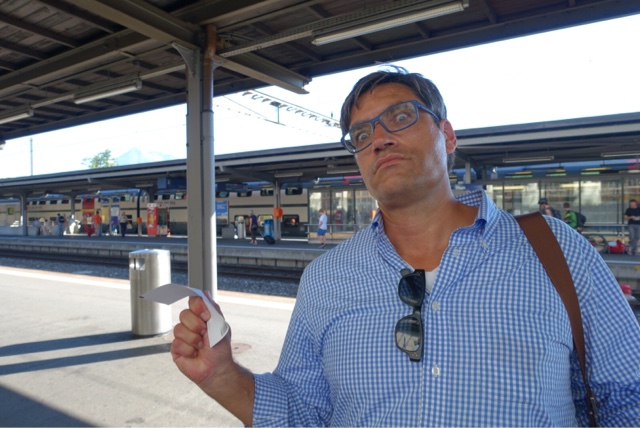 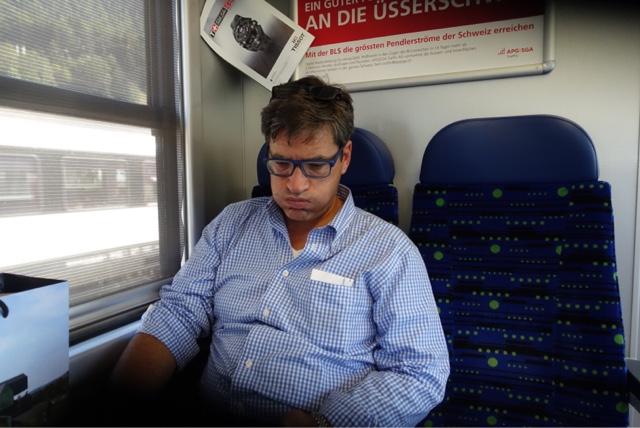 And again
So we have to stand and we are still not one hundred per cent sure what we are doing and then it happens again: another announcement. Long in German, medium in French and short in English. Something to the effect that all passengers to Interlaken must get off and switch trains in Speitz. Okay, no problem, we can handle this. Train stops. We get off. Conductor had said that transfer train would be right there but it isn't so we have to go to another track where the Interlacken train is waiting and we press the "door open" button and it flashes red and doesn't open. So we try another door, same thing. And another door and "What the hell is going on?" "Why can we not get on this train?" And then I turn and see the sign. This is the Thun station. Thun? What the hell? How did we get in Thun? This isn't Speitz? And now the Interlacken train is leaving and we are not on board and well I won't go on too much longer but suffice it to say that we had to wait for another train on another track so that we could go one station and get off in Speitz where we transferred to the Interlaken train. So rather than going from Basel to Interlaken and Interlaken to Meiringen as we had in the morning, we in the afternoon due to a "service interruption" and our own stupidity went from Basel to Bern, Bern to Thun, Thun to Speitz, Speitz to Interlaken, Interlaken to Meiringen. Unbelievable. 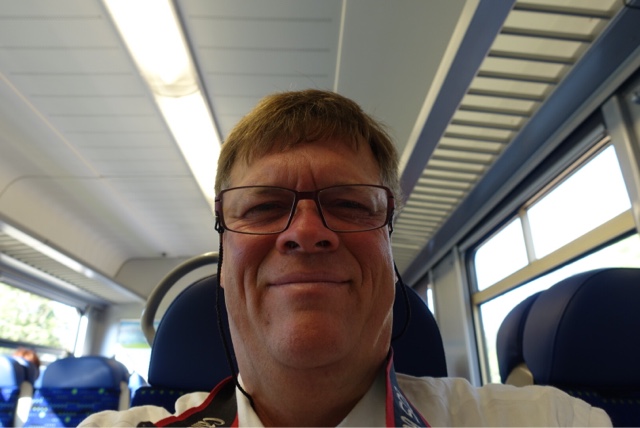 Not fair -- he gets to take whatever pictures he wants!
Needless to say we didn't get back until after seven and it took some time to decompress. And when I say "some time" I mean several pieces of schoggi and several episodes of Revenge. Sad but true. Russell has finally gotten me to watch Revenge and it is the stupidest, most ludicrous ... 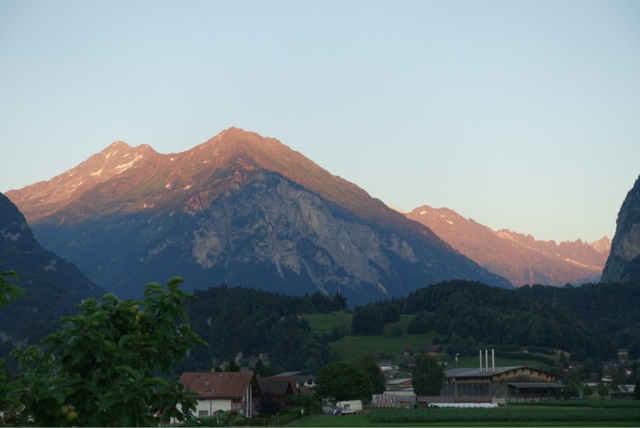