Just a quick note to let you all know that we are alive and well in Switzerland. Still having a good time although definitely sick of the hot weather (over 90 degrees every day since we got here). The heat wouldn't be so bad if the apartment was properly equipped for it but it's not (no a/c or fan). We do however have a lot of windows on all four sides so IF there is a breeze, we will usually get it. It definitely could be worse which is not to say that it's been pleasant. 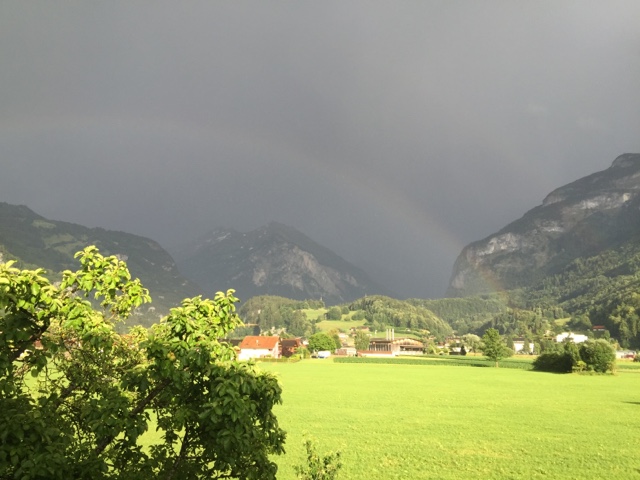 Thunderstorm we had the other evening -- it cooled things off nicely -- for awhile.
We have had several pleasant day trips though. On Sunday we took the Post Bus to Gimmelwald. Not too much in Gimmelwald except tourist-oriented shopping. We did however have an outstanding Indian lunch that came complete with an awesome view. But of course the real highlight was the actual ride itself. Gorgeous views of alpine meadows, craggy peaks, glacier runoff forming blue-green lakes and white "bridal veil" waterfalls nearly everywhere you looked. 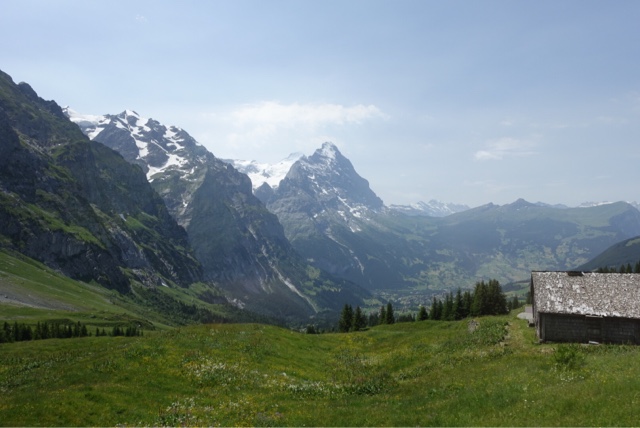 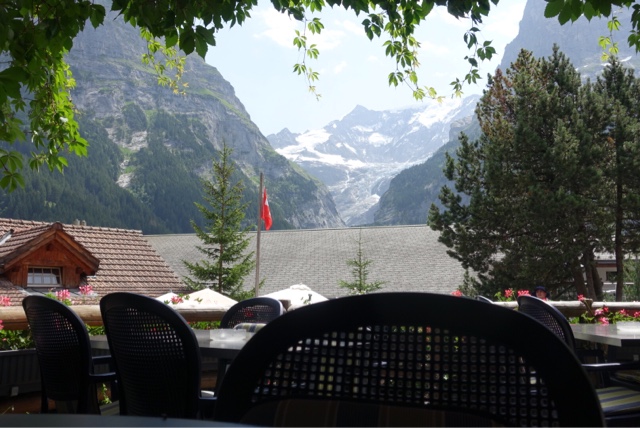 Our view from the Indian restaurant
Today we took the train to Lucerne and then spent most of the day on Lake Luzern riding aboard a paddle wheel boat. At first the boat was crowded but then as we made stop after stop and got further away from Luzern more and more people got off and eventually it was quite pleasant with relatively few passengers. The scenery changes rather dramatically from one end of the lake to the other. The upper portion by Luzern is fairly built up with lakefront houses. Further south the landscape gets more mountainous and therefore there are far fewer houses and people in general. 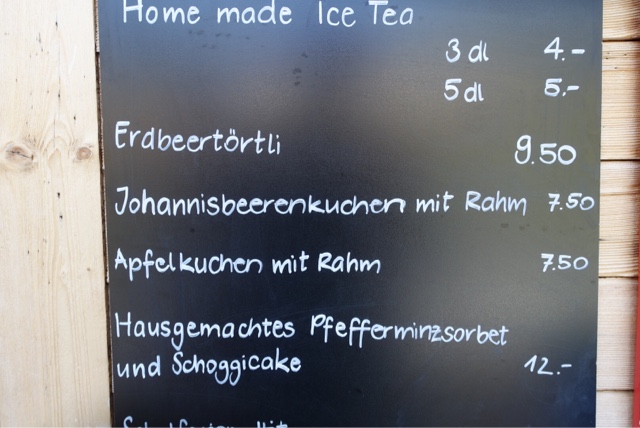 They really like to put words together here into these very long, complicated and impossible to pronounce superwords -- this is known as the "gobbledegook factor" -- every language has it of course, German I believe just happens to have more than its fair share.
We got off the boat in Brunnen for a planned activity with our fellow "Untourists" (Untours is the company through which we've rented many of these apartments this summer). The plan was to visit the Victorinox facility where we could order a custom Swiss Army knife for ourselves. Russell was hoping we would be able to see the manufacturing plant. Unfortunately all we saw of that was on a seven minute promotional video. There was also a lot of information there about the surrounding area which they referred to as the "Swiss Knife Valley" (I am not sure anyone else calls the area this or not. Certainly, it's not a phrase that I've ever heard before). Once in the showroom we decided not to make a custom knife and instead just went with a couple off the rack ensembles as it were. I choose the "Swiss Champ" while Russell choose the "Mini Champ" if you must know. Afterwards we took the train back to the apartment not getting home until after seven. Trying to figure out my Swiss Army knife on the way home -- yes those are tweezers -- it has tweezers and a toothpick and a nail file and two knives and ... and ... and
Now, on a totally unrelated note -- well not totally unrelated because I mean this does have to do with Switzerland -- so anyway, I am amazed and appalled by the amount of smoking we have been witnessing/subjected to here in Switzerland. What is up with that? I thought Swiss people were smart. I just never imagined there would even be smoking here in this land of mountain air, alpine wildflowers and cows with bells (now that is totally unrelated -- I mean seriously what do cows with bells have to do with smoking?). But we've seen a great deal of smoking. And they seemingly have no qualms about smoking no matter the number of people who are not smoking around them. If it's permitted, then they are going to do it and don't even try complaining or making a face and waving the smoke away violently as I am want to do. They are not going to stop. Or move. In fact, they are very likely to start blowing the smoke in your direction or maybe I am just being paranoid. It's hard being in Europe though with all the smoking and I am a former smoker so when I am not complaining about the smoke in my face I am longing to light one up and start all over again. To put it simply, I just don't like smoking taking up so much space in my brain or in my day as it does here in Europe. At home, it seems I think of smoking much less and I certainly have to deal with actual people smoking far less. And that's nice. That's the way it should be. Everywhere. No, I am kidding. But seriously not everything in Europe is better than in America (just most things -- wink wink). 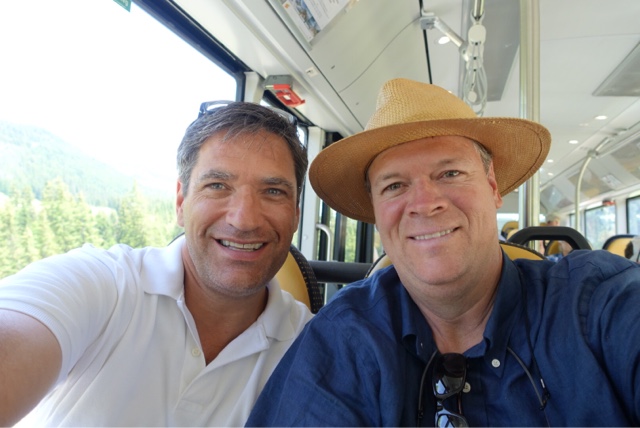 Just because I like this picture of us -- don't want you to forget what we look look like!
Posted by Russell at 2:53 PM