Well, we’ve been busy. No slacking for us. Yesterday we were up early and after a long walk we were at the Tower of London before it opened at 9:00 am. Pretty good for us I must say. We went straight in to see the Crown Jewels before the line got too long. It was interesting but they have you on a moving sidewalk in front of the Crown Jewels so not much time to look — hah! Still it was spectacular of course. And we saw the actor Patrick Neil Harris who was there with his family. After the Crown Jewels it was off to the White Tower where we saw lots (well not lots but enough) armor and weapons of various sorts including a beheading block and accompanying blade that executioners wield when doing there dirty work. Gruesome. 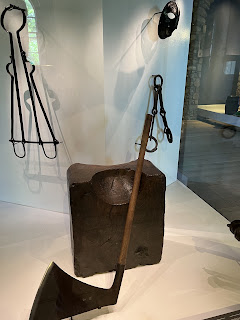 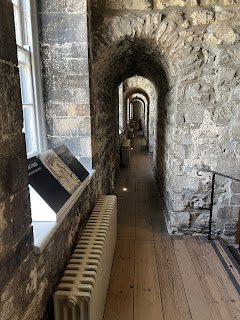 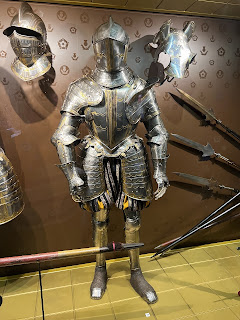 We also saw the famous ravens before departing well before it got too busy. Next we crossed the Thames to visit Borough Market, a real food market where we were able to see locals shopping for produce and speciality food products. I say that this was a “real” market to distinguish it from the Covent Garden Market which is decidedly more touristy in nature. After walking past the original site of Shakespeare’s Globe Theatre we visited the Tate Modern. The museums here are free admission  which is awfully nice but I did purchase tickets for the special exhibition on Surrealism. The building is quite remarkable but as for the art — well, I didn’t care for most of it. I always feel like an idiot when I am in a museum and I’m busy looking (with lots of other people) at art that I don’t understand and probably wouldn’t think was very good if it wasn’t in an “important” art museum. 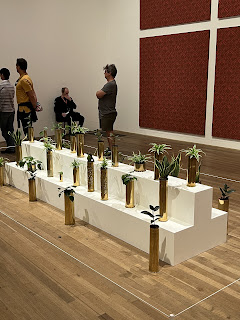 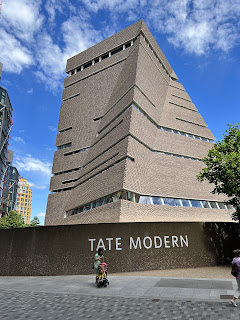 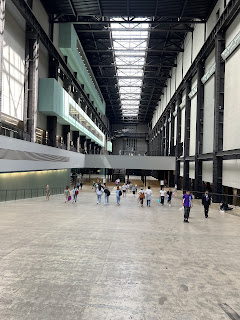 Our final stop for the day was St. Paul’s Cathedral which was back across the Thames. Beautiful building but by this time we were pretty tuckered out so we headed back to the hotel for a rest. Dinner was at a place called The Wolseley. It was very nice. Russell and I shared Coq Au Vin for two and although a bit different than what I was expecting it was very tasty. 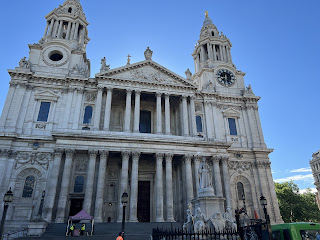 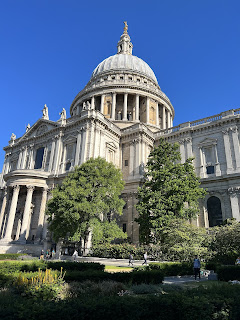 Today Russell went out to a local bakery and brought pastries and doughnuts back to the room for breakfast and then we left for the British Museum. The line for admission was quite long but thankfully once they opened the doors at ten it took awhile for the place to feel busy and so we were able to see the Rosetta Stone, the Parthenon marbles and a good deal of other antiquities in rooms that were quiet and relatively unpopulated — a real treat! What a collection too. Amazing, especially the Egyptian artifacts — incredible. Once it started to get loud and busy we shoved off. Next on the agenda was Queen Mary’s Rose Garden (which is so much more than just roses) in Regents Park. It was a bit of a hike to get there but we managed and after a quick bite to eat at a cafe next to the tennis courts we took a nap on the lawn before strolling the garden. The weather has been awesome. Pleasantly warm with generous sunshine and most importantly no rain. 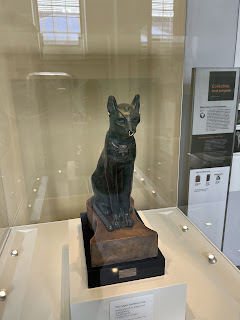 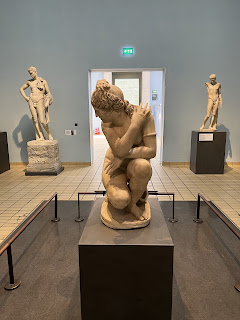 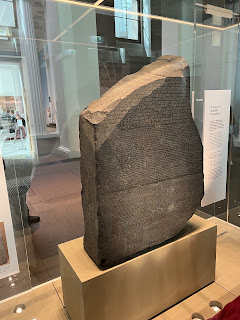 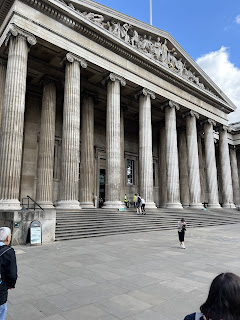 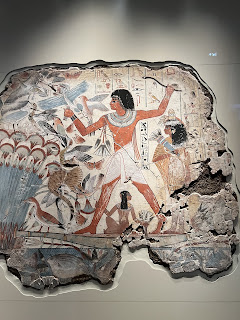 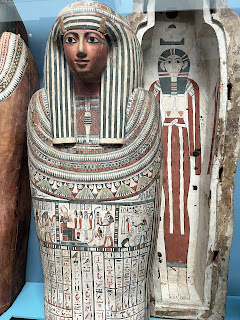 After the Rose Garden we walked to Daunt Books which has the most amazing collection of travel books you’ve ever seen and it is tremendously atmospheric as well. Of course I purchased a few titles to add to the other books that I’ve already bought (we stopped at Hatchard’s last night after dinner). Don’t ask me how I’m getting all these books home as I only brought one suitcase and it was packed to the gills on my way here but we will cross that bridge when we get to it. 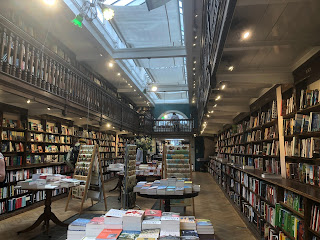 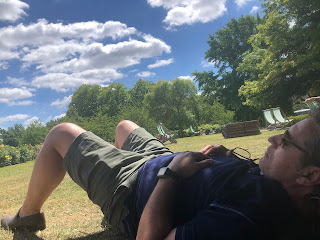 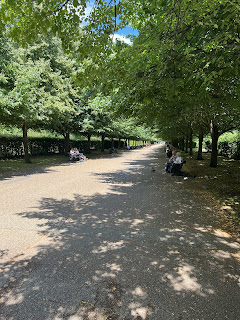 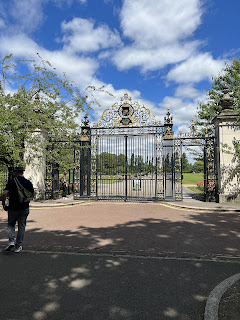 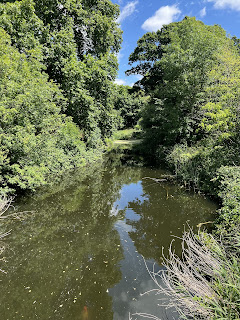 We taxi-ed back to the hotel to save our poor feet (we’ve got a flower show to go to tomorrow) and enjoyed a cappuccino and some people watching in the late afternoon. Dinner was supposed to be at a place called Frenchie but when we got there they didn’t have our reservation because stupid OpenTable switched our reservation to the same titled restaurant in Boston rather than London. I was afraid that might happen but it was just as well because we had dinner at Punjab an Indian restaurant near the hotel where we were seated right away and also where the actor Ben Kingsley was having dinner with his family (our second celebrity sighting in as many days. Back in the hotel room now relaxing and getting psyched for the Hampton Court Flower Show tomorrow — very exciting and the reason why we came to London at this time. I’m hoping that my feet hold up tomorrow because the back of my heal is raw and blistered but I’m going to put a bandage on it and hopefully it will be fine.
Posted by Russell and Stephen at 12:49 PM