On our last day in London, we once again headed to the burbs to visit Kew Gardens. The weather was once again clear and sunny but getting on the warm side of pleasant. We decided to be a bit extravagant and take a taxi to the gardens because the alternatives (bus, train) necessitated transfers and/or walking (and possibly a taxi ride anyway). So, we bit the bullet and decided to make it as convenient as possible for ourselves. The garden itself is beautiful and quite varied with flora from around the world represented. I particularly enjoyed a special exhibition on “When Flowers Dream” which was truly fantastical. I also very much appreciated the botanical art displays in the Shirley Sherwood Gallery and in the Marianne North Gallery. Marianne North was a new artist for me. She was a late nineteenth century artist who traveled the world documenting exotic foliage and landscapes. The greenhouses were also quite special as they were mostly classic crystal palace-type in design and even included elevated walkways so you could see the treetops and foliage from above. We passed a couple of pleasant hours before hailing another cab to head back into the city. Unfortunately, there was some sort of road race going on and the traffic was terrible. We ended up bailing from the cab and hoofing it the rest of the way to the hotel. Ironically along the same route that I referred to as the “death March” from a couple days earlier. This time however it didn’t seem quite so bad so that was a good thing. 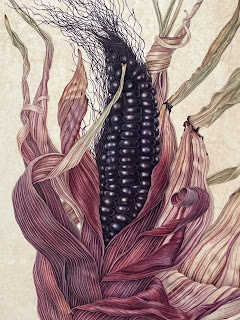 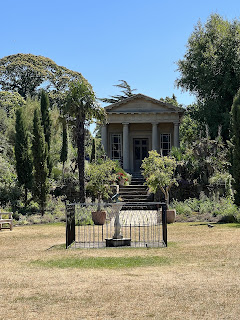 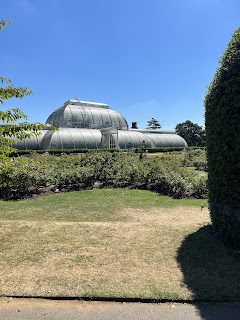 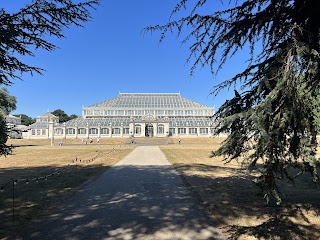 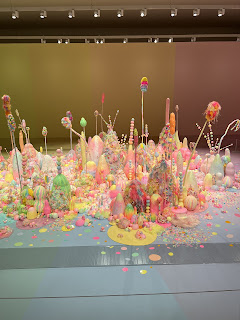 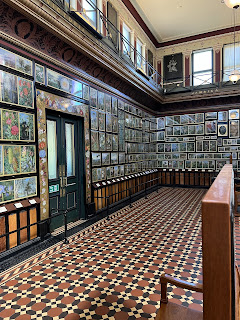 Dinner was at a small place called Palomar. It was quite good. In fact all the food we had in London was more than satisfactory but walking back to the hotel we both decided it was time to shove off from London. So many people. We are looking forward to getting out into the countryside.

So, this morning it was time to pack up and head to the airport to pick up our rental car. Our driver unfortunately didn’t know the way to the Avis location and we ended up with an unnecessarily large taxi bill. Frustrating. But what are you going to do? Make a scene and refuse to pay? Not our style. The rental car place was busy and chaotic but fortunately for us they had our reservation and the promised automatic transmission vehicle. After gathering ourselves, adjusting mirrors, etc., we hit the road — the left side of the road that is. Our first stop wasn’t far away, only fifteen miles or so: RHS (Royal Horticultural Society) Wisley Gardens. After our somewhat stressful morning, we wisely decided to visit the cafe first and have a little lunch. The gardens were lovely with lots of flowers in bloom including a good amount of roses. Russell really enjoyed the rock garden and I was most impressed with the extensive greenhouse they had which featured lots of tropical plants in bloom including some I don’t think I’ve ever seen. It was hot though. In the nineties today I think. Anyhow we faded after a couple of hours and headed back to the car. 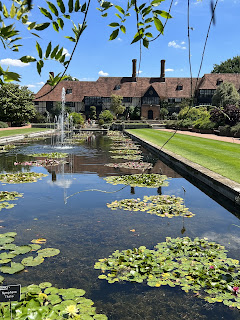 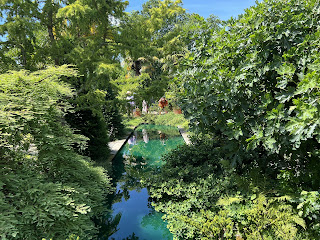 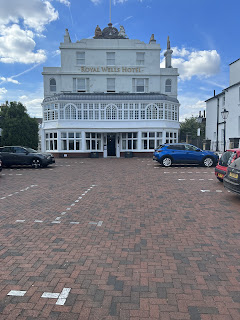 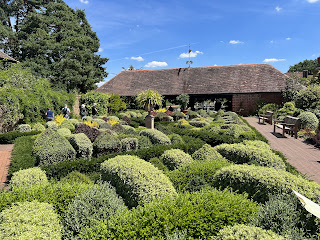 Russell did an excellent job of driving today staying calm and showing no hesitation in dealing with driving on the “wrong” side of the road. Wisely we decided to get the navigation system with the car and not rely exclusively on our phones. So far at least the nav system has worked well for us with plenty of timely guidance.

We arrived here at the Royal Wells Hotel in Royal Tunbridge Wells in the mid-afternoon. The hotel is quite tattered around the edges with lots of small (and large) details overlooked and frankly it was a disappointment given the fabulous hotel we were coming from but again, what can you do? Our room is nice enough it’s just that the whole place has a forlorn quality about it which is quite depressing. Still, we are not here for the hotel and it could always be worse. I’ll try and make the best of it and hopefully in the morning it will seem nicer to me than it does now.

Posted by Russell and Stephen at 1:16 PM