Reykjavik, Iceland yesterday and already after a full day steaming towards Greenland it feels a million miles away. We spent Monday visiting the Blue Lagoon. You've probably seen photos of this place. It's a large, organically shaped pool filled with beautiful milky blue water with lots of steam rising from its heated surface and various overweight, bikini clad Europeans. 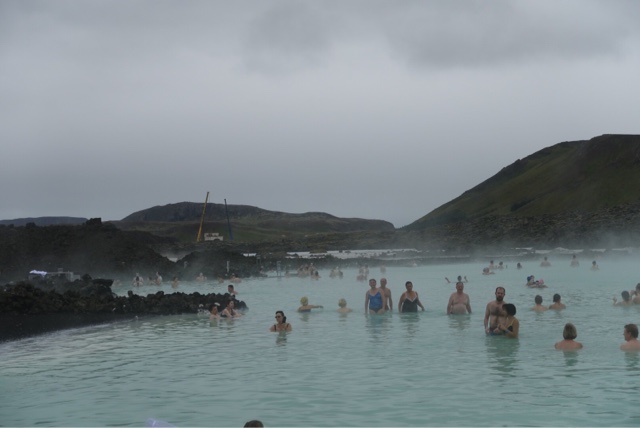 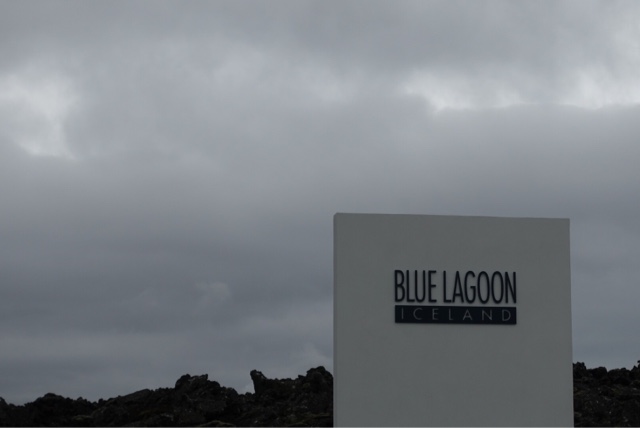 Stop. Back up. The bus ride to the Blue Lagoon was interesting. Reykjavik, at least the bits that I saw, held little charm for me. It's a modern city, not really walkable (again at least the parts that I saw) and it was a bit jarring to see so many vehicles, sprawl and modern highways after our previous three stops each of which was progressively smaller and more remote than the last. 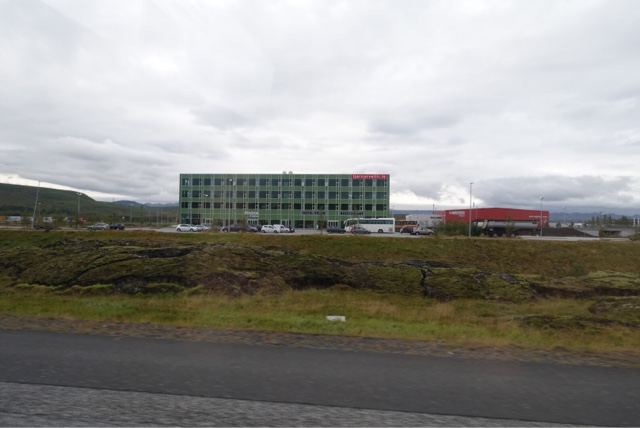 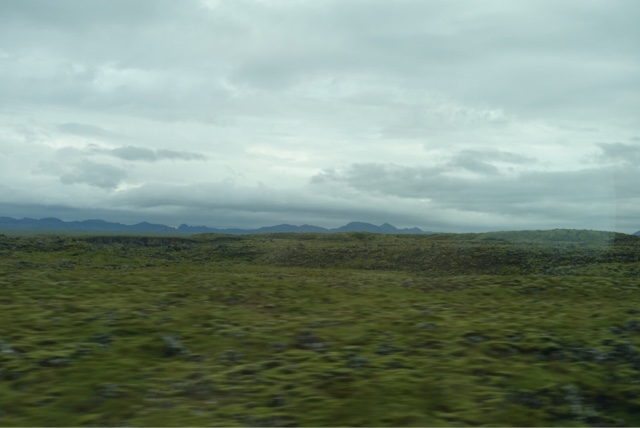 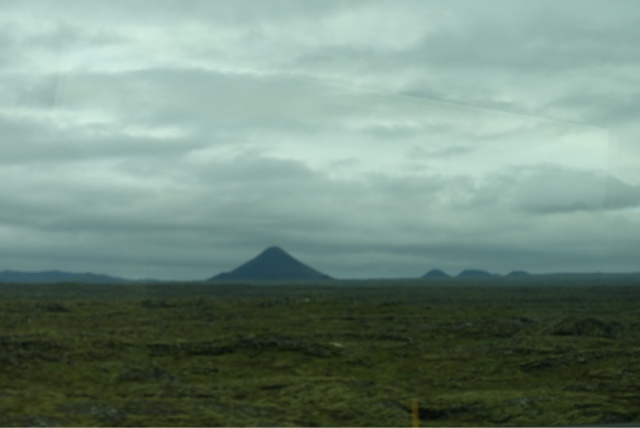 Are we on the moon?
At a couple miles outside city, the landscape changes noticeably becoming cracked and split
as if an earthquake has just happened or the magma has just cooled. It's very different these geological landscapes (that is landscapes where the force of geology predominates as opposed to say a vegetative landscape or an oceanic landscape) such as we've seen in the Faroe Islands and here in Iceland. Makes you understand why some people go gah-gah for geology (actually it doesn't make me understand it completely but that's another story).
Basalt predominates. Sharp stones are everywhere and it looks as if you would need surfing booties to walk on them. In some areas the effect is softened by a blanket of moss and lichen. 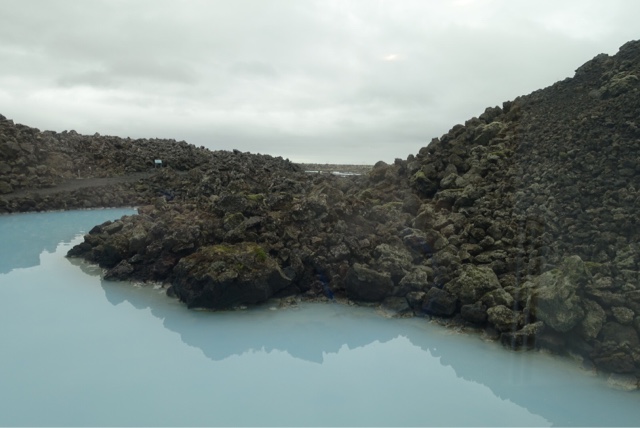 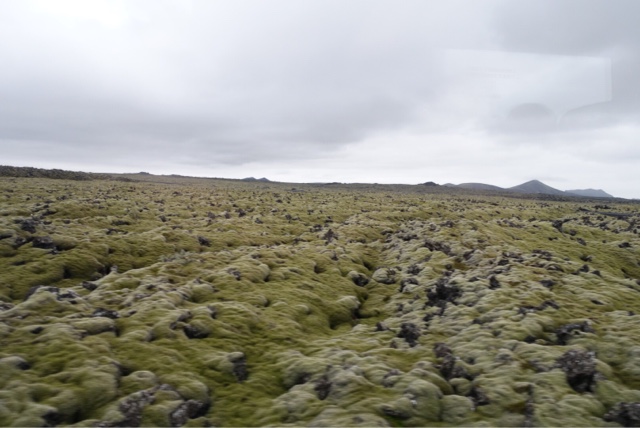 The weather is as it has been, that is to say cold and gray. The guides and cruise ship people keep referring to the "fine" weather we are having or even the "beautiful day" but I just can't buy it. Calling the weather "fine" and "beautiful" does not actually make it so and if these people think that  forty eight degrees in the middle of the day in September with no sun to speak of is "fine" or "beautiful" then I want some of what they're smoking.
I digress. So the landscape is sharp, porous black volcanic stone. As we walk from the parking lot to the entrance we are sheltered by two walls, eight feet high of what looks like plowed macadam. Strange. 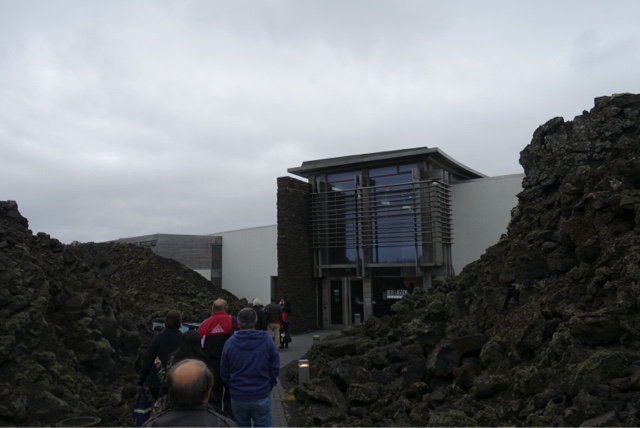 Two walls of plowed macadam along the walkway to entrance
The Blue Lagoon itself is thirty minutes outside the city. It's rather an elegant building with a nicer-than-they-have-to-be shop and cafe. They've got an interesting system involving bracelets that you wear (they're waterproof) and swipe over sensors to open a locker or purchase anything. All in all its well done and it's hard for me not to envision the schlocky, honky-tonk, overdone, over merchandised travesty that this place would be in America. 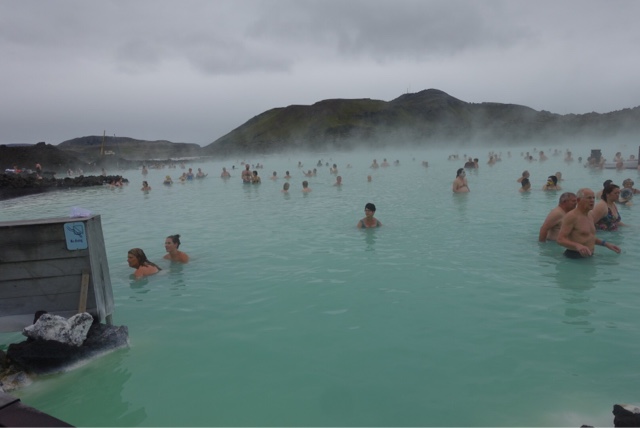 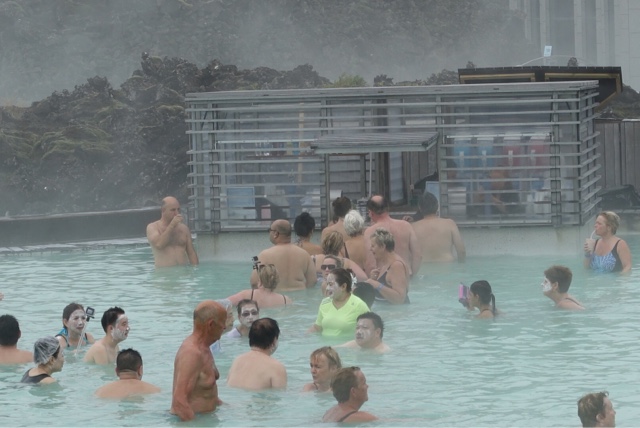 Note the preponderance of white faces
The water itself is a perfect temperature. Warm enough to banish the cold air but not too warm to make you sweat and overheat. Some people are rubbing white mud on their face and hair. I refrain. About the only thing to do is to relax, search out warmer areas or find a place to sit. After an hour or so it's time to go and I can cross that one off my nonexistent bucket list. 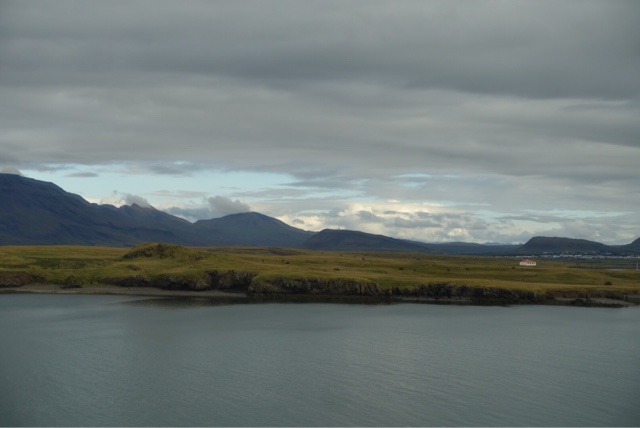 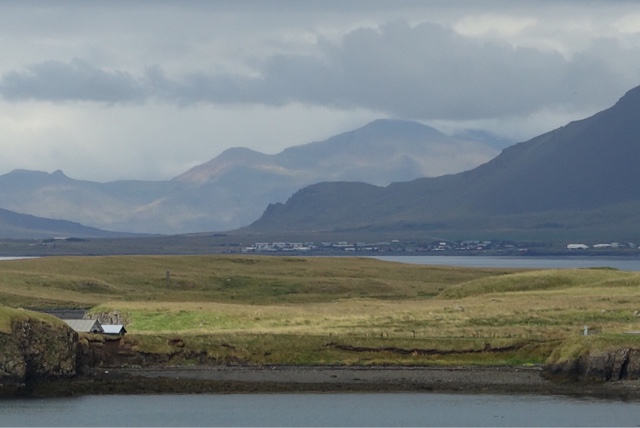 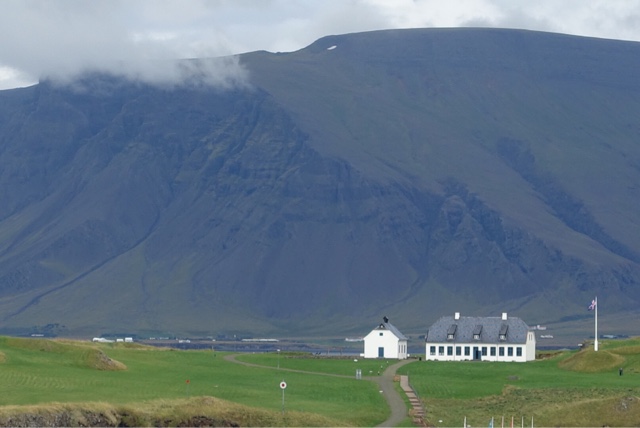 Photos from the boat in the afternoon
Today was spent, in part, attending lectures onboard. At nine am (easy to make despite my propensity for late mornings because we've been turning our clocks back) there was a lecture on the arctic. That was given by a retired Army Captain who was well prepared and informative. At ten there was a lecture on Greenland. Both of these lectures were very well attended. A zoo you might have called it. Russell and I had good seats because we arrived twenty minutes early. For the two o'clock lecture on our next ports of call we knew we were going to have to get there early so we arrived at one thirty, a full thirty minutes before the lecture was set to begin and the place was already one third full. By quarter to two it was standing room only and fights were breaking out over "held" seats. I am telling you these people are vicious. It's like they've got nothing to do all day. Oh wait -- they don't have anything to do all day!
At any rate, this third lecture was immediately put up on the ship's television station so that those who were too stupid to arrive early -- wait, I mean those people for whom there were not enough seats -- could watch it. If they had only said prior to the lecture that it would be broadcast immediately after it was given they might have prevented the overflow crowd and at least a couple of ugly moments.
Posted by Russell at 1:31 AM