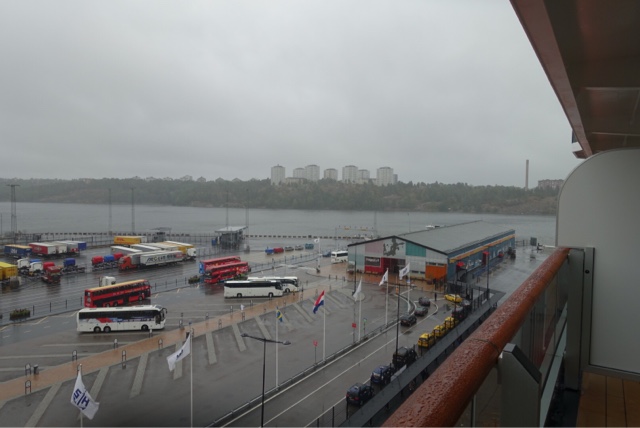 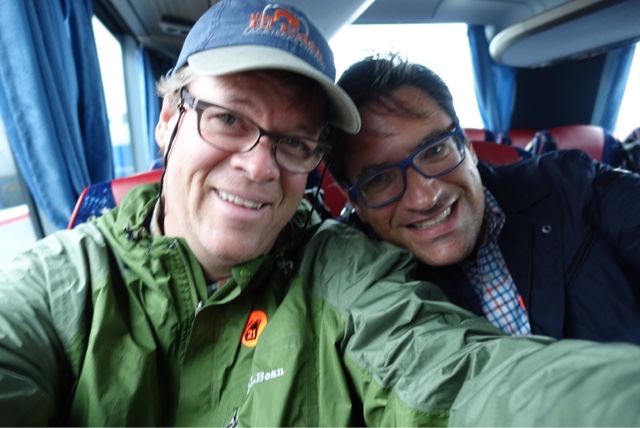 We're still having fun though
Stockholm yesterday and Wednesday. We had one day of good weather (Thursday) and one day of not-so-good weather. The weather didn't impact our plans though. On Wednesday we went for an afternoon bus tour of the city and tour of the Stockholm City Hall. My first impression of the city was not tremendously favorable as the bus tour began with a ride through a fashionable residential neighborhood followed by a cruise down one of the main shopping streets. I say "one of the main shopping streets" because there are many shops in  Stockholm. This is a shopping town. Between the chic living spaces and the jammed stores I wondered if we hadn't suddenly stumbled onto some Capitalistic utopia but gradually my misgivings gave way to a more positive feeling for the city. 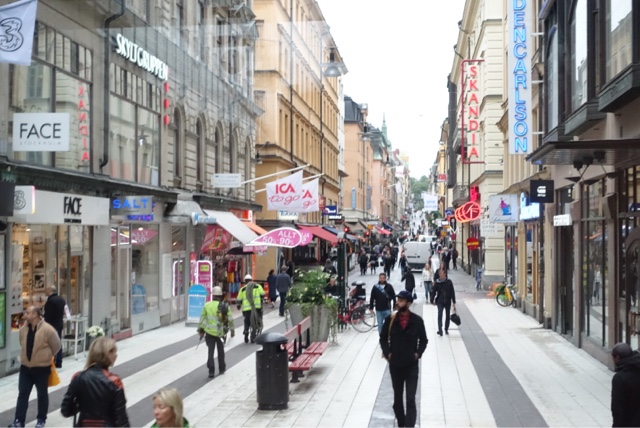 Shopping street (one of the many) 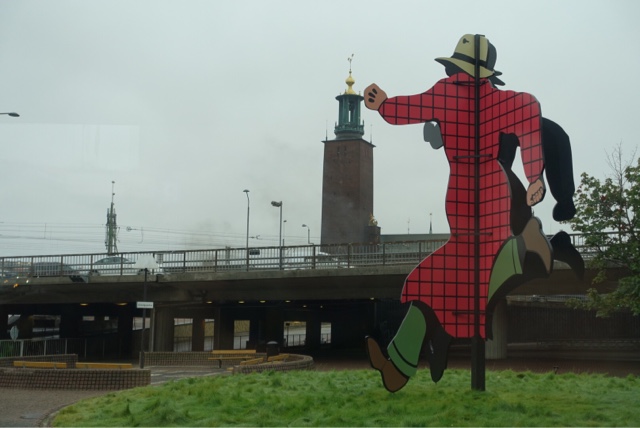 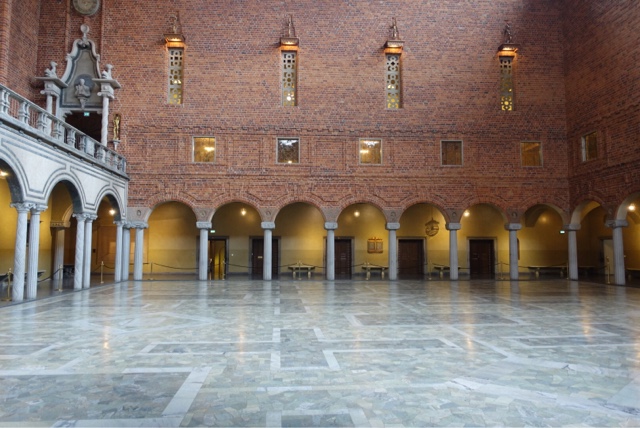 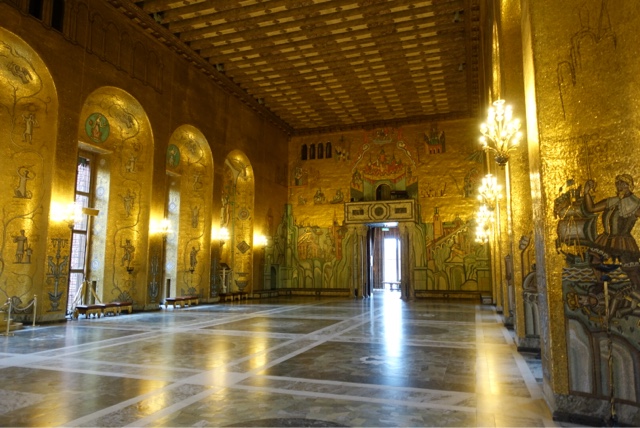 Gorgeous mosaic work, Stockholm City Hall
Certainly it's a prosperous city. And acquisitive that's for sure. Plenty of conspicuous consumption here. There's a Gucci store, 'nuf said? Hard to imagine Helsinki with one of those. But Stockholm is a much larger city than Helsinki (2 million vs. 800,000). It's prettier too. There's lots of water, islands and green space. Also, the architecture while perhaps not of the same quality as Helsinki's is more exuberant and easy to like. 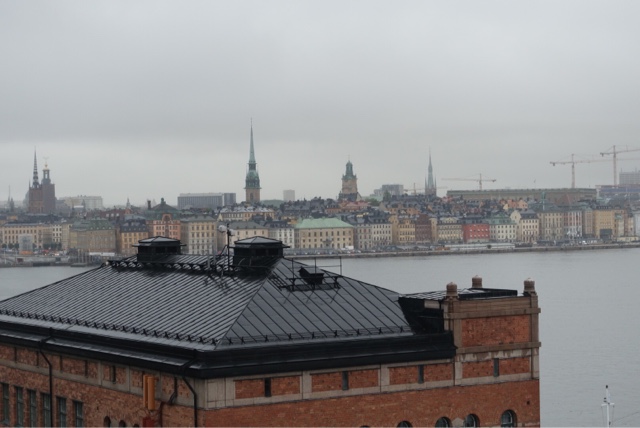 View of Stockholm from scenic viewpoint
The Stockholm City Hall is only one hundred years old but it's already become a must see attraction. It's made of brick, austere and with its large bell tower could easily be mistaken for a Protestant church. The Blue Room (which is neither blue nor a room but rather a courtyard or atrium space) is where the annual Nobel prize dinner is held. It's a lovely space but the real showstopper comes just up the stairs. Another large hall, the walls are covered with mosaic scenes and individuals from Sweden's real and mythological history. There is a gold mosaic tile background  and so the overall effect is a soft yet sensual shimmer. It's quite something. 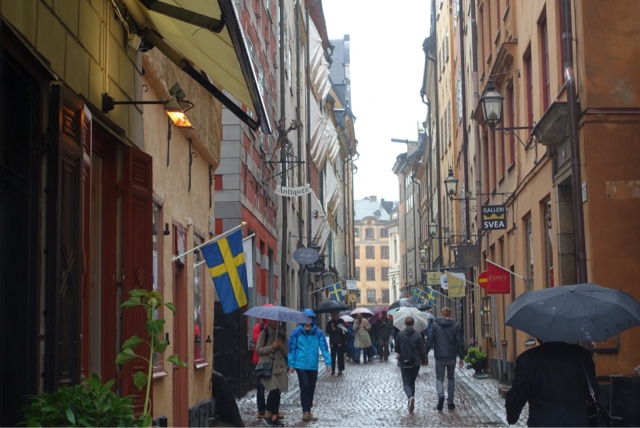 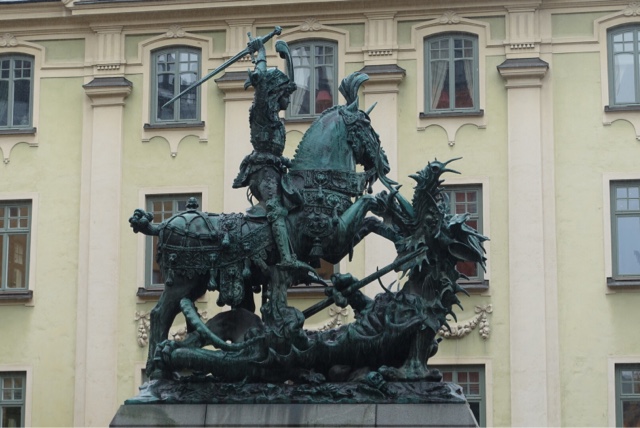 St. George Slaying the Dragon (it's a big thing over here, we've heard about him and the dragon all summer!)
On our second day in Stockholm we went in two tours organized by the ship. The first was another bus ride around the city but it was okay because we saw some stuff that we had not seen before and the weather was much improved so things looked different as well. The main goal of this first excursion was the Vasa Museum. The Vasa was a ship commissioned by the King of Sweden and completed in 1628 (I think). On its maiden voyage it managed to go one thousand feet before a big gust of wind caused it to sink in the harbor which is where it stayed for the next three hundred plus years. In the 1960's the boat was brought up and preserved. Miraculously 98% of the original ship was able to be restored. The ship is very impressive, especially the ornately carved rear portion however you are not, of course, allowed to walk through it. But it doesn't matter because the museum's exhibits are so well done you get the feeling of the ship and the whole story that the ship has to tell without ever laying a foot or a finger on it. It's a very well done museum and I say this even though I went into it thinking, "A rescued ship? Big deal". 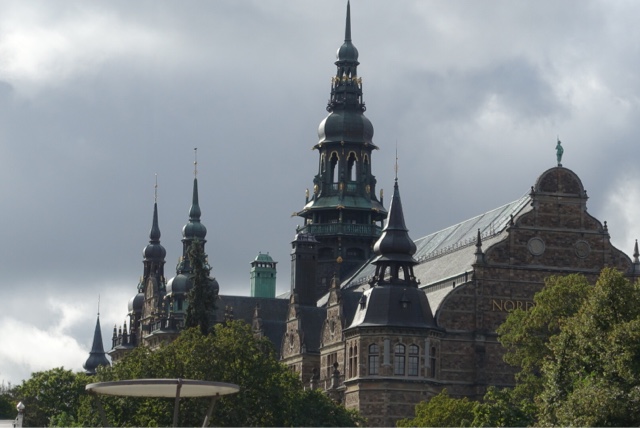 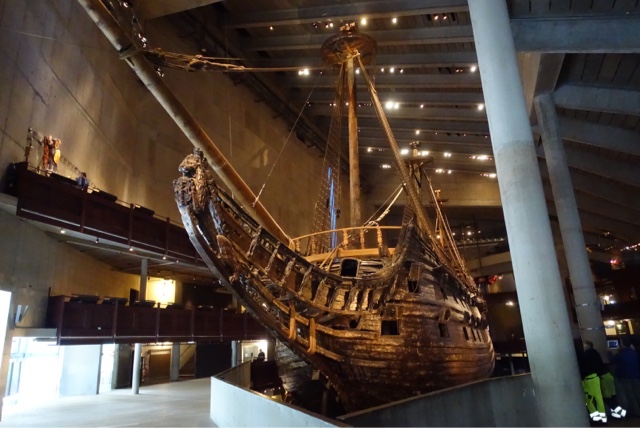 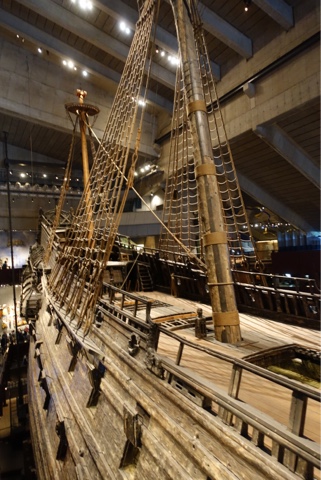 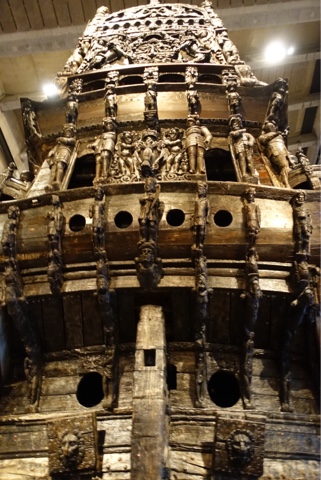 Carved rear end of the ship
We returned to the Eurodam in time for us to grab a sandwich and something to drink before getting onto another bus for our afternoon tour to Drottingholm Palace. This palace is located about thirty minutes outside the city and is the residence of the current King and Queen of Sweden. They live in one side of the palace and we visited the other side. I have to say I wasn't terribly impressed with this place. Could be that I was tired though. It does have a lovely setting complete with lake on one side and formal gardens on the other side.  However, the rooms were filled with second-rate paintings(IMHO) of royals and gigantic tapestries that didn't really speak to me. The fact that the rooms were stuffy, the group was large and the security guard insisted that I wear my heavy backpack in front of me didn't help either. What did help was the coffee and raspberry tart we had during the thirty minutes of free time we were given. Then it was back into the bus and all aboard the ship for a four o'clock sail away from Stockholm. R and I sat on our verandah and enjoyed the exit through the archipelago of Stockholm (30,000 islands they say). Dinner was at the Asian speciality restaurant aboard the ship. The food was only so-so and the service was at once overbearing and insipid but the view was special -- sunset over Scandinavia. Hard to beat that. 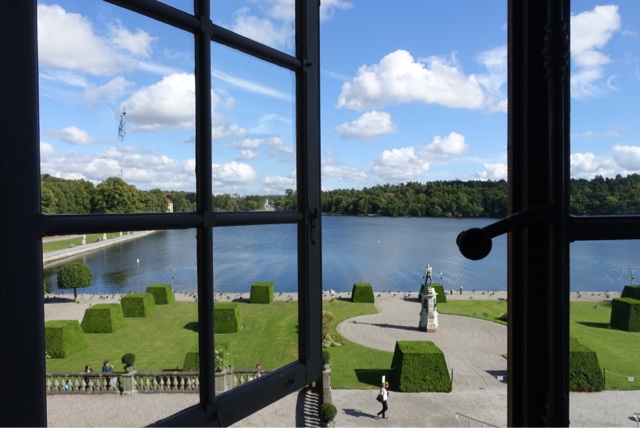 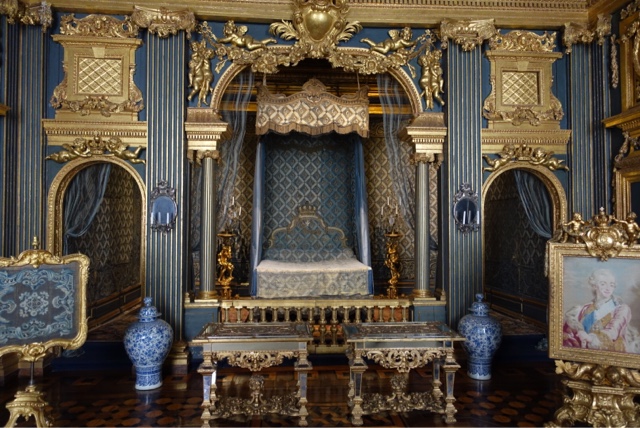 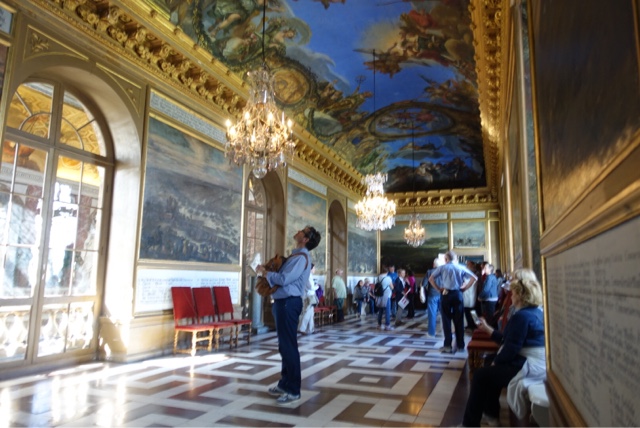 Me with backpack in front 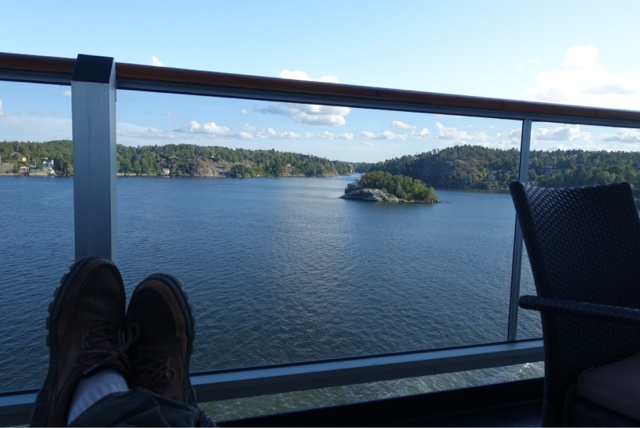 R with his feet up, watching the Stockholm archipelago fade into memory
Posted by Russell at 8:28 AM