I am going to start with today and then I'll  talk about yesterday (I probably should have blogged yesterday but was lazy). Anyhow, today we were in Lerwick, Shetland which is part of Great Britain. I didn't know what to expect here and at first it seemed there wouldn't be much to see. No trees at all just rolling green hills, a rocky coastline and a small harbor town with gray stone buildings. We had to tender to the island so Russell and I waited until the initial surge of guests left the boat before we tried to get off and that proved the right decision. 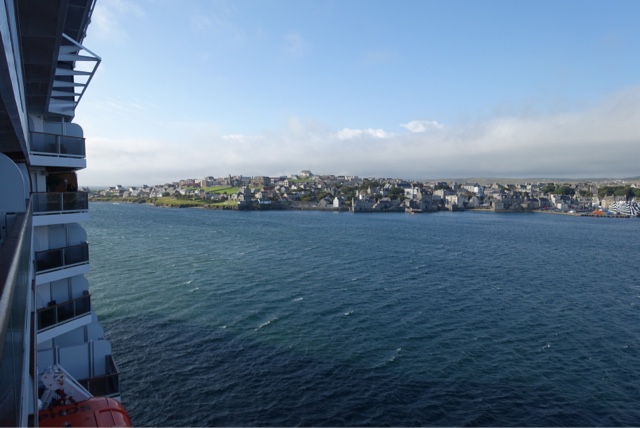 Shetland from the boat 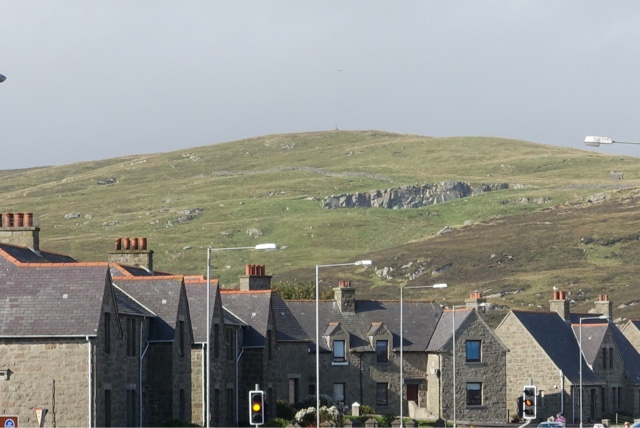 On the way out of town 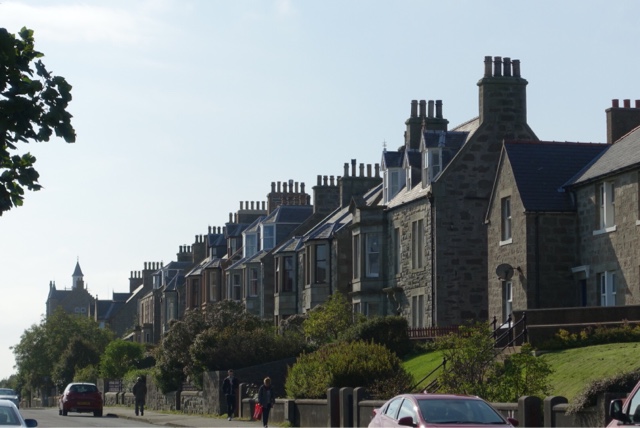 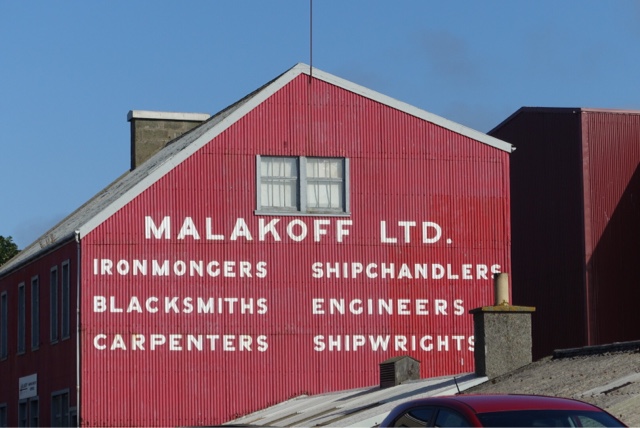 Not a sign you see every day -- what exactly does a shipchandler do?
The island with its gray stone buildings in what I imagine to be Scottish style doesn't exactly scream "Welcome" but as we walked further from the town the island began to reveal its charms. Not the least of which was the abundance of flowering plants. Based strictly on the amount and variety of blooms you would have sworn it was May and not September. We saw monarda, hosta, fuchsia (including in hedge form!) potentilla, marigolds, roses, I could go on. The point is that it was lovely and completely unexpected. The weather, which I have failed to mention so far, was, I suspect, just about as good as it gets here in the Shetland Islands with variable sunshine, a light breeze and low sixties. So, between the weather, the flowers, the tidy houses, the stunning vistas and the well-maintained path that took us around the back of the island before dropping us at the opposite end of the harbor's Commercial Street, I was ready to start looking at houses for rent. I am kidding of course but life on Shetland is not without its charms though I suspect they are normally more sparsely doled out than they were today. 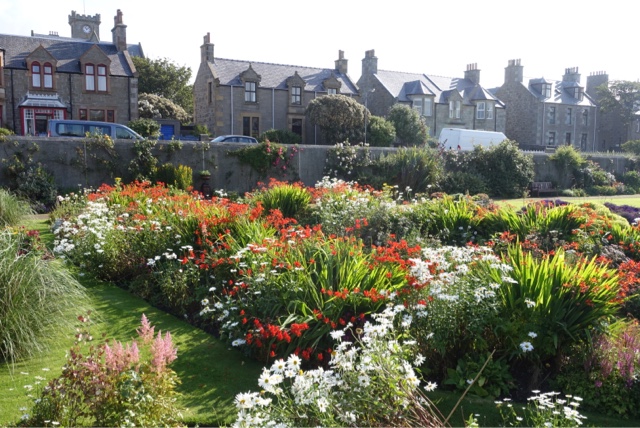 Lovely garden we just happened upon 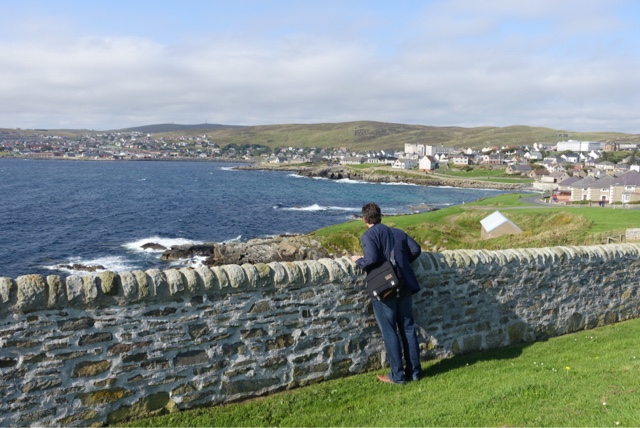 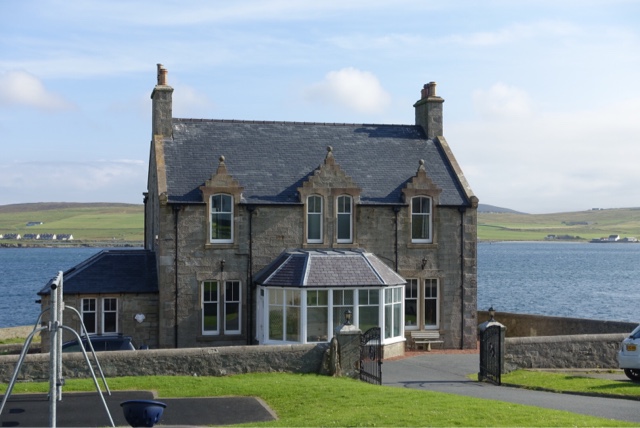 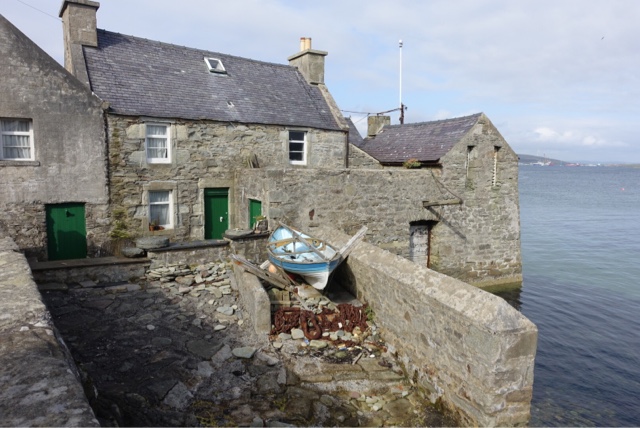 We even managed to find a bookstore -- in English -- wahoo! Lunch was at a small cafe across from the town pier where we discovered, after lunch, that our afternoon tour had been canceled due to the weather/sea conditions. I am not sure what they were referring to because the weather this afternoon continued to be calm and generally pleasant. We didn't complain though and instead took it as an opportunity to needlepoint (me) and download/organize photos (R). 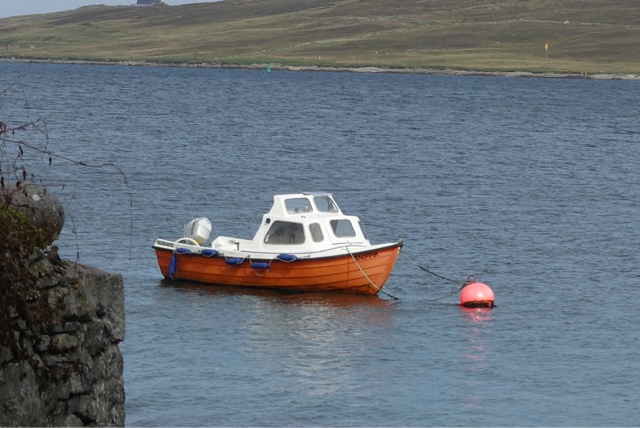 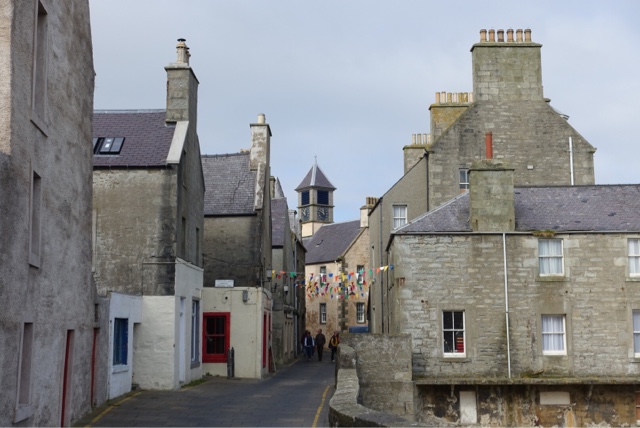 The quiet afternoon also gave us a chance to recover from our rather busy day in Bergen, Norway. We began the day by forgetting the camera, not an auspicious start, however things got better. Our first stop was the funicular which unfortunately was also the first stop for many of the other cruise ship passengers. The line moved fairly quickly and the view of Bergen from the top was spectacular. We were lucky with the weather in Norway also as it was sunny and warm-ish (for them at least -- 67 degrees). We didn't spend a whole lot of time at the top of the mountain as we had a tour to catch to the Edvard Grieg House. This was something I had arranged and so I was a little nervous about it and perhaps also a little fuzzy on some of the details as well. Fortunately it all worked out and we got on the correct bus which it turned out wasn't just a ride to the Grieg house but actually a guided tour so that was a bonus. 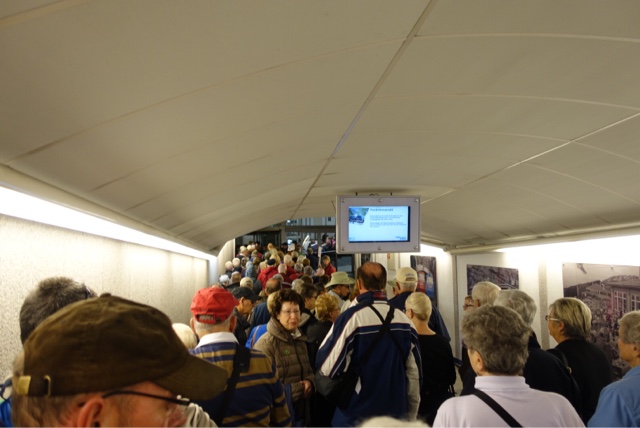 Line for the funicular-- surely wish I hadn't forgotten the camera this morning! Might have been able to beat the crowd. 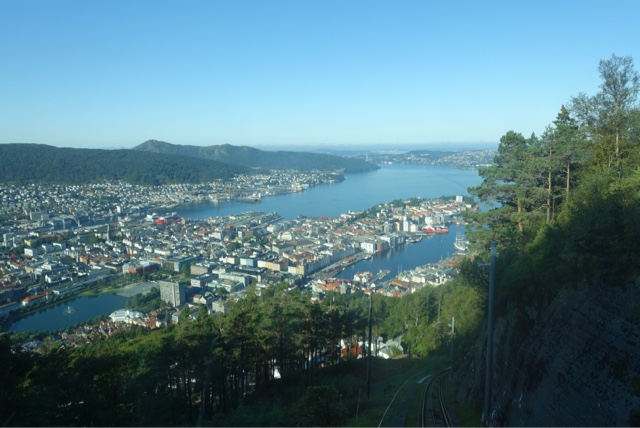 View of Bergen, Norway from up top 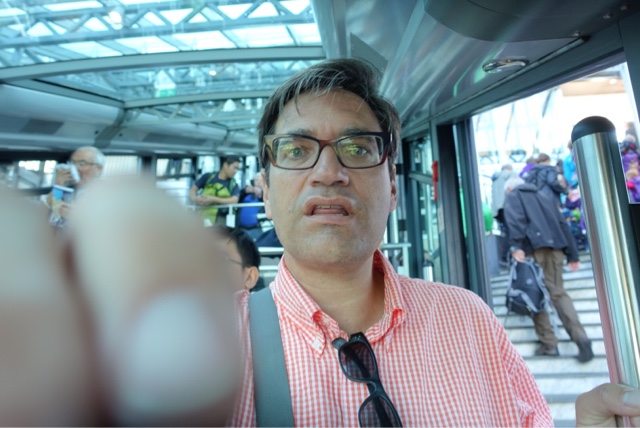 Couldn't resist including this shot because our camera although having taken some incredible pictures this summer has developed an unwillingness to open the lens cover all the way thus necessitating a little flick with your fingernail! Be careful not to touch the lens though. 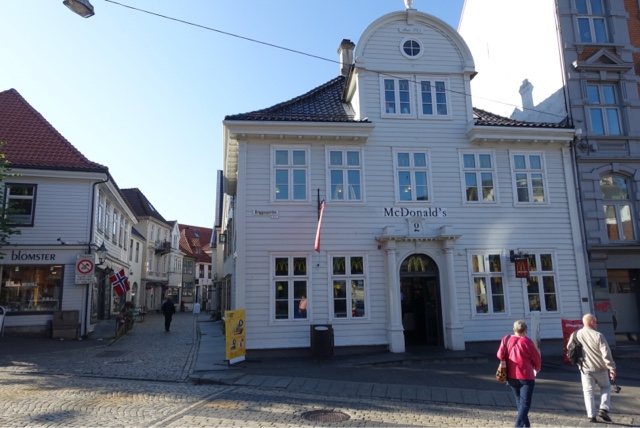 A very discrete McDonald's
The Grieg house itself is a little disappointing as it is small, Victorian and yet plain also, if you can imagine that. It is also located in what had originally been a remote area but which is now rather developed, almost suburban in feeling. The real special part of the visit was the thirty minute piano concert of Grieg's music that took place in the well-designed and ideally situated performance hall. The pianist was quite good though more than a little bit affected. Still, it was a special experience -- to hear Grieg's music looking out over the water in Norway with his special outbuilding where he composed just yards away. 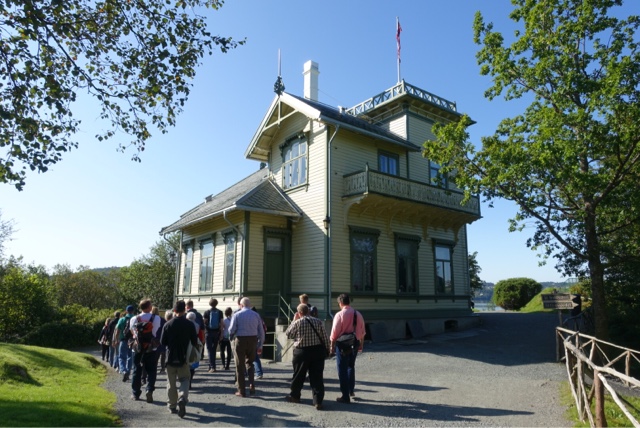 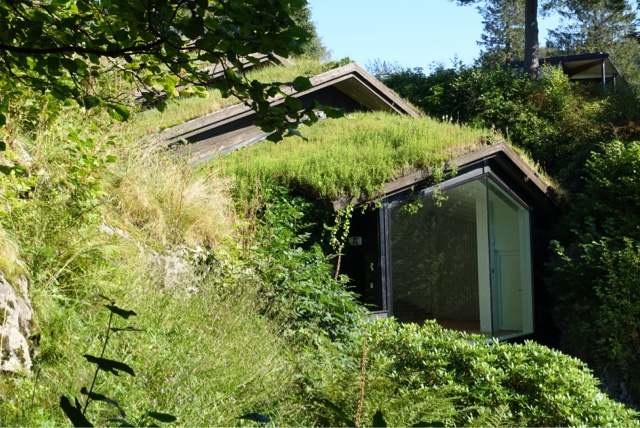 Performance space from outside 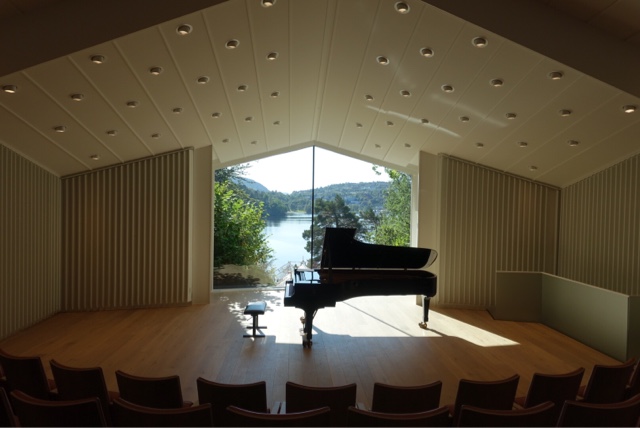 And inside
Back in town, we grabbed a quick bite to eat before meeting up with our private guide for a walking tour. The guide's name was Sue and she was full of information. First stop was the fish market where I tried two local specialties -- hot-smoked salmon (very good) and smoked Minke whale meat (not so good). Sue took us to the backstreets of Bergen where we were able to see all the wooden houses arranged both helter-skelter and cheek by jowl. She also took us behind the row of stores on the main drag that is a Unesco world heritage site and whose name I am blanking out on. Honestly some of the places she took us I would never have even known existed so I am glad we hired her. 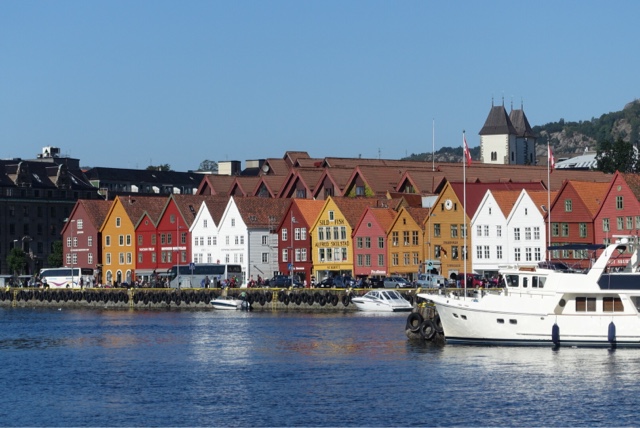 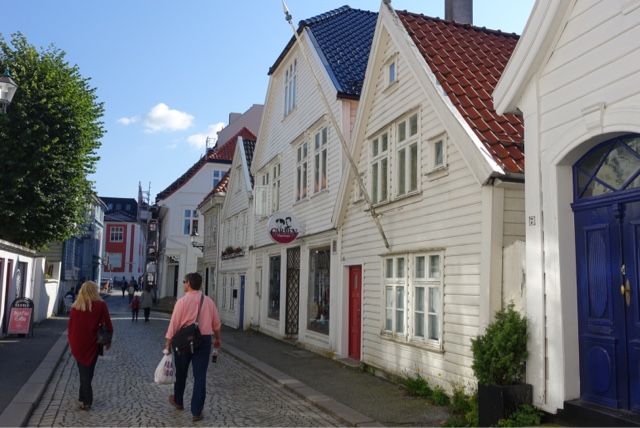 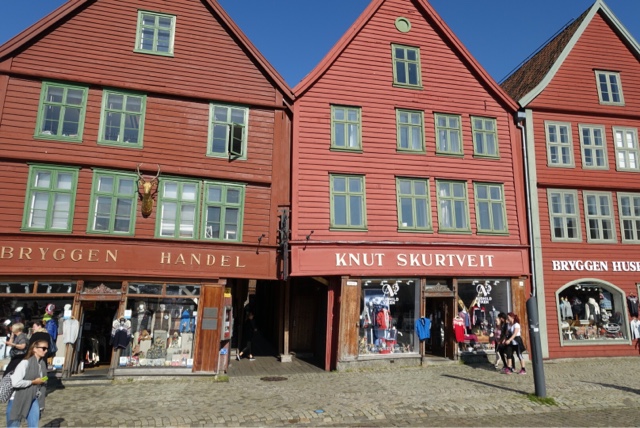 They say it's safe but I ask you -- does it look safe to you? Me neither. 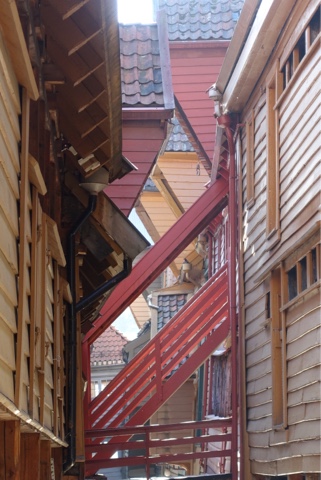 Fire was a serious problem in Bergen -- I wonder why?
But it was a long day and we were back at the boat only a half hour before take off. The exit from Bergen brought us through another archipelago of picturesque islands which made for pleasant viewing at dinner. Later in the evening we passed a half dozen or so oil rigs on the North Sea. It was interesting to see them (they certainly were large) and surprisingly the sea was quite calm, tranquil almost. Tonight however we are experiencing a little rocking and rolling as well as squeaking and moaning to accompany the normal slamming of doors and thud-thud-thud of the heavy footed upstairs "neighbor". (You see? It really is me. I know that you were worried someone else had commandeered this blog what with all the positives I dished out tonight. So, I thought I better include just a hint of negativity to prove that it's really me writing this!) 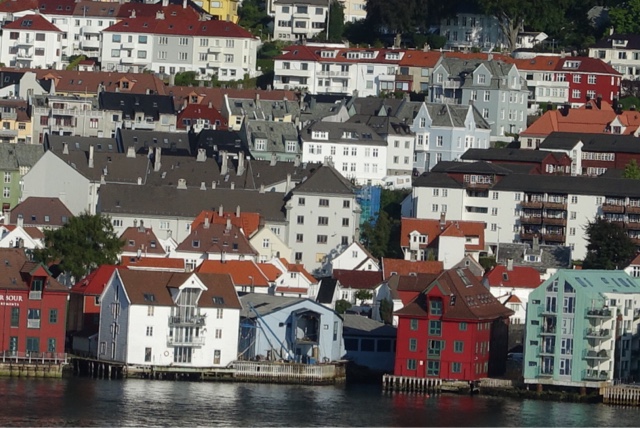 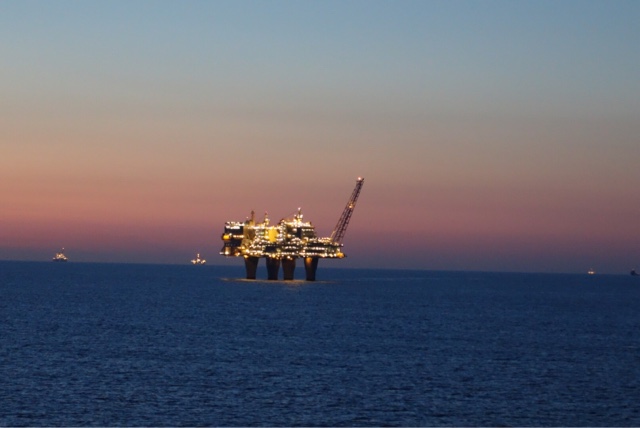 North Sea oil platform(s) from our balcony
Posted by Russell at 12:58 PM