Two more days in Copenhagen-- yesterday and today. I should say outside Copenhagen because both days were spent exploring the surrounding area. Though not entirely. Allow me to explain. 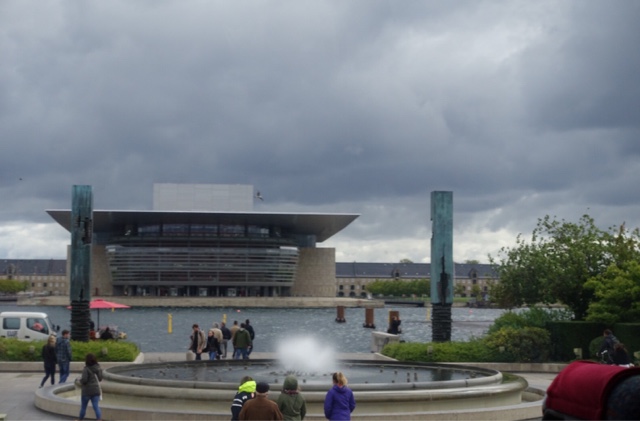 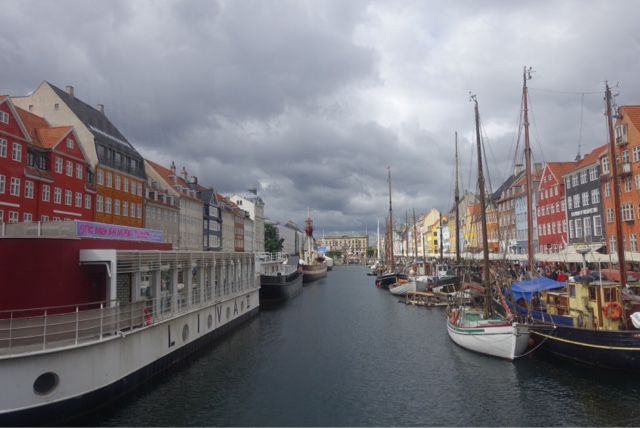 Now we did see this area -- both times!
On Sunday we took an excursion to Dragoer which is a fishing village just outside Copenhagen, near the Copenhagen airport. Before we arrived in Dragoer we did an abbreviated bus tour of Copenhagen and I am embarrassed to admit that Russell and I saw much we had not seen during our previous ten day stay in Copenhagen. Now that either says a lot about the bus tour or it says something about your intrepid correspondents who may not have explored as much of Copenhagen as they perhaps should have. We're tired, what can I say? 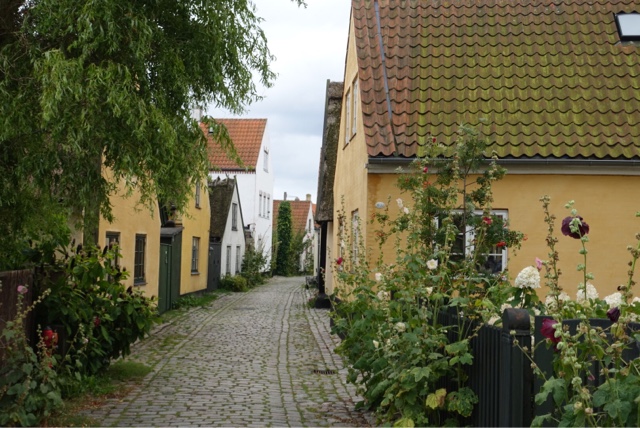 The fishing village. In one direction. 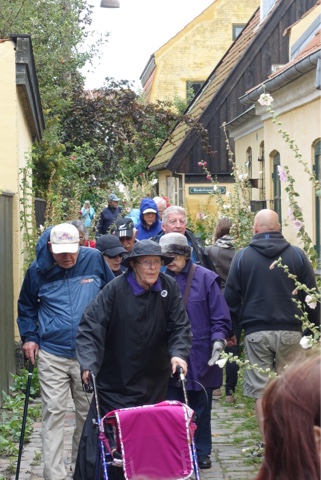 And in the other direction. 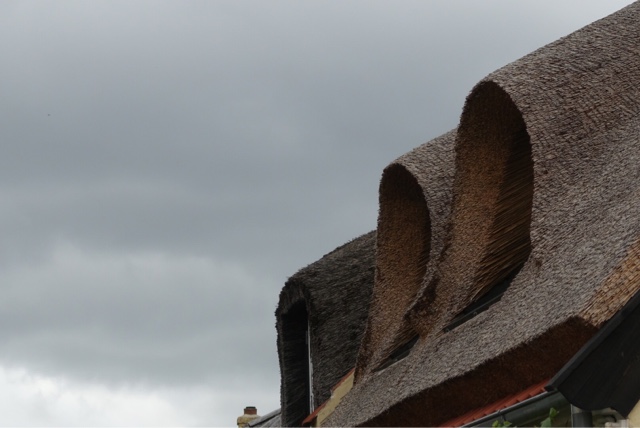 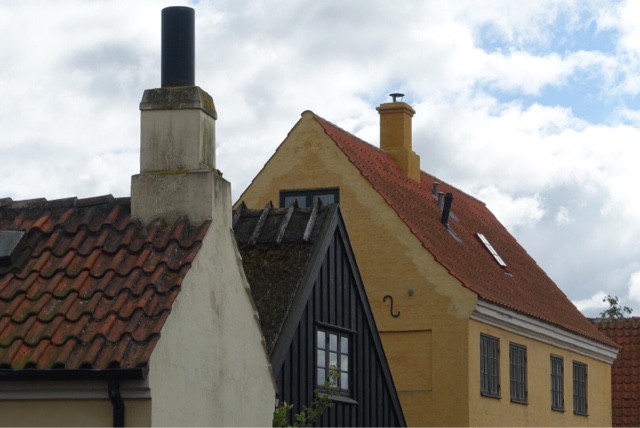 As for the fishing village, that was quite lovely with cobbled "lanes" not big enough for cars only people. And thatched roof cottages all painted alike with hollyhocks spilling into the walkway and late summer roses begging to be sniffed. It was quite memorable even if the weather was rather disagreeable. R said he could hardly imagine living there with nothing to do and all these tourists looking in your windows. Me? I don't know it seemed quite inviting -- the simplicity, the charm, the remoteness and the civility. An appetizing mix if you ask me. 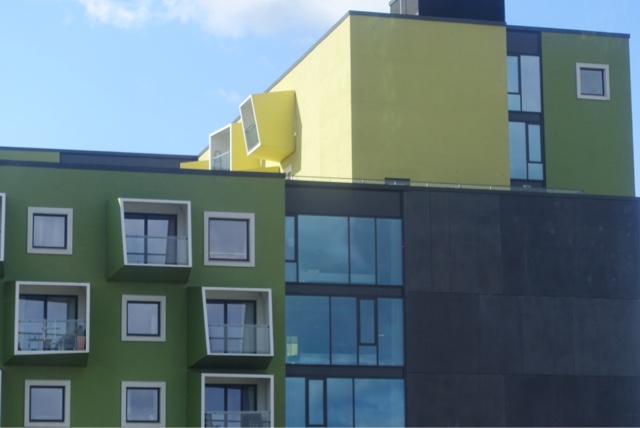 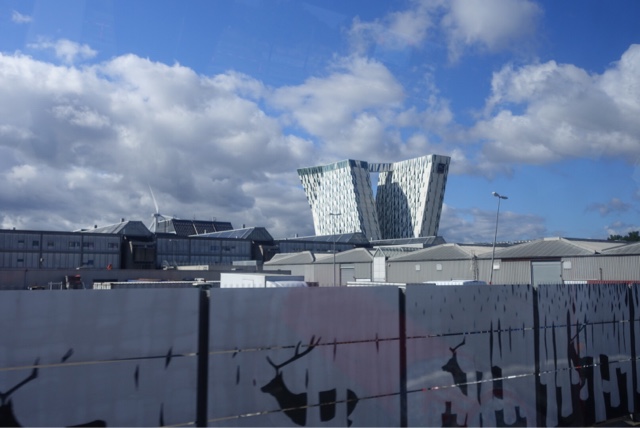 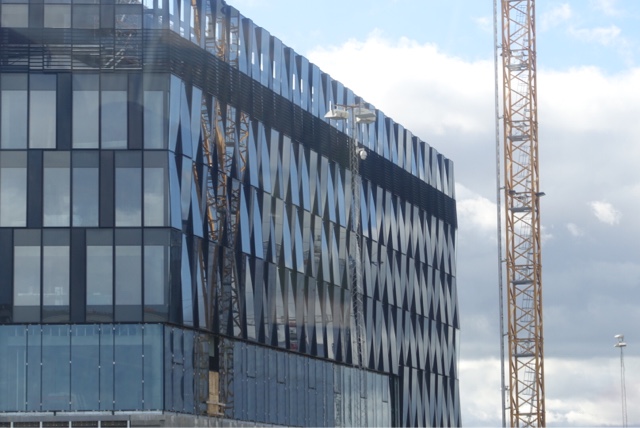 Today we did a tour entitled "The Castles of North Zealand" (that's North Zealand NOT New Zealand). Again we started with a ride through the city but this time we got fairly quickly into an area of horse farms and thatched roofs. The thatched roofs are apparently something of a status symbol here as they are expensive to install and to insure (though they last a long time too). Our first palace was Christiansborg Slot which literally translates as Christian's castle palace -- nothing like doubling up on the old noun-age to drive home the point -- "This is a big house!" It was burned down and rebuilt as a museum but honestly that takes little away from its impressiveness. The setting, complete with moats and formal gardens plus numerous towers done with varying degrees of grandeur, give the place a real castle-y feel. The interior is positively bursting at the seams with portrait paintings of royals and nobles and sons and daughters and well, you all know how much I like that! 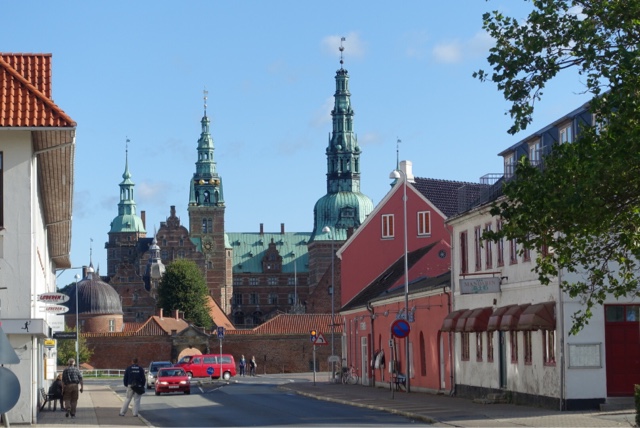 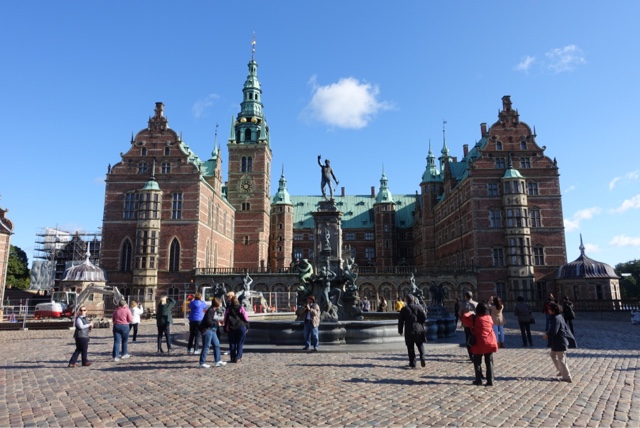 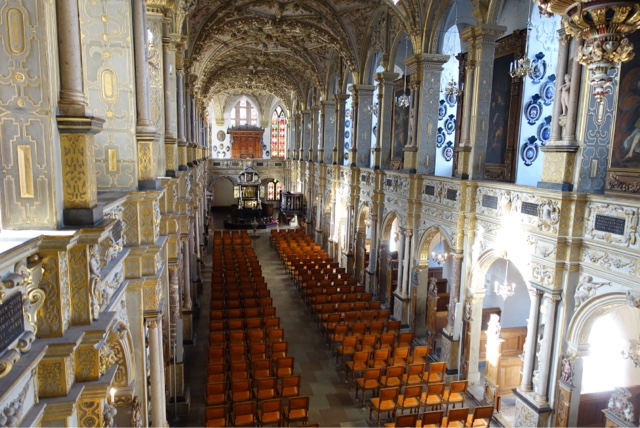 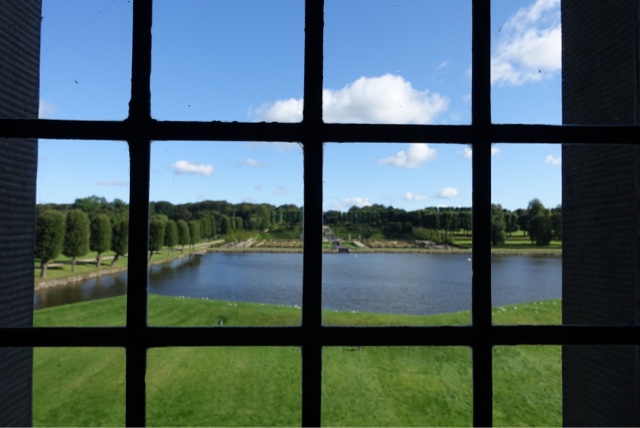 Next stop was a real, live royal palace. The Queen, we were told numerous times, was to be in residence later today (last we heard she was on the royal yacht in Jutland -- she surely does get around). This place was called something very like Fredericksburg but not quite -- Fredensborg Palace. Confusing, I know.
We were only allowed to take photos here and we were kept at a respectful distance by the barely out of his teenage years guard in the big, black, shaggy fur hat that seemed more reminiscent of England than Denmark. 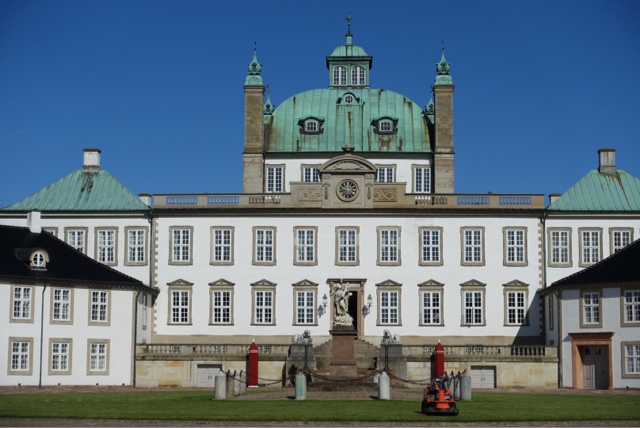 Fredensborg Palace -- fit for a Queen (but it's a "one class" county!)
Next and final stop for the day was Kronborg or Helisinore Castle which is also known as Hamlet's Castle because it was the place where Shakespeare choose to set his play (though he had not, most likely, ever seen or visited it). Shakespeare certainly did this town a big favor though because they have parlayed the whole Hamlet thing into a money machine. Not that it was too touristy but still there were more visitors than, dare I say it, perhaps the place deserved. I liked it though. Located hard by the sea this was primarily a fortress for collecting taxes on the sea-going trade and only secondarily a royal residence. The tax collecting on every vessel that went through here (and you have to go through this area to get to the Baltic Sea) only stopped in 1870 I believe. The fortress is currently rather sparsely furnished but the views of the sea and the main hall as well as the courtyard are all worth seeing. 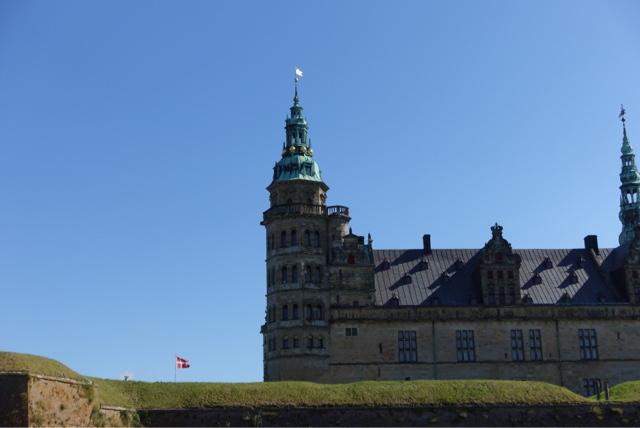 Kronborg AKA Helsinore AKA Hamlet's Castle 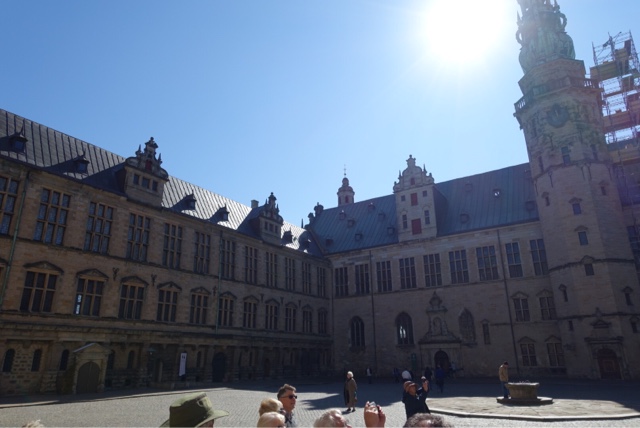 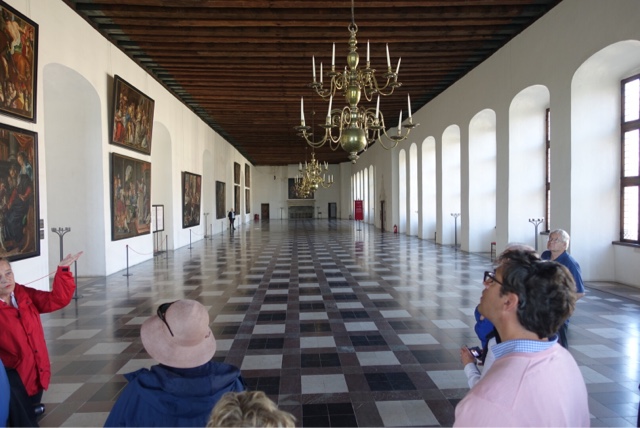 Grand Hall (200 ft long!)
We drove back to the ship via the coastal road and were able to admire all the beautiful residences. Our guide on Sunday said that Denmark was a one class country but don't you believe it. Aside from the obvious Royal class there is also a group (a large group) of people who have more than your average Dane. Some of these houses along the coast  sell for seventy million kronor which is ten million dollars. Still in all, Denmark is a place where you simply don't see desperately poor people. It always amazing to me when I go through areas like the one we drove through this afternoon at the amount of money or wealth there is in the world. And I am not just talking about the houses and the cars but also the roads and the commercial buildings (all of which are owned by somebody). So, what's my point? Well, I suppose it is a.) to recognize how fortunate we in the West are and b.) the importance of the "virtuous cycle" whereby good government and good schools create a citizenry that can make money to support good government and schools. And finally c.) how tenuous all this is. How
far we've come, yes -- but how far we could fall too.
On that happy note, I will wave goodbye to Denmark as we shimmy and shake westward toward Norway, New York and home (in that  order). 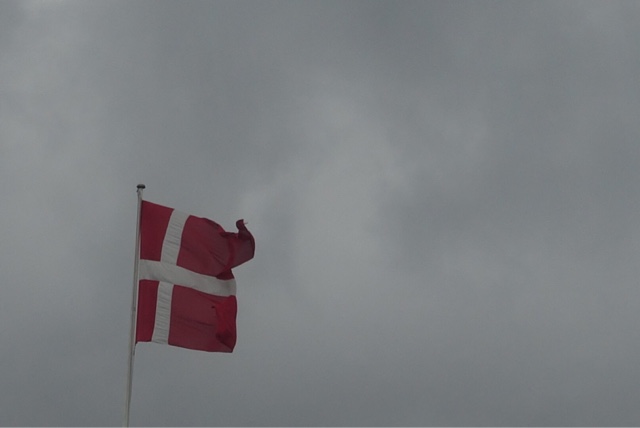