Yesterday, we visited Cologne. Or Koln as the locals call it though I am not quite sure how those two are equivalent--Koln and Cologne-- they don't sound alike to me but whatever. It's a nice place about an hour and twenty minutes away from here via the train. Right next to the train station is the cathedral which of course is the main reason people visit Cologne. It's very big and impressive and gothic. I liked it more than I thought that I would given that I am not usually a big fan of Gothic churches. Too church-y for me. Anyhow this one was interesting because it was finished in the nineteenth century so it still had a bit of well I won't say new but a contemporary vibe about it. Of course that could have just been the stained glass windows designed by Gerhard Richter and installed in 2007. 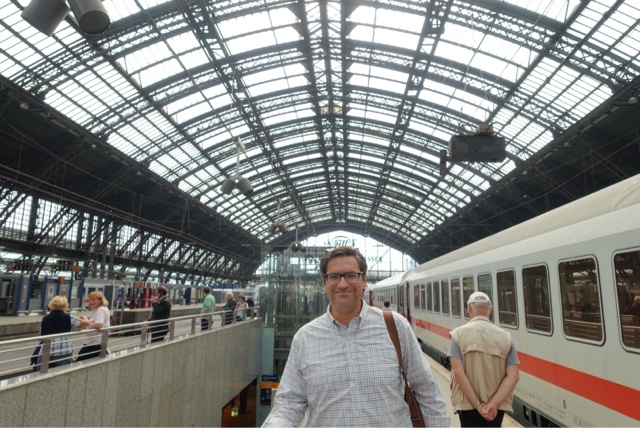 On our way to Cologne 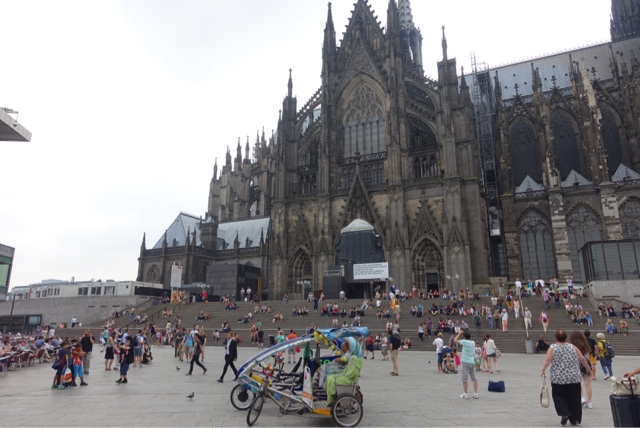 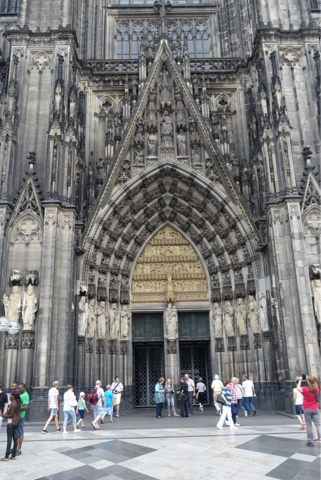 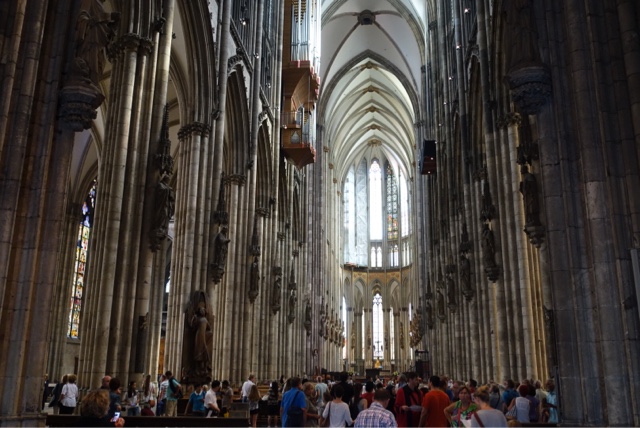 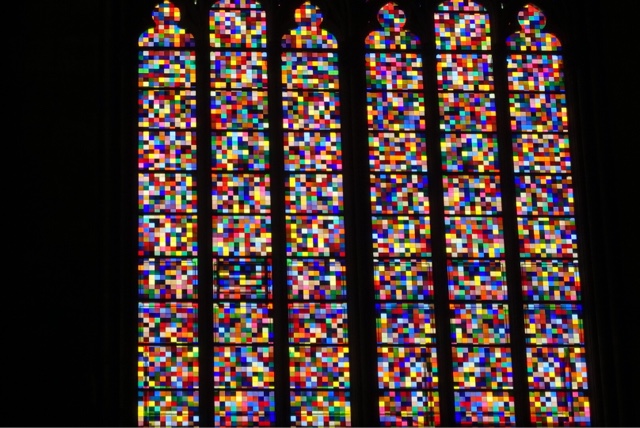 Gerhard Richter stained glass
After the cathedral we took Rick Steves' walking tour and saw some stuff and learned some things. The city of Cologne is mostly new architecture because it was heavily bombed in World War II. Still, there are some interesting sights including the love lock bridge and the diocesan museum built on top of the ruins of a bombed out church. 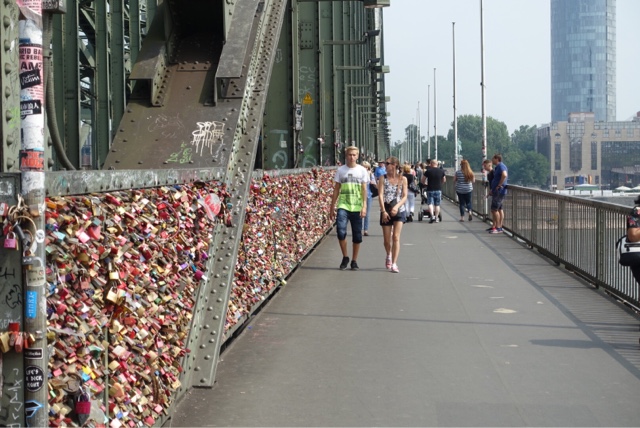 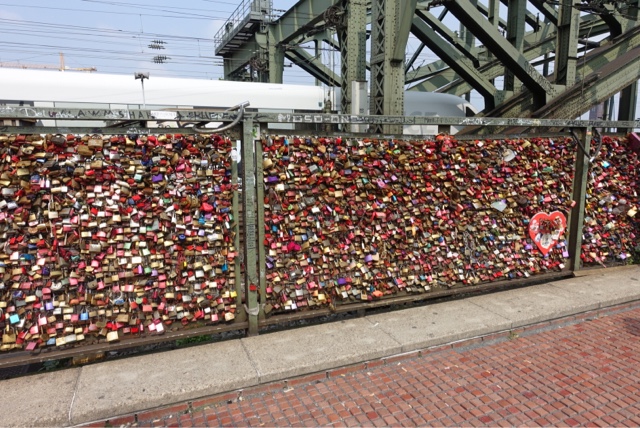 Each couple puts their initials on a lock with the date attach it to the bridge and then throw away the key to symbolize their unending love! No, we did not. 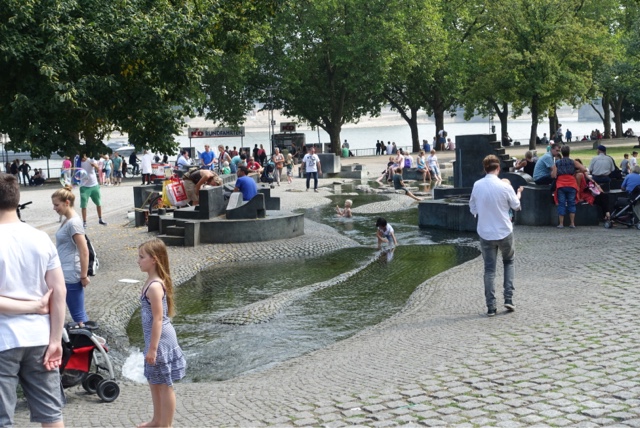 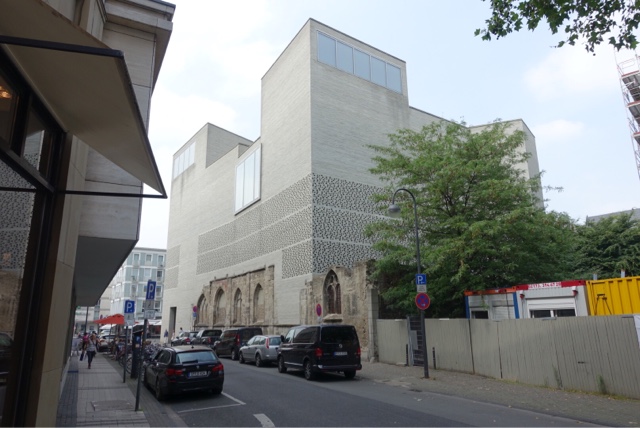 Museum built on top of ruins
Today because it was very hot we decided to take it easy and rest here in the peace and quiet. That was the plan at least. When we arrived here last week we thought this looked like a nice quiet town. Then,  before we unpacked, we were greeted by the sound of fighter jets screaming up the Rhine. "Oh those are just airplanes," our landlady said. Yeah and a pit bull is just a dog! The apartment itself is located on a little side street (off the Main Street) which we soon discovered is very heavily traveled by cars. And pedestrians. At six in the morning. Having conversations. The main street is lovely, you say, all paved with cobblestones. But do you know what car tires on cobblestones sounds like? All day long. Speaking of all day long, we have the town hall bells that go off every fifteen minutes (quarter past = 1 bell, half past = 2 bells, three quarters = 3 bells, on the hour equals four bells plus different bell to signal what hour it is). This starts at six in the morning and goes until ten at night.
Then of course there are the trains. Oh yes the trains, how could I forget those? Two tracks on each side of the river with a minimum of two trains going past every five minutes. As of two days ago, we have our landlords' daughter and son-in-law visiting with their three (count 'em) children (including six-month old twins).
This afternoon we discovered that we are across the street from the town's emergency alarm siren (which went off for two minutes and is positively deafening). Also today our landlords decided to haul some stuff up to their third floor apartment with their handy-dandy, self-made-but-still-motorized-dumb-waiter that sounds like, well you can guess what it sounds like. Of course, it was a nice break from the scraping of chairs and the baby talk that had preceded it. And the piano practice which followed and is, in fact, taking place right now as I write to you. Rrrg. I am not joking! This place is so loud we are going to be relieved when we get to Copenhagen which I have no doubt will be much quieter!
What I am telling you is all true. I mean I like to exaggerate sometimes but not this time. Why the landlady even apologized to us about the noise this afternoon. She said she was terribly sorry about the twins crying last night. The big twin rolled over the little one and the little one didn't like it too much. We, of course, assured her that we hadn't heard a thing! And it was true! I didn't have the heart to tell her that was just about the only thing we haven't heard since we've been here! 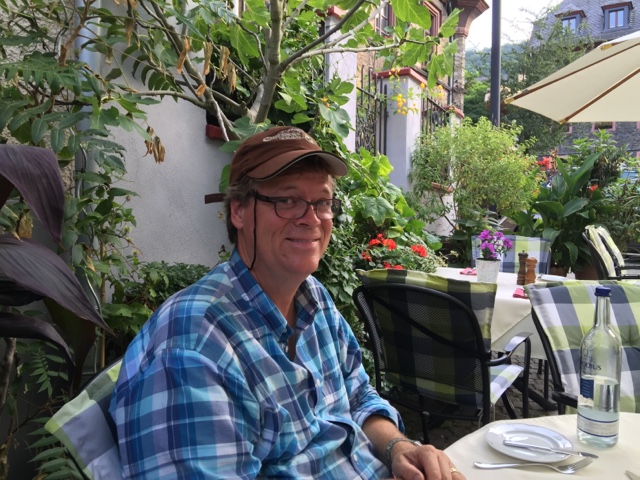 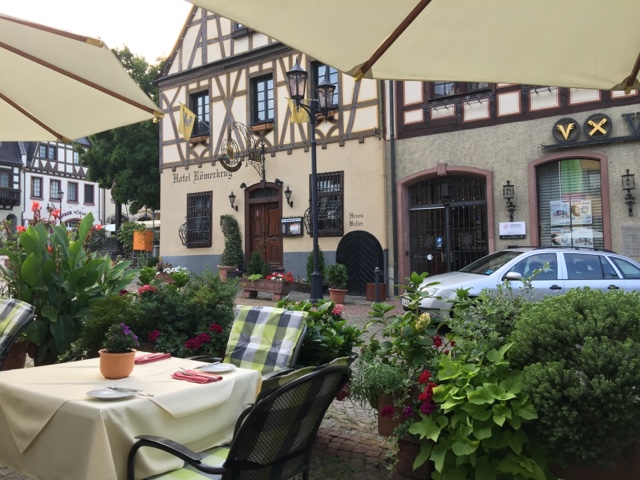 View from dinner table
Posted by Russell at 12:22 PM