A busy two days in St. Petersburg. Marvelous weather: upper sixties/low seventies and sunny. Had a private two-day "Best of the Best" tour (sounds fancy, doesn't it?) from ... wait for it ... Best Tours (that's a lot of bests). Our guide, Helen, was absolutely fantastic. She was accompanied by our driver (Andre) and one other couple from a different ship in port at the same time as ours. The other couple, Margaret and David, were from the U.K.  (n.b. -- whatever you do, don't say they're from "England" because she's Scottish and it's not the same). Anyhow, we all got along well and that made for an especially nice time. 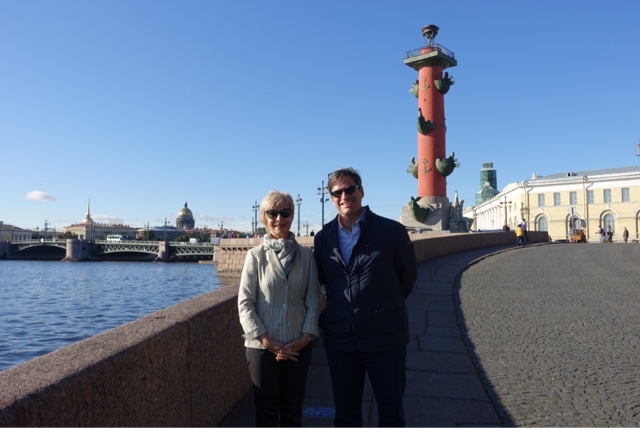 Me and the guide, Helen 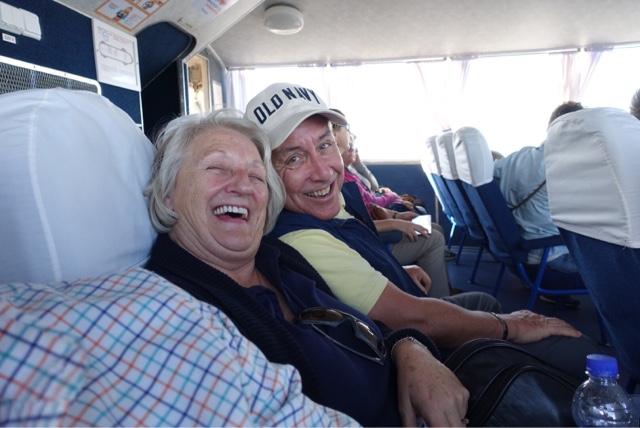 Margaret and David -- a couple who could actually handle us! (Yes I put that "actually" in there just for you David!)
Where to begin? We started on Sunday morning early. After successfully navigating our way through the scowling and very serious Russian immigration authorities we did an early morning drive around St. Petersburg. I was surprised to discover a.) how much water plays a role in the city (it is on a river, consists partially of islands and has loads of bridges and canals) and b.) how (relatively speaking) young the city is (it was founded in 1703, remember I did say "relatively speaking"). 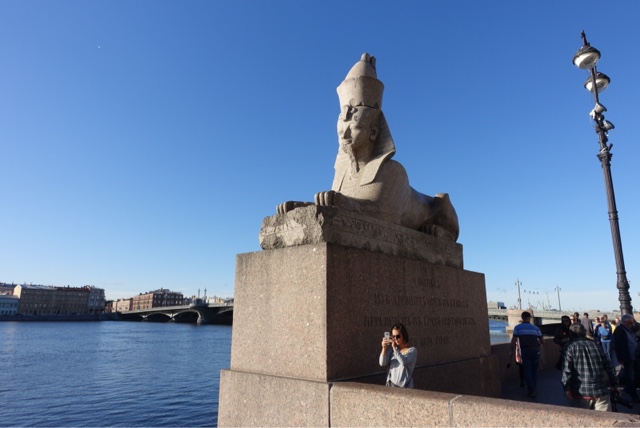 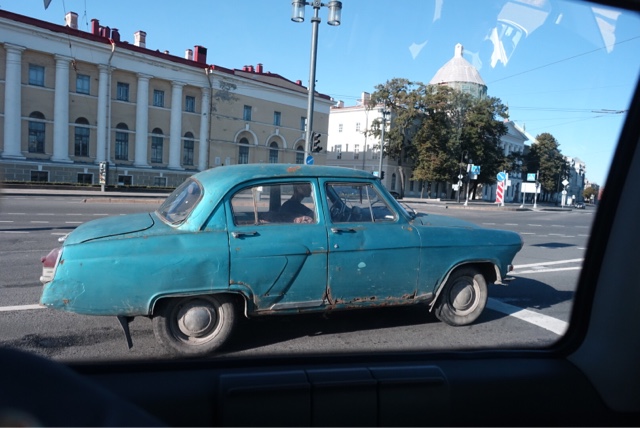 A Volga -- very prestigious car during Soviet era. Not so much now.
The highlight of our morning was the Hermitage Museum which, thankfully and inexplicably, was relatively uncrowded. The museum is located in the former Winter Palace and so therefore the building works in conjunction with the artwork to "shock and awe". The craftsmanship of the decorations was amazing. We made a special effort to visit the Impressionism collection which is housed in a different and very nice, contemporary space. There it was the artwork that was the true star and it was even less crowded than the other parts of the Hermitage. 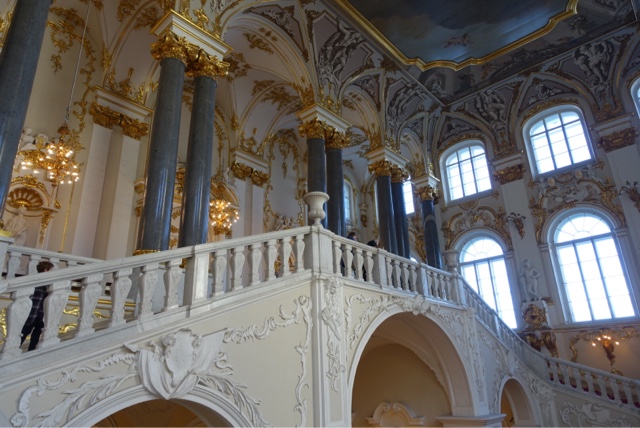 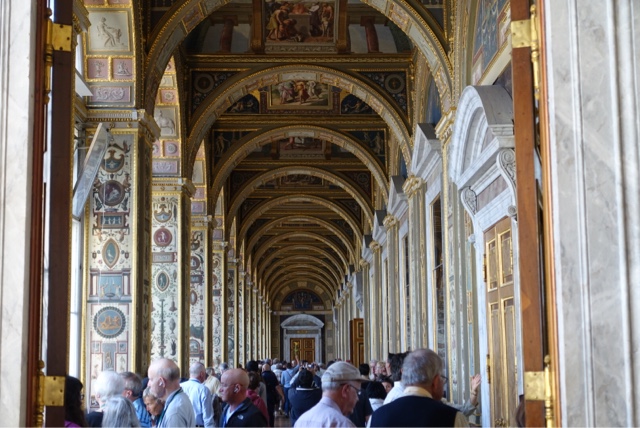 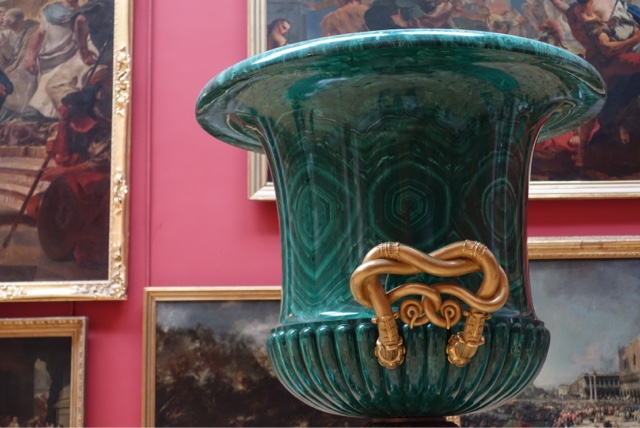 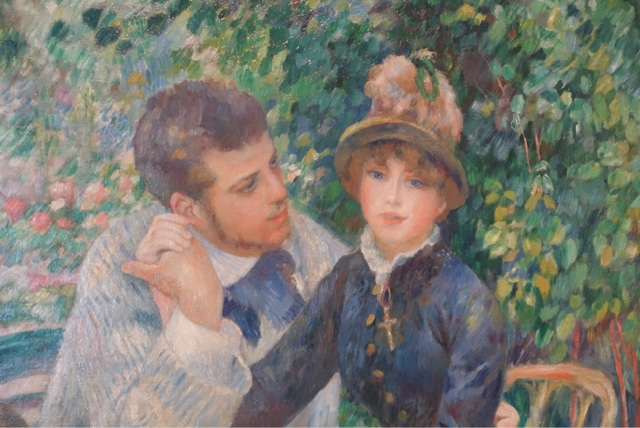 We had Chicken Kiev for lunch and then visited the Church of the Resurrection on the Spilled Blood (a strange name I know and I've probably mucked it all up). The  Church is fantastic. It's not that old but was constructed in a historic Russian style on the site of where the Tsar (Nicholai? Alexei? -- he was definitely "the Second" though, I remember that) was assassinated by terrorists (a bomb) in 188? Inside the building are the most magnificent, abundant and truly awe-inspiring mosaic scenes of the life of Christ. 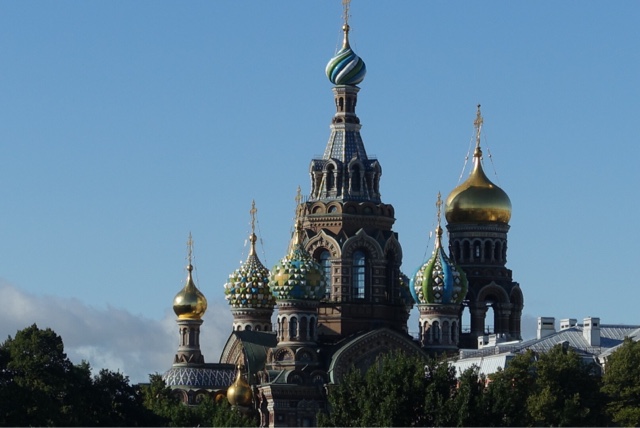 Church of the Resurrection 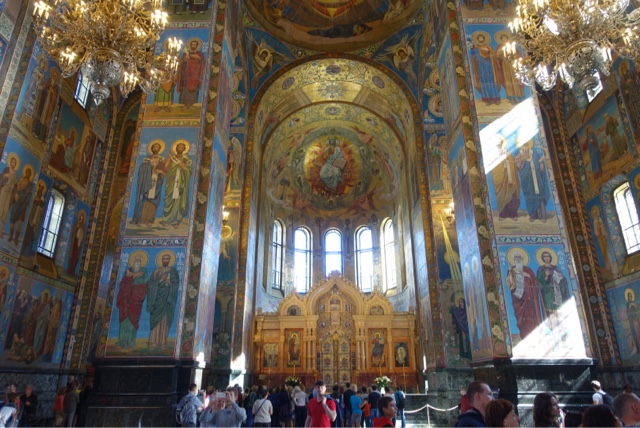 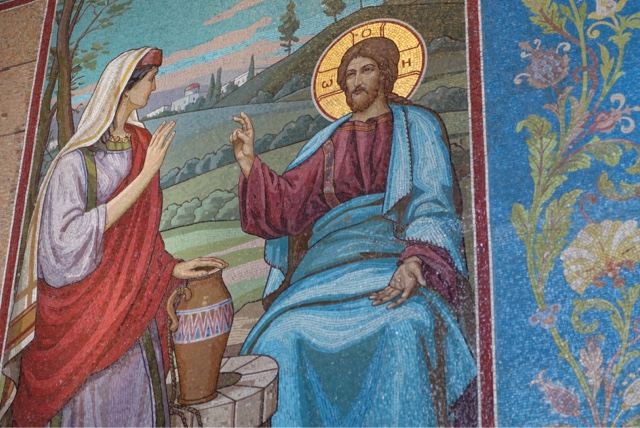 Wedding at Cana
In the afternoon (I know, I know -- I was tired too!) we drove out to Peterhof, which was the Summer Palace of Peter the Great (I think that's right). We did not actually go in the palace itself. Our focus was on the spectacular gardens which were bathed in abundant sunshine and full of tourists and locals alike enjoying the fine late summer weather and the magnificent surroundings. I especially enjoyed the Oak Tree Fountain which featured an area where you could run through the water. There was a guy in a booth that was hidden in the shrubbery and he controlled whether individuals got wet or not. Of course most of the children had no idea that he existed and so it was great fun. 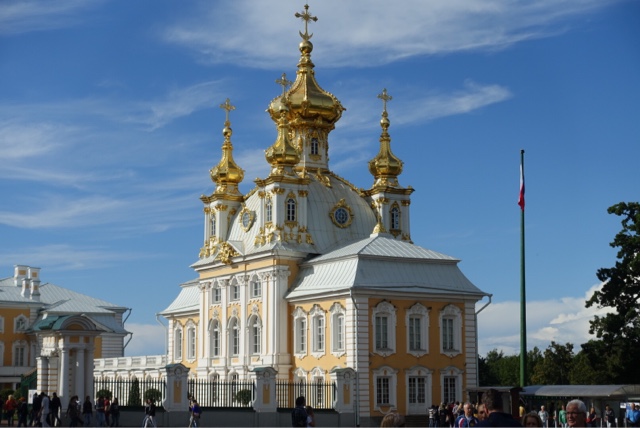 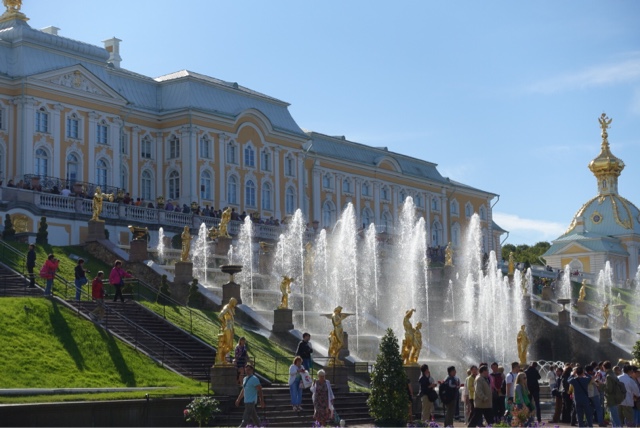 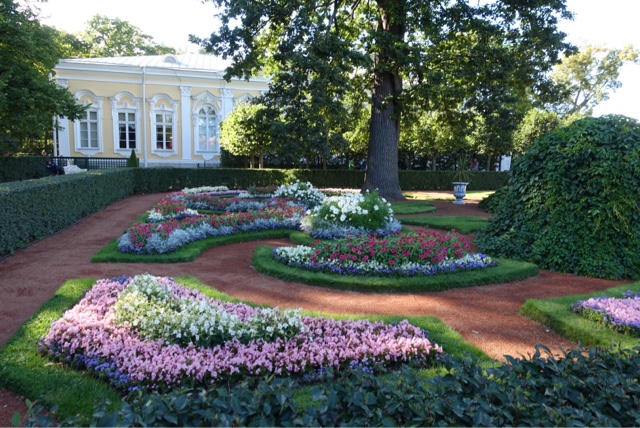 Monplaisir garden
We did go inside "Monplaisir" which was Peter's favorite palace (his "man cave" if you will). It was right on the Gulf of Finland which is where we boarded a hydrofoil for the thirty-five minute ride back to St. Petersburg. Before the hydrofoil got started we were forced to sit through a sales presentation by this Russian woman and she went on and on and on about her DVD's for sale and her books and playing cards and fans and umbrellas and, and, and. Oh my goodness, it was funny! I can still hear her droning on in Russian. I am telling you Billy May (the Oxyclean infomercial guy) has got nothing on her! 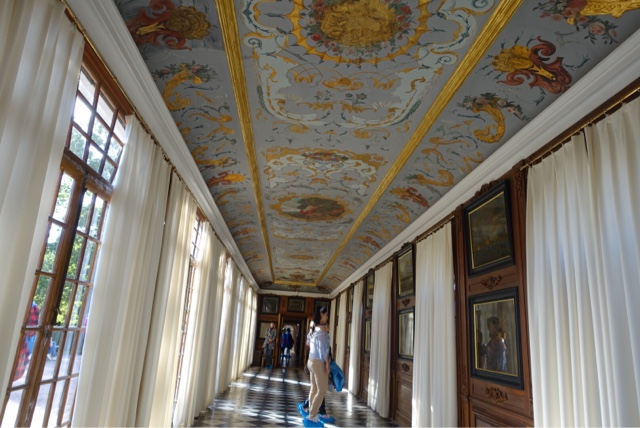 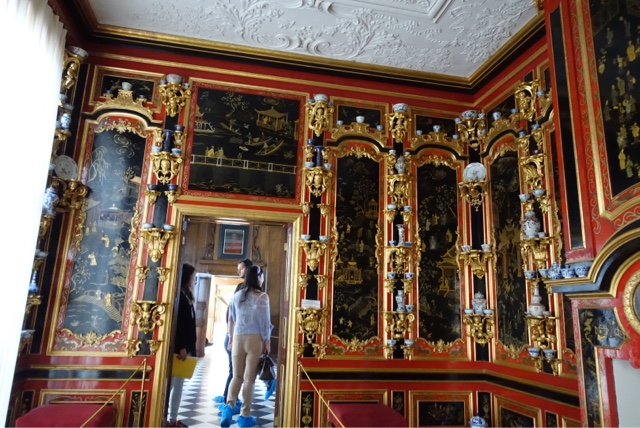 Photos of Monplaisir-- you can always tell when photos aren't allowed because the angle is all cockeyed.
Today was another early day. Up and out at 8:00 am. Still no smile or greeting from the immigration agent. We drove around, stopping here and there to take photographs or better appreciate a view. Obviously there was more traffic and people about since it was a Monday. Visited St. Nicholas Church. Different because it was a two-story church with commoners worshipping on ground level and aristocrats on floor one as they say here but really the second floor to us. Which reminds me of the elevator in the new Impressionism and Post-Impressionism exhibit space at the Hermitage where a sign in the elevator says "For floor three, press two. For floor four, press three." Too funny. 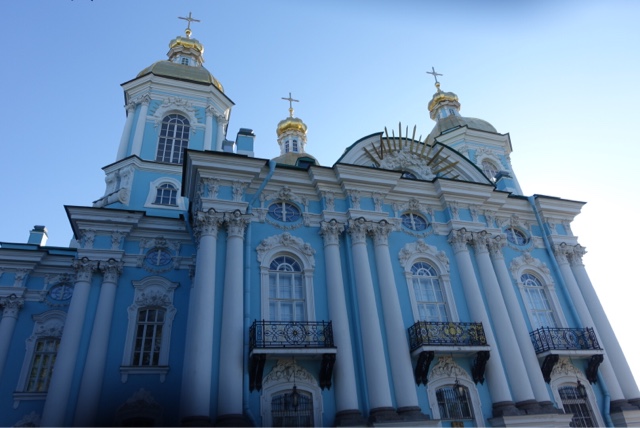 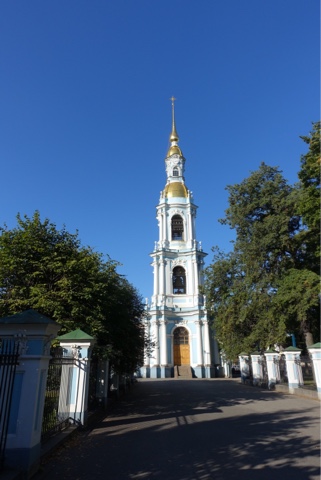 Interior, St. Nicholas Church
Anyhow, St. Nicholas Church was impressive. Afterwards we drove into the suburbs again (think very large blocks of apartment buildings) to see Catharine's Palace. First stop was however lunch which consisted of a tasty mushroom soup with parsley, dill and sour cream followed by mini-ravioli type things filled with beef (a local specialty whose name I am forgetting) and for dessert some superb crepes with apple butter. And, to top it all off, we even managed to speak of both politics and religion without coming to blows. 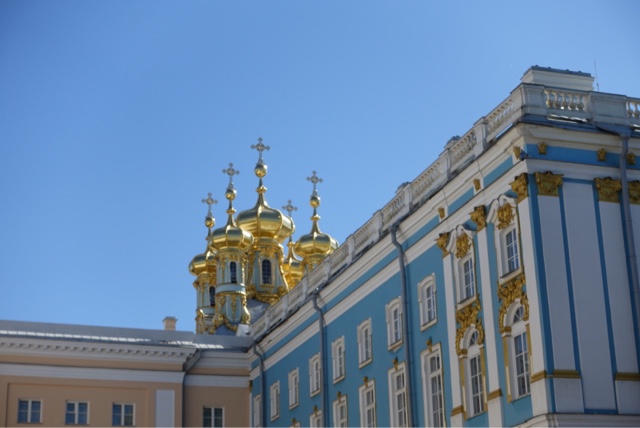 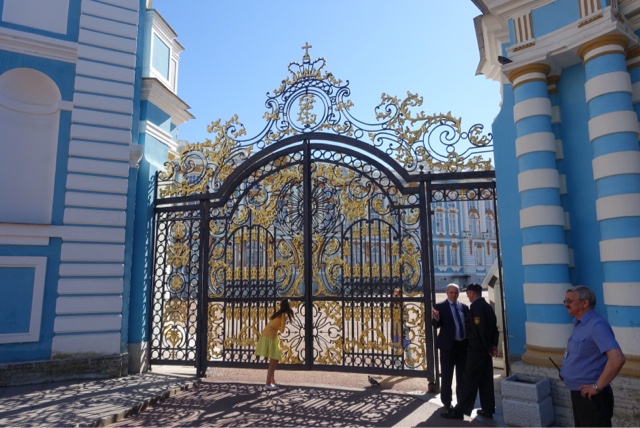 On to Catharine's Palace. To say that this place is large would be a gross understatement. It is positively massive. Completely destroyed by the Nazis it has been beautifully restored. The highlight is the Amber Room where unsurprisingly all the walls are covered in pieces of amber. We tried to take photos from just outside the room because you are not allowed to take photos inside the room but we were stopped by a very serious guard. Apparently you are not allowed to take photos from that close outside the room either because we were moved back eighteen inches and then told that from here it would be okay to take a photo. Just one example of how, in my albeit very limited experience, it seems some Russians like to give people a hard time. For instance, when we were leaving the port area this morning the twenty-something security guard insisted that our tour guide roll down her window and show him her passport which he then proceeded to not even look at before waving us through. What was the point of that? And what exactly is the point of allowing photos in the whole palace but not in the Amber Room? It's a mystery I guess. 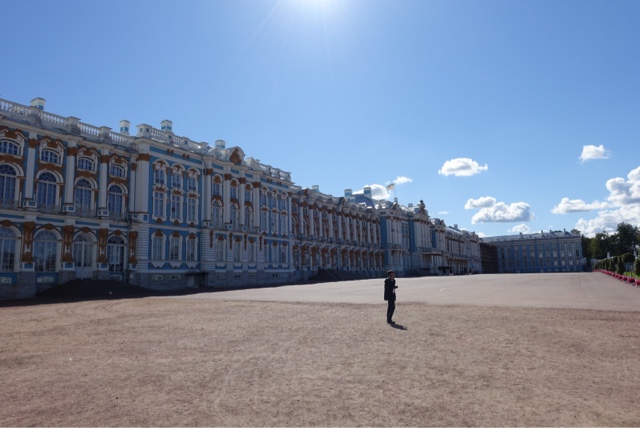 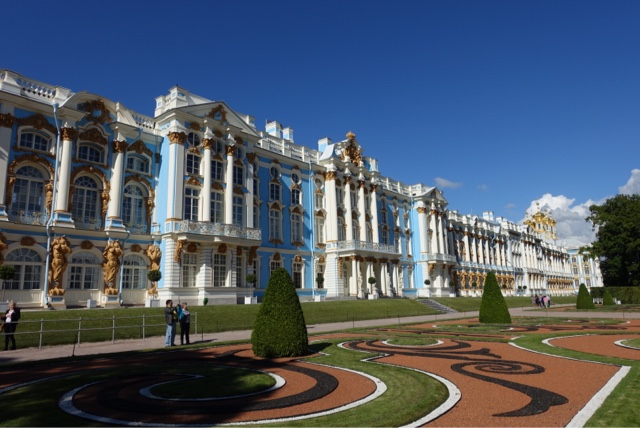 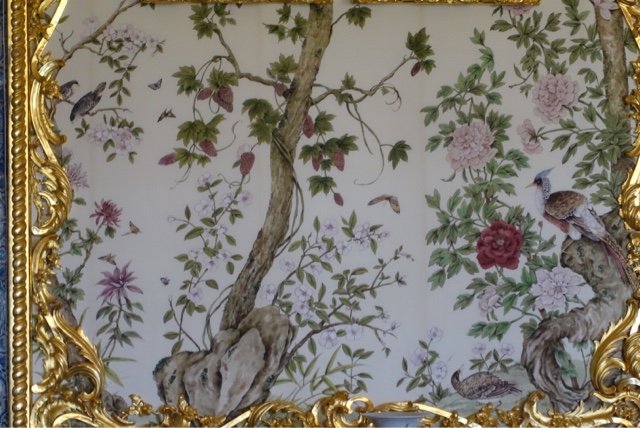 Hand painted with watercolors on silk
The craftsmanship on display in Catharine's Palace is -- like at the Winter Palace and the Church of the Resurrection -- spectacularly impressive and not something I, to be honest, expected to find in Russia. I know that doesn't sound good but it's true. I was also very impressed by the subway system which, I forgot to mention, we rode in the morning  (extremely clean) and by the supermarket which we also visited this morning. It included grape tomatoes, Heinz ketchup and Chilean wine to name just a few items but no buffalo mozzarella or Diet Coke (don't ask me why I was looking for buffalo mozzarella or why I remember seeing those other items). 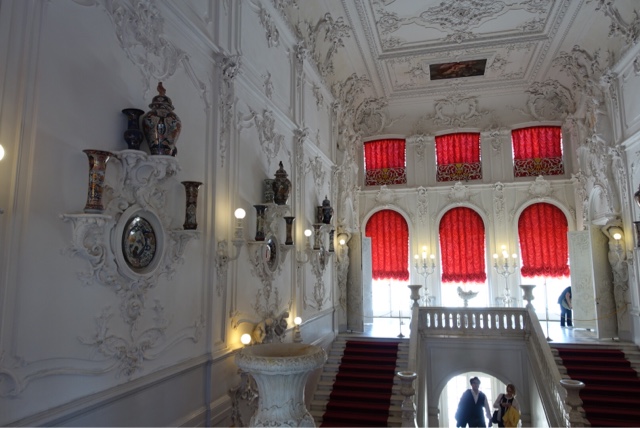 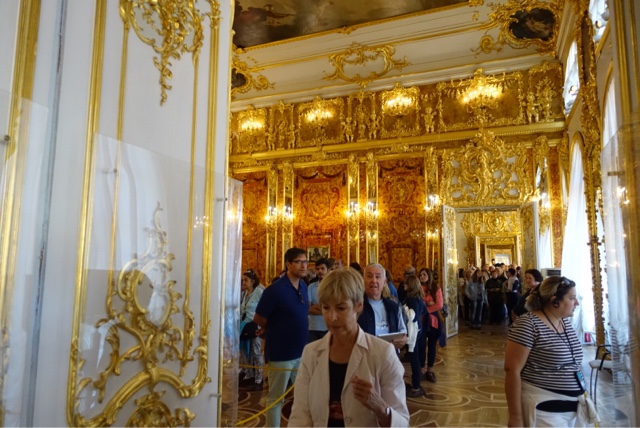 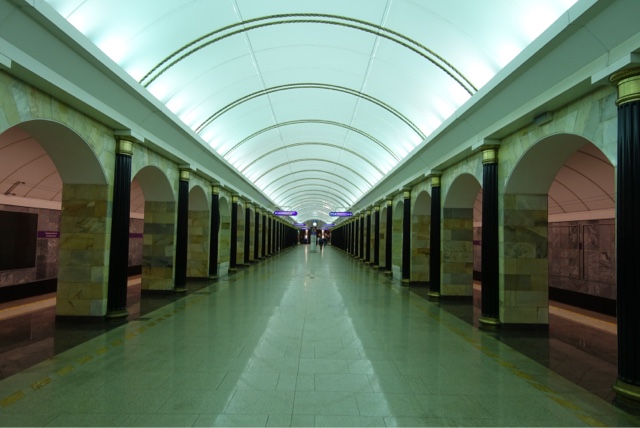 Subway
I digress. After Catharine's Palace we returned to the city just in time to catch our three o'clock boat tour of the canals and the Neva River. Honestly I was ready to forego this experience but I am glad that we didn't because it did provide us with a different perspective and one last chance to experience St. Petersburg. 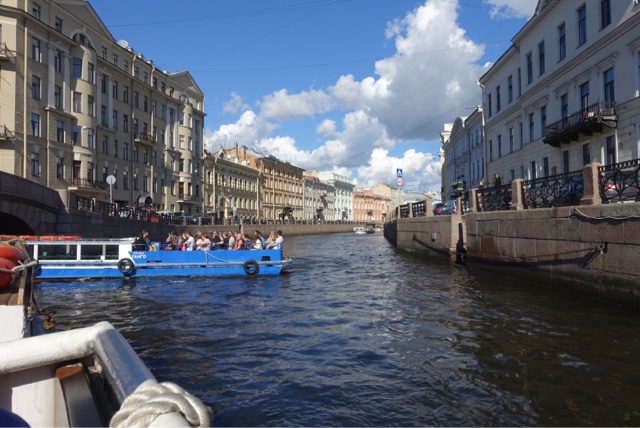 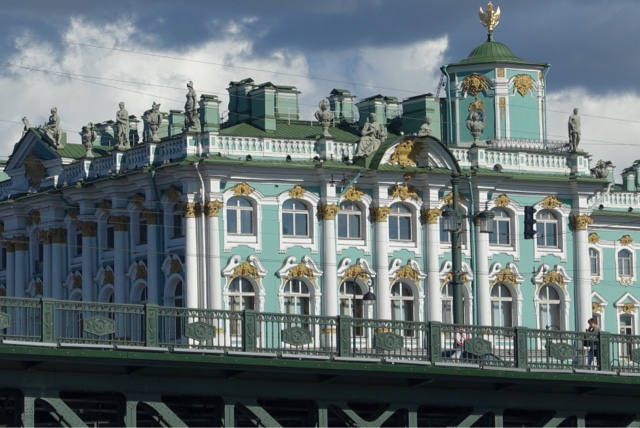 Winter palace
Back in the room now and getting ready for dinner in a few minutes. Rhubarb crisp for dessert (they provide you with the menu in advance). Then off to bed -- early. Sorry to go on for so long. As I think I said once before, I am too tired to make it brief. 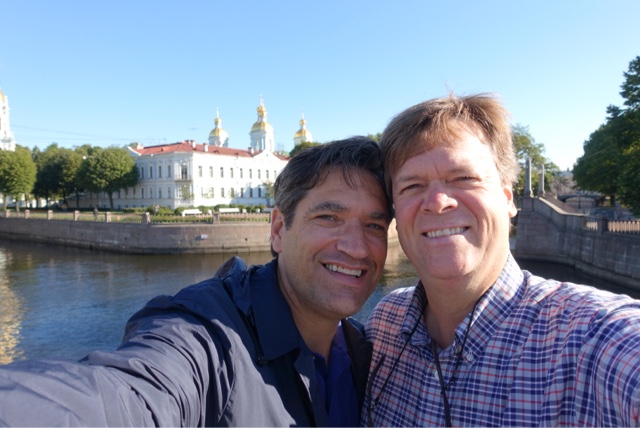 Great pics Russell!
Posted by Russell at 8:47 AM