Today we visited the North Island of New Zealand. We woke up to a mostly overcast sky but our view of the surrounding landscape was quite special. One never knows what will be outside our window every morning. 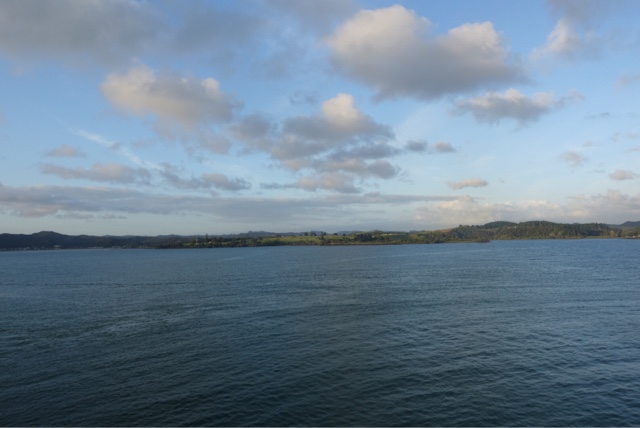 From our veranda this morning 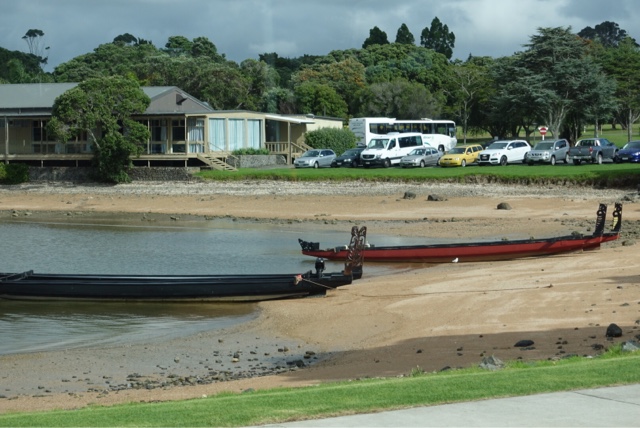 Double hulled canoes
After breakfast we tendered ashore and began our “Maori Culture” tour. First stop was a historic site that featured the two oldest English structures in New Zealand. Immediately I was struck by how different everything seemed. The air was abuzz with cicadas humming and birds calling. The humid but mild air prompted me to remember that it is summer in this part of the world. I don’t know how to describe the feeling that I had. Objectively the weather was not a whole lot different from what we experienced in Polynesia and after but nevertheless it seemed quite different to me. Flowers were, of course, blooming everywhere we went during the day. Indeed, the flora was quite remarkable – big fat palms, giant ferns, eucalyptus trees and more. 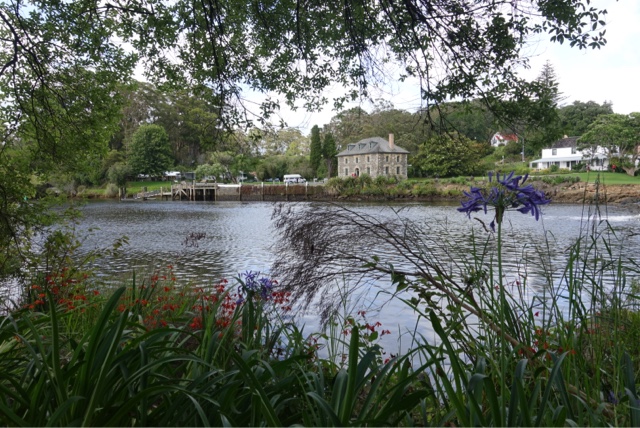 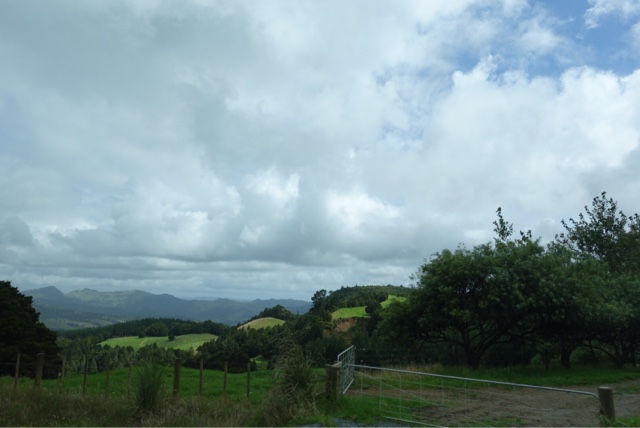 Beautiful countryside
After our brief initial stop we spent a longer period of time at our second stop: a circular walk through an ancient Kauri tree forest. This type of forest and tree were abundant throughout New Zealand two hundred years ago but the Kauri tree proved very useful in shipbuilding and so there are not a lot of these trees left. We were lucky enough to experience some of them. The forest where these trees thrive is reminiscent of a tropical rain forest. The trees themselves are quite fat and tall with interesting stone-like bark and a very high but open canopy. On the floor of the forest is a huge amount of decaying vegetation. The humidity is intense and tree trunks were covered with moss, lichen, ferns and lots of other mini-plants. Even though there were several buses from the boat visiting the forest at the same time, R and I managed to slip off and experience the place in our own way (meaning no guide/no group). 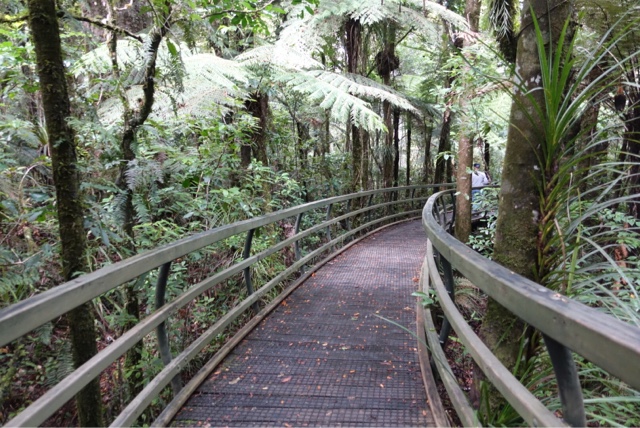 Walk in the woods 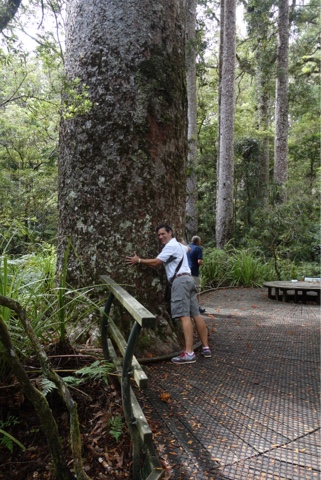 That's a big tree!
Our bus ride to the third stop of the day took us through the New Zealand countryside. It consists of rolling hills punctuated by stately trees and clusters of greenery. Actually the landscape was very green which according to our driver is not characteristic of this time of year. Normally the landscape would be a lot browner in color he said. We also saw lots of happy cows and sheep. The houses were mostly modest (single story with a hipped roofs of galvanized metal) but there was still a general air of prosperity and peacefulness. 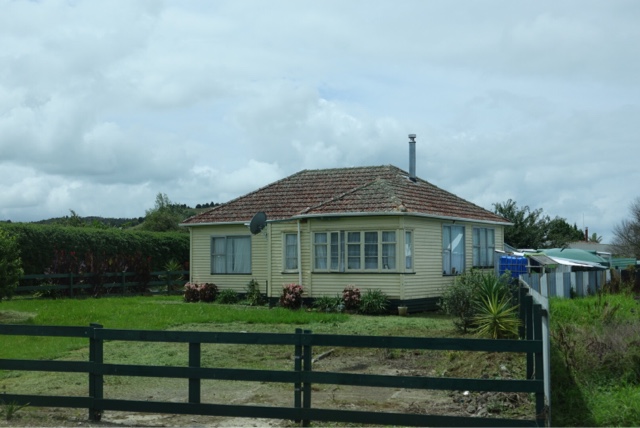 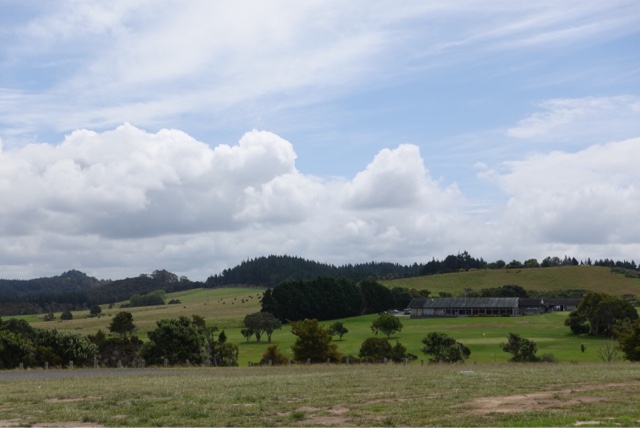 The Maori cultural center that we visited was a handsome A-frame structure. We were welcomed with song. The women in our group proceeded into the structure before the men but not before everyone took off their shoes. Once inside we had to “touch noses” with each of the singers and tribal members before taking our seat. This was an interesting experience – bending forward and touching one’s nose to another person’s nose is not something that I have ever done before but I enjoyed it even though I did worry a little bit about germs. However, I certainly felt welcomed. 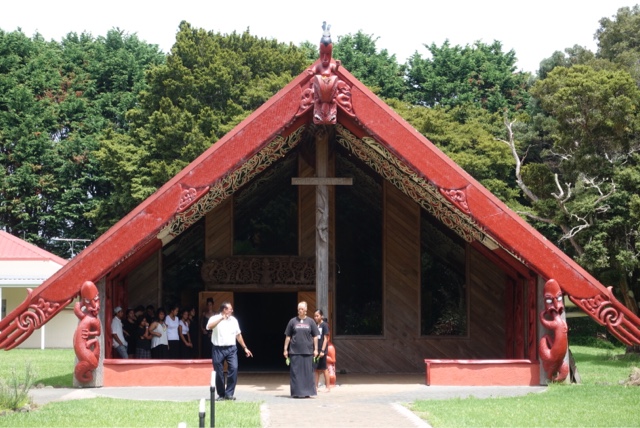 Getting ready to call us to meeting 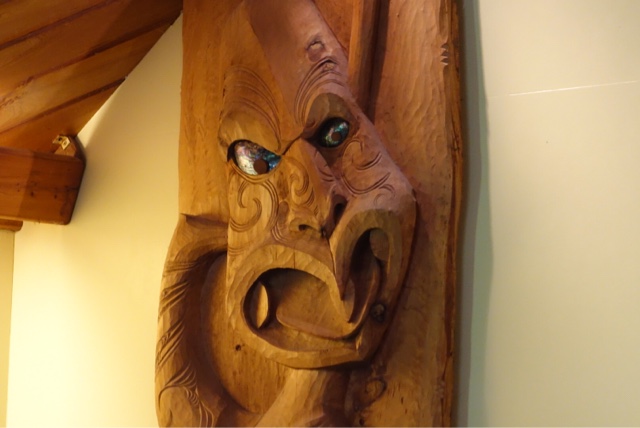 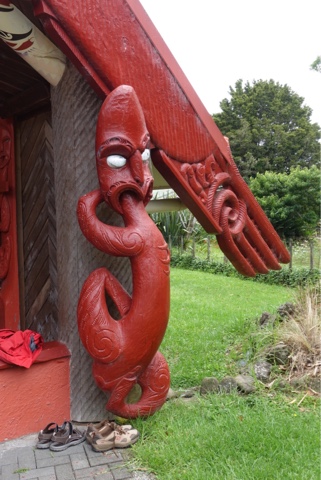 Inside the ceremonial building there were many carvings on the pillars and wall columns. Also the ceiling beams were decoratively painted with abstract designs. The ceremony was essentially a welcome ritual. It consisted of singing, a little dancing, a lot of talking and then some more singing. I found it quite interesting though perhaps too long. The building is supposed to be the place where the Maori remember their ancestors but it is also used for overnight stays (on occasion) and funerals/wakes. The Maori feel that the breath of life resides in the nose and therefore they place a high value on the nose thus explaining the “touching noses” greeting. 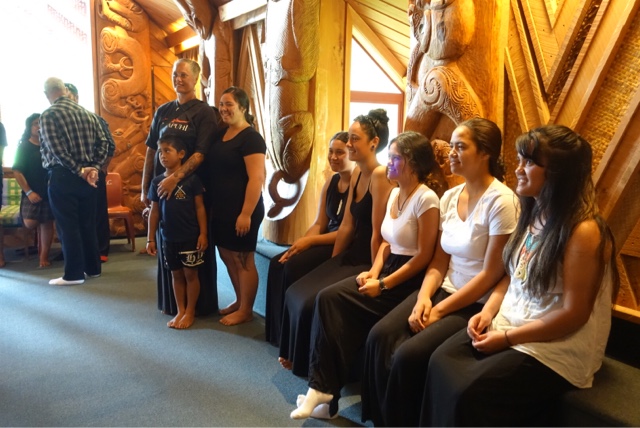 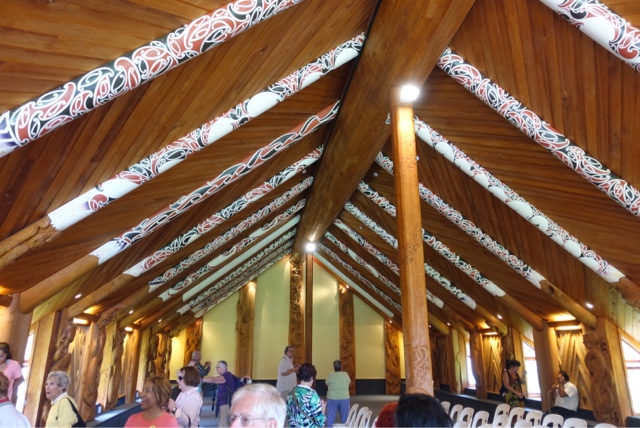 Decorated ceiling beams
After our introduction to Maori culture it was back on the exceedingly squeaky bus for the forty-five minute drive back to the tender pier. Our driver was very pleasant but inordinately fond of breaking and accelerating with vigor which was not so pleasant. We stopped briefly at a mission house where Charles Darwin stayed and also at a golf course with an expansive view over the “Bay of Islands” before returning to the Amsterdam around three forty-five. I quickly changed into my workout clothes and was able to exercise while watching the sailboats on the bay and the scenery glide by as we departed for our next stop -- Auckland. Lovely. 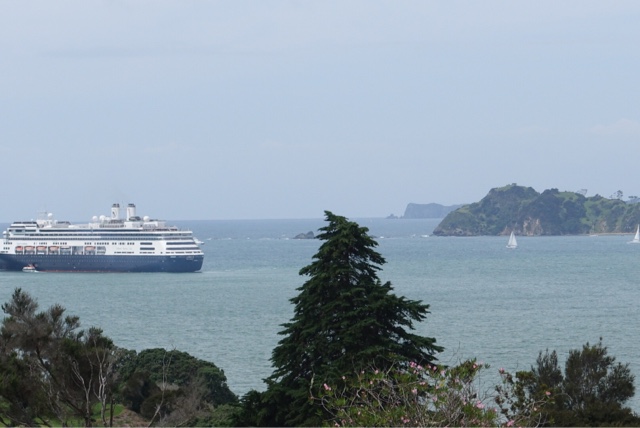 Posted by Russell and Stephen at 1:58 AM