Thursday February 25, 2016
Today we had a very early start -- 5:30 a.m. to be precise. We ordered room service and Russell bought me a coffee so by 6:15 a.m. I was ready to go which was fortunate because that was the meeting time for our tour -- "Borobudur by Coach and Train". Ours was the first tour called so we hit the road running and with a police escort no less! We had been warned about the Indonesian traffic and because this port was a considerable distance from the temple (2 hours) I guess they figured a police escort was worth the expense to insure everything flowed smoothly and on schedule. 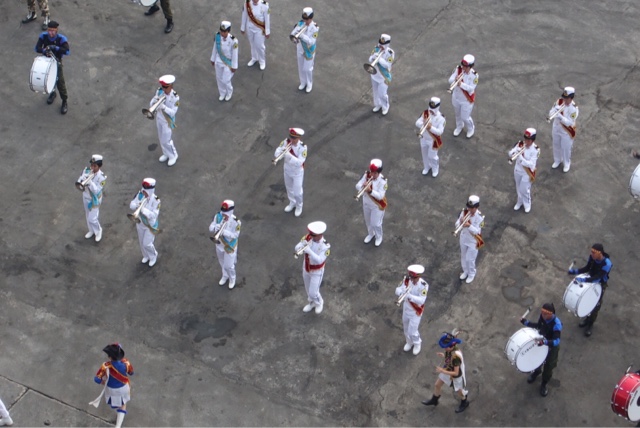 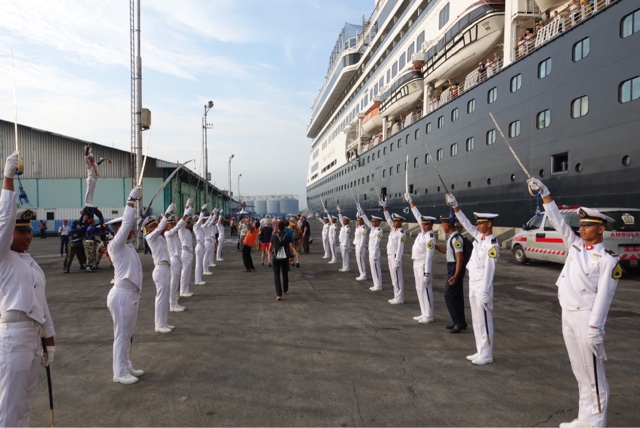 Quite a greeting!
Our first stop was the train. But let me back up first. Getting off the boat was a trip because there was a big high school type band and color guard there to greet us and we walked through two lines of saluting military academy (?) students to get to the buses. This was followed by Indonesian folk dancers in the cruise ship terminal. Too much. Definitely the most enthusiastic welcome we've had on this trip so far. 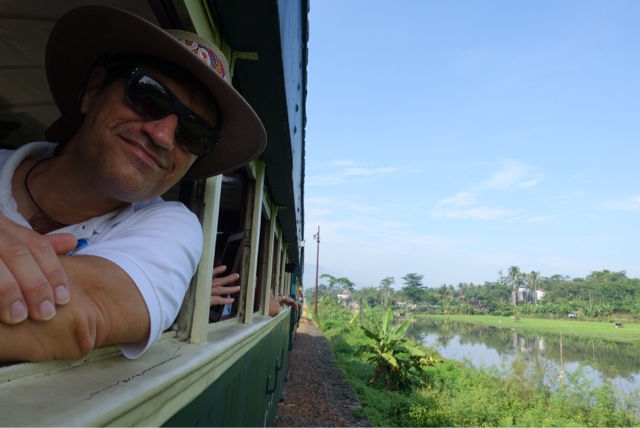 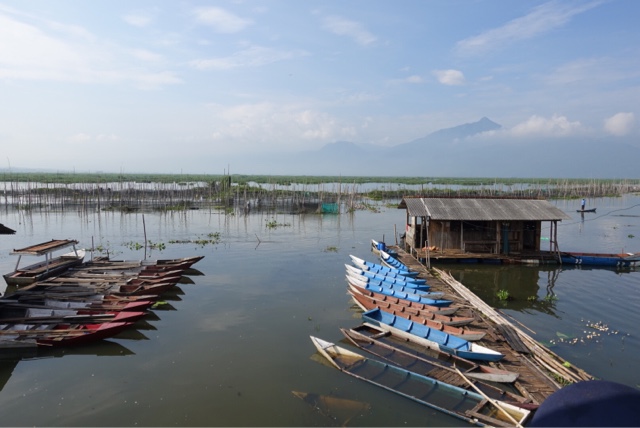 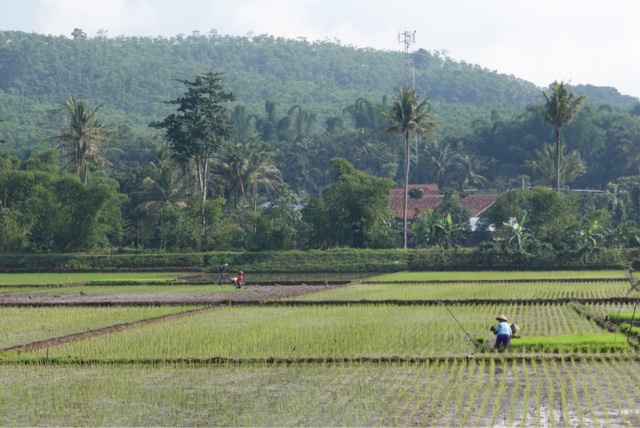 Rice paddy
Back to our first stop. I didn't know what to expect from "Borobudur by coach and train". Would we be taking a train to the temple and a bus back? Perhaps vice versa? Turns out the train ride was really pretty much a gimmick -- 7 km of narrow gauge track in a renovated 1911 3rd class (didn't know there was such thing) coach car. Think bench seats and open windows. Still it was an enjoyable though brief ride through rice fields with mountains in the distance and waving children in the foreground. How else I said to Russell are you going to get in the middle of a rice field without a.) trespassing or b.) getting your feet wet? 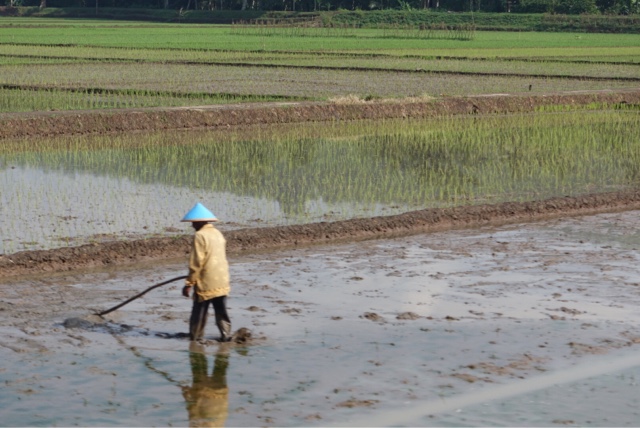 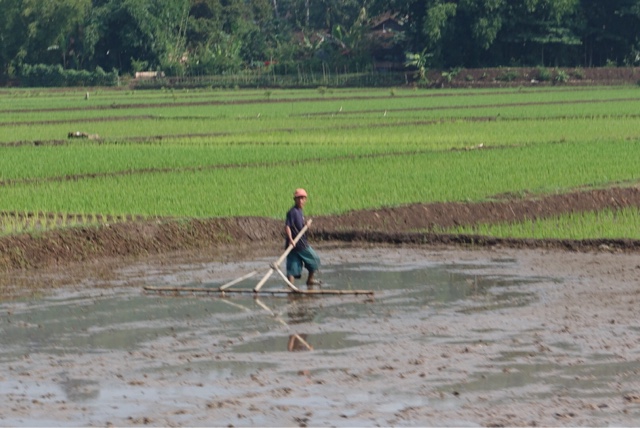 It's hard, dirty work
There was also a train museum but I didn't pay too much attention to that since trains are one subject that holds little appeal for me (though I don't mind riding in them). I preferred the air conditioning in the bus as it was an excessively sticky day. 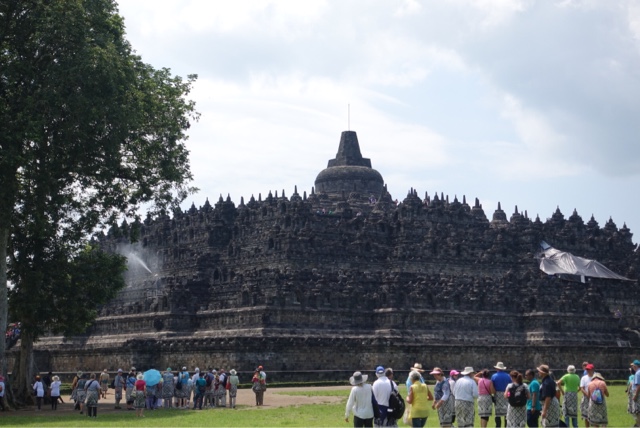 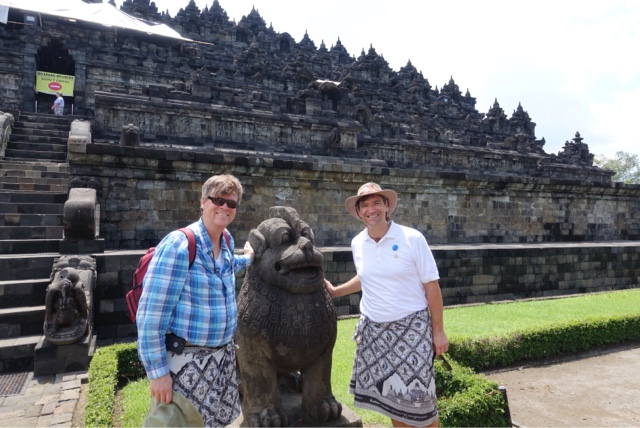 Once again with the sarongs! Never knew knees were so offensive! 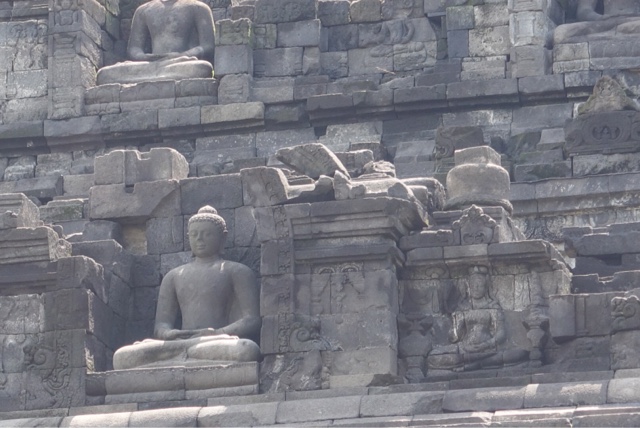 More than one hundred statues of Buddah
We arrived at Borobudur around ten a.m. and talk about sticky! Yikes was it hot and humid there. But what a monument. The largest Buddhist temple in the world we were told. Constructed in the ninth century and including dozens of statues of Buddha. The place was restored in the early eighties but suffered a terrorist attack in the mid eighties. Fortunately not much damage was done. The volcanic (?) stone is carved with scenes from Buddha's life and the top level which is supposed to represent nirvana includes these giant bell jars called stupas. Inside each of the stupas is a statue of Buddha. Most of the statues of Buddha have suffered some sort of damage. The view from the top of the temple is quite spectacular but once again I need to reiterate how hot and uncomfortable it was. Now, you all know me -- I am a sweat-er (as in a person who sweats excessively). So, it goes without saying that I was hot and sweaty but when Russell complains as he did of being drenched in sweat then you know it's bad. 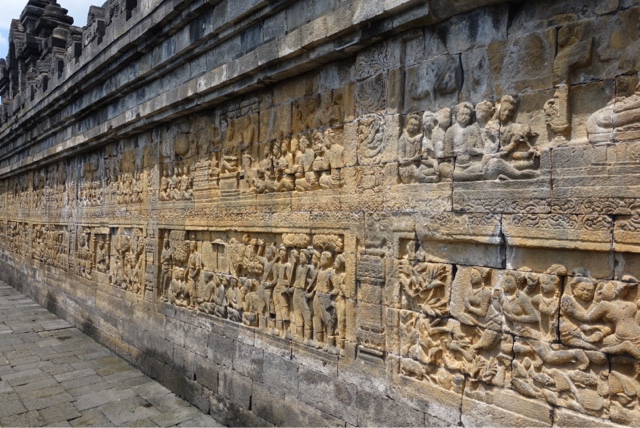 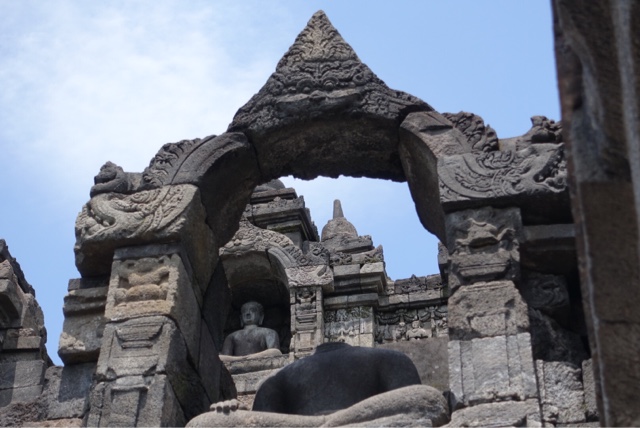 I spy -- another Buddha!
Funny story -- some of the guests from our group were getting highly annoyed with the fact that they could not take a photo of the temple without people in it. Well, duh! I mean people this is a major tourist attraction not to mention a massively large monument to boot. To think you are going to get a photograph without any people is not only idiotic it is also downright deceitful if you ask me. Which no one did. I have to give Russell props here because he saw the whole situation including the part where they were shouting up to people walking around the top of the monument to "get out of the way" and he choose not to say anything. Impressive. I am afraid that I can't say the same for myself as I might have said something about the person "not being the center of the universe" to a fellow member of our group. 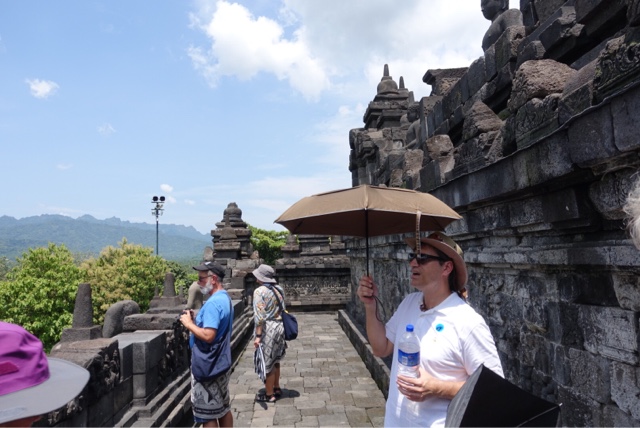 Did I mention it was hot? 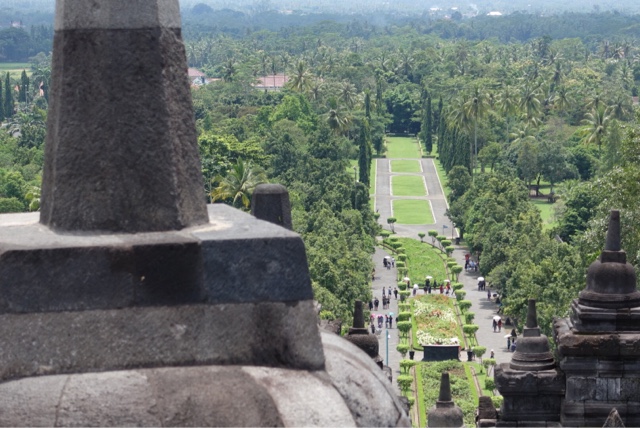 Lunch was at a hotel on the park grounds and it was perfectly adequate. Served outdoors but under a roof and complete with -- what else -- but some  traditional dancers. After lunch we had some time for shopping. Russell had already given me a hard time in Bali because I got hijacked by this women who put a vice grip on my elbow and literally dragged me into her shop after I had mistakenly said "Maybe later"  to her pleading for me to visit her shop on the way into the temple. Well, needless to say, I won't be using that line again because she didn't forget and she hunted me down when I left the temple reminded me that I had "promised" to visit her shop before she placed the aforementioned vice grip on my elbow in order to assist me in fulfilling my "obligation" to her. 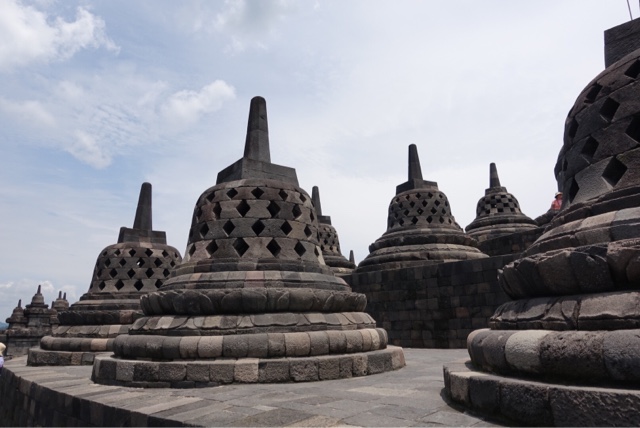 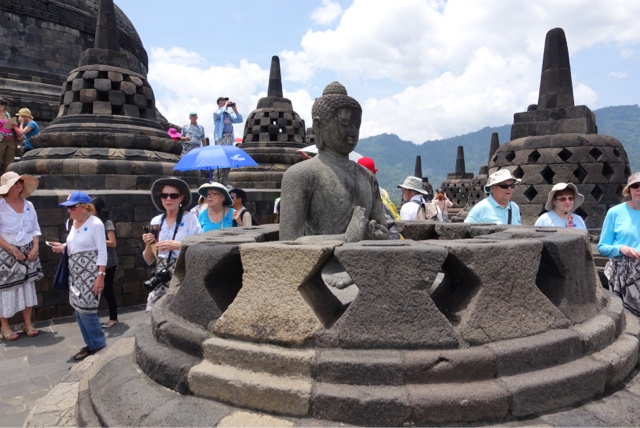 Stupa with its top off exposing the Buddha statue inside
The venders at our luncheon spot were no less aggressive but I didn't mind so much. I bargained with them and got the prices down though I am quite sure that I payed more than some others might have and none of the stuff that I ended up with was particularly desirable to me (or Russell) but I had fun and it didn't cost me a lot. Russell however was appalled at my behavior and said that after all these years he had no idea that I was such a sucker. I am glad I can still surprise him! 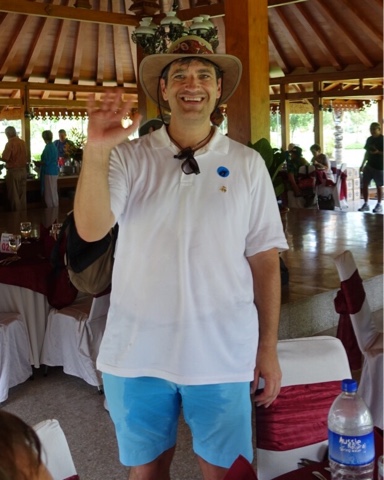 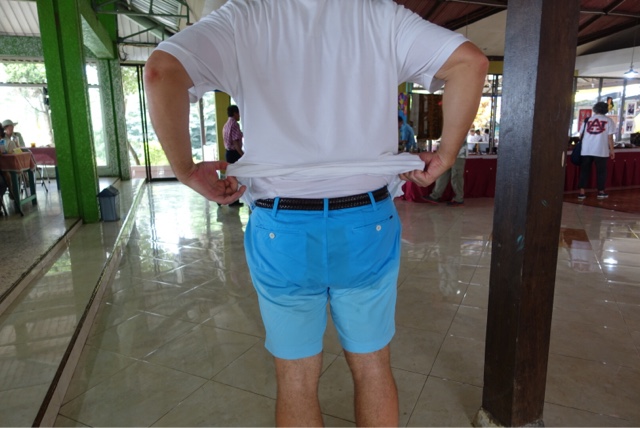 I did mention that it was hot, didn't I?
Speaking of surprises -- our next stop was a "shopping opportunity" -- no surprise there. The real surprise is what we bought -- two silver necklaces. For me! Can you imagine? What was funny is that I was already wearing a necklace -- for the first time in my life, I think. It was just a cheap "tiki" necklace that I had picked up in Polynesia and re-discovered last night while looking for something else. So I thought I would wear it in Indonesia. I mean who do I know here, right? And the weather is hot enough for a tiki necklace or so was my train of convoluted logic. And now here I am the proud owner of two more necklaces. 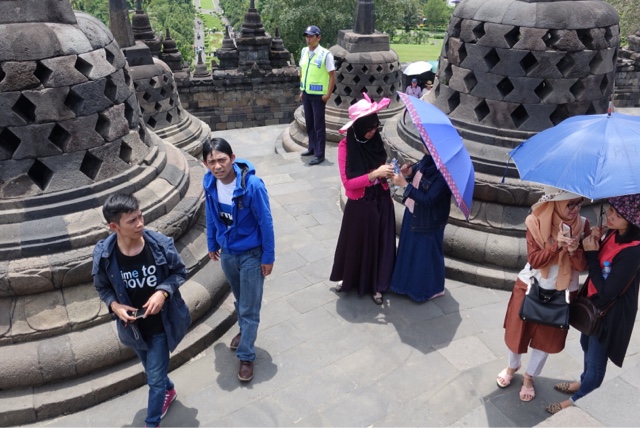 Hey -- you with the umbrella, get out of my picture!
You must understand that I come from a highly phobic background regarding jewelry for men. I can hear my mother's voice saying, "Men don't wear jewelry". Or was it my grandfather? I am not sure which one but it's a truism that I have adhered to until this day. I mean I have a nice watch (that's not jewelry) and I have a nice "wedding" ring (also not jewelry) but a necklace? Definitely jewelry. But hey sometimes I like to get outside my preppy box and loosen up. Or be a "little bit sleazy" as Russell tells me when I wear my Robert Graham shirts with or without my white pants. Not to mention my white shoes, lime sherbet pants or black velvet shirt. And it's true. My taste can vere toward the ... uhm ... unusual. But isn't that what it's all about? I am not saying I am going to wear a necklace from now on (heaven forbid) but isn't it nice to surprise yourself (and others) after fifty one years on this planet?! 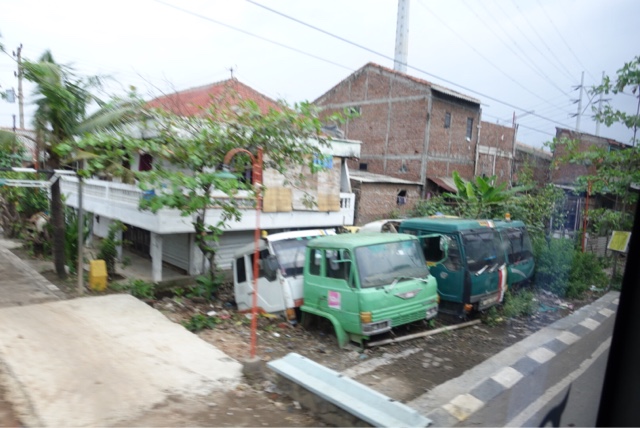 You never know when you might need an extra cab -- or two! 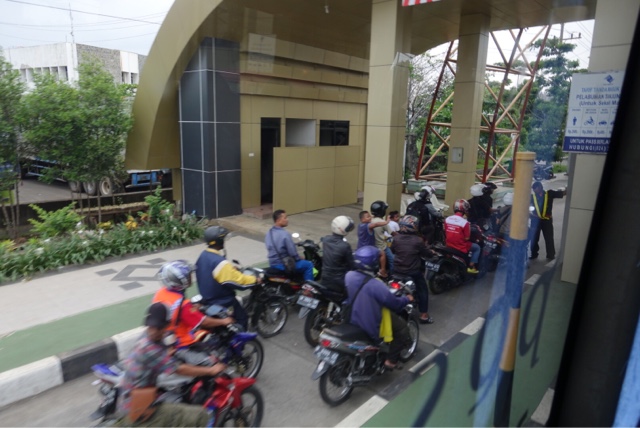 Do you think they are all paying the toll?
Posted by Russell at 7:19 AM