Thursday February 11, 2016
Long day today. It was day two here in Sydney. We had a bus ride to visit the Blue Mountains which are neither blue nor are they mountains but rather a hazy valley. The bus ride took two hours each way and all we really did once we got there was stand at the rim of this albeit beautiful valley/gorge/nature area and take photos, remark on how pretty it was, get jostled by other tourists and roast in the midday sun. I exaggerate, of course. We did have lunch at a picturesque, old-fashioned (read a bit tatty) rim-side hotel and we were treated to a twenty-minute aboriginal show complete with dancing and didgereedoo (spelling?) playing.
Our first stop of the day was an animal refuge which featured birds and other animals from Australia. I found it reminiscent of an impoverished, 1970's era, Florida-style roadside attraction; in a word, depressing. 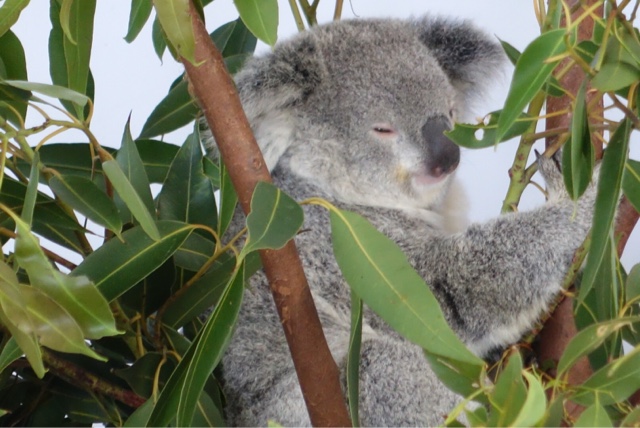 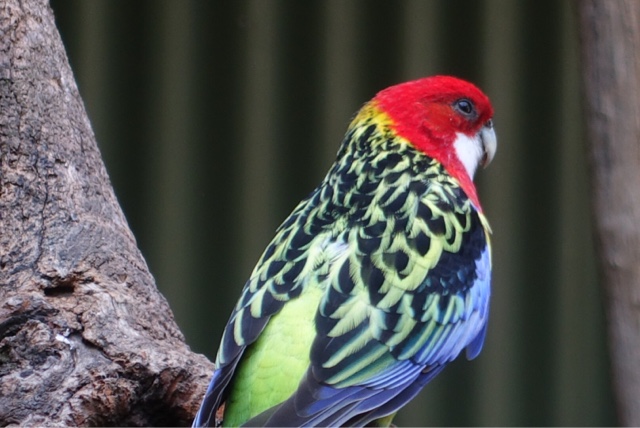 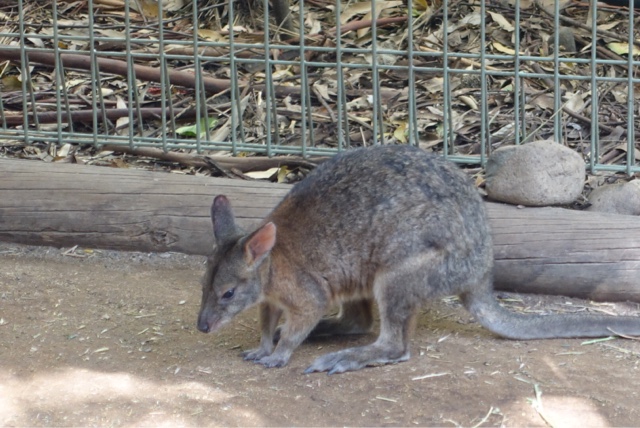 Kangaroo or rodent?
We did however see a lot of iconic animals that we might not otherwise have seen, such as: wombat, Tasmanian devil, koalas (lots), and kangaroos (also lots). The kangaroos were less cute and cuddly and more rodent-like than I had expected especially the wallabies and smaller kangaroos (I think it's those tails that unnerved me). Anyhow, there were also lots of beautiful and very colorful birds but it was a little hard to appreciate them given the grim nature of their confinement. I am sure the place is not as bad as I am making it out to be; everybody else seemed to enjoy it. 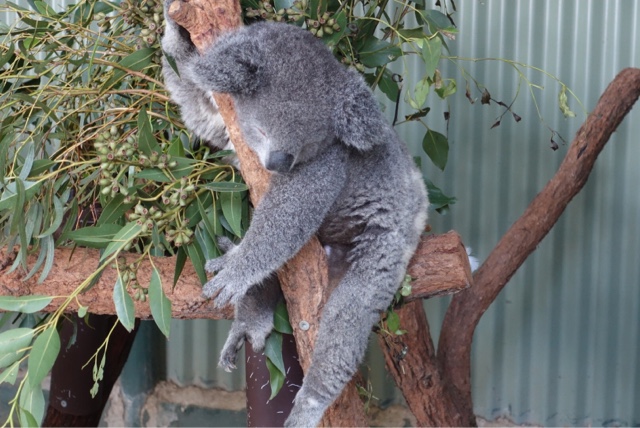 This little guy doesn't want to wake up 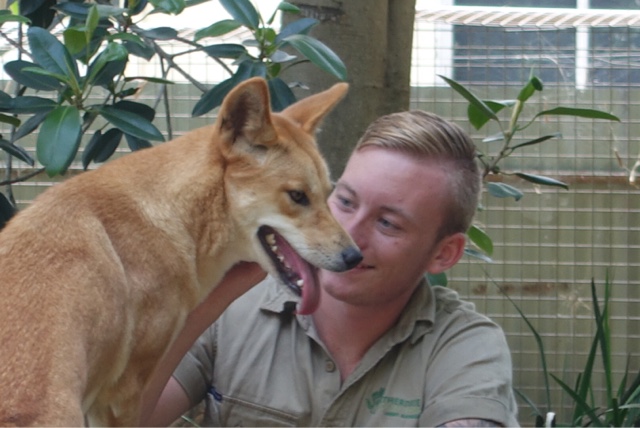 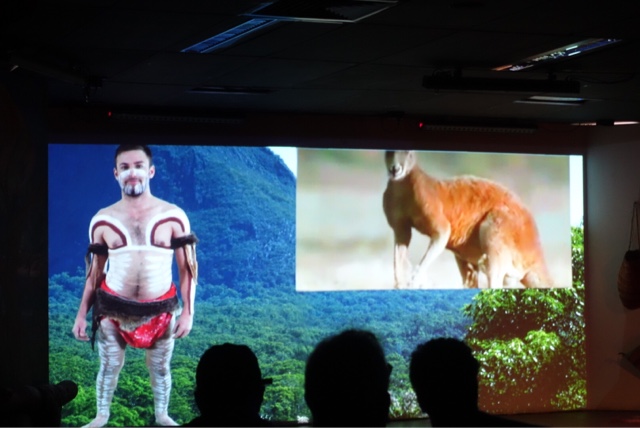 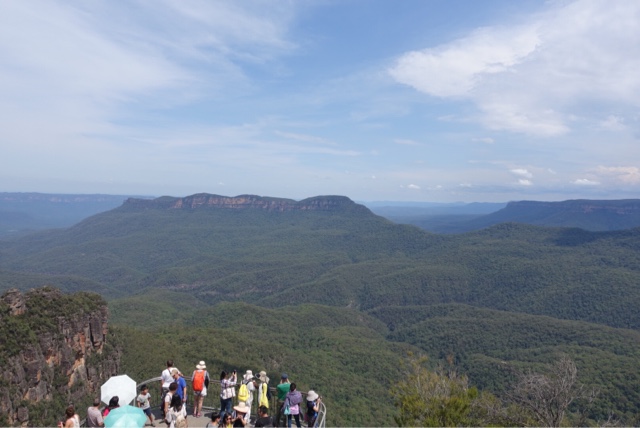 Blue Mountains
Anyhow, all in all, I would say that the excursion was a long way to go for not much. We had a more successful first day in Sydney. The "sail in" was, according to Russell, truly a memorable experience and judging from the terrific photos he took I believe him. Me personally I slept through most of it (he got up before six to see it). After breakfast we took a cab downtown. Unfortunately we were docked rather a long way from the central business district and the traffic in Sydney is pretty bad. After a brief stop at the Apple Store (where there is no public restroom I might add) and a somewhat longer stop at the knitting/needlepoint store (where I bought some more sock yarn) we walked to the Queen Victoria Building -- a shopping center in a beautiful, old but renovated building. I had a brief meltdown owing to a poor sleep and the sensation of being overwhelmed by all the things to see and do in this large, modern, busy and foreign place and also stressed by the briefness of time available to us in which to explore. 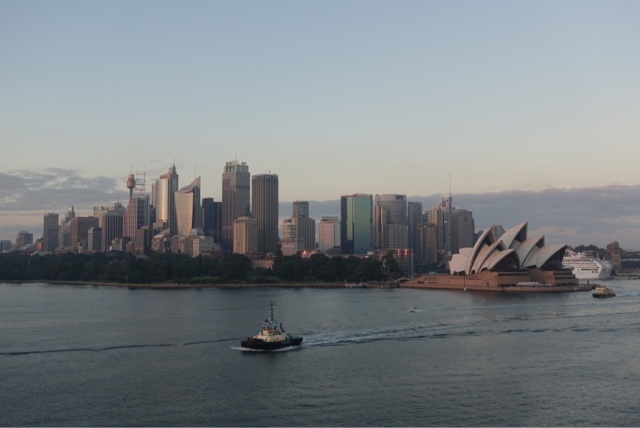 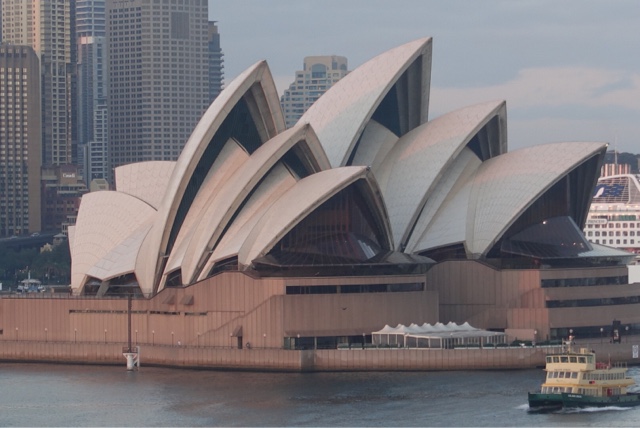 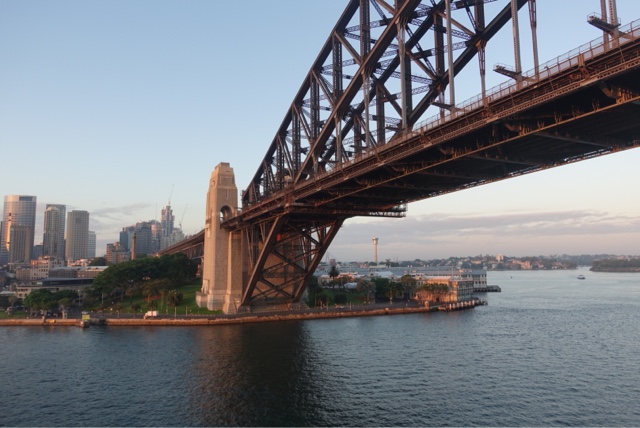 Harbor Bridge
Russell helped me to regain my equilibrium and we headed off in a new direction entirely: to Hyde Park (yes, there is one in Sydney also) and then the "Royal" Botanical Gardens. The gardens were well-maintained but more park-like than educational in nature. Next up: the Sydney Opera House. Stunning with the full sunlight reflecting of its tile (!) roofs and with the Harbor Bridge in the background, and water all around. What's interesting is that I found it (the SOH) to be smaller than I had expected given its outsize presence both here in Sydney and around the world. 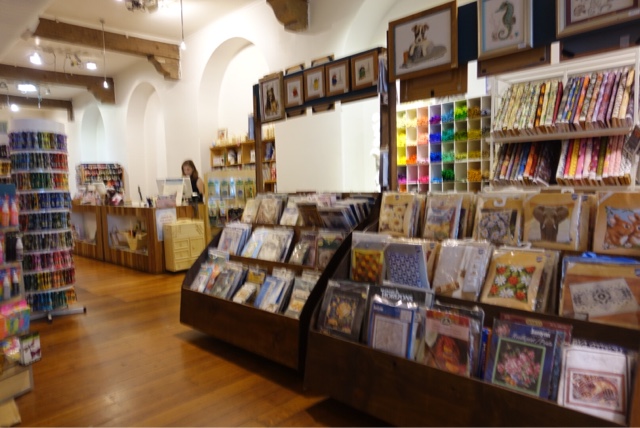 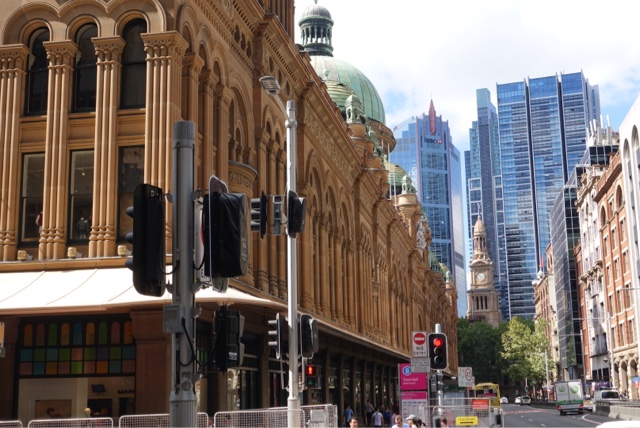 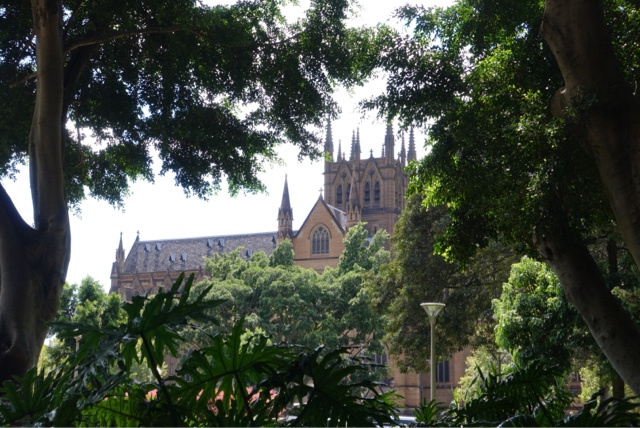 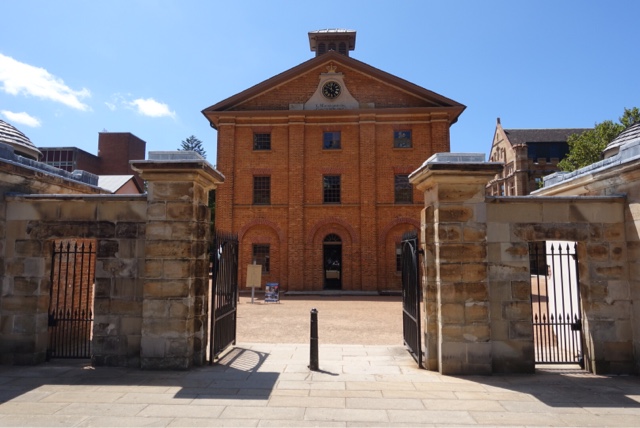 I knew there was a reason I wore pink
We stopped for a  bite to eat at a vegan counter that R discovered in a local food court before embarking on a fruitless attempt to try to find a new running outfit for me (my current shirt is giving me bloody nipple if you must know) and some Sport Wash which is a concentrated detergent that smells absolutely revolting but conquers sweat smell in work out clothes (isn't this a pleasant conversation?). Well, needless to say, I found none of what I was looking for and so we decided to return to the ship early to avoid the afternoon rush hour and to give us plenty of time to prepare for our big night out. 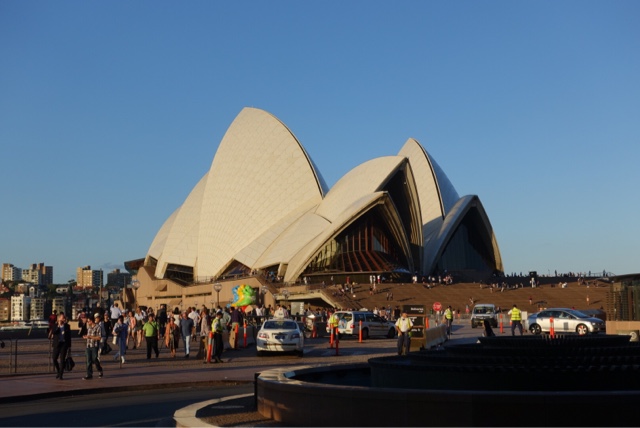 Busy night at the opera 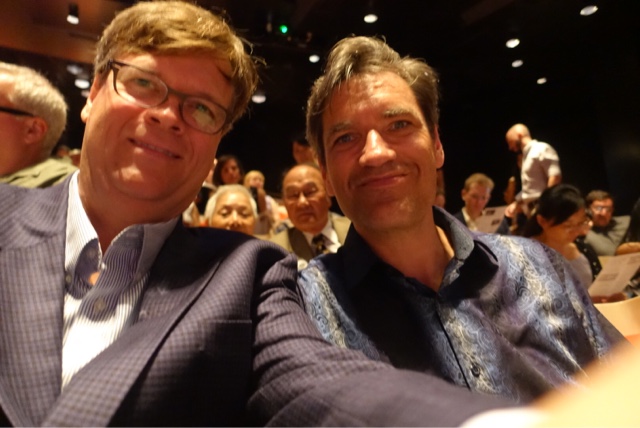 Inside, waiting for the show to begin 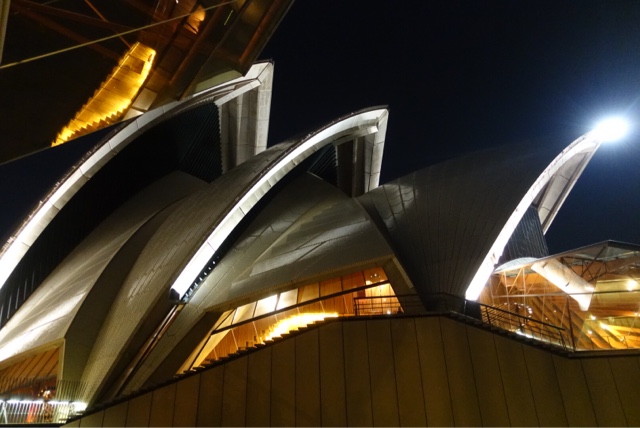 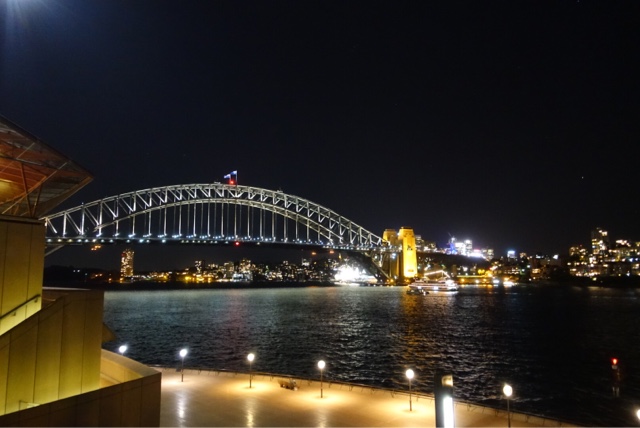 Ditto
At the opera. Yes, that's right we had tickets to see "Barber of Seville" at the Sydney Opera House. It was terrific. The singing, while perhaps not top-notch was perfectly adequate (I thought) and the production was absolutely charming. It got a little too slap-stick-y for my taste in the second act but still I really enjoyed myself. Never thought I would be able to do that -- attend an opera in Sydney. We did not, however, get back to the ship until late (11:30) and then we had to get up early for our trip to "Hazy Valley" this morning. 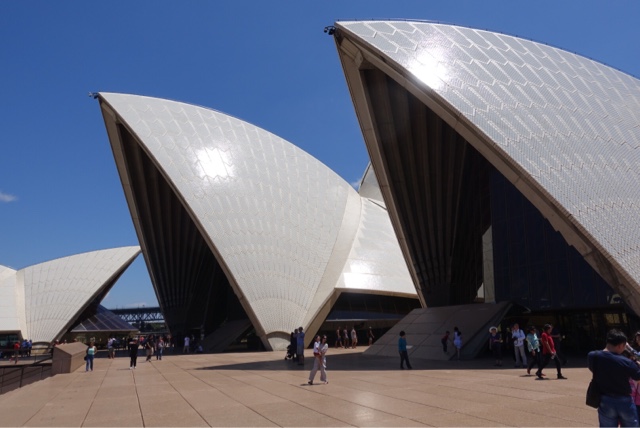 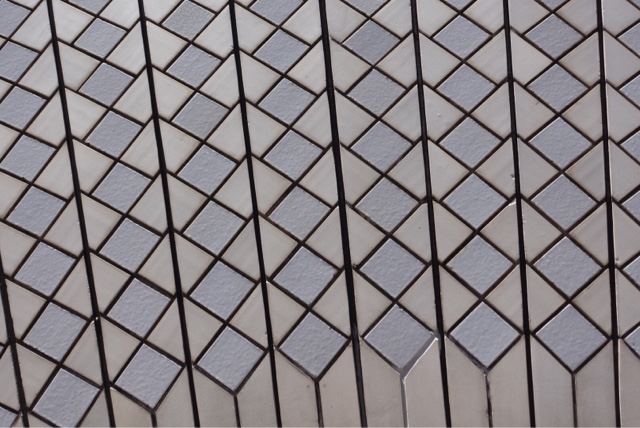 Tile roof at opera house -- this was a surprise to me
So, now we are sitting somewhere between Sydney Harbor and the Pacific Ocean having made an emergency stop to disembark a passenger who was experiencing a "medical crisis". The captain tells us that we will be here for only forty-five minutes but there was also an announcement for a medical team to be dispatched to the Lido Deck while all this was going on with the first passenger so perhaps I was wrong when I said that this cruise ship was skewing younger than I had expected. 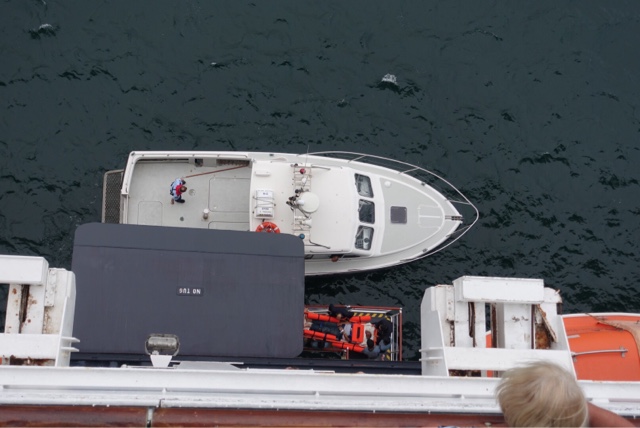 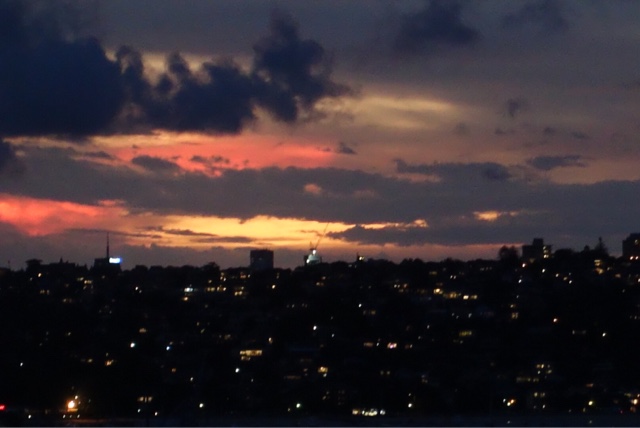 Sunset tonight as I write to you
Posted by Russell at 3:35 AM