Tuesday & Wednesday April 12-13, 2016
On Tuesday Russell took the "Ancient Corinth & Canal" shore excursion by himself. I was feeling better (no temp, less sore) but decided another day of rest wouldn't be a bad idea so I stayed on board while he ventured out. The bus stopped for a potty break after driving for an hour and a half and apparently the guide said that they would be there for twenty minutes which seemed rather a long time to Russell for a bathroom break. The guide also mentioned that you could, if you wanted, get some photos of the canal over yonder on the bridge. R was one of the last off the bus so he decided to go for the photos first. He got some good shots, used the rest room and returned to the bus. Others however chose only to use the facilities and then get back on the bus. Once everyone was on board the bus drove over the bridge (slowly) and then continued on its way. As it turns out the bathroom break and the slow drive over the bridge constituted the entire canal portion of the trip. Too funny. Everyone was expecting that there would be a little more to it plus the guide had given the impression that going to the bridge was entirely optional. What she definitely did not say, either directly or indirectly, was: "This is the canal portion of our tour".  Of course some people complained and they ended up going back to the bridge for a very short stop after visiting Ancient Corinth so that those who had not taken photos could get their shots. 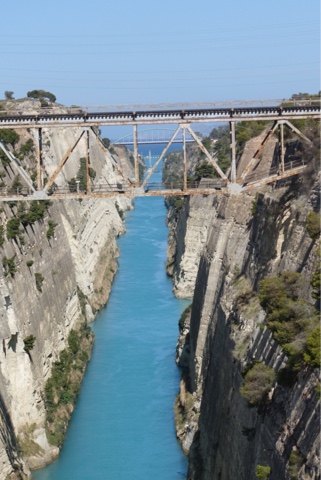 Corinth canal -- better get your photos now during the "bathroom break"!?
Ancient Corinth was the next stop after another twenty minutes spent driving. The site of the ruins is quite scenic as you can see from R's photographs. According to a brochure R picked up, the site was continuously occupied from the "Neolithic period to the Middle Ages". The peak time for Corinth was between the 8th to the 5th centuries B.C.E. 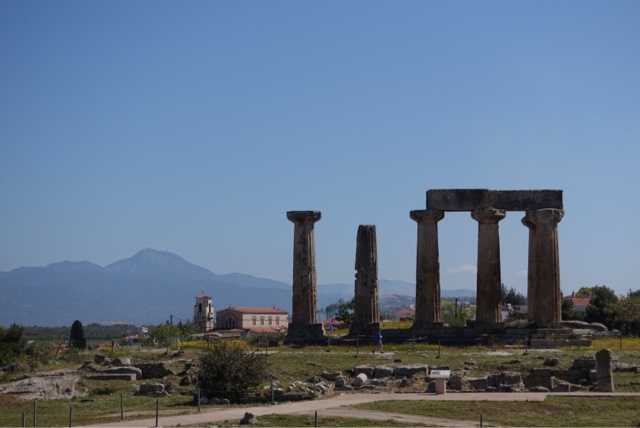 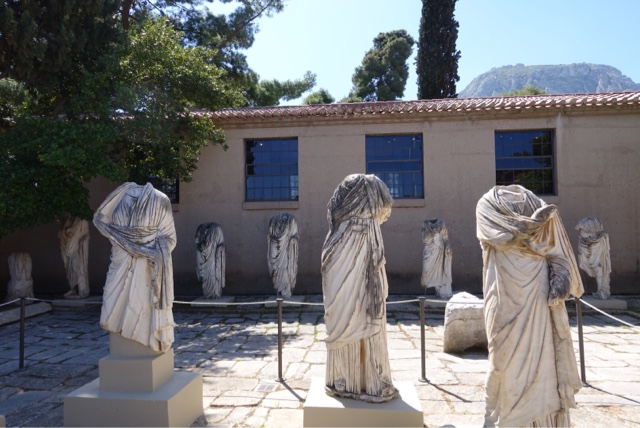 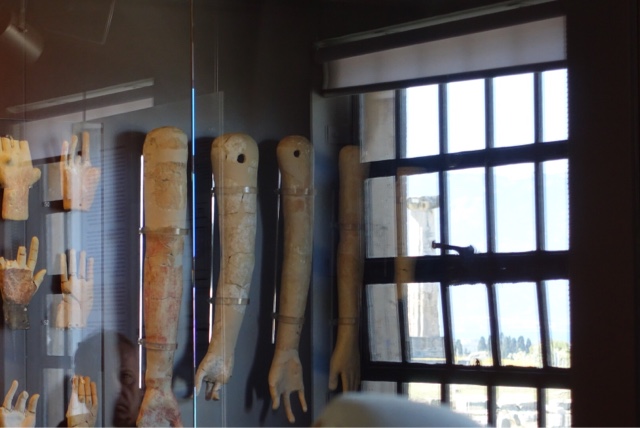 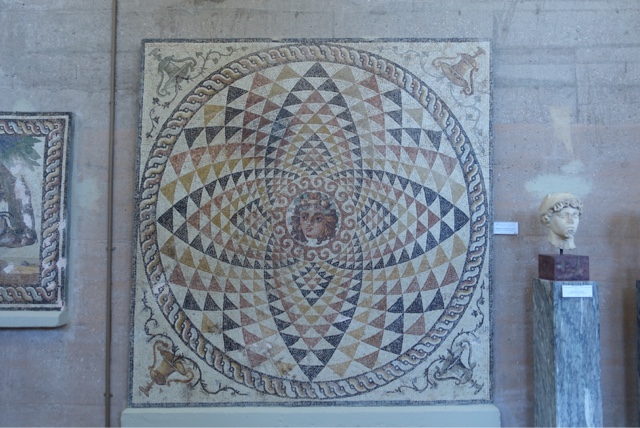 A potential needlepoint design?
There is a temple to Apollo at the center of the site. Around it grew the rest of the city. On the south side of the main agora stands the spot where St. Paul spoke to the Corinthians in 52 C.E. There is also a museum on site which displays archaeological findings from the site including statuary, mosaics, pottery, etc. 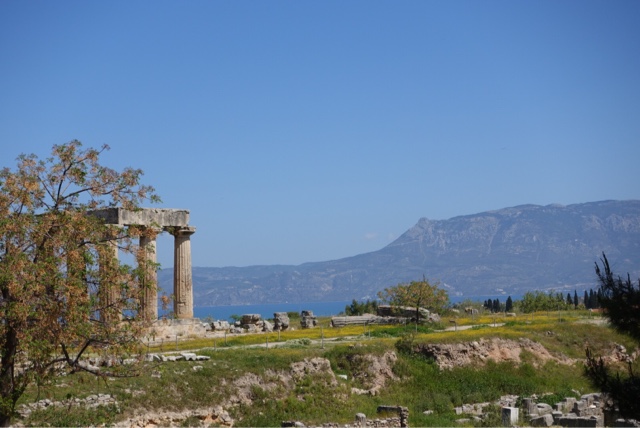 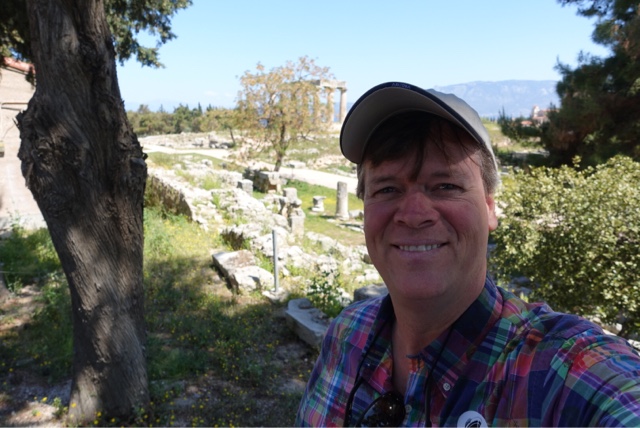 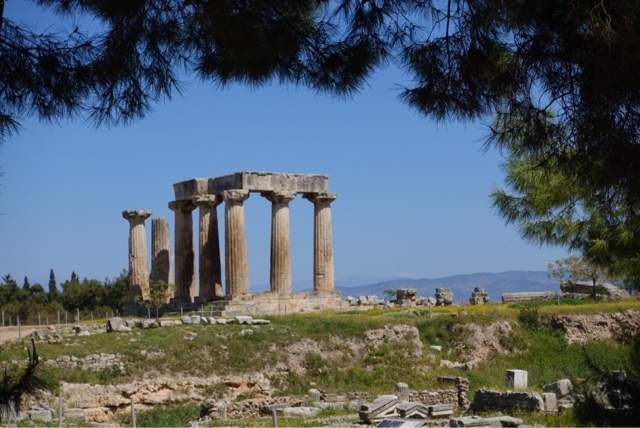 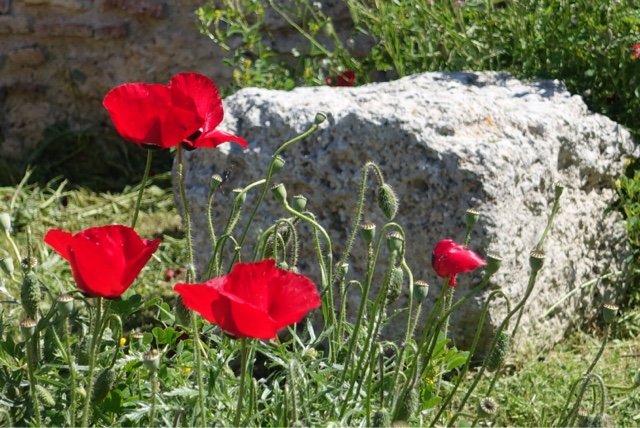 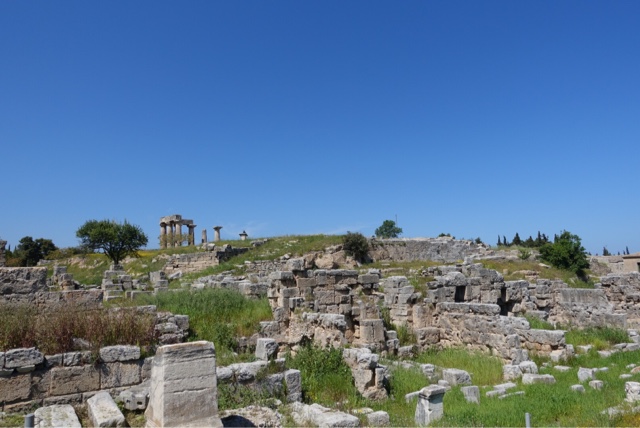 It's a bigger site than you might think
R enjoyed himself and was glad that he went. I was told by others from the tour that he was "lost" without me but I am pretty sure they were just joking!
Yesterday we visited a family-owned and run farm outside of Katakolon, Greece. Katakolon is a seaside town located near the ancient site of the Olympics which we visited last summer and so were not anxious to visit again. The farm tour wasn't too long (only three and a half hours) and started later in the day (1:00 p.m.) so it was our pick despite the fact that we didn't know what to expect. 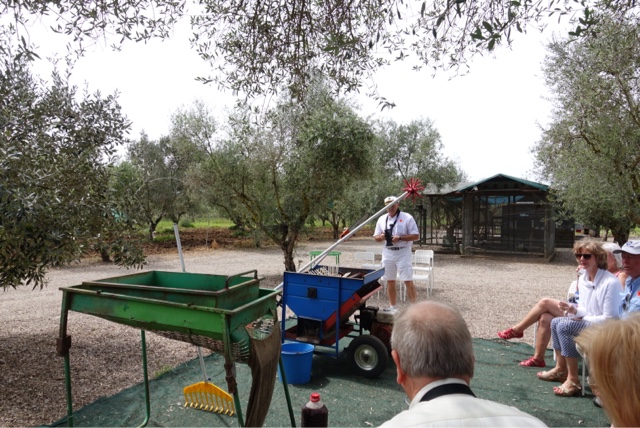 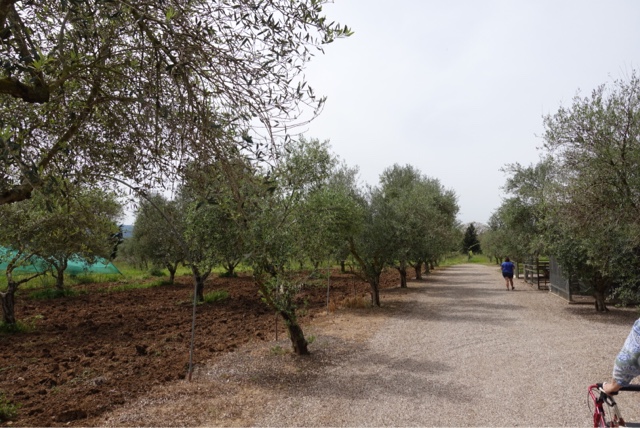 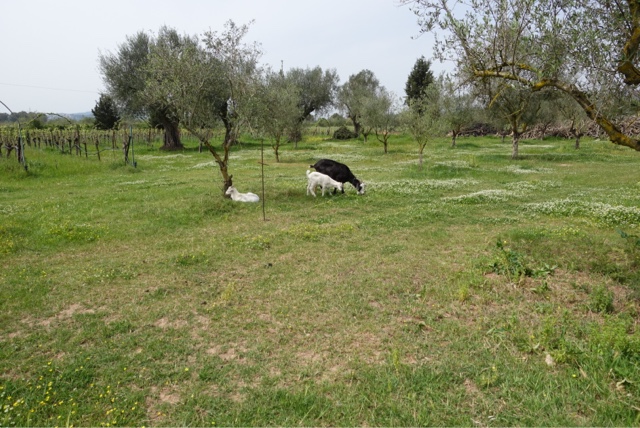 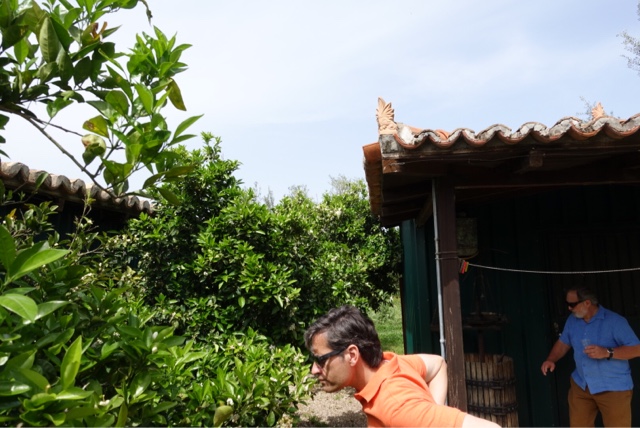 Fragrant orange blossoms
As it turned out, the tour was a pleasant surprise. The farm was located about 45 minutes from the port. It was modest in size (though the family owns 1900 olive trees in various locations nearby) consisting of some olive trees, some orange and lemon trees (in gloriously fragrant bloom), a kitchen garden, plus a veritable menagerie of animals including one quite striking "Silver Pheasant" and several seemingly friendly but clearly over enthusiastic dogs. We were greeted by the owner with a drink and a small snack before a brief but good presentation on harvesting and processing olives. Then we were free to wander the property before lunch was served. The food was quite good and afterwards there was, of course, Greek dancing. And shopping. There were several different "shops" selling a good selection of surprisingly nice items. The family also sold, as you might expect, their olive oil and wine. 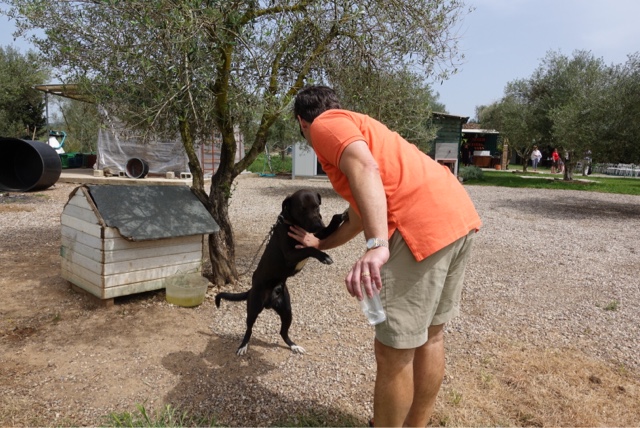 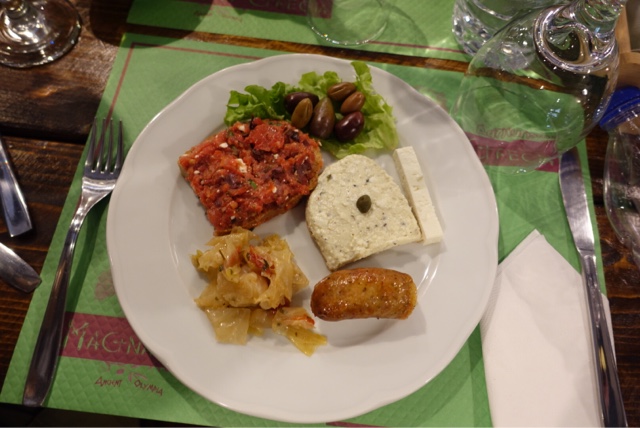 Lunch -- feta & olives of course but also a number of other yummy dishes as well
It was a pleasant afternoon but on the way back to the ship while looking out my window on the bus I saw many, many closed businesses and empty commercial property. I also saw scenes that I would expect to see in the third world such as wild-looking children shaking people down with the old windshield washing scam and a family of three riding a scooter together. As I said, I would expect to see scenes like these in a 3rd world country but not in Europe and not in the 21st century. It's sad. Greece is hurting and as usual the people who are paying the price are not necessarily the ones responsible for the crisis in the first place. 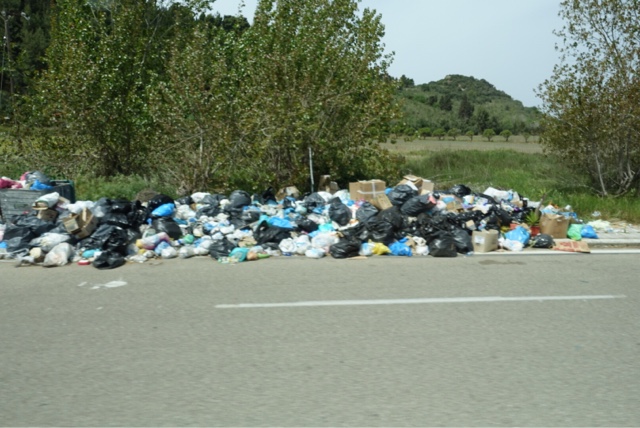 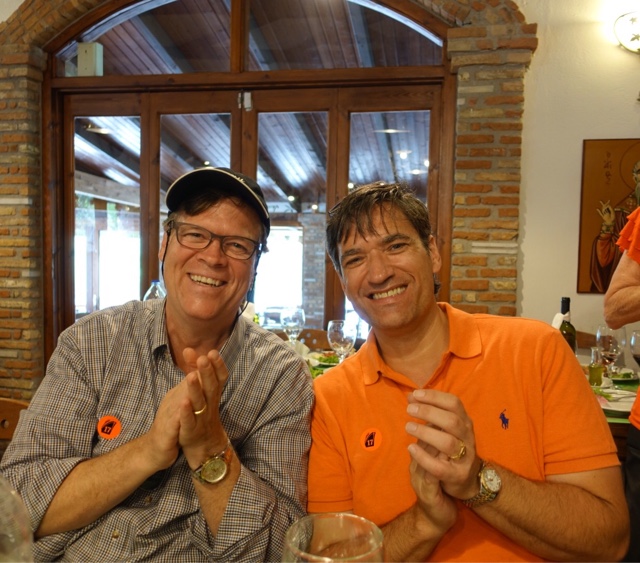 Your intrepid reporters
Rome tomorrow. Looking forward to returning for no matter how short a period of time.
Posted by Russell at 1:29 PM