Thursday March 24, 2016
Today was the day for the Taj. We drove from Delhi to Agra by bus (the same bus, driver and "spotter" we've had previously). It was a four hour drive on a new highway that mostly avoided the towns and villages along the way. I spent the time blogging and working on my Taj Mahal Christmas tree ornament. 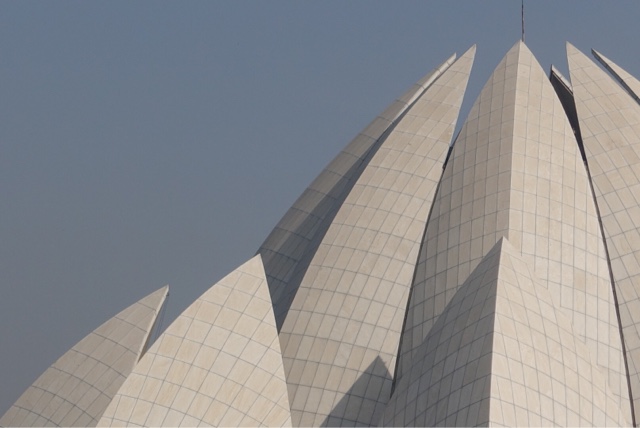 The Lotus Temple outside Delhi (we stopped briefly to view on the way to Agra)
Upon arrival in Agra, we went to the Red Fort. This was the Mughal's version of China's Forbidden City. Within the red sandstone walls are numerous marble & stone/all marble buildings that were built at different times for various purposes (audiences, concubine accommodations, King/Queen chambers, etc.). From the fort, we were able to catch a distant view of the Taj -- our first. The fort was interesting but it was hot and we were getting hungry so it was time to head to the hotel. 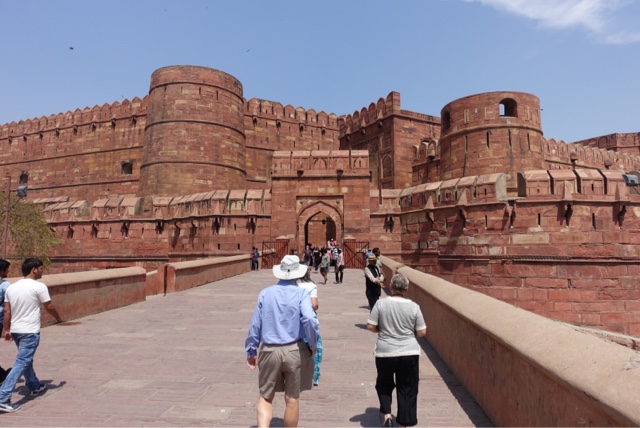 The Red Fort of Agra 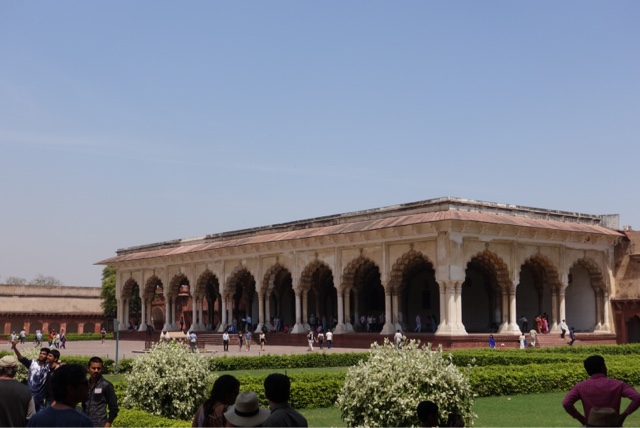 Inside the Red Fort -- audience room for the King 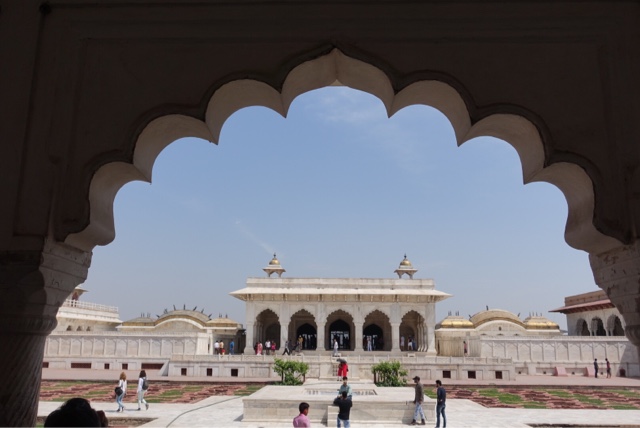 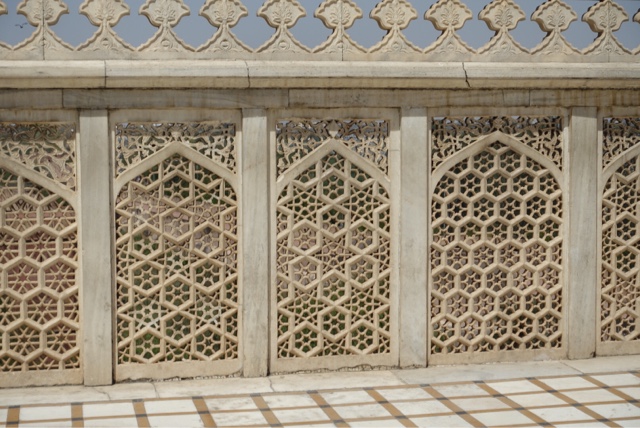 Decorative grillwork
The hotel was another ITC property though not as nice as the one in Delhi. Also our room was a designated "Smoking" room (for the second time as our room in Delhi was also a smoking  room) so you can imagine the fragrance. Anyhow the public spaces were nice, the food was decent and it was only for one night.
After eating lunch, we departed for the Taj arriving there at around 3:30 p.m. The parking lot is about a mile from the site so we got on a battery-powered small bus to take us there. Inside the entrance gate there is another gateway you walk through and then bam! There it is -- the Taj Mahal in all its glory. Wow. It certainly is majestic. And big. Larger than either Russell or I expected. And crowded. 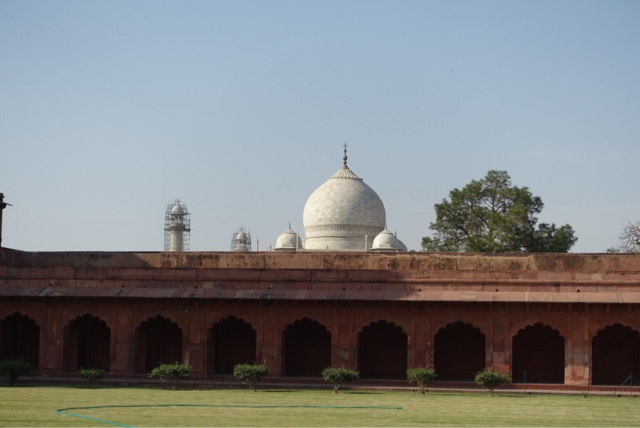 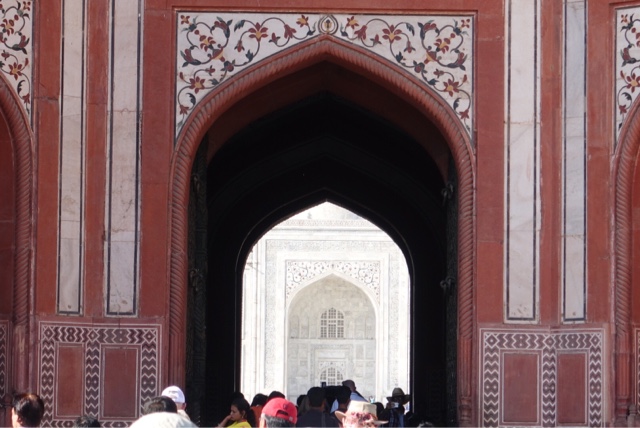 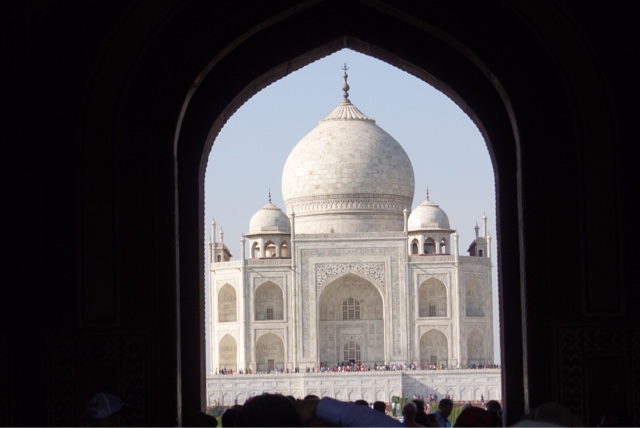 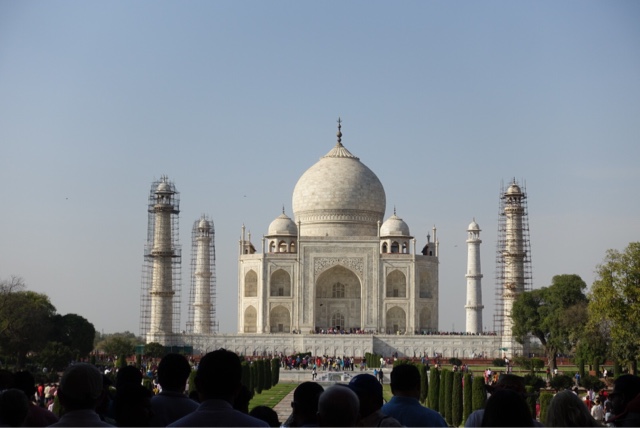 Bam!
After taking pictures for fifteen minutes we gathered together off to the side of the viewing platform where our guide was able to give us some background information. Then we posed for photographs; our guide had negotiated a price with one of the locals offering their photographic services. Next we started to walk closer to the building eventually entering the Taj itself (I had no idea that you could do that). Inside are the tombs of course but also beautiful floral motifs executed in semi-precious stones such as lapis, vermillion, turquoise, emeralds, etc. I would not however recommend going inside the Taj if you have claustrophobia issues. They really pack the people in and when we wanted to exit we had to wait for the guard to let us out. It took awhile and frankly I began to get concerned about the heat (it was very stuffy) and the crowd which was beginning to get restless. Finally we were back outside and we continued around to the rear of the building where we had a fine view of the river--yes, the Taj was built (like most Mughal buildings) close to a water source to supply the Mughals' gardens with fountains and water features. 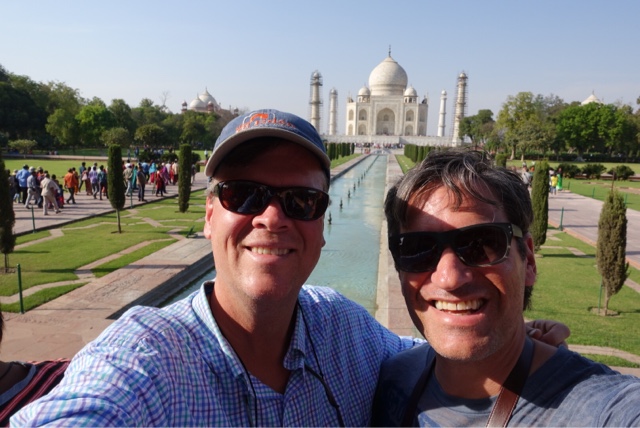 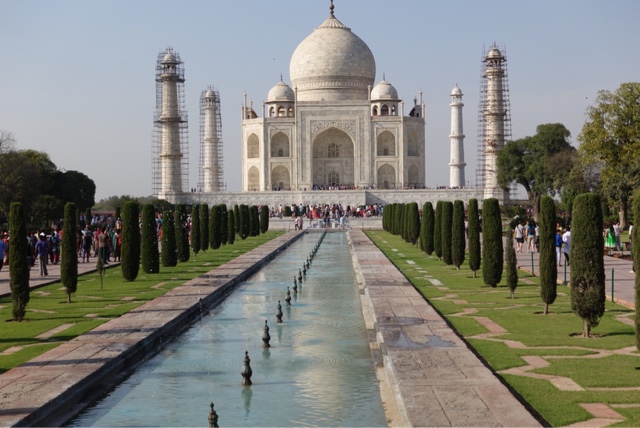 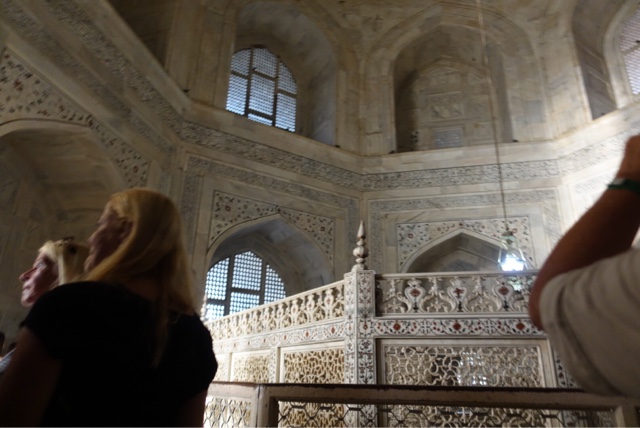 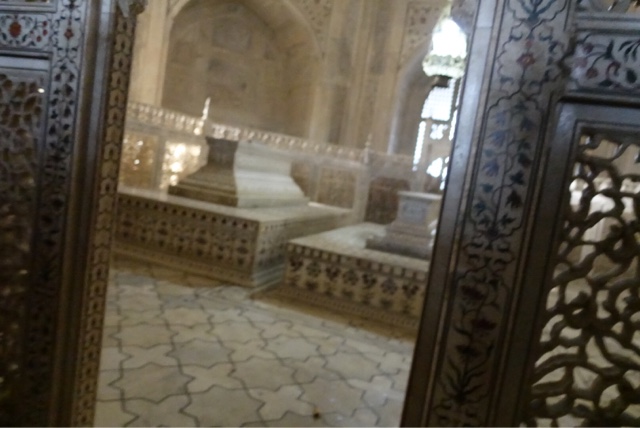 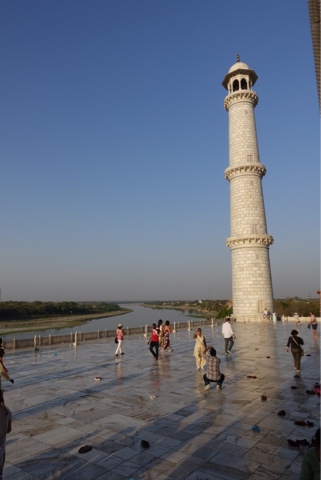 River behind Taj
It was getting to be around the time of sunset so we returned to our original viewing platform where we watched the light on the building change. The crowds were beginning to ease as the entrance gate was already closed. Finally we tore ourselves away knowing that before long we would return for a special nighttime viewing session! Yes, that's right some members of the group had requested an additional viewing session for the Taj (as our itinerary had originally indicated that we would have). As it turned out we were in Agra for the full moon and the Taj has special nighttime viewing for groups of fifty in reserved time slots of 30 minutes for days when there is a full moon. The tour company had secured for us the slot from 9:00 to 9:30 p.m. 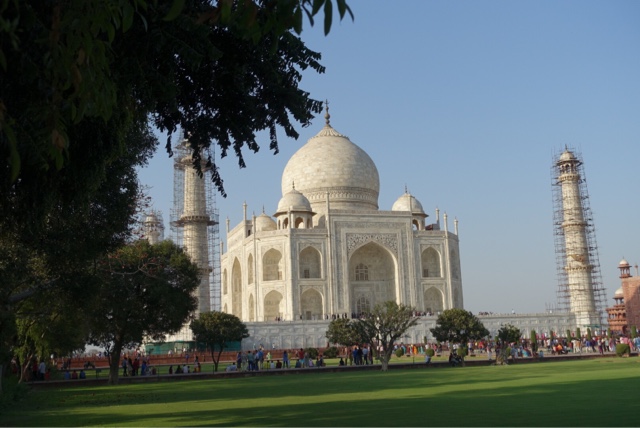 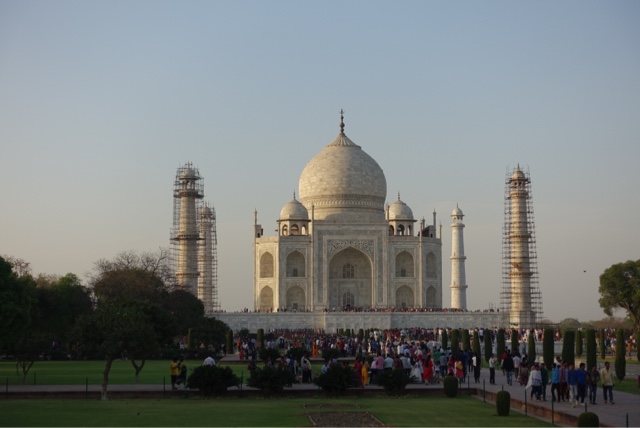 Changing light
According to our schedule we were supposed to go to a marble inlay "demonstration" complete, no doubt,  with a shopping opportunity. However since it was already fairly late and the schedule was tight, a number of us wanted to skip the marble factory. At first it seemed like they (the tour guide so more "he") would only accommodate us if we went for 20 minutes but eventually he relented and we were returned to the hotel after dropping off those who were interested (a surprisingly large portion of the group) at the marble factory.
Dinner was buffet style (again--getting a little tired of that) and we met in the lobby at 8:30 p.m. to depart for the Taj. The security at the Taj in the evening was noticeably more stringent (passport check, three (!)  pat-downs, no cell phones or water, guys with guns, etc.) but frankly I am not sure why as we had access only to the viewing platform that is furthest away from the building and we were only fifty people as opposed to the maybe 10,000 visitors earlier in the day (a supposedly light-ish day in terms of number of visitors).
The view, we had already been warned not to expect too much, was probably not what you are envisioning. For one thing, the moon wasn't quite high enough in the sky yet and for another thing the lights from the surrounding area also diluted the effect. However, there was an  orange glow low on the horizon (pollution?) behind the building that gave an interesting effect. Also the lack of people made it far more peaceful than the pushing and jostling of earlier in the day. I was entranced as I thought I saw the dome glow orange-ish, watched shadows of birds fly over the garden and listened to the frogs chattering in the swampy water feature that is up and to the left of the Taj in front of the mosque (the Taj Mahal complex actually includes three buildings. There are two red sandstone buildings on either side of the Taj itself. One is a mosque and the other is a guesthouse. They were built to provide context to the Taj and are normally left out of images of the Taj). Some people were disappointed that the moon wasn't directly over the Taj itself -- not sure whether it ever does that or not (maybe at some particular time of the year?).  Other people were disappointed that their cameras were unable to capture the scene. The lighting was certainly low and the building relatively far away. R's shots are about as good as anyone was able to get. 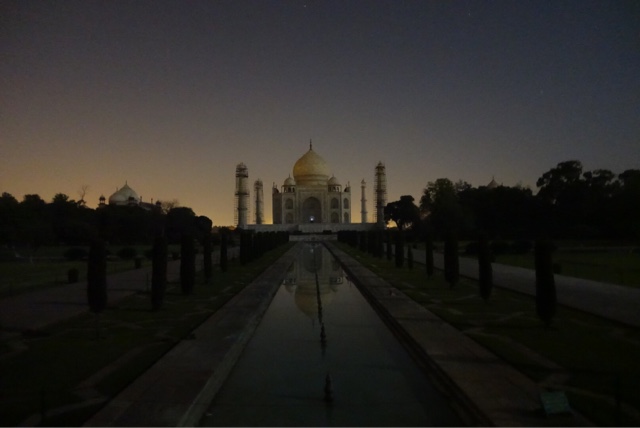 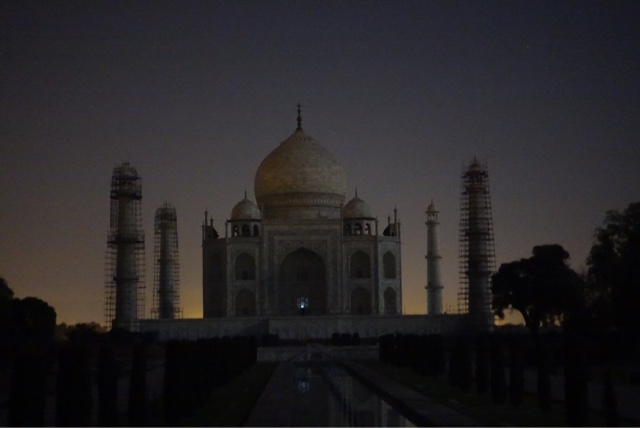 Nighttime close up
So, we've done it. Come a long way but we've seen the Taj Mahal and it was beautiful--real, honest-to-goodness perfection on earth. Not every day can you see that. Now it's on to the Pink City of Jaipur.
Posted by Russell at 12:21 AM