Today we made our first stop. Puerto Limon, Costa Rica is surely not a tourist mecca. It is visited by cruise ships because it is a convenient distance from the Panama Canal and I imagine having Costa Rica on a cruise ship itinerary helps to sell it. The port is large but very much industrial in nature. All the bananas produced in Costa Rica are shipped through this port. Also all of the petroleum that the country uses comes through this port, having arrived from Venezuela. 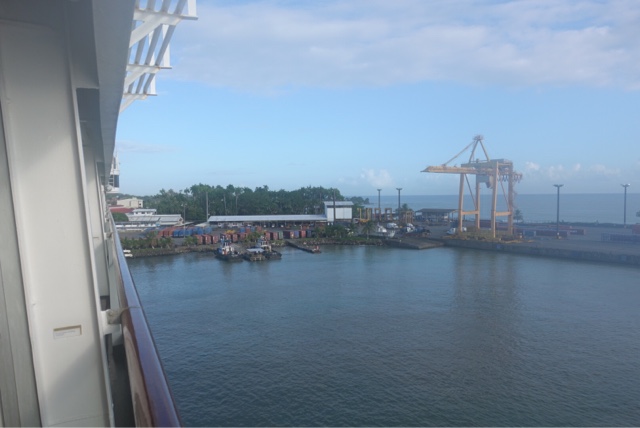 View from veranda this morning 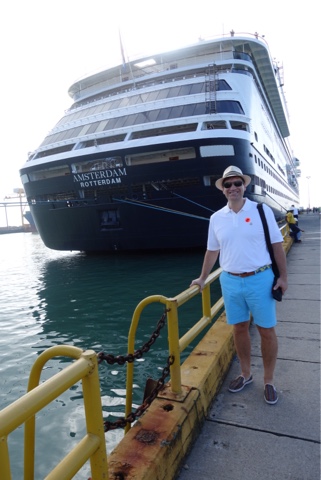 Ready to tour
The town is pretty ugly in a tropical sort of way. In some places, the vegetation is so thick it looks like if you stand in one place too long some relentless vine or giant philodendron might swallow you up. Yards are mostly dirt and there are bars on every window and balcony. The streets are wide and paved but the general appearance of the town is forlorn, make shift and lethargic. 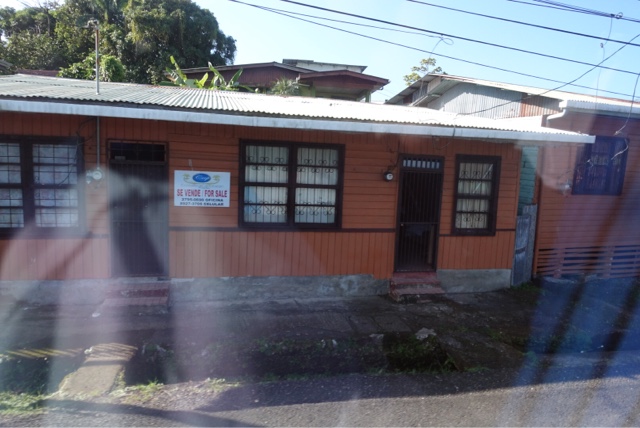 Bad Bus picture of the day 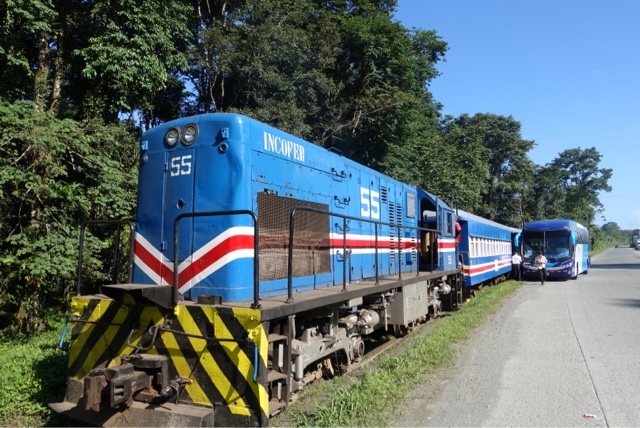 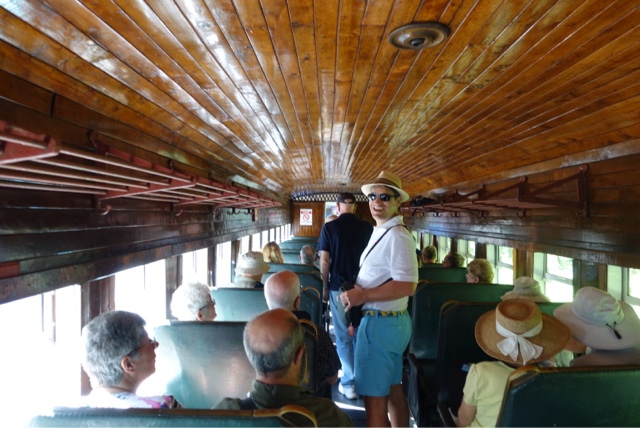 Nice antique car
Having said all that, Russell and I had a really nice day in Puerto Limon. This was largely due to the fact that we had a most enthusiastic and knowledgeable tour guide named Percy (yes that is right – Percy). For those of you that have never cruised before, there is a whole procedure to going on a “shore excursion.” Usually, one has to gather in the theatre and wait for your tour to be called. Then, there is a mad dash only slightly disguised by a veneer of civility as everyone tries first to get a sticker (your assigned bus number) and then to get to the bus so that you can obtain a “good” seat. Definitions of a good seat vary according to the individual but as far as Russell and I are concerned a good seat has no obstructions (no window pillars or curtains in the way), is usually toward the back of the bus but is far away from the bathroom (funny story – the tour guide was explaining how he wanted people to behave on the bus today and he mentioned that there was a bathroom on board but that it was for emergency “number one” use only, then he said that if you have a number two emergency or even a number “one and three quarters emergency” (never heard of that one before) to tell him and they would be sure to get you to a proper toilet.) 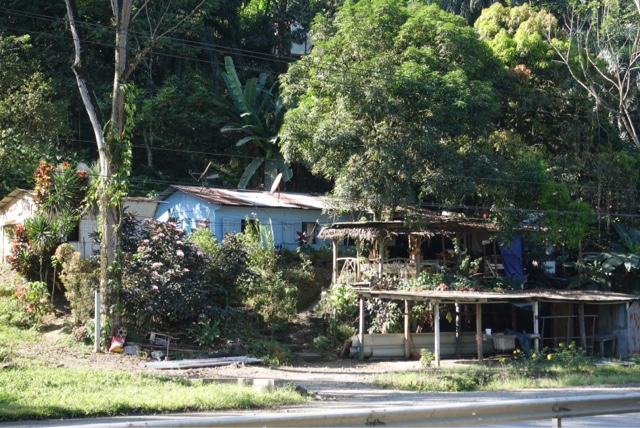 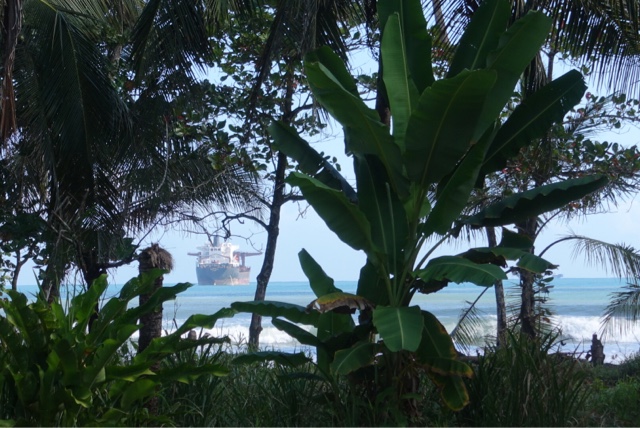 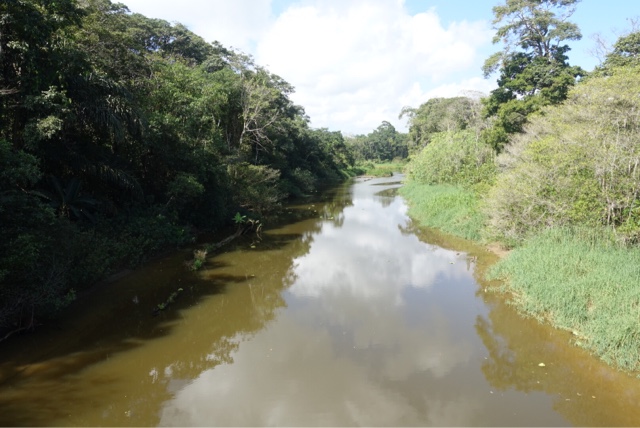 River on which we cruised
Anyways, our tour was advertised as an eco-train and jungle cruise. This may have stretched the truth a bit as the extremely slow eco-train went mostly through industrial areas of the town and ended after only a couple of miles. Still we did see along the way sloths and howler monkeys (at least I saw the howler monkeys because I had binoculars). Also northern raccoons (isn’t that weird? I mean who knew raccoons were so adaptable?). 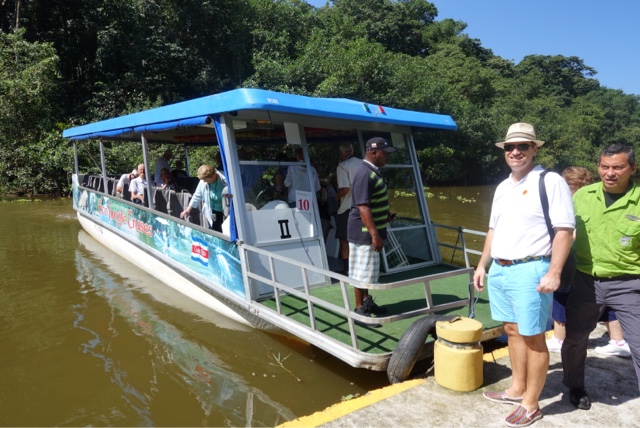 Open air but covered
After the train ride we got back on the bus and rode to the boat venue. We were served fresh fruit and beverages before boarding an open air but covered party barge type boat. We went up and down a murky river past abandoned enterprises and houses in varying states of decay. But again it was all good because a.) the breeze from the boat moving was refreshing, as it was extremely humid and eighty-five degrees and b.) because our tour guide and the boat operator were enthusiastic and sighted numerous birds (yellow crowned night heron, little blue heron, snowy egret, great kiskadee, kingfisher, oriole, vulture) also sloths (both three- and two-toe), howler monkeys, and bats. It was a successful but relatively short river cruise. 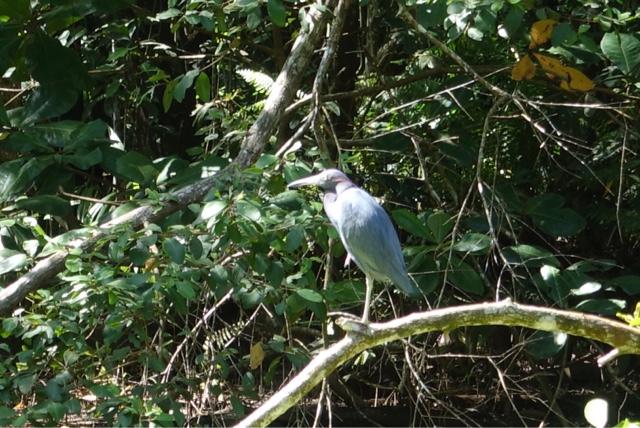 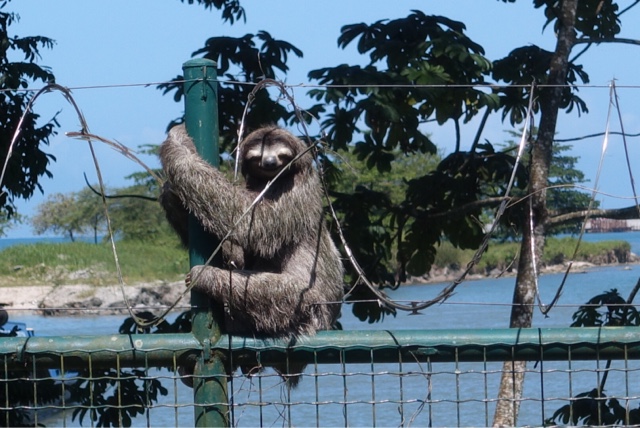 Best view of sloth was this guy who climbed up one side of a fence, navigated the razor wire, and went down the other side 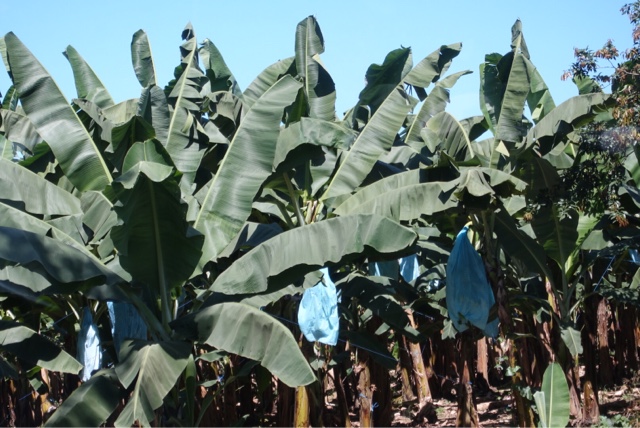 Big stalks of bananas in blue bags (used to protect fruit from bugs and bruising, also to promote ripening)
Back on the bus our last stop was the Del Monte banana processing plant. This may not sound like an interesting stop to some people but it was very interesting for Russell and I because we both enjoy behind-the-scenes looks at the way things are made. Not that they were making bananas but you get my point. We watched as the big stalks of bananas were cut, sorted, washed, stickered, bagged and packed. The jobs at the packing plant are considered plum assignments. The workers make about three dollars and fifty cents an hour and they work forty-eight hours a week for an average pay of seven hundred dollars a month (which is above the national average of six hundred dollars a month). 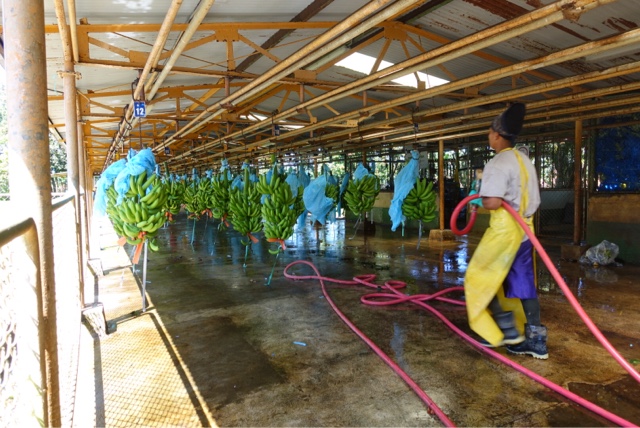 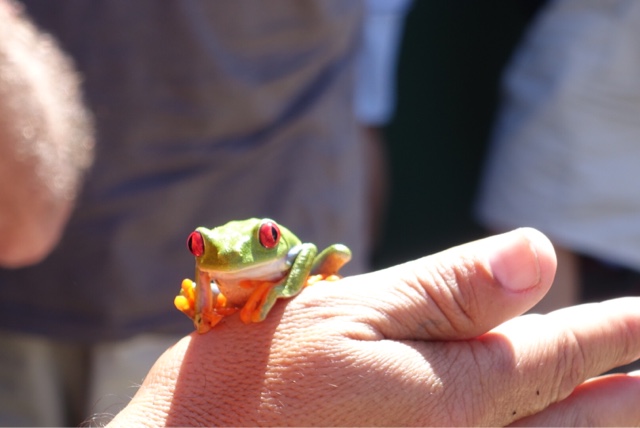 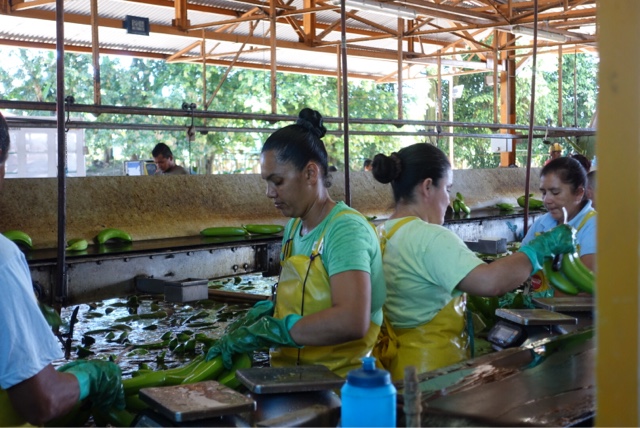 More banana processing
We were back on the ship at around one o’clock. We went to a lecture on the history of herbs and spices in the afternoon. I worked out. We did some needlepoint. You know, the usual. 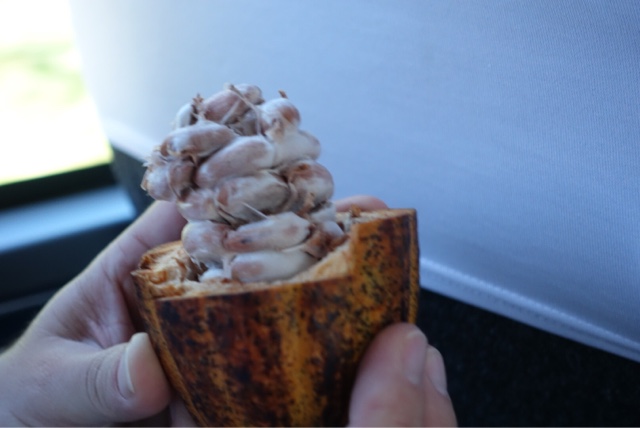 Cocoa
As I re-read this entry I am struck that what I’ve described doesn’t sound too appealing and frankly I would have to agree that Puerto Limon is not the sort of place one would come to for a vacation. But that doesn’t mean it isn’t worth visiting. I believe pretty much any place is worth visiting if only to see how people live in other parts of the world. And Puerto Limon was more than that – we saw a lot of nature, met a charming and entertaining Costa Rican (Percy) and ate a Lady Finger banana that had ripened on the tree. 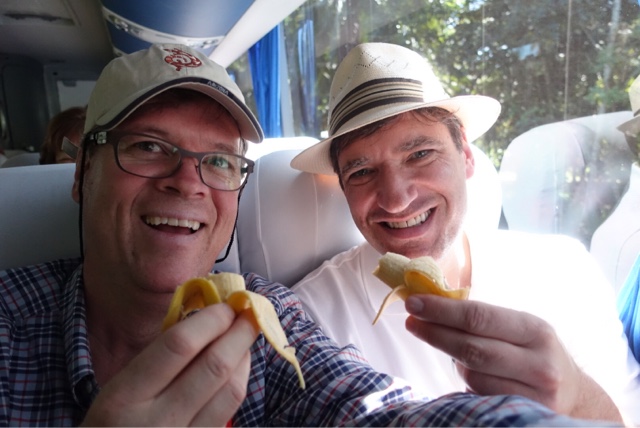 Posted by Russell and Stephen at 5:37 AM